Launched in 2017, Qtum (QTUM) is an open-source project designed to integrate both Bitcoin and Ethereum’s strengths into a single blockchain platform. Currently, Qtum is trading at $17.88 per token with a circulating supply of 98.3 million, for a total market cap of $1.75 billion. 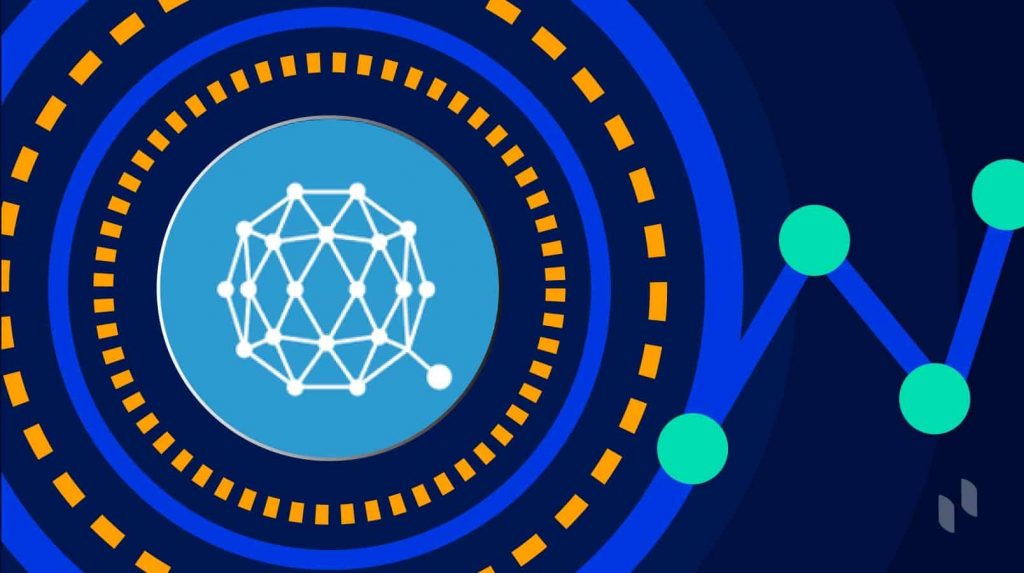 Despite continued innovation in the blockchain and crypto space, Bitcoin (BTC) and Ethereum (ETH) remain dominant in the market. However, they are not without weaknesses.

Ethereum’s powerful ecosystem and innovative technologies are often hampered by the network’s numerous high-profile security breaches. While Bitcoin is more secure, its lack of scalability has limited its applications beyond a store of value. This drawback has led to various contentious spin-off projects, such as Bitcoin Cash (BCH).

What Does Qtum Do?

Qtum claims to be the altcoin with the largest PoS peer-to-peer network, with full global nodes (1376) exceeded only by the Bitcoin and Ethereum networks. The protocol positions itself as a “business-friendly smart contract platform” with enterprise-tailored solutions such as Unita, a fully automated storage and transfer protocol.

Developed to facilitate enterprise blockchain adoption, Unita offers cross-chain swaps, decentralized storage, and one-click deployment modules at over 10,000 transactions per second (TPS). Unita aims to provide a scalable protocol that enterprises can customize according to their specific needs.

Built to model Ethereum’s ERC-20 standard, Qtum also supports the implementation of QRC-20 tokens. A variety of these tokens have been created by other developers on the Qtum blockchain, though most of these tokens don’t seem to have many practical uses. More recently, Qtum expanded support for decentralized finance (DeFi) applications, which may be better positioned to make use of QRC-20.

In late 2020, the QiSwap decentralized exchange (DEX) was launched on top of the Qtum blockchain to facilitate DeFi application development. The DEX provides an independent liquidity protocol for both QTUM and QRC-20 tokens through automated market maker algorithms. The DEX allows trading between QTUM, stablecoins such as Qcash (QC), and a variety of other pairs. More recently, QiSwap launched the Qi Token to enhance holder governance and reward early adopters.

While Qtum hasn’t seen a great deal of developer interest, the protocol recently wrapped $20 million in tokens to stimulate adoption. Qtum also offers $1 million in grants ranging from $25,000 to $50,000 each for developers looking to build or migrate DeFi applications onto the Qtum blockchain.

Who Is Behind Qtum?

The Qtum Foundation was founded in 2016 by Patrick Dai, Neil Mahi, and Jordan Earls. Dai studied computer science at Draper University and later dropped out of the Chinese Academy of Sciences to work as a product manager at Alibaba. He then worked on a variety of blockchain projects (Factom, VeChain, and others) before starting Qtum in 2016. He currently serves as the foundation’s Chairman.

The Qtum project has a number of high-profile investors, including Roger Ver (Executive Chairman of Bitcoin.com), Anthony Di lorio (Co-Founder of Ethereum and Bitcoin Magazine), and Jeremy Gardner (Co-Founder of Augur). But perhaps more notably, the project has not attracted any institutional investment despite the relative hype around it.

Like with much of the cryptocurrency market, Qtum has been on a tear since the year began. The token went from $2.74 on January 22 to $17.88 on April 22, representing an increase of roughly 521% over 3 months. The token has continued a bullish run over the past month, though it has largely stabilized over the past week. It should be noted that despite Qtum’s strong performance over the year, the token is still far from its all-time high of $100.22. 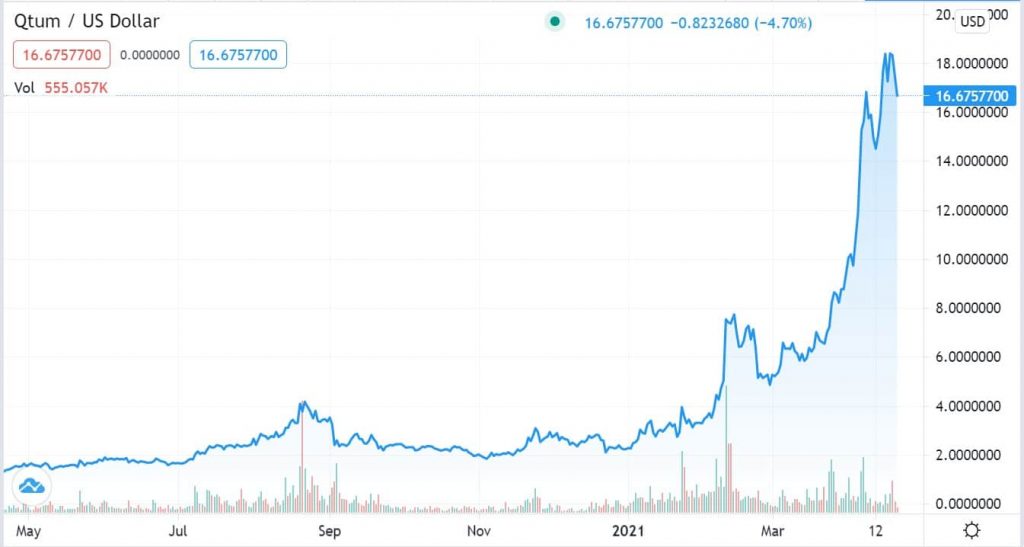 Is QTUM a Good investment?

While some of Qtum’s price gains can likely be tied to the recent QiSwap airdrop and the token’s upcoming “Neutron” update, most of its rise is likely related to exchange listings and the general trend of the bull market.

Qtum is currently ranked #70 by market cap. According to the Qtum Foundation, there is no hard cap on the supply of QTUM. An initial supply of 100 million QTUM was minted before the project went online. While new tokens can be mined through staking, block rewards are expected to halve every four years and reach zero by 2045, when the supply will reach roughly 107 million.

What is the future for Qtum?

The development of Qtum seems to have slowed significantly since the start of the year. The project made no announcements for around 4 months following the end of 2020, and observers noted that contributions to Qtum’s GitHub had largely stalled. During early April, the project returned to activity with a string of development updates and a roadmap for 2021. 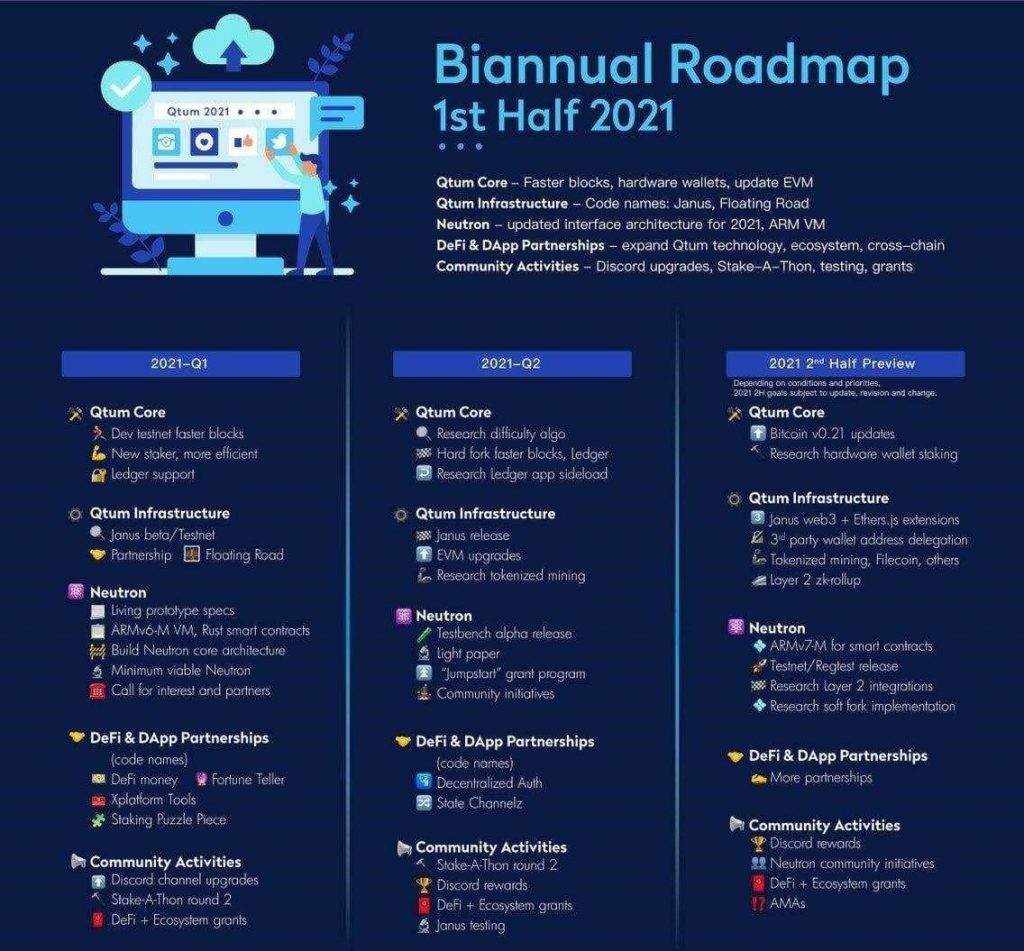 The most impressive thing about Qtum is its high interoperability. The backward smart contract compatibility and cross-chain integration offered by Qtum’s AAL technology may be a game-changer. This may be the key to differentiating the project from its competitors. While Qtum claims a much faster transaction speed than traditional networks, other scalable protocols such as Solana claim even faster performance.

Qtum’s roadmap seems to indicate a technical shift towards DeFi applications, which may be necessary considering the protocol’s inability to attract much interest from developers. Currently, the only significant project running on Qtum infrastructure is the QiSwap DEX.

Suspicions have surrounded the Qtum project since chatlogs and photo evidence surfaced that Patrick Dai previously went by “Steven Dai,” during which he served as CTO of BitBay. The BitBay project attracted controversy after an exit scam netted its founders of thousands of BTC. The coin’s launch was manipulated by two notorious altcoin groups, and allegedly Dai himself. In a statement released on the Qtum Slack channel, Dai denied all wrongdoing, claiming that he left the project because he “no longer had any time” due to his job at Alibaba. While BitBay’s Lead Developer David Zimbeck initially defended Dai as the only honest member of the project, BitBay as a whole now alleges that Dai left without any support, and stole “millions” on his way out.

Qtum is a project that has cause for both optimism and concern. While the token has the lofty goal to serve as a Bitcoin-Ethereum hybrid, it has struggled to encourage much adoption.

Prospective holders should be cautious of co-founder Dai’s checkered past and perform their own due diligence with regards to the Qtum Foundation team. None of the token’s three co-founders have much experience in the crypto space. But the project does have a few big-name investors.

It should also be noted that the project is largely funded by its initial $15 million ICO, along with a significant 20% share earmarked for the foundation during initial mining. Qtum lacks any institutional investors, which may limit the project’s ambitions in the long term and raise concerns regarding legitimacy in the short term.

While the token’s price has performed well over the past year, its prospect depends on the team’s ability to expand adoption into DeFi and push the project forward with QiSwap. Qtum will need to offer more than just theoretical improvements over ETH and BTC to prove its “business-ready” claims.

← What is MANA Decentraland: The Next Generation of Virtual Worlds
What is Chiliz (CHZ): Unleash the potential of sports tokenization →
About