What is Ethereum Classic (ETC): Where Code is Law What Is Ethereum Classic?

Launched in 2015, Ethereum Classic (ETC) represents a continuation of the original Ethereum blockchain’s unaltered history. ETC trades at $102.63 per token with a circulating supply of 116 million and a total market cap of $11.9 billion.

As their names may imply, Ethereum Classic and Ethereum were originally the same project, but this all changed when an organization known as “The DAO” was infamously hacked.

What Was the DAO Hack?

Decentralized autonomous organizations (DAOs) primarily aim to create a codified structure that allows for collective decision-making to involve all stakeholders in a project. One of the first examples of a DAO is the Bitcoin project, which is governed by consensus among the core team and mining network.

“The DAO” is the name of a particular DAO, conceived of and programmed by the team behind German startup Slock.it, a company building “smart locks” that let people share their things (cars, boats, apartments).

The organization became immensely popular and was propelled by the excitement around Ethereum. By the end of its funding period in late May, The DAO had raised over $150 million USD worth of Ethereum from over 11,000 contributors, making it the largest crowdfunding event in history.

When was Ethereum Classic created?

However, concerns around security were raised early during the fundraising process and would pick up as more money flowed into The DAO. Then, less than two weeks after the funding period ended, a security expert disclosed a vulnerability discovery that would let anyone drain improperly coded smart contracts of all their funds.

Just a week later, it was discovered that an attacker had managed to drain over 3.6 million Ethereum into a copycat DAO under their control. Soon after the news spread, the price of Ethereum dropped nearly 50% to $13 USD.

The hack posed a major risk not just to The DAO’s investors, but to the Ethereum project as well. By the time it was compromised, The DAO’s smart contract contained 15% of the total ETH circulating supply. Many worried that simply allowing it to fail would set the network back by years.

To ensure all lost tokens could be recovered, the Ethereum Foundation proposed to create a hard fork of the original blockchain. This hard fork would allow the stolen funds to be sent to an account their original owners could access. The fork proved incredibly controversial with the community, especially given that several of the Ethereum Foundation’s core members had been actively promoting The DAO.

Smart contracts were designed to function without any central arbitration, meaning that only the code executed on the contract could decide the ultimate content of the deal. The attacker had not maliciously modified the smart contract in any way. Thus, the contract worked exactly as it was programmed, and Ethereum functioned exactly as intended.

The Ethereum Foundation’s efforts to reverse the losses were seen by many as the central bailout of a project that had become “too big to fail.” The vote became more controversial when the Ethereum Foundation used a third-party tool to declare consensus with only around 4.5 million votes (5.5% of the total supply). And of the roughly 4 million ETH (87%) votes in favor, a quarter came from a single address.

While Ethereum Classic has been erroneously described by many as a hard fork of the Ethereum blockchain, it is more accurate to say that ETC is the original. One of the core principles behind Ethereum Classic is that “code is law.” This means that so long as they are programmatically “correct,” all executions are final, and all transactions are immutable. There is no trace of the DAO hack on the Ethereum Blockchain, but it remains, as with everything else, on Ethereum Classic.

Ethereum Classic has taken a radically different development path since its splinter with ETH. Given its key principle of an immutable chain, and even as ETH moves to proof of stake (PoS) with ETH 2.0, the ETC community has opted to stay with a proof-of-work (PoW) algorithm. Another core difference is Ethereum Classic’s monetary policy, which mirrors Bitcoin’s in specifying a maximum supply.

In comparison to the Ethereum network’s focus on performance and support for a sprawling ecosystem, Ethereum Classic positions itself as a high-validity, high-security blockchain. Despite this claim, the network does not seem to have fared much better than Ethereum in terms of security. Ethereum Classic had a particularly brutal month in August 2020, during which it experienced three 51% attacks.

Because they were built from the same technology, ETC and ETH still share many similarities such as Turing-complete smart contracts through the Ethereum Virtual Machine (EVM), the use of gas fees to pay for transactions, and much faster block creation times than the standard PoW algorithm. 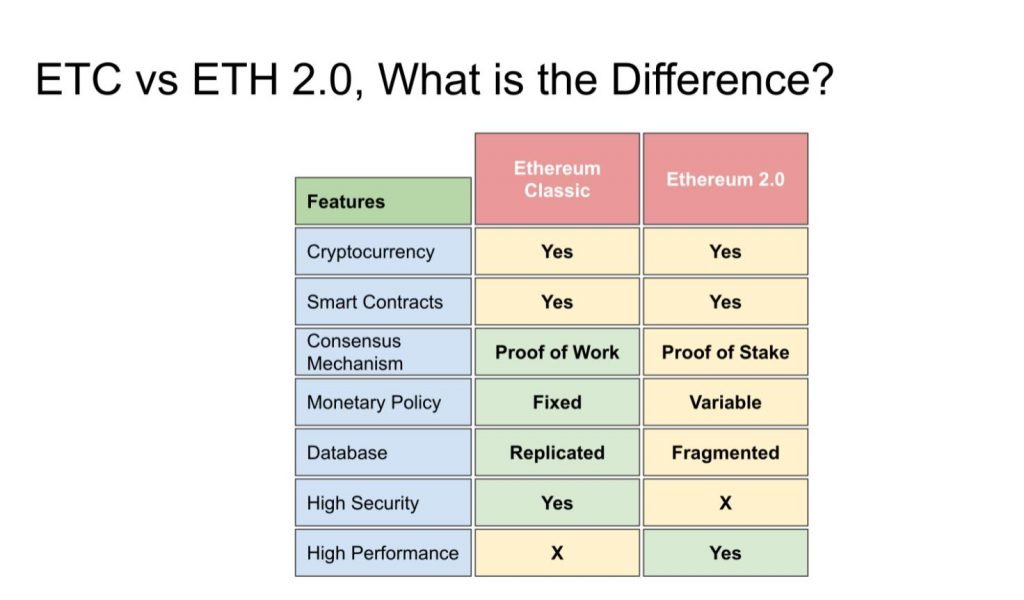 Ethereum Classic rose gradually during 2021’s crypto market bull run. The token went from $5.70 on January 1 to $14.01 by April 1, representing a rise of around 145% over 3 months. Following a significant surge in mid-April, the token has been breaking records at a steady pace, rising by another 632% from its April 1 price to $102.63. 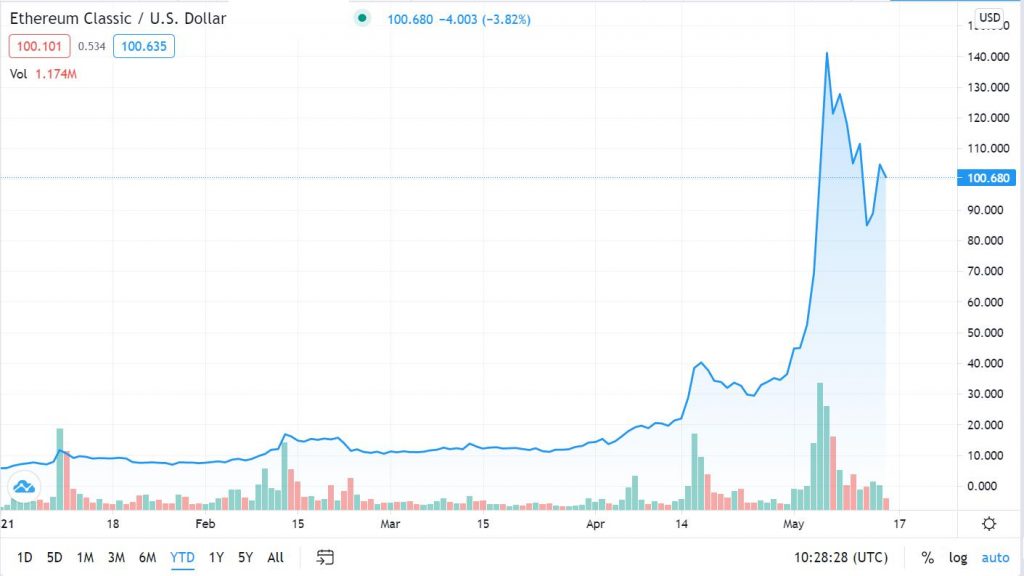 Analysts have identified several causes for Ethereum Classic’s rise: namely, a significant portion of crypto investors were looking to chase short-term gains by buying high-performing altcoins such as Dogecoin (DOGE). When Ethereum Classic had a strong week, many investors began pouring into the token, which sent its price soaring.

Also, the Ethereum Classic Trust (ETCG) run by Grayscale Investments offered investors the ability to take out loans exposed to Ethereum Classic. As many purchases were made during early 2020, and the trust has a 1-year lockup period, investors may have driven prices upward by buying ETC to cover their ETCG short positions.

Ethereum Classic is currently ranked #16 by market cap. In late 2017, the Ethereum Classic community voted to cap the total supply at 210 million. Just like Bitcoin, Ethereum Classic uses a PoW algorithm, which means miners compete with each other to validate the next block on the chain. The ETC block reward decreases over time. The next decrease, scheduled for around April 2022, will reduce the reward from 3.2 ETC to 2.56 ETC per block.

Despite its claims of offering a more secure blockchain, Ethereum Classic has not proven to be any safer than Ethereum. On the other hand, it has proven to be equally resilient in its ability to recover. Despite the many hacks, the Ethereum Classic network is running more strongly than ever and has recently experienced a large surge of new miners as its price continues to rise.

Ethereum Classic will continue to serve as a refuge for those who have grown suspicious of the Ethereum project. Unlike the Ethereum Foundation, ETC’s development team is a volunteer-only organization and has stated “it does not intend to turn the network into a for-profit entity.” The community’s dedication to the principle that “code is law” has also remained resilient, despite the various hacks that have targeted the network. 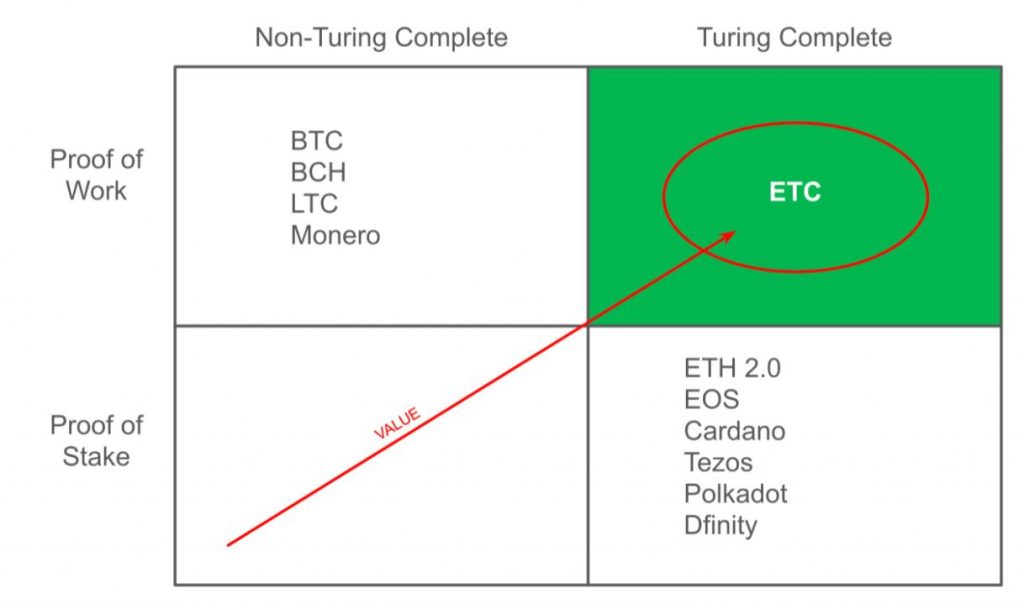 The Ethereum Classic project may stand to gain significantly when Ethereum finally migrates into a PoS algorithm. ETC will no longer need to compete with a much larger high-performance network in terms of Turing-complete smart contract functionality.

Once ETH is gone, ETC will be in a unique position to attract developers for decentralized finance (DeFi), decentralized apps (DApps), and other applications within a new and lucrative market.