Bitcoin vs. Ethereum: Which is a Better Investment?

Bitcoin (BTC) and Ethereum (ETH) are the world’s two biggest cryptocurrencies. While both are decentralized mediums of exchange based on blockchain technology, they are actually very different. BTC wants to be a real form of money and an officially recognized digital currency. ETH, meanwhile, is more like money with a microchip in it — programmable money that can automate contracts between anonymous parties, or allow applications to be built on its technology

Technically, Bitcoin and Ethereum are the networks themselves, bitcoin (BTC) is the Bitcoin Network’s coin, and ether (ETH) is the Ethereum Network’s token. To make it simple, we will use BTC and ETH to refer to each network and its coin. 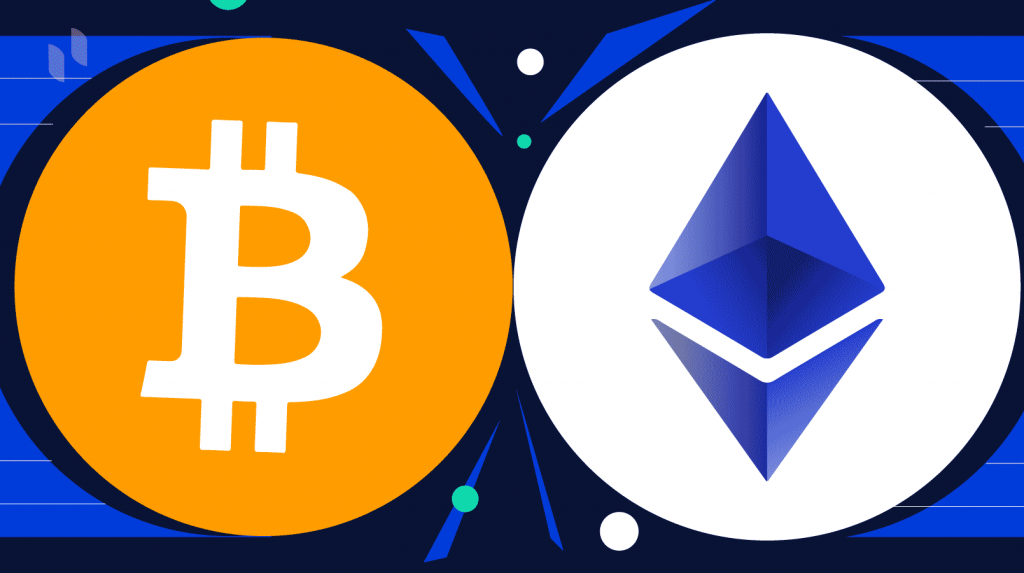 What Are the KEY Differences Between BTC and ETH?

While BTC has a fixed supply of 21 million coins, ETH has a current supply of around 107 million with no max supply. This is because BTC runs as a currency. If its supply were unlimited, it would be devalued in the way fiat currencies are when more money is printed. In contrast, ETH, as programmable money, does not aim to stabilize. Instead, it aims to grow in value and usability by creating opportunities and attracting users and companies to build on its technology. Of course, this does not mean that BTC’s value will not grow. On the contrary, as BTC’s usability increases for peer-to-peer payments between companies and individuals, it will experience increased demand and thus increased value. Thus, buying Ethereum doesn’t have as much of an impact on supply and demand as does buying a Bitcoin.

BTC can be spent in many more places than ETH. BTC is accepted by 36% of small-to-medium businesses in the U.S., as well as by massive companies such as Microsoft and Wikipedia. ETH can only be spent in a handful of places. However, this difference does not make BTC more valuable than ETH, or even more usable, since the two have very different functions.

In addition to being accepted in many places, BTC has begun to serve as national legal tender, as just seen for the first time in El Salvador. BTC’s usage and value are expected to witness a global surge.ETH, however, offers a different usage, i.e., an automation of exchanges. Its smart contracts allow for two parties to enter into an agreement — buying a house, for example, or renting a taxi. ETH not only cuts out the middlemen, thereby slashing bureaucracy, waiting time, and fees, but also strengthens security by ensuring that each exchange is automatic, irreversible, and transparent. Both cryptos have huge global usability offerings in their own fields, and they both decentralize influence and power, placing people’s assets back in their own hands.

ETH and BTC rely on different kinds of blockchain technology. ETH uses its own Proof-of-Work (PoW) mining hashing algorithm called Ethash, which is designed to be ASIC resistant to avoid centralization. BTC uses a PoW algorithm based on the Secure Hash 256 (SHA-256) — a one-way function designed by the US National Security Agency (NSA) to secure digital information.Both of these methods are secure and decentralized, but have different benefits according to the cryptocurrency’s functions. These technological differences have also led to differences in scalability and block time. A transaction may take minutes on BTC, but only seconds on ETH. ETH is preparing to move from a PoW system to a Proof-of-Stake (PoS) system, so we will likely see further technological advances there.

With rising awareness among consumers,positive environmental, social and governance (ESG) aspects are coming to dominate the investment platform. Major corporate players have started filtering through investment opportunities based on ESG factors. For cryptocurrency, this recently exploded with Elon Musk’s highlighting of the carbon footprint of mining, while as a topic it dominated at the Bitcoin 2021 conference.What this means is that as soon as miners come together to create a green and sustainable mining plan, more ESG-aware companies will invest, and with more demand for investment comes a higher-value coin.Currently, BTC and ETH both rely on PoW mining, which means high carbon emissions. BTC presents the bigger environmental challenge. ETH, meanwhile, has a much smaller carbon footprint. Moreover, its plan to move from a PoW system to a PoS system constitutes a serious move toward conforming with ESG values. By requiring validators to stake their coins in exchange for rewards for positive validating behavior, a PoS system will remove the need for mining altogether, reducing energy costs by nearly 100%. Many analysts believe this move toward sustainability will drive ETH’s demand past BTC’s.

How Have Recent Events Affected BTC and ETH?

Bitcoin has just taken a hit due to Elon Musk’s comments on ESG values and China’s declarations on tackling digital currencies. At the same time, its recognition as a national currency in El Salvador has given it a boost. El Salvador may not be a world superpower, but with 70% of its population being unbanked, it yields huge prospects for the coin. If just 1% of BTC’s supply comes into the hands of El Salvador residents, the country’s GDP will grow by 25%. That is an economic boost that other countries will notice.

As cryptocurrencies generally tend to reflect the major changes in Bitcoin, Ethereum was also affected by Musk’s comments. However, global confidence in Ethereum’s technology has jumped recently. In April of this year, the European International Bank (EIB), which partially funds the 27 European member states, issued two-year bonds worth over $120 million on the Ethereum blockchain. If the EIB isn’t enough validation, one of the partnering banks was also Goldman Sachs, a well-known institution.

China, on the other hand, has made moves to curb domestic cryptocurrency mining. In May of this year, citing financial stability and emissions reduction as motives, the government cut electricity to Chinese mining companies, which account for a large percentage of the world’s mining capacity. This resulted in BTC’s value plummeting by 30% and a $1 trillion loss across the industry. However, this turn of events has sparked a mass exodus of miners to other destinations with cheap electricity, such as Texas and Kazakhstan, as well as a reshuffling of miners. On a positive note, this could lead to further decentralization of BTC, but on a negative, this will mean a decrease in the percentage of renewable energy used for mining.

BTC vs. ETH: Which is a Better Investment?

At the time of writing, BTC is worth over $41,000 per coin, with a market cap of nearly $800 billion. Meanwhile, ETH is worth roughly $2,600 per token, with a market cap of around $300 billion. ETH still has a long way to go before surpassing BTC, and despite its movements toward sustainability and its growth in applicability, no one can be totally certain about its future. However, as shown in the charts below, both cryptocurrencies have dived and resurged before, generally seeming to crash upwards. 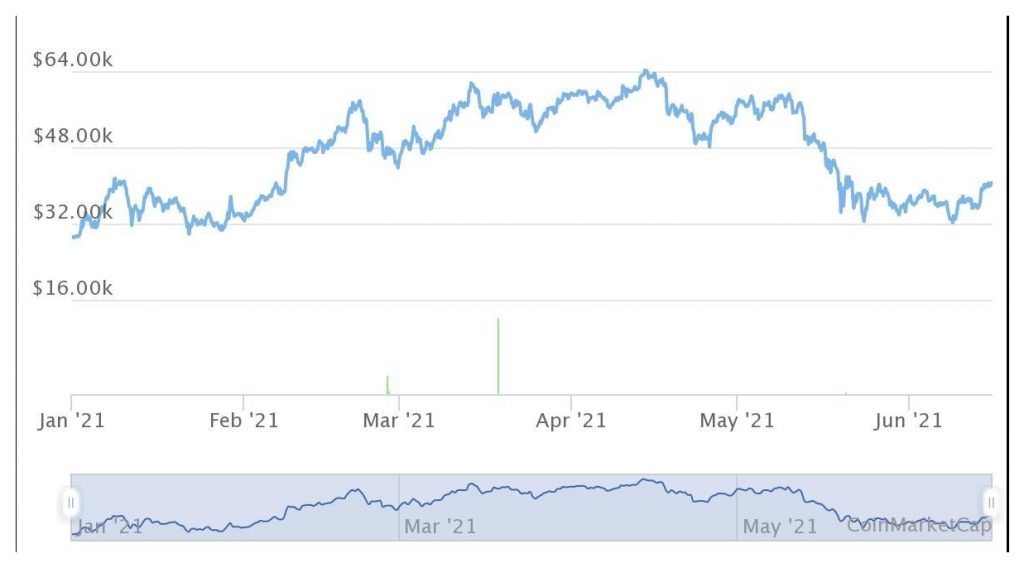 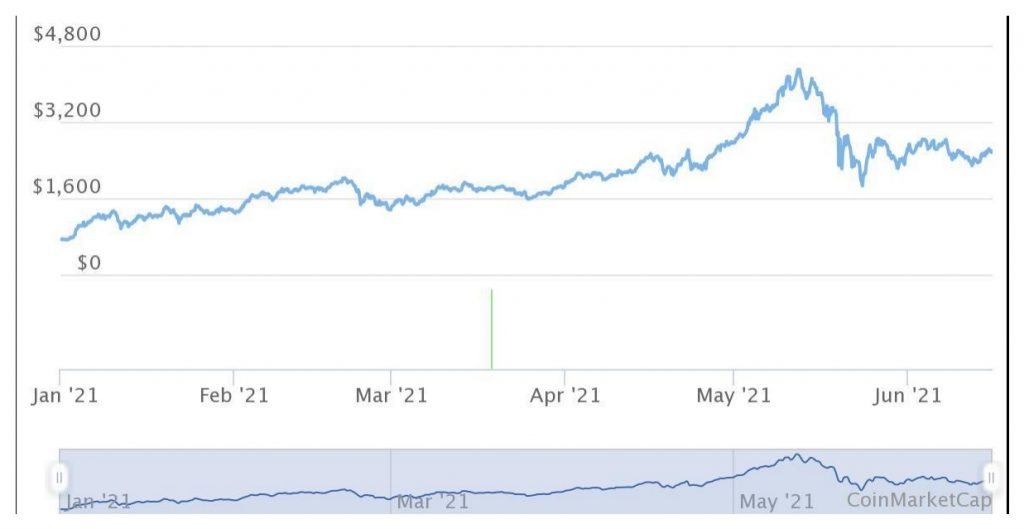 In a climate of distrust in government institutions and an increasingly technologically savvy population, we could see a rise in value for both these major players. On the other hand, the new generation of consumers is increasingly eco-conscious, including large global players such as China, as discussed earlier. Related events and sentiments could therefore threaten BTC and ETH’s value if they can’t comply with ESG values. ETH is ahead of BTC in this regard, but it’s a work in progress.

That said, the cryptocurrencies have begun to recover after these recent hits from Musk and China — a reminder that fluctuation is normal when it comes to new and radical technologies. Realistically, it will take more than those factors to crush technologies as resilient and promising as these.

Due to basic supply and demand principles, BTC’s limited supply of 21 million coins will keep its value high — probably consistently above ETH’s. However, ETH, whose supply of tokens is much higher and essentially uncapped, locks up some of its tokens in smart contracts which are then used to build upon the network. This means that despite BTC’s higher demand than supply, ETH’s tokens can still surge in value and compete with BTC.

In terms of market cap, however, ETH’s adaptability and plans for an environmentally friendly future could be very powerful. Even if its coin value remains below BTC’s, many analysts predict that its market value will surpass BTC’s.

Overall, BTC and ETH look set to continue growing. Most notably, Ethereum’s eco-friendly changes could lead to an explosion in value, and Bitcoin could be the payment of the future if more countries adopt it as legal tender. In any case, we may be looking at a revolution of business as we know it.