What is the Quant Network: Interoperability Between Blockchains

The Quant Network was launched in 2018 with the goal to connect blockchains and other existing networks all across the world. The Quant Network’s token Quant (QNT) trades at $80.15 per token with a circulating supply of 12 million QNT, for a total market cap of $969 million.

What Is Quant Network?

Quant Network was created to combat this and facilitate interoperability between blockchains. It uses its Overledger OS, an operating system that enables applications to work across different blockchains, which allows for seamless communication between multiple networks.

Distributed Ledger Technology (DLT) is used in almost every industry today for different reasons, but because it is a complicated technology that doesn’t integrate with different generations of systems, it can’t reach its full potential.

The Quant Network is a simple and secure platform that makes interoperability convenient by connecting any network to any DLT in the world. However, it is a closed-source project that requires a license to be used.

The Overledger OS doesn’t just connect blockchains, but many types of DLT, database, CRM system, and more. It does not require any additional blockchain, and this is what makes the process smooth and seamless.

These networks are connected through a single API, which means developers can have access to these DLTs in a very short amount of time. This is because the infrastructure required to run them is already there.

The Quant Network also allows people to create smart contracts in blockchains that don’t even support them (like Bitcoin). People can also use Quant to create multi-chain apps, also known as mApps. These mApps are able to run on multiple chains simultaneously because they require different features from different networks.

To access the Overledger OS, users and developers both have to buy the native token Quant (QNT). Quant is also used to encrypt and sign transactions and transfer digital assets between different chains.

How Does Quant Network Work?

The details of how the Quant Network works haven’t been released to the public. This is because it is not an open-source project. What we do know is that it is not a blockchain. The Quant Network is an ecosystem that contains the following elements:

The Overledger OS is the heart of the ecosystem. It is an interoperable blockchain OS that lets its users access multiple chains simultaneously. It is “hyper-decentralized,” meaning it runs and stores data on multiple blockchains instead of just one.

It is unclear how exactly the Overledger OS works, but it is based on Google’s open-source Kubernetes technology. This technology allows an app to support a large number of users without crashing by automatically fixing any error it encounters.

Users have to pay an annual licensing fee. Buying this license lets users create mApps on the OS. These are different from dApps, which are built on a single blockchain (mostly Ethereum).

Different features of different blockchains can be used to run these mApps. For instance, you can use Solana for its speed and Bitcoin for its privacy capabilities.

The Overledger Network Marketplace lets people buy and sell mApps and their data. Transactions on this marketplace are executed through the Treasury, smart contracts built on Ethereum. The Treasury takes a small fee that goes to the Quant Network.

Enterprises use the Treasury to pay in fiat for licenses which are then used to buy QNT tokens. These tokens are locked in the Treasury for the duration of the license.

Finally, the QNT coin is an ERC-20 token that is used to access the Overledger platform in the Quant Network ecosystem. 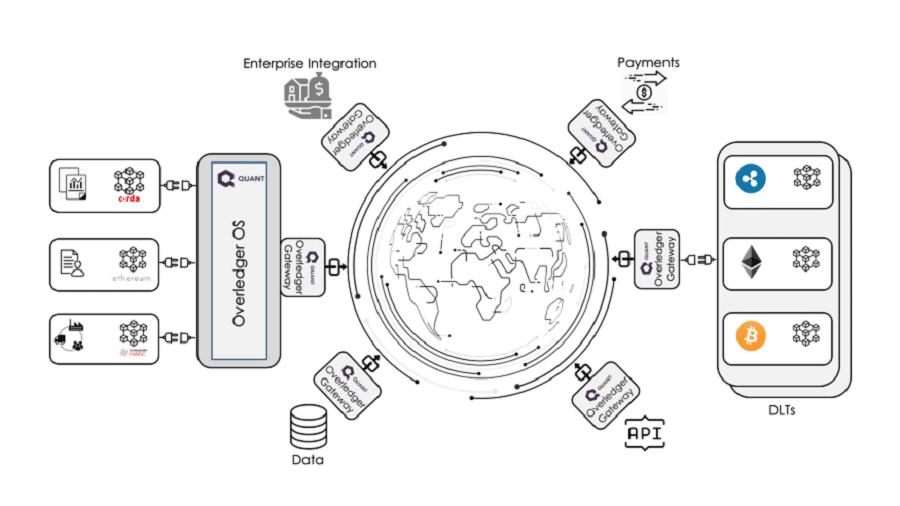 An overview of the Overledger Network. (Source: Coinbureau.com)

Who Is Behind Quant Network?

The Quant Network company was founded by Gilbert Verdian in 2015. He came up with the idea for a system that allows for interoperability between multiple blockchains while working in the healthcare sector. Before founding the company, Verdian held prestigious positions at companies like BP Oil, Price Waterhouse Coopers, and Ernst & Young.

Verdian believes that interoperability will usher in a new age of innovation and productivity. For example, KYC compliance would no longer be necessary if there are shared databases that have all the information already in them.

“A good example,” says Verdian, “is the recognition of a person’s identity by one entity on a blockchain that will be recognized and understood by every other blockchain and every entity connected to those.”

Verdian’s vision of interconnected blockchains might seem a bit ambitious, considering his own website says blockchain interoperability was thought to be irrelevant, and it was believed that a single blockchain would take over the market, instead. Despite that, Verdian realized how important interoperability would go on to become for mass adoption to happen, and he has been at the forefront of the issue since then. Verdian believes Quant Network is a unique project, which is why most of the technology it uses is patented. 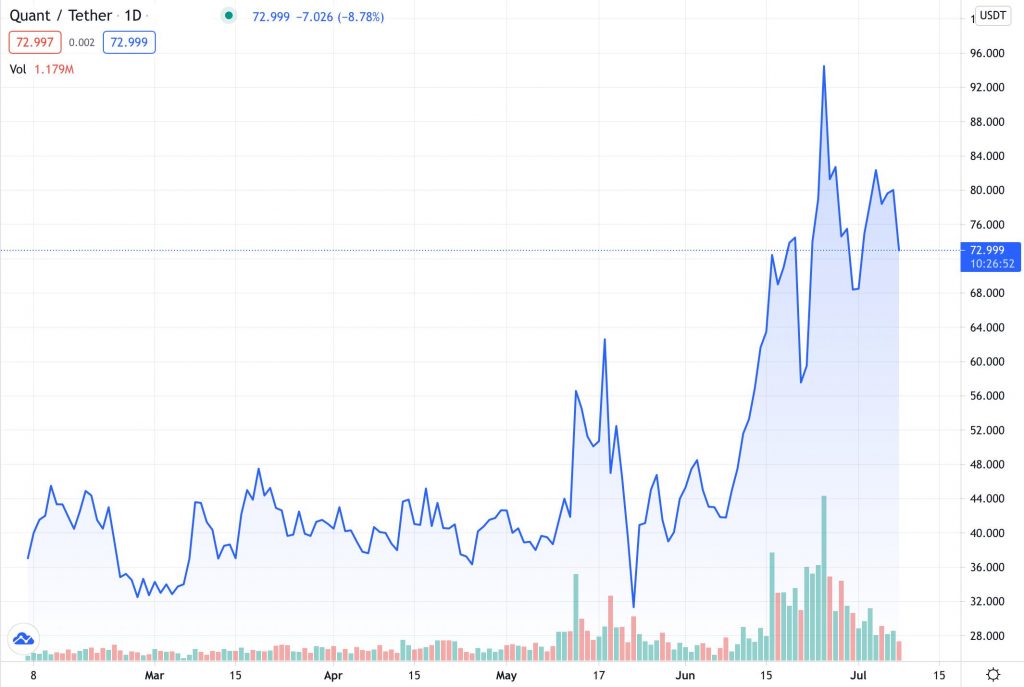 Despite that, however, it seems to be quite stable considering most other altcoins in the market haven’t been doing very well.

Currently, QNT’s CoinMarketCap ranking is #75, and it has a market cap of $970 million, with a circulating supply of 12 million QNT.

QNT will probably see an increase in its price, because what the Quant Network is doing is unique and innovative, and it will encourage mass blockchain technology adoption.

What Is the Future for Quant Network?

Quant Network’s goal is to create an ecosystem that will link all blockchains and DLTs together, making it easier to transfer data and apps from one network to another. The Quant team doesn’t just want to restrict itself to crypto — it also plans to introduce its technology to other sectors, such as healthcare, supply chain, and financial services.

Verdian wants Quant to be the Microsoft or Apple of blockchain. He wants to use his connections in the public and private sector to introduce the Overledger OS as the solution to interoperability for governments and central banks.

Verdian is clearly ambitious and has huge plans for Quant. He has been pushing for companies to adopt blockchain technology since he first heard about it in 2009.

Quant Network’s ICO was held in 2018, but it only managed to raise $11 million, selling only 10 million tokens despite a hard cap of $40 million. This caused some problems in the beginning, as the team wasn’t able to reach most of their milestones.

In July 2020, however, they received an undisclosed amount of funding from Alpha Sigma Capital, which helped them achieve the goals that they had outlined in their roadmap.

Quant Network doesn’t have a lot of competition right now, which might make it easier for them to become the dominant player offering a solution to the interoperability problem, but it also means that what they have set out to do may not be as easy as it seems.

QNT is currently not listed on most major exchanges, which makes one wonder what Quant Network’s plans are for it. What will happen to QNT once the Overledger OS goes mainstream? This is something only time will tell.

Gilbert Verdian, the founder of Quant, is passionate about this project and he has been a proponent of blockchain technology for many years. The issue of interoperability has been around in almost every industry for a very long time.

Quant Network is working with governments, central banks, and various other organizations to revolutionize the way everything functions. Quant Network isn’t a blockchain, but rather an ecosystem that aims to connect blockchains to every other network that exists.

Quant Network is solving a problem that will definitely push for mass blockchain adoption and will change the way data is recorded.