Is Crypto Adoption Gaining Speed? A Deep Dive Into Its Adoption Curve

We’ve all witnessed crypto headlines go hot and cold (2017-2019) and back hot again (2020-2021), but how many of those headlines have led to real crypto adoption? It’s a conversation worth having, especially as the industry seeks to move forward by attracting even more people to the world of cryptocurrencies, DeFi, NFTs, and the Metaverse. But there’s another challenge: how do you measure crypto adoption? How Do You Measure Crypto Adoption?

There are many ways to measure cryptocurrency adoption, but at the end of the day, it refers to getting more people to buy cryptocurrencies, invest in them, and use them more frequently in creative ways in their daily lives.

Although the crypto adoption rate has increased in recent years, it still remains unclear what exactly continued adoption will look like. For example, beyond assets to invest in, increased crypto adoption could be e-commerce giants like Amazon and Walmart adding Bitcoin payment options to their shopping carts, it could be employers paying salaries in cryptocurrencies, households paying their bills with crypto, or receiving government stimulus or other benefits in cryptocurrencies. There are numerous touchpoints for cryptocurrencies to insert themselves into the real economy.

Crypto data and research intelligence firm Chainalysis recently released two reports that detail global DeFi and crypto adoption. Their conclusion was clear and straightforward, after a year of huge growth for cryptocurrency markets and more industry attention, adoption is increasing dramatically and there are no signs of slowing down.

What Is An Adoption Curve (S Curve)?

5 Stages Of The Adoption Curve

The five segments are featured in the picture below. First, are the Innovators, second are the Early Adopters, third is the Early Majority, fourth is the Late Majority, and fifth are the Laggers. 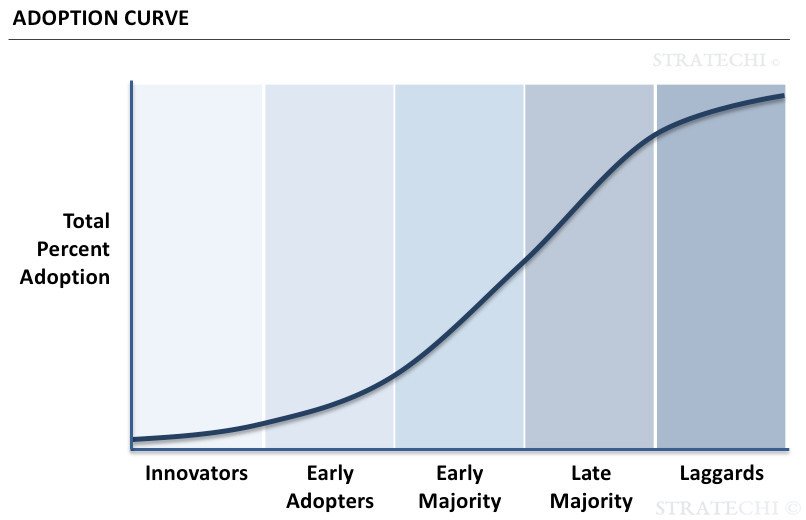 Breakthrough technologies often follow this type of S curve. Therefore, it’s appropriate to visualize where cryptocurrency stands in this diagram, but also in relation to other inventions as a comparison.

How Does The Cryptocurrency Adoption Curve Stack Up?

Moreover, how many crypto-asset users are there now compared to five years ago? In 2016, there were five million identity-verified crypto users worldwide, but by Q3 2020 that number increased to 101 million, a 1,900% increase. Although these numbers are staggering, they’re still only a fraction of the total population. This is why the technology itself and the crypto adoption rate divided by the population are still low, hence, is why they remain in the Innovator and Early Adopters segments.

How Common Is Crypto In Different Countries?

Here we can reference the Statista Global Consumer Survey, which drew personal feedback from crypto consumers worldwide regarding the question: how common is crypto? Their survey found that nationals from Nigeria were the most likely to say they used or owned cryptocurrency. Second, third, fourth, and fifth on their list were Vietnam, Philippines, Turkey, and Peru. Interestingly, none of these countries are among the world leaders in GDP, however, they reflect and represent the interests of emerging markets in crypto. 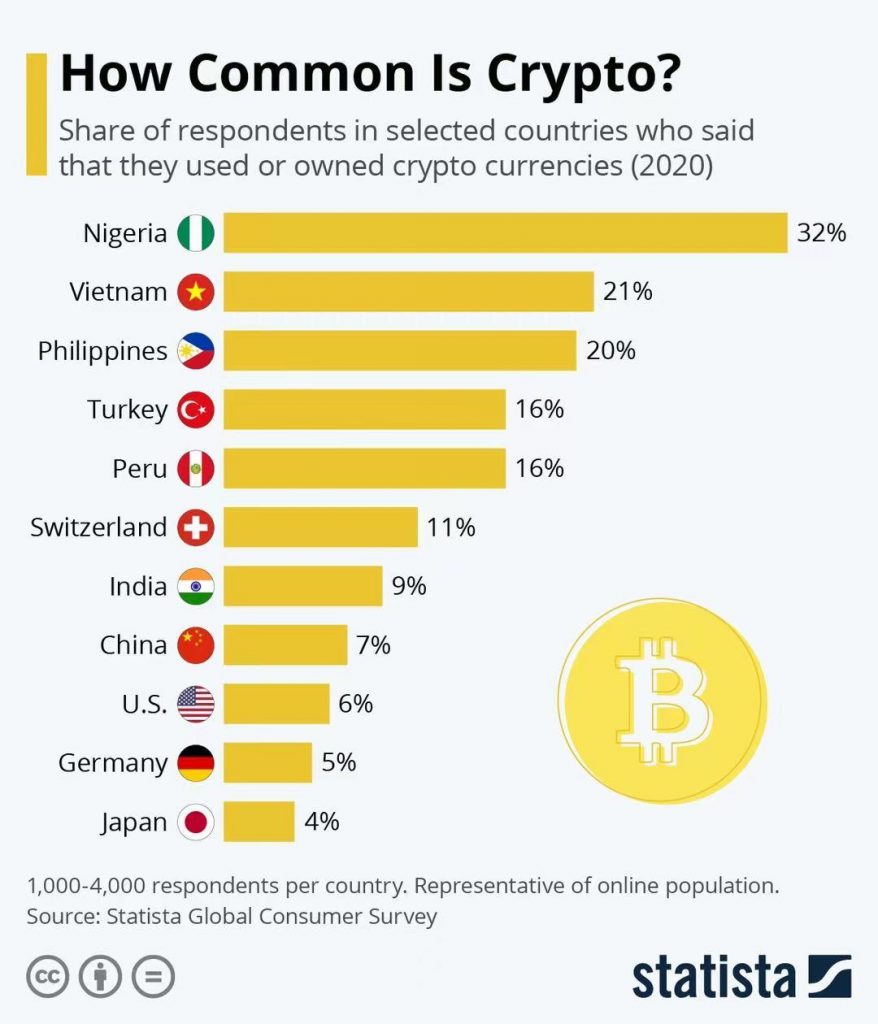 Crypto vs. Traditional Modern Inventions On The Adoption Curve

Now that we understand the basic logic of the adoption curve and where cryptocurrency falls on that scale, it’s necessary to ask these questions: how long did it take for the TV, the mobile phone, the Internet, electricity, airplanes, and the automobile to go from invention to substantial societal penetration? The answer to these questions will give us a reference on how to grade and assess the rate at which cryptocurrency proliferates throughout the economy and down to the households.

The graphic below shows that the Internet was one of the fastest inventions in modern history to go from market introduction to popular use in the United States. Compared to electricity, the airplane, telephone, and the automobile, the Internet’s adoption curve was much more rapid and steep. Surprisingly, the adoption curve for Bitcoin has been even more impressive. 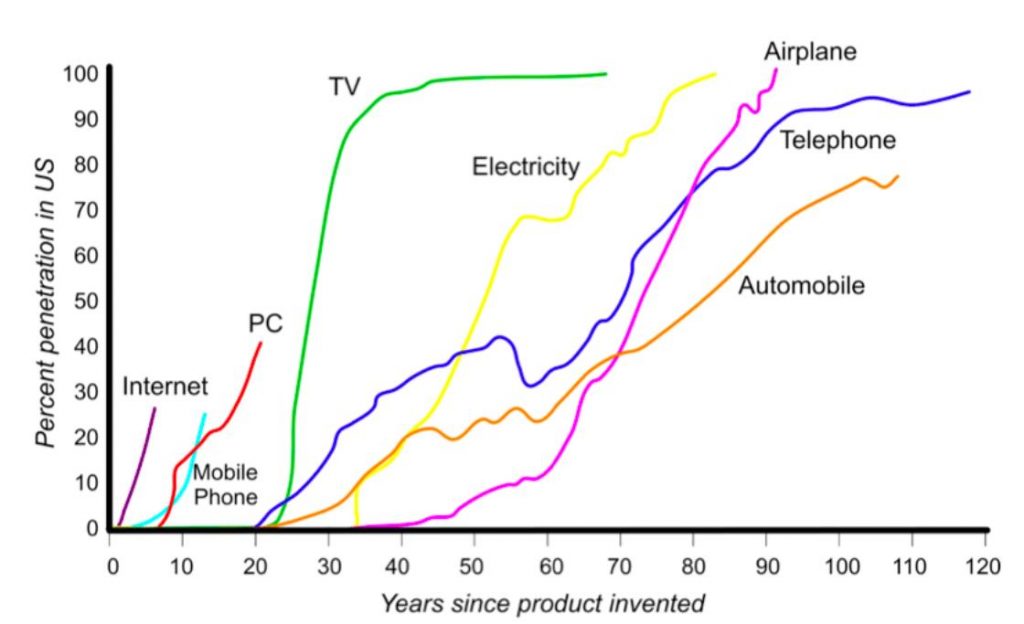 Bitcoin vs. The Internet: Is Bitcoin Adoption Everything It Seems To Be?

Many crypto writers and other financial analysts continually make the reference that Bitcoin adoption is closely following the speed at which the Internet was adopted. And this is quite accurate. From the picture below we can see that it took the Internet seven and a half years to go from 130 million users to 1 billion, and it’s estimated that it will only take four years for Bitcoin to reach the same accomplishment. Right now there are approximately 100-130 million Bitcoin and crypto users, so by 2025 that number will reach 1 billion (according to current annual adoption rates of 80%). 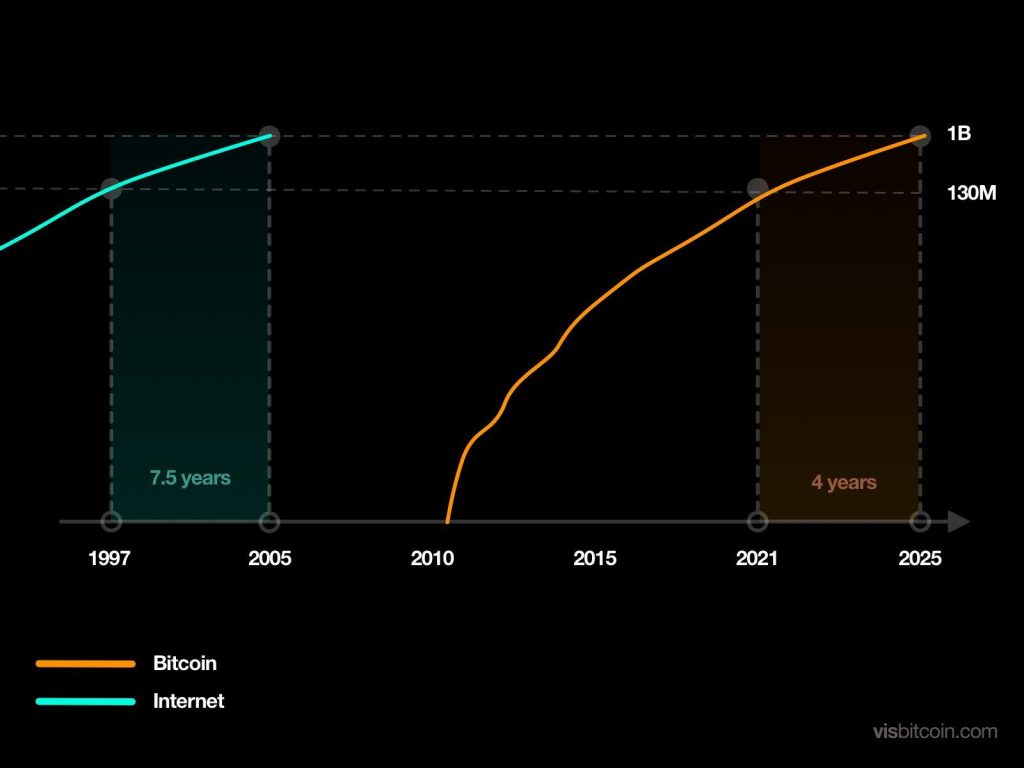 An important aspect to note about crypto adoption is that right now the best metrics for analyzing crypto users is by them having identity verified and registered accounts at centralized crypto exchanges. But we also know that not all crypto users have accounts on exchanges, so the numbers need to be adjusted accordingly to account for over and under estimation.

Where Is Bitcoin On The S Curve? 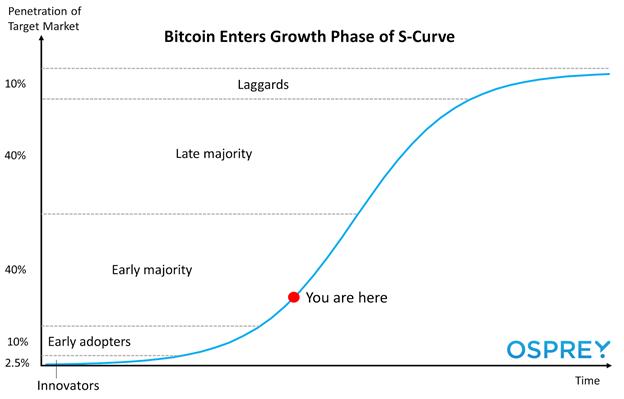 Right now as of middle to late 2021, Bitcoin adoption is in the Early Majority segment (as shown in the picture above). But this is an aggressive estimate, and many people are still saying that we’re still even earlier in the game. After all, 40% of the global population is still offline and 1.7 billion adults remain unbanked. Therefore, Bitcoin has a long way to go to reaching those who are offline and those who have not yet had access to modern-day banking services, let alone crypto. Since cellphones and the Internet can help those individuals cross the initial boundaries to getting to a bank, the future of global Bitcoin adoption remains dependent on whether the Internet can reach those individuals or not.

What Is the Bitcoin Adoption Rate By Country?

Right now there’s no perfect measurement of a country’s populace and their exact Bitcoin usage. This is due to the decentralized nature of Bitcoin. This is why many countries are now going after crypto and attempting to establish legislation to govern the use of cryptocurrencies and attach them to people’s identities (through KYC).

Despite having imperfect information, we can do our best by looking at other metrics such as search terms, trading volume on online exchanges, which nation’s investors are making the most money, and which countries have the most crypto ATMs.

Based on Google searches, consumers from Africa and Latin America made up eight of the top 10 countries with the most interest in Bitcoin in 2020. This statistic is from Google Trends, which compared searches with the keyword “Bitcoin” against searches for other cryptocurrencies. However, this study was done before Bitcoin’s price and market cap rose by the end of 2020 and early 2021. So the actual figure may be higher.

In terms of trading volume on online exchanges worldwide in 2020, the United States was the most dominant by far. It traded over $1.5 billion dollars in Bitcoin. In second place was Russia with $420 million dollars in Bitcoin trading volume, third was Nigera with $400 million, fourth, the rest of Europe with $204 million, fifth, China with $198 million, and sixth, the UK with $193 million.

Crypto Investors Around The Globe

With regards to which country’s investors made the most money from Bitcoin in 2020, the United States again led the way with $4.1 billion dollars in earnings. Second was China with $1.1 billion, third was Japan with $900 million, fourth was the UK with $800 million, and fifth was Russia with $600 million. The countries that make the most money from crypto trading can give us an estimate of the most influential traders and which places traders make the most profit. This can be used to reflect the investors’ attitudes towards Bitcoin in those places.

The last figure we can use to measure Bitcoin’s adoption rate is which countries have the most crypto ATMs. By definition, a crypto ATM allows a person to purchase Bitcoin and other cryptocurrencies by using cash or debit. The United States dominates this area. It has 17,436 crypto ATMs. Second place is Canada with 1,464 crypto ATMs. Thus, we can see that the United States has a leg up in terms of its readiness for crypto adoption. Crypto ATMs will be one of the touch-points to integrate the current banking and cash systems with that of crypto, and merge the crypto economy with the traditional economy.

The crypto adoption rate worldwide is increasing, and in particular, the popularity of Bitcoin is growing immensely. Most importantly, crypto adoption is not happening in any one country, region, or socioeconomic group. This is proven through the increased engagement and growth in emerging markets’ attitudes towards cryptocurrencies and Bitcoin. However, advanced economies with higher PPPs, incomes, and more developed financial and banking systems and infrastructure will lead the way forward. Nonetheless, greater cryptocurrency and Bitcoin adoption will not be without headwinds, as regulatory oversight and aggressive lawmakers seek to reign the industry in by creating CBDCs and attaching identities to crypto investors. Cryptocurrency As A National Currency 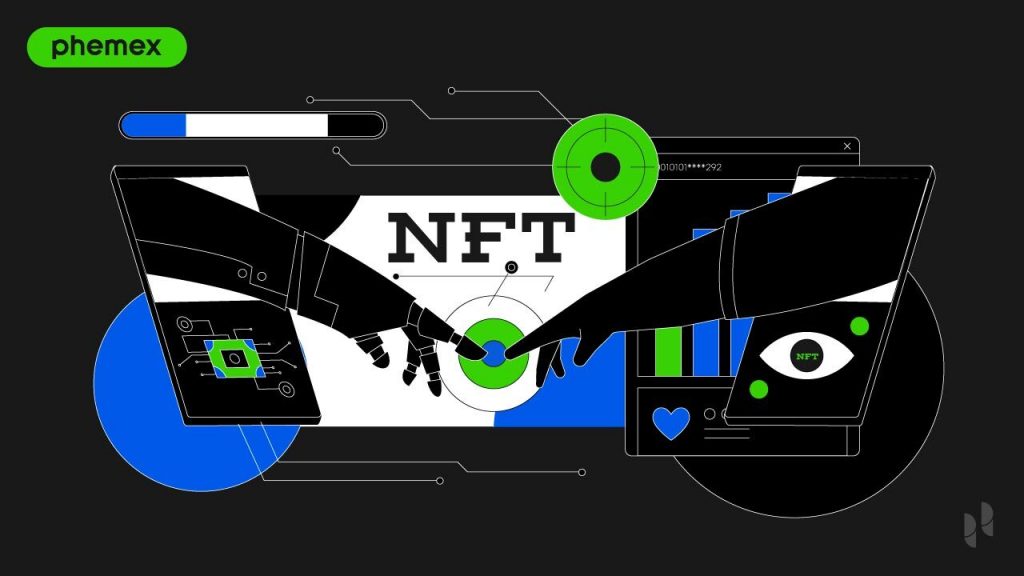