The 2021 Crypto Crashes Explained: What do they Mean for the Future?

Financial markets fluctuate and cryptos are often very volatile, however, a crash, which is a rapid and unexpected price drop, is much more serious. This happened to cryptocurrencies in both 2018 and 2021, where a crash in the crypto market resulted in the loss of trillions of dollars. Many smaller coins disappeared during these crashes, while others such as Bitcoin (BTC) and Ethereum (ETH) came out fighting and have since recovered. 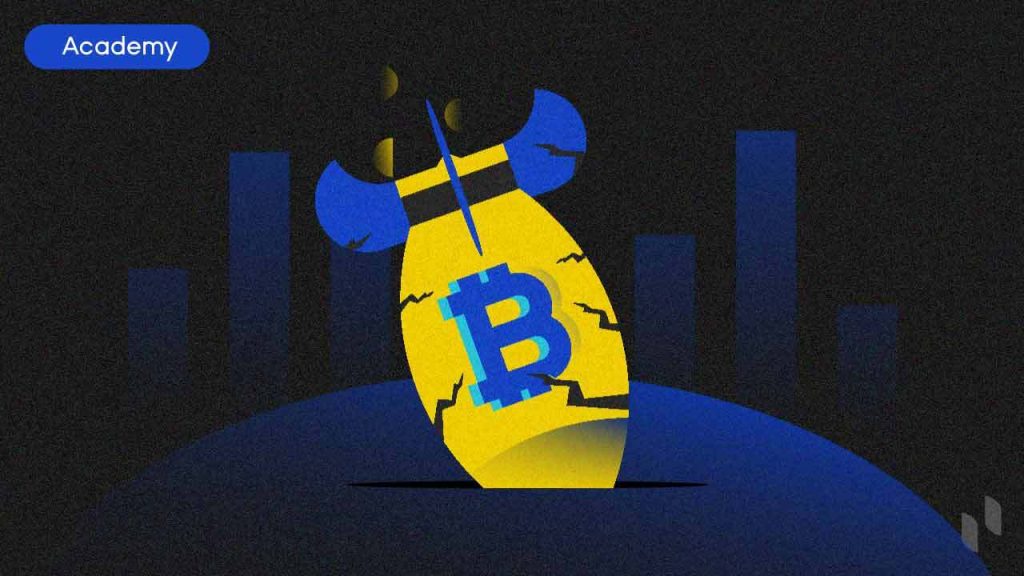 Why Is Crypto Crashing?

A crypto market crash is very unpredictable and it’s nearly impossible to foresee the next crypto market collapse. The below analysis of the previous crashes in 2018 and 2021 is helpful to understand the processes and see patterns. It’s also important to stay informed about the market at all times and be aware of how the policy world can impact cryptocurrencies. Doing this will help prepare investors to understand why crypto is crashing, when the next crypto crash will happen, what to do when crypto crashes, and what are the reasons for these cryptocurrency price drops.

Bitcoin has been around since 2009, but it wasn’t until 2017 that it really started to pick up pace. This came from Chinese miners looking to profit, as a recent Bitcoin halving had taken place in 2016. Over half the cryptocurrency miners were based in China, and without regulation it was easy to manipulate the market, increasing BTC’s value and thus their profit. The USA’s Effective Federal Funds Rate had also increased and the Federal Reserve had shrunk its balance sheet, creating a slight bear market. This meant that as the actual value was stagnating alongside the general market, the market manipulation from China was driving the perceived cost higher, thus creating a bubble.

As Bitcoin’s value started to increase, the public and media started to take note. Media coverage and investor excitement led to mass buying, which organically increased the value even more. This interest created business opportunities in other ways — for example, cryptocurrency courses, YouTube videos on cryptocurrency investments, social media ads, and so on. As a result, this generated greater interest and more investors. Additionally, Bitcoin futures were introduced, allowing people who otherwise couldn’t get into the market to short and invest in BTC.

By this point, BTC prices had spiraled out of control and far surpassed the value listed on the Bitcoin stock-to-flow model. The cost no longer reflected the number of coins in circulation compared to the amount being produced, thereby inflating the bubble. Bitcoin now stood at around $20,000 per coin, but people were paying as much as a 100% premium, $40,000, on Grayscale Bitcoin Investment Trust (GBTC). Additionally, hundreds of new altcoins were coming into existence, with buyers flocking to them as they saw an opportunity to get rich quick.

Cryptocurrency prices were out of control, and with individuals investing their life savings, it became a national issue. The US government stepped in to regulate, which in turn meant a forced stop to some degree of market manipulation. The price began decreasing, and excitement started to die down. Social media then outlawed crypto ads, which curbed new investor numbers, meaning a further drop in price. Rumors began circulating that South Korea would be banning crypto exchanges, affecting cryptocurrency’s legitimacy and longevity in the eyes of many. New investors began to panic sell, and as big players also sold, the price hurtled down.

This crypto market collapse really harmed Bitcoin’s and other cryptocurrencies’ reputations. Since it was a relatively newer asset, very few knew what was going on with crypto, why the market had suddenly crashed so quickly, and what to do when this happened.

Moreover, no one knew how far Bitcoin would crash? Many people assert that because on the surface cryptocurrencies aren’t real things, they thus don’t have any tangible value. So in essence, there was no limit to how far down bitcoin could fall.

Bitcoin had been on a tear throughout the later parts of 2021 and through Q1 2021. However, after a series of policy moves by China and the withdrawal of various celebrity support, in particular Elon Musk, the price fell hard. The entire crypto market seemed to have crashed again.

While many are familiar with the crypto crash in 2018, the seriousness of the 2021 crypto crash is still debated. There are those who remain skeptical about crypto, predicting its end, and others that firmly believe that crashes like 2018’s are behind them. Regardless, it cannot be ignored that Bitcoin lost 50% of its value in just three months, from $63,000 in April 2021 to $32,000 in July 2021.

Prior to the 2021 crash, Bitcoin had gone from $10,000 in September 2020 to four times that in January, and finally to its highest value yet ($63,000) in April 2021. This sharp rise came with the increased legitimization of cryptocurrency through big party investments, including banks, countries, and large companies.

In November 2020, PayPal introduced crypto purchases to its U.S. users, and in December crypto was adopted on an institutional level by major players, including MicroStrategy and GreyScale. Then into 2021, Tesla bought $1.5 billion of crypto and made a statement to Tesla vehicle purchases with crypto, and Mastercard began making moves too. In March, even Visa got involved, collaborating with crypto.com to settle payments using crypto.

Additionally, new and exciting altcoins, such as the Shiba token (SHIB) and Dogecoin (DOGE) were beginning to take off, thereby attracting more investors to the cryptocurrency sphere. With growing excitement and increasing ways to use blockchain technology and its coins, demand for cryptocurrencies grew, and the value was propelled upward.

With the surge in cryptocurrency users (143 million users in April) came a greater demand for mining. The resulting carbon emissions became too large to ignore, and in May, Tesla dropped its acceptance of crypto as payment.

Moreover, with so many miners based in China, this enormous carbon footprint threatened to derail the country’s carbon-cutting plan. Not only that, but the decentralization of the currency and the ability to move assets outside of China threatened the economy. A blackout ensued, with mining shut down across the country and miners forced to relocate abroad.

This event not only meant a drastic reduction (49%) in the hashing rate but also shook confidence in cryptocurrency, and brought to the discussion the degree to which many coins were becoming centralized. It is thought that between 50 and 75% of Bitcoin miners were in China, with Elon Musk going so far as to tweet that China practically owned Bitcoin. This loss in confidence drove many to simultaneously ditch their crypto assets, causing the price to plummet. This symbolized the second crypto crash.

Media outlets began to share stories that further fed concern. Where Turkey had banned crypto for payments, the media reported an outright ban, while CNBC reported outdated information on how India was criminalizing cryptocurrency involvement. Social media also played its part, with one prominent tweeter, FXHedge, stating (with no evidence) that the US Treasury would be charging several financial institutions for money laundering with cryptocurrency. The combination of technical issues and the sentiment of fear driven by the media led to a sharp and rapid decline in cryptocurrency prices, with a fall of over 50% in just three months.

Despite the recent 2021 crypto market crash, cryptocurrencies are already bouncing back, something that is clearly shown by Bitcoin’s value of nearly $63,300 today (Oct 2021). Confidence in cryptocurrency is still strong. Since the May crash, Mastercard has launched a cryptocurrency and blockchain program for start-ups and El Salvador has accepted cryptocurrency as legal tender. Additionally, decentralized finance (DeFi) continues to make great gains, while Ethereum progresses with its update to Ethereum 2.0, aiming to cut emissions by 90%.

There are still some bumps, as some countries such as France and Albania, push for further regulation. However, there is no fear of centralization, and arguably this regulation will further help legitimize crypto. Thus, it would seem that despite May’s crypto market crash, confidence remains high and opportunities remain on the horizon. Nothing proves this more than the huge jump in users that cryptocurrency has seen: from 143 million at the end of April to 221 million as of June.

Bitcoin and other cryptocurrencies are continuing to increase in value, and so the question that everyone is asking is if there will be another crash? Opinions on this are certainly divided. Critics, including celebrated investor and CEO of Berkshire Hathaway Warren Buffett, predict that cryptocurrency will disappear completely, while supporters, including former Goldman Sachs executive Raoul Pal, predict it to continue to rise and revolutionize the financial market. Despite his U-turns, Elon Musk is another influential person who sees great potential in cryptocurrency, particularly Bitcoin, not just as an asset, but as a faster and more secure way to store and move money.

Cryptocurrency still has a long way to go, and as it adjusts to the market and makes improvements in speed, security, and carbon emissions, its value will certainly fluctuate. However, judging by its fast recovery and adoption by countries and major players so soon after its fall, confidence in crypto has prevailed. Additionally, its fast recovery despite a sudden loss of over half of its miners shows its robustness, as well as its miners’ versatility. Whether there will be another crash is uncertain, but with these indicators, it does seem as though cryptocurrency is here to stay.

What to do when crypto crashes?

As stated above, no one can predict the future of the market and no one knows when the next crypto market crash will happen. But that doesn’t mean investors don’t have options to prepare themselves for these unforeseen events. For example, traders can employ diversification strategies outside of crypto to hedge against potential market downturns. Also, more advanced traders can use futures to balance the market direction with their portfolios. So if you see that Bitcoin is going down again, then maybe that is a signal to adjust your investment strategy.

What does BTC’s stock-to-flow model tell us about crypto market crashes?

Most cryptocurrencies follow BTC, and when looking at BTC’s stock-to-flow chart, we can see that the price tends to overshoot its stock-flow rate, and then rectify. After a high overshoot, such as in 2018 and 2021, the price then seems to plummet below the stock to-flow value, before finally rectifying itself. As can be seen in the below chart, this trend has been consistent so far, meaning that it could be indicative of future pricing fluctuations.

Based on the predicted stock-to-flow rate, BTC, and therefore cryptocurrency in general is only expected to increase in value. It is possible that another crash will happen, but if the rectifying trend continues, it should quickly resume its path upward.

Fluctuation is a normal part of financial markets, and despite this fluctuation reaching worrying lows in both 2018 and 2021, cryptocurrency has come out fighting. In 2018, multiple smaller coins died out, but Bitcoin remained afloat and still relatively healthy, with a market cap of over $100 billion. In 2021, cryptocurrency lost half its value in three months, but by the following month, countries and multinational companies were jostling to invest once more. Major cryptocurrencies seem sturdy, and despite further fluctuation, and potentially crashes, the trend argues in favor of longevity. In terms of the impact of future crashes meanwhile, the difference in recovery between the 2018 and 2021 crashes suggests that the worst may be behind us.