TXID, short for “transaction ID” and also known as TxID, is a hash number that records a transaction on the blockchain. All transactions on the Bitcoin (BTC) and Ethereum (ETH) blockchains are recorded in a string of hashes — that is, transaction IDs. 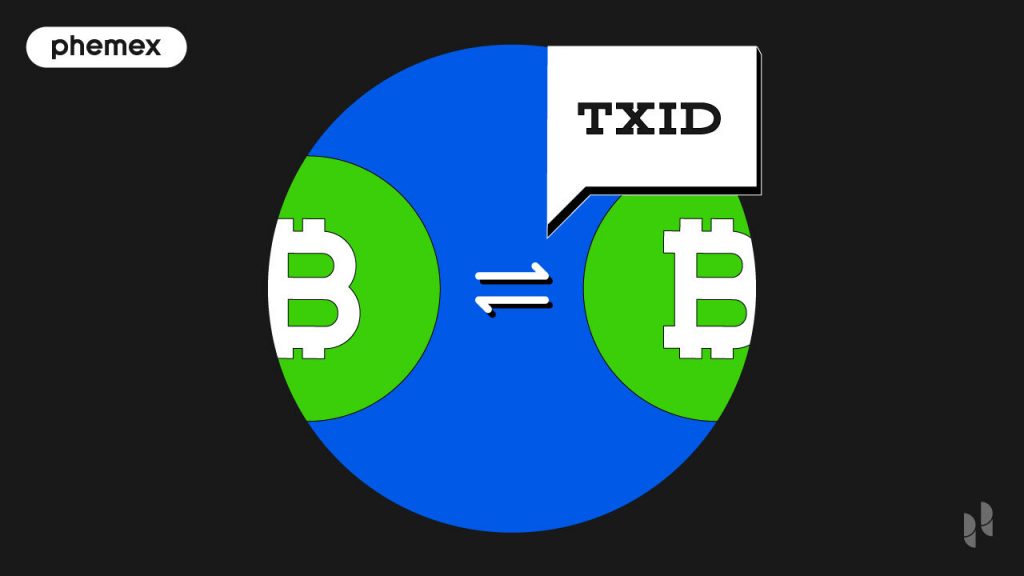 What Is the Meaning of TXIDs?

A blockchain is made of blocks, which are in turn made of multiple transactions. If a user wants to identify when a crypto transaction was made on the blockchain, they need a TXID.

Blockchain transactions are immutable to prevent censorship and create a trustless system. Therefore, TXIDs serve as definite proof that funds were spent. The records are embedded on the blockchain permanently and cannot be erased. If a crypto exchange like Phemex needs confirmation of a missing deposit or a withdrawal, a public TXID can help retrieve the funds.

Some cryptos do not have TXIDs. These are anonymous cryptos such as Monero and ZCash that don’t keep transaction records and keep payment data/balances hidden for privacy purposes. On Bitcoin and Ethereum, users can easily see all transactions that occurred publicly through block explorers. Block explorers show all transactions on the blockchain in real time and allow users to view crypto balances. The most used explorer for Bitcoin is Blockchain.com, and for Ethereum it’s Etherscan.

TXIDs on Bitcoin and Ethereum both contain 64 characters that can be any random variation of letters and numbers. The TXID is not the same as a wallet address (despite having a similar encoding style), but merely a record of a certain transaction that occurred on the blockchain.

What Was the First TXID?

The first record of a TXID on Bitcoin occurred in 2009:

This 64-character transaction hash represents the first Bitcoin transaction, when Bitcoin founder Satoshi Nakamoto sent 50 BTC to his friend as a test in 2009. This TXID can still be seen on the blockchain. All miners who start mining Bitcoin have to download the entire blockchain, keeping records of every single transaction from the beginning of Bitcoin until now.

Another example of a historic transaction ID is the famous 2010 pizza transaction:

What Are Bitcoin TXIDs?

The 64-character output is actually smaller than the original hashed value. According to SHA-2 guidelines, a cryptographic hash that is 256 bits long can be converted to a 64-character output. However, all Bitcoin data must be hashed twice.

Let’s say we start with 256-bit array of bytes. Once these bytes are double-hashed using SHA-256, they produce the following 64-character output:

If a user wanted to make adjustments to the standard transaction hash and include Bitcoin smart contracts such as time locks or multi-sig transactions, they could do this at an extra cost.

Similar or identical hashing techniques are used by all popular blockchains in the world. Ethereum uses the same form of encryption as Bitcoin, and all Ethereum transaction IDs also have 64 characters because they use SHA-265 encryption.

The hash can also include a personal message that can be decoded. Users have to add the following command to their transaction:

OP_RETURN {80 bytes of whatever data you want}

In the Bitcoin genesis block, Satoshi Nakamoto encoded the following message: “”The Times 03/Jan/2009 Chancellor on brink of second bailout for banks” in reference to the rationale of creating cryptocurrencies to counter centralized financial institutions.

That message was contained in the following 64 character hash (TXID):

What Are Ethereum TXIDs?

Ethereum TXIDs have 64 characters, the same as on Bitcoin. Each transaction on Ethereum has a fee, and this fee is credited to either miners or stakers on ETH 2.0. Ethereum uses so-called “gas fees” to transfer value on the blockchain.

Etherscan provides a detailed overview of every transaction and smart contract executed on the Ethereum blockchain. For each block you click on or search for, you will find a list of transactions that were executed in it.

What Are Block Explorers for TXIDs?

To search a transaction ID on each one of these explorers, paste the transaction you got from Phemex in the search bar and the details of your deposit/withdrawal will appear.

How Do TXIDs Benefit Blockchains?

Besides providing proof that funds were spent on the blockchain, TXIDs carry valuable information about all transactions that occurred during the chain’s history. These 64-character hashes can be used to verify the integrity of the data being passed for future block creation/mining.

The core idea of a blockchain is to create an immutable and trustless ledger for payments. Immutable means that it can’t be tampered with and/or reversed. If a user double-encrypts a transaction, they get a certain hash/TXID that is immutable as long as the blockchain continues. This guarantees censorship resistance and removes the trust aspect, allowing people to spend their money without worrying about it being stolen or frozen like it could in a bank. It also means that TXID’s/hashes will be searchable on one of the block explorers listed above even 10 years later.

Does Phemex Use TXIDs?

Every withdrawal and deposit on Phemex has a transaction ID that you can locate by browsing your asset history. If you visit the “Assets” section of your account and click “Withdraw”, you can enter “Recent History” to find records of all TXIDs for past withdrawals.

It’s impossible to recover funds accidentally sent to the wrong address, but if you deposit crypto to your deposit address and it’s not credited in your balance, the TXID can save you. Simply search a block explorer for the corresponding TXID, and if it matches the deposit address on your account, Phemex will credit you the balance you deposited.

Most cryptos, from established players like Bitcoin to memecoins like Dogecoin, use an ID made of 64 unique characters to identify each transaction. As part of the blockchain, these transactions can never be erased, and their transaction IDs will also remain in the records for as long as the blockchain is alive. Many blockchains have their own block explorers, where all transaction IDs can be viewed publicly.

Every time a user on Phemex deposits or withdraws crypto, they are allocated a transaction ID for that particular transaction, which can be traced on the blockchain. Using a TXID, Phemex support can retrieve a lost deposit if it wasn’t picked up by the automated deposit system.

The bottom line is that transaction IDs are imperative for the functioning of the blockchain ecosystem, and support some of blockchain technology’s most valuable advantages, from transparency to censorship resistance.