What is Avalanche (AVAX): A Revolutionary Consensus Protocol

Launched in 2020, Avalanche (AVAX) is an open-source platform where developers can build and launch decentralized applications (DApps) in a highly scalable ecosystem. AVAX trades at $13 per coin with a circulating supply of 172 million, for a market cap of $2.2 billion. 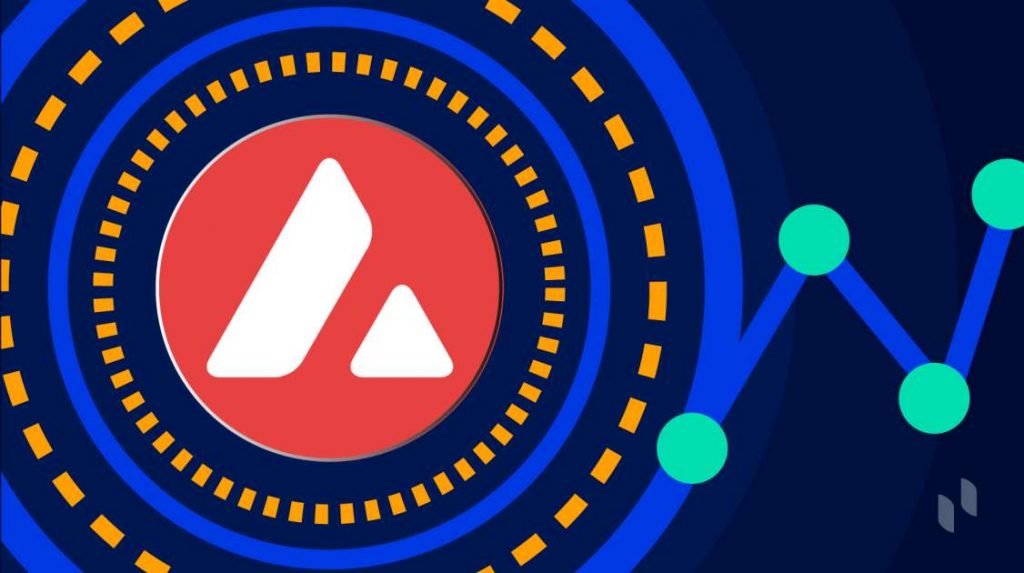 Avalanche’s story starts with decentralized finance (DeFi). DeFi is a blockchain-based ecosystem that gives users access to financial services without relying on centralized financial intermediaries. Users can lend or borrow funds from others via the utilization of smart contracts on blockchains. The most common of these blockchains is Ethereum (ETH), but its rapid user influx has led to sky-high fees and slow transaction speeds that can’t compete with traditional systems. Although Ethereum plans to solve its scalability issues via the ETH 2.0 upgrade, completion has been delayed multiple times and is currently not expected until 2022.

Avalanche is the first smart contracts platform capable of finalizing transactions in under one second and can process high transaction volumes while maintaining low fees. Its developers claim that the platform can process 4,500 transactions per second, with security guarantees well above the 51% standard. Avalanche is still secure even if up to 60% of the network is malicious.

As stated by Avalanche’s founder, the platform is not intended to be an “Ethereum Killer” but rather a safety net for Ethereum as it transitions to ETH 2.0. The Avalanche network also supports Ethereum Virtual Machines (EVM) and the entire Ethereum development toolkit. Developers can port their applications from the Ethereum network into Avalanche to test their applications at a higher throughput and faster finalization speeds. This is made possible with the Avalanche-Ethereum Bridge.

The AVAX token is the Avalanche network’s native token and the base unit of account on the Avalanche blockchain. Users can stake AVAX tokens to earn passive income, use them to pay for fees, and receive them as incentives. The reward from staking increases with the number of tokens staked and the staking duration.

How Does Avalanche Work?

Unlike Ethereum, every Avalanche app runs on its own subnet, which is a group of validator nodes coordinating to achieve consensus on the state of a set of blockchains. Developers can build custom subnets using a toolkit. With these subnets, applications do not need to compete for network resources, thereby maintaining fast transactions and low fees on the Avalanche network. How the Avalanche Consensus Protocol compares to the Nakamoto and classical consensus protocols. (Source: Avalanche)

The Avalanche Consensus Protocol is a family of four mechanisms — Slush, Snowflake, Snowball, and Avalanche — which build upon each other and become more secure in the process. In short, the Avalanche Consensus Protocol is a unique voting protocol that relies on a process called “repeated random subsampling.” In the process, validator nodes randomly query other validators until the network reaches a consensus and decides whether to accept or reject an incoming transaction.

All validators are members of the Primary Network which consists of three blockchains: the Exchange Chain (X-Chain), Contract Chain (C-Chain), and Platform Chain (P-Chain). 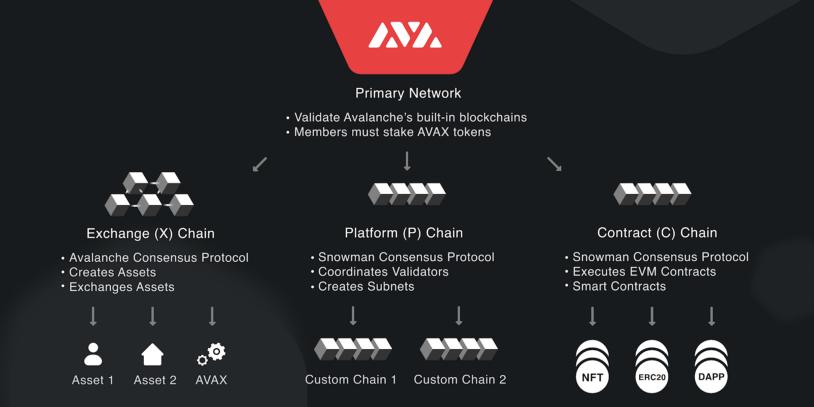 Who Is Behind Avalanche?

Kevin Sekniqi is the Chief Operating Officer at Ava Labs. He holds a PhD in computer science from Cornell University. Sekniqi previously worked as a researcher and software engineer for NASA Jet Propulsion Laboratory and Microsoft.

Maofan Yin is Ava Labs’ Chief Protocol Architect. Like Sekniqi, Yin also holds a PhD in computer science from Cornell University. During Yin’s postgraduate studies, Sirer was one of his advisors.

AVAX’s price remained stable from its late-2020 launch until early 2021. Driven by news of the potential Avalanche-Ethereum bridge launch in January 2021, the price quickly rose from $4 to around $13. After a slight delay, the bridge went online on February 9, causing the price to increase by more than 300% to its historic peak of $55.

The price dropped drastically a few days later, possibly caused by reports of an invalid minting bug that occurred on February 11. AVAX’s price then went into a sideways trend and traded between $21 and $38 over three months. On May 19, the price plummeted to its current $13 value following various negative headlines, such as new cryptocurrency regulations in China and Tesla’s suspension of Bitcoin payments. The negative news affected the crypto market as a whole, resulting in price drops across the board. 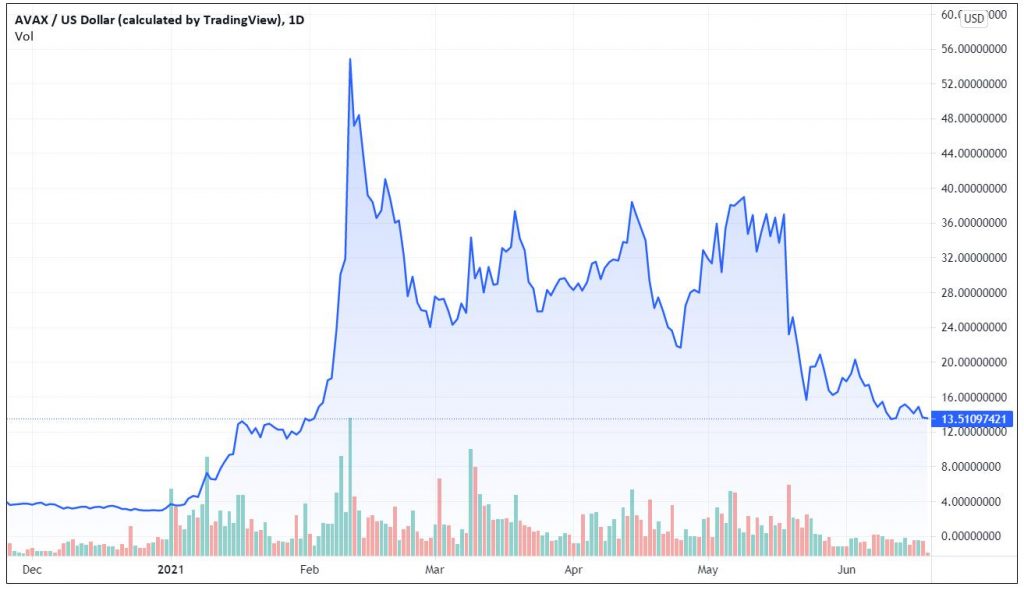 What Is the Outlook for Avalanche?

However, there are some issues, most notably the aforementioned invalid minting bug. Although the Avalanche team managed to fix the issue in a few days, the bug still cast doubt on the cryptographic verification used by the Avalanche platform. The bug occurred when network traffic increased following Pangolin’s launch, in turn sparking a massive increase in the number of concurrently processing blocks. On a good note, this event proved that Avalanche is a truly immutable platform, as developers were unable to reverse the bugged mints.

The Avalanche network’s security and scalability, in general, are not free from criticism. As Polkadot (DOT) founder Gavin Wood notes, a scalable network must provide the same security guarantees across the network, and a network is only as secure as its least-secure subnet. With the different security levels across Avalanche’s blockchains, messages from less-secure subnets may be transmitted to a more secure subnet, compromising scalability and security. Wood further criticized Avalanche’s reliance on a single and central network to execute potentially sensitive operations will lead to a bottleneck. The single network might not have enough data handling capacity for a huge traffic volume resulting in scalability issues such as slow transactions and high fees. A member of Avalanche’s team responded with several rebuttals to Wood’s points. One rebuttal involves Wood’s perspective on how Avalanche is only as safe as its least safe subnet. The developer states that Wood is wrong as a subnet’s security is independent of the whole network.

The Avalanche project’s consensus protocol is one of the most exciting breakthroughs in blockchain history, enabling the network to be secure, decentralized, and scalable. With good funding and a constant stream of projects joining the network, Avalanche has a good chance of carving a path for itself in the blockchain world. However, the project doesn’t have a spotless record, having faced an invalid minting bug and some security- and scalability-focused criticism. That said, almost all major blockchains go through bugs and security issues eventually. What matters is Avalanche’s responses and how they can spin such events into opportunities to strengthen their system.