What is Zcash (ZEC): A Privacy-Focused Cryptocurrency

Zcash is a privacy-centered, low-fee cryptocurrency. While it has had ups and its downs, the fact that the currency still exists at all is at least a testament to its durability. It has a price of $110.80, a circulating supply of almost 13.8 million, and a market cap of $1.5 billion, ranking #79 among all cryptocurrencies. 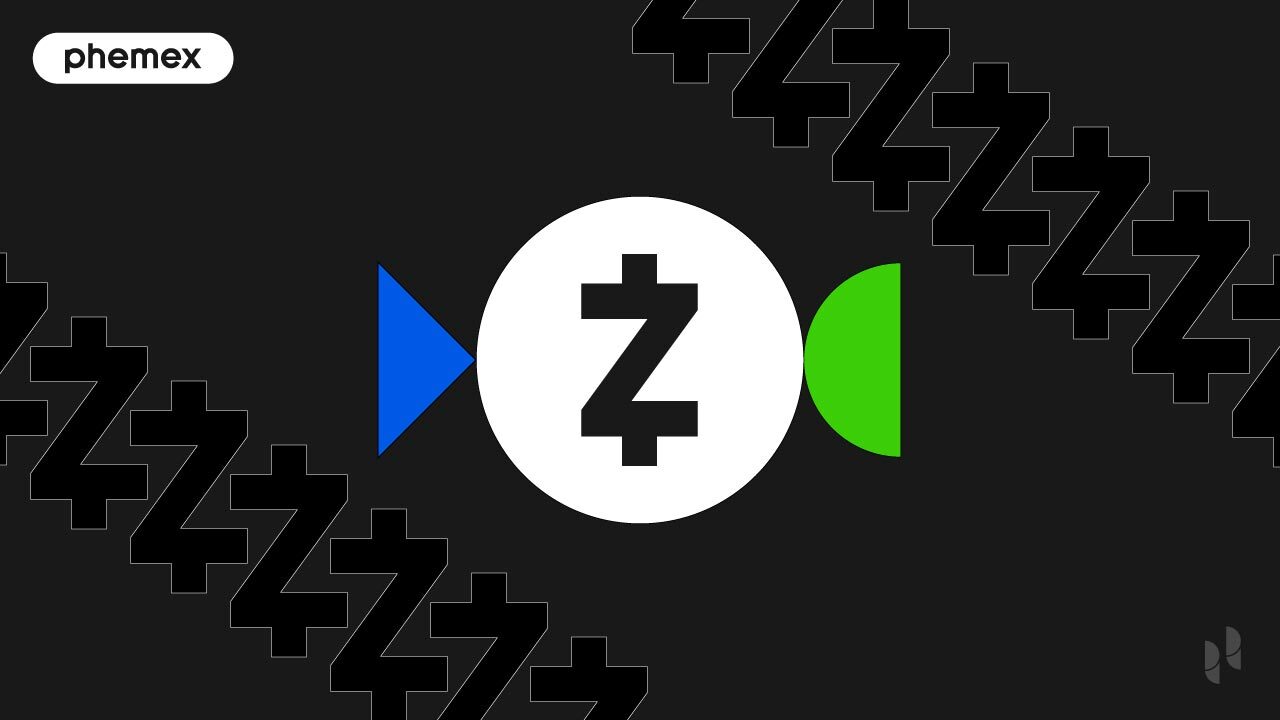 Launched in 2016, Zcash is a cryptocurrency payment platform based on the Bitcoin (BTC) blockchain network. The platform’s coin, ZEC, is traded on many major crypto platforms, including Phemex.

Zcash is dedicated to ensuring a higher degree of privacy and anonymity for digital transactions, which is intrinsic to decentralized finance (DeFi). DeFi simply refers to any financial system not run or regulated by national governing bodies, such as governments or banking institutions.

In Bitcoin’s privacy model, a user’s transactions are publicly viewable, but their identity is not. While this system is secure to some extent, users’ identities can sometimes be deduced from their transaction history and other external information.

The developers of Zcash sought to solve this issue with a truly anonymous privacy model of their own creation.

How Does Zcash Work?

Zcash and Zcash explorer rely on a high transactions per second (TPS) rate and a concept called zk-SNARKs to improve operability and privacy on their network:

What Algorithm Does Zcash Use?

Zcash uses an algorithm called Equihash. This system relies on low RAM requirements – which stops miners from potentially exploiting it, and one of the things that makes the network run quickly and efficiently. Users can mine Zcash using the networks slightly altered proof-of-work (PoW) functionality, which is improved upon by the Equihash algorithm. However, it’s important to note that it’s not fully compatible with application-specific integrated circuits (ASICs) which are costly to operate for miners.

What Is Zcash Used For?

ZEC can actually be used in a couple of different ways:

How Does Zcash Compare to Similar Applications?

To better understand the way that Zcash and the Zcash coin work, consider Bitcoin Cash and Monero, well-known applications of similar functionality:

It’s important to remember, however, that Zcash is a far smaller platform than Bitcoin Cash and Monero. If Zcash experienced the same demand as its rivals, it would likely face similar scalability issues (particularly in the case of private transactions). Scalability, which refers to the ability of a network to process a high number of transactions in a split-second, is a serious issue of contention within the cryptocurrency community. It remains to be seen whether Zcash’s developers can find a solution to this potential scalability problem.

What Makes the Zcash Digital Currency Stand Out?

Other than Zcash’s innovative zk-SNARK system, a number of factors separate the company from its peers. A focus on two things in particular helps Zcash stand out:

Privacy can be important for various reasons. With transparent ledgers, users’ identities can be deduced from their balances and transaction history, leaving them vulnerable to fraud. Privacy-focused coins like Zcash protect users against being identified and/or targeted in this fashion. Such cryptocurrencies are also used to obtain goods and services that are illegal in one’s country, though a 2020 academic study found no evidence for large-scale illegal activities being conducted with Zcash.

Who Is Behind Zcash?

Zcash actually originated from a different digital currency, though one that remained conceptual, called Zerocoin. Zerocoin was proposed in 2013 by academic scientists Matthew Green, Christina Garman, and Ian Miers. It was to be an extension to Bitcoin that introduced privacy-related improvements to the blockchain.

When the initial Zerocoin proposal faced a lack of traction and acceptance within the Bitcoin developer community, the core Zerocoin team decided to launch an independent cryptocurrency. They approached noted cryptographer Zooko Wilcox-O’Hearn to lead the new coin’s development, and recruited other scientists including Eli Ben-Sassoon and Alessandro Chiesa.

Wilcox-O’Hearn remains the CEO of the Electric Coin Company, which has about 30 employees and leads Zcash’s development. Notably, about 20% of all Zcash mined has gone towards supporting its developers for the coin’s first four years of existence (ending in 2021). In 2018, Wilcox-O’Hearn disclosed that he was receiving about $3.6 million worth of Zcash per year. This was the subject of some controversy within the crypto community. Some accused the coin of being too centralized, while others defended Wilcox-O’Hearn and praised his transparency.

What Are Zcash Forks?

As mentioned, there have been accusations of Zcash being a controversial company and currency. Some in the crypto space have argued that their system is rigged in its own favor, due to its relatively steep 20% founder fee embedded into the coding. However, Zcash’s supporters have always been quick to defend the company, pointing out inherent flaws in other systems, such as Bitcoin’s lack of privacy.

Whatever the case may be, the company has forked many times over the years. A fork in blockchain terminology refers to a situation where the network splits. This can be to implement a new set of rules that were previously unavailable to the existing network, or can occur accidentally. In this case, it will usually be because there has been a fault in a system somewhere, with two sets of data yielding contradictory information as the result of them being entered simultaneously.

The Zcash crypto started out strong in October 2016, trading for over $4000 on its launch day, significantly higher than its ICO of roughly $575. However, the price fell to less than $1000 the following day, and remained lower than $100 in the following months, save for a brief peak during the 2017 crypto bull run.

It has not yet come close to reaching its hype-fueled initial 2016 valuation or even its second, shorter peak. However, in early-2021, Zcash’s price grew from $86.79 to $219.17, a 152% increase (Bitcoin experienced a 66% surge in the same period). This rise can be partly attributed to what was called the “altcoin season,” which saw significant capital flow into altcoins (which are cryptocurrencies other than Bitcoin). Another potential catalyst for Zcash’s value rise in 2021 is the coin’s first “halving“ — a major milestone that indicates reduced issuance of new Zcash supply. 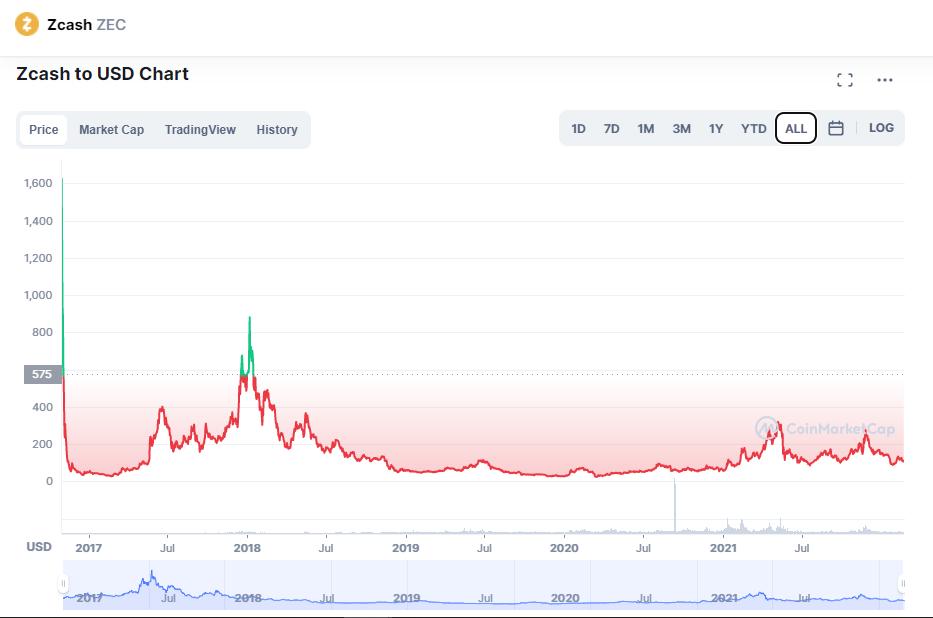 To put it lightly, ZEC has underperformed considerably over its lifespan. The fact that it has survived may be a credit to it, but the fact it has struggled to survive, with the Japanese Financial Security Agency announcing a ban on Zcash in 2018, citing illegal activity, is also rather telling. This ban was also imposed on other anonymous crypto firms; however, this fact may lead some to choose caution when deciding whether to invest in this currency. As with any investment, never invest more than you are prepared to lose.

What Is The Future of Zcash?

Zcash’s outlook seems relatively stable for now. However, it may be negatively impacted by its competition with other privacy-focused cryptocurrencies. As a privacy-centered cryptocurrency based on Bitcoin, Zcash’s main distinguishing features are its respected academic developers, its original cryptographic method, and its status as a second-mover. It has stood the test of time, but it remains uncertain whether these features can ensure continued growth among competition from other anonymous coins.

Another potential concern for Zcash is government regulation. Privacy-focused cryptocurrencies have long been associated with illegal activities on the internet. A few countries (e.g., Pakistan and Macedonia) have banned all cryptocurrency-related activity, and Japan has even taken some relatively concrete actions against anonymous coins. In 2018, its Financial Security Agency announced a ban on Monero, Zcash, and other anonymous cryptocurrencies, citing illegal activity. However, it’s important to note that Zcash has weathered the controversy, recovering considerably in recent years.

Zcash’s development team is planning to introduce its Halo 2 system to improve the protocol’s security and allow for further improvements to scalability. If these improvements are successful, Zcash could experience greater adoption and developer support in the future.

Overall, Zcash has carved out a small but notable niche in the crowded crypto market. It offers anonymity, and has many features similar to Bitcoin. The company employs a generally well respected academic development team, and also has a small but dedicated community.

However, Zcash’s current ranking among its competitors means that its continued growth may depend partially on the success of its planned improvements. It may also depend on whether its mostly academic team can effectively market Zcash’s advantages to a wider public. So, what is Zcash worth, you may ask? Unfortunately, it looks as if we are all going to have to wait and see. In any case, Zcash’s durability and proliferation, combined with planned upgrades on its platform, might make it a coin worth watching in 2022.