What is Ripple – XRP?

XRP is a cryptocurrency used and developed by Ripple. It claims to be faster and more eco-friendly than many other cryptocurrencies. Ripple is a company that was founded in 2012, previously Ripple Labs. Ripple developed a financial network called RippleNet. RippleNet is designed to facilitate institutional payment-providers such as banks to process currency transfers globally. It uses the token XRP to represent the transfer of value across the network, regardless of the currency you start or end with. This token is sometimes also referred to as RippleXRP. XRP is the actual token that can be bought and traded on the Ripple networks. Similar to how Bitcoin is the network and BTC is its coin. However, XRP was not designed as a method of payment in the way that Bitcoin was. Instead, as mentioned it is used to facilitate transfers between different currencies with RippleNet.

To clearly explain how the XRP token works, let’s compare it to Bitcoin. Bitcoin uses blockchain technology to store BTC transaction data and Ripple uses the XRP Ledger. Both the Bitcoin blockchain and XRP Ledger are types of distributed ledgers, but how they validate transactions differs. BTC uses a Proof of Work system whereby miners compete to be the first to solve mathematical problems in order to hash a block and mine new BTC tokens. XRP uses a more eco-friendly trust-based consensus algorithm to confirm transactions and add them to the XRP Ledger creating a new ledger version. This means that the transaction settlement time for XRP is roughly 4 seconds compared to 1 hour for BTC.

What is the difference between Proof of Work and Proof of Stake?

Another difference between the two is the data that each distributed ledger stores. On the Bitcoin blockchain, each block contains only the history of transactions that have happened within a given time period and a reference (block header hash) to previous blocks. On the XRP ledger, however, a lot more information is stored. Account information such as balances, transactions, and objects stored in the ledger are all viewable. Each ledger version is essentially a point in time snapshot of all the balances held by all the addresses. Each time new transactions are verified on the ledger, the new ledger version contains all the previous information plus the new transactions, increasing the blocks “height”.

How many XRP are there?

RippleNet is the financial network that uses XRP as a medium for transactions in different currencies. For example, if you were transferring money between accounts in separate countries there are two scenarios. Either a direct exchange rate exists between the currencies, and you would incur transaction fees and be subject to the current rate of exchange, as well as long transaction times. Or, if no direct exchange rate between the two currencies exists, the bank would take Currency A and convert it to USD, this is then converted to Currency B. In this way, you end up paying the fees of both conversions as well as factoring in the exchange rates and transaction times.

However, XRP is intended to create a solution to both of these scenarios. The idea is that instead of transferring fiat currency or having to convert to USD, Bank A can deposit the corresponding amount of XRP for a given transaction into Bank B’s Ripple portfolio. By doing this, exchange fees are cut and the time it takes to process the transaction is greatly reduced. The only fee Ripple itself charges is a transaction cost of 0.00001XRP. This is taken as an anti-spam measure and is not paid to any party but instead is irrevocably destroyed.

Is XRP a good investment?

We’ll start by saying it again, make sure that before you invest in any cryptocurrency you take the time to read up about it and follow the latest news. Before accepting any advice, have your own idea and frame of reference, and above all only invest what you can afford to lose.

With that said, there are some respectable large financial institutions such as Santander, Fidor, the Commonwealth Bank of Australia, and 61 Japanese banks employing RippleNet on a trial basis. Support by official organizations and banks means more trust and fewer regulatory challenges. If it gets adopted by many more financial institutions, it has the potential to one day become a single unified bank currency. On the other hand, if the banks choose not to use RippleNet then the value of XRP is likely to fall.

Another point to note is that it is highly centralized unlike most other cryptocurrencies and only the Ripple company has control over XRP. This means that they can, and have done, freeze transactions at their own discretion. This itself goes against the core principles of cryptocurrency

Where and how can I buy XRP? 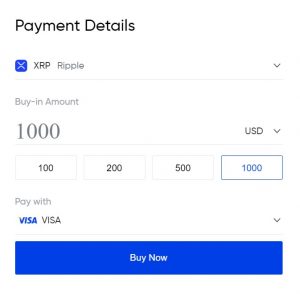 On Phemex you can directly buy XRP with a credit card and begin trading right away. You should be aware, that to be able to withdraw or transact in Ripple XRP you need to have a minimum amount of 20 XRP in your wallet at all times. This is called the Base Reserve and is used as an anti-spam measure.

Should I buy XRP?

Long story short. Ripple XRP is a cryptocurrency that has been designed to be used by banks as a go-between for transferring fiat currencies to minimize fees and time. A few people believe that if/when banks adopt the Ripple system, it will become a strong investment. Even though it is not as mainstream as Bitcoin currently is, it is still accessible on many exchanges through spot trading with another cryptocurrency. You can visit the crypto market to see XRP trading pairs on Phemex.