Tron (TRX) is a blockchain-based protocol that seeks to “decentralize the web” by building a scalable, performance-focused, free, and global platform powered by smart contracts. Turning away from being merely a global content sharing platform, Tron has aspired to become a fully-fledged operating system supporting all kinds of custom decentralized applications (DApps). At the time of writing, TRX trades at $0.0625 per coin with a circulating supply of over 101.7 billion for a total market cap of over $6.3 billion. 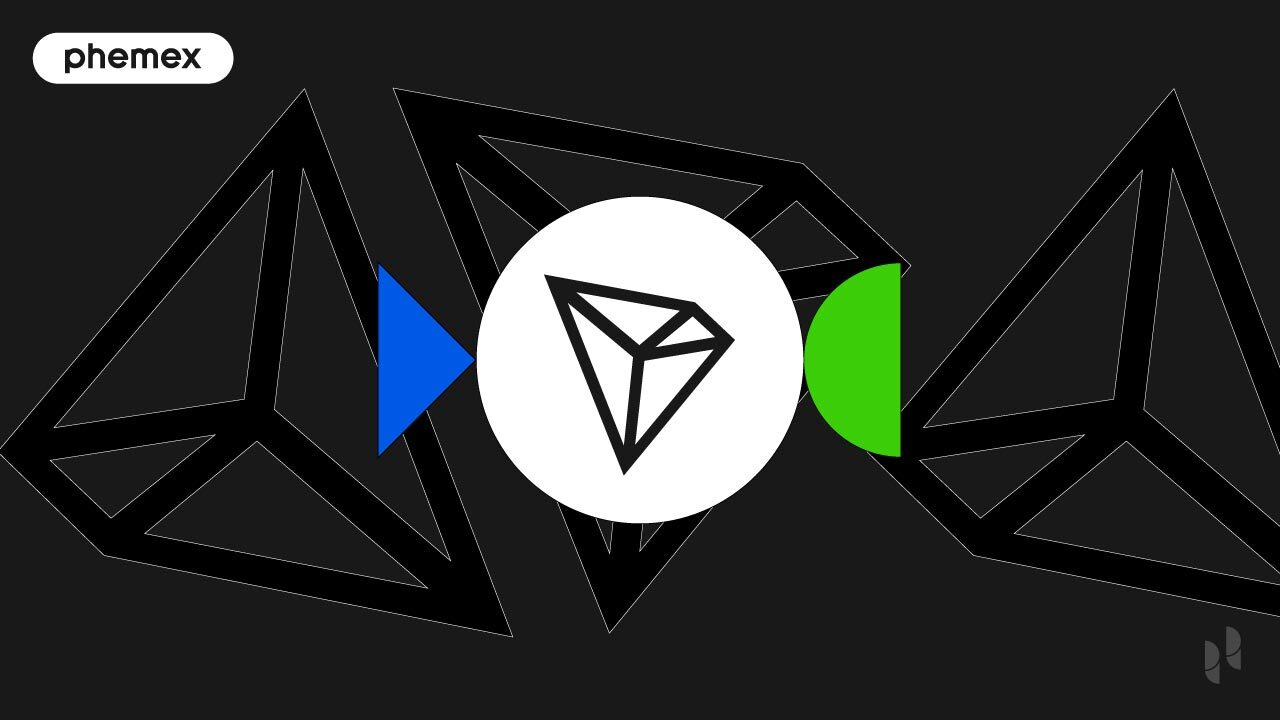 The Tron protocol was originally launched as a decentralized application on the Ethereum (ETH) blockchain. By 2018, through aggressive and sometimes controversial marketing, Justin Sun, the founder of Tron, propelled Tron into the top ten cryptocurrencies in terms of market capitalization. At its height, and during the crypto bubble peak in January 2018, Tron’s native token or coin, Tronix (TRX), reached a market capitalization above $15 billion.

This incredible success gave Tron Foundation members the motivation and resources to launch their own blockchain. Later that same year, Tron migrated from the Ethereum (ETH) network and the ERC-20 token standard to their own Turing-complete blockchain supporting smart contracts. It also features its own TRC-20 token standard, a technical protocol in the Tron network for smart contracts. Users can use this protocol to create tokens on the Tron blockchain. Tokens created by this standard are also compatible with ERC-20 tokens through the Tron Virtual Machine (TVM).

How Does Tron (TRX) Work?

The Tron Virtual Machine is a lightweight, stable, and scalable Turing-complete virtual machine running on the Tron blockchain. It can reportedly achieve 2000 transactions per second (TPS), compared to Bitcoin‘s (BTC) 7 TPS and Ethereum’s 50 TPS.

You can Now Trade TRON on Phemex!

However, readers should be well aware of Tron’s dearth of decentralization as a result of focusing more on speed and transaction throughput. Like the Binance Smart Chain, Tron is able to achieve high speeds and low costs because it’s a centralized blockchain. The network utilizes a consensus mechanism called Delegated-Proof-of-Stake (DPoS) that relies on a total of 27 validators or “Super Representatives.”

Furthermore, each time a block is produced, the top 127 TRX holders (Super Representatives + Super Partners) will share an extra 160 TRX in accordance with the votes each one receives. These voting rewards will also be redistributed to voters based on their voting ratio in the selection round after deducting the commission ratio, which is 20%. Tron users need to stake their TRX coins or freeze their accounts on the network if they want to receive a portion of the block rewards.

What Is the Tron Blockchain Used For?

Tron’s original promise was to “decentralize the internet” and bridge the gap between content creators and content consumers by eliminating intermediaries. However, it’s hard to say that Tron has achieved its original goals today. There’s virtually zero digital entertainment media hosted on the platform, and the project seems to have slowly but surely transitioned into being a standard centralized ecosystem for hosting decentralized applications.

Apart from the aforementioned projects and products, there are over 700 working DApps on the Tron public chain as of Q1 of 2020. The platform also has a community of more than 230,000 users. Some of the popular DApps include BZB mining, TronTrade, Uswap, and Blockchain Cuties (TRON).

In addition, Tron also created a sidechain project called DAppChain under the SUN Network Plan, which seeks to host DApps on Tron. The sidechain offers lower energy consumption, faster transaction speeds, and enhanced safety, thereby providing potentially unlimited capacity for Tron’s main network. DAppChain uses the same DPoS consensus and supports almost all functionalities of the mainchain. This design helps users adapt to the sidechain easily and allows developers to migrate or develop new DApps on the sidechain conveniently. Perhaps what attracts users the most is the 10,000 Energy per day that users can obtain by freezing 1 TRX on DAppChain, 100 times of the same operation on the mainchain. Users can utilize Energy to process smart contracts on the blockchain. This Energy is a resource that is then consumed after use.

Who Is Behind Tron (TRX)?

The founder of Tron is Justin Sun, a Chinese entrepreneur who is dubbed Jack Ma’s (founder of Alibaba) protégé. He is best known for having raised more than $70 million through an initial coin offering (ICO) during the height of the crypto bubble in late 2017.

Before starting the Tron Foundation, Sun formerly served as Chief Representative for Ripple (XRP) in Greater China, which gave Tron a much-needed reputational boost and put him in proximity to people who would later be of enormous benefit to the Tron ecosystem. He was one of the Davos Global Shapers in 2014, a World Economic Forum-backed network comprising of inspiring young people under the age of 30 who collaborate to address global challenges. He was also named in Forbes Asia 30 Under 30 Entrepreneurs in 2017.

In late 2021, Sun stepped down as the CEO of Tron and became a diplomat for Grenada. Since then, Tron has shifted to a decentralized autonomous organization (DAO) model, making itself a symbol of the emerging decentralized third-generation Internet (Web3).

Launched in late 2017, Tron took only about four months to reach a peak of $0.3 on January 5, 2018, before entering a dramatic bearish downtrend inflicted by the Bitcoin crash. TRX’s price fell to below $0.05 in February 2018. However, the subsequent rumor of Tron’s acquisition of the popular torrenting site, BitTorrent, fueled TRX, boosting its price to a second peak of about $0.094 on April 30. The Tron Foundation, a non-profit organization that supervises the Tron network, completed the acquisition in July 2018.

On the other hand, TRX’s price rise has also been deeply influenced by the PR efforts of the founder, Justin Sun. In 2019, Sun placed a record-breaking $4.5 million bid at the Glide Foundation and won the chance to have dinner with Warren Buffett. This bidding boosted the publicity for himself and Tron in the crypto community and sent TRX’s price up again. While the dinner was initially scheduled for late July 2019, Sun postponed it to January 2020, citing personal health problems.

The year 2021 saw another Bitcoin boom that catalyzed all other cryptocurrencies’ price rises, including TRX. While benefitting from this crypto uptrend, the news of Tron’s partnership with the PRC National Development and Reform Commission further sent TRX’s price up high, almost reaching a new all-time high. Tron was mandated to help advance China’s blockchain technologies in this partnership. However, several negative news concerning Tron broke out and prompted the TRX’s price to fall again. These negative news include eToro’s decision to delist TRX due to regulatory concerns and Sun’s resignation from the CEO position. 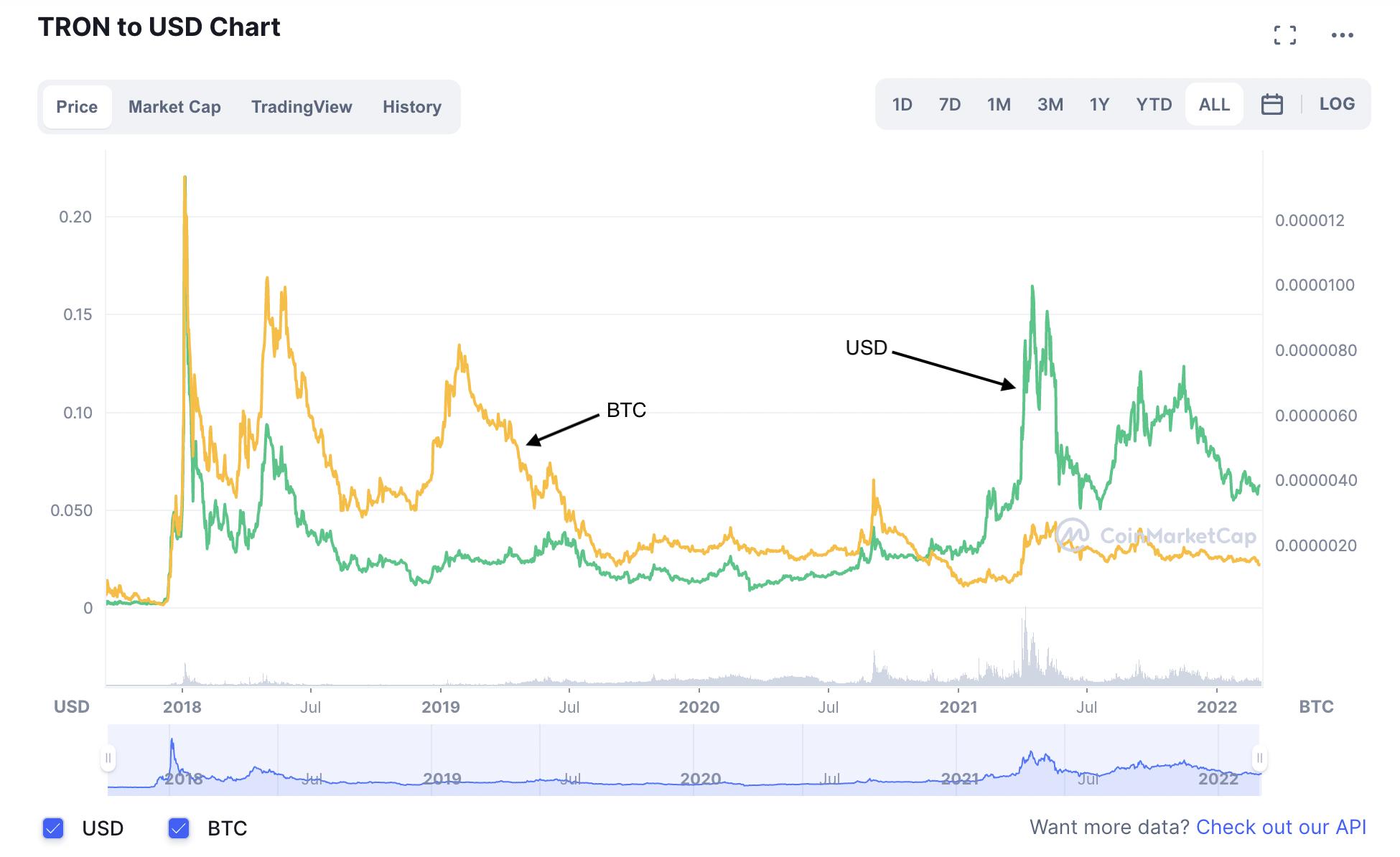 Nevertheless, TRX still managed to gain momentum in the midst of all these negative news and maintain a price above $0.05 throughout the rest of 2021 and until the present. At the time of writing, TRX trades at $0.0625 per coin with a circulating supply of over 101.7 billion for a total market cap of over $6.3 billion. TRX currently ranks #25 on CoinMarketCap’s cryptocurrencies leaderboard in terms of market cap.

What Is The Future of Tron (TRX)?

It should be noted that Tron’s achievements and development throughout the years are not without controversy. In fact, controversy has played a significant role in Tron’s history. The accusation of Tron having plagiarized their whitepaper, the negative news surrounding Justin Sun and Tron’s BitTorrent acquisition, particularly with regard to Sun being described as immoral, as well as an allegation of a critical flaw in Tron’s protocol design had somewhat affected the reputation and credibility of this project. The departure of Justin Sun then sparked a persistent downfall in price, which was further exacerbated by the negative crypto market situation near the end of 2021.

Where to Buy and Store Tron (TRX) Coins?

You can buy the Tron (TRX) coin on virtually all centralized cryptocurrency exchanges, including Phemex. Our exchange offers a clear and simple way to trade the Tron coin (TRX).

Besides, if you want to store your TRX coins in your own wallet and use them for day-to-day activities, you can use Tron’s official community-developed wallet, namely TronLink, a decentralized wallet that fully supports TRX, TRC-10, TRC-20, and TRC-721 tokens. Currently, TronLink’s number of users has already exceeded 10 million, and many notable public chains support it. However, if you wish to keep your TRX coins in cold storage, then you can use other more commonly recognized hardware wallet brands such as Ledger, Trust Wallet, Cobo Wallet, and more.

Tron is a blockchain-based protocol that aims to decentralize and democratize the web by building a scalable, performance-focused, free, and global platform powered by smart contracts. Despite several controversies, it has become a pioneer in the crypto space as it supports one of the world’s largest blockchain ecosystems for entertainment, gaming, trading, and file sharing after joining hands with BitTorrent. However, controversies around the project, its founder’s resignation, and the bearish crypto market have resulted in a persistent price crash that has yet to end. Hence, users are advised to be aware of the risks and do their due diligence before investing in the Tron project.