What Is EOS: A Complete Guide to EOS with Price Analysis

Launched in 2018, EOSIO (also called EOS.IO or EOS) is an open-source, third-generation blockchain platform that attempts to create a scalable platform for industrial-scale DApps. The platform has been dubbed the “Ethereum Killer” for aiming to tackle issues that Ethereum (ETH) and other blockchains face, such as low scalability, slow speeds, and high fees.

EOS is the native crypto of the EOSIO platform. The token’s current price is $4.60 USD with a circulating supply of 960 million tokens, for a market cap of $4.4 billion USD. The maximum supply is 1.05 billion tokens. 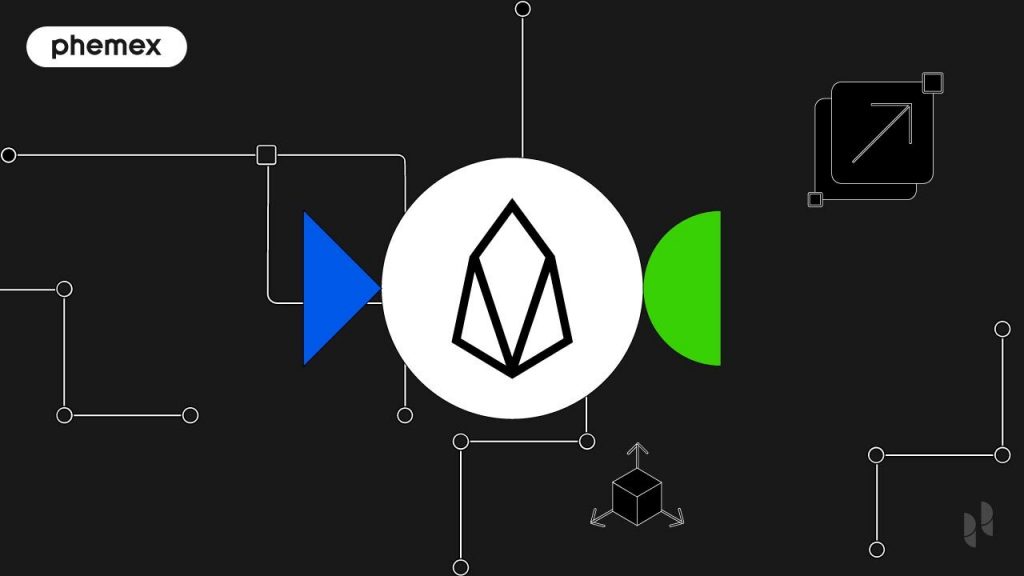 What Does EOSIO Do?

EOSIO is a native blockchain ecosystem for DApp development. EOS can process 3,000+ transactions per second (TPS), compared to 25 for Ethereum and only 7 for Bitcoin (BTC). Developers claim it can scale up to over 1 million TPS. A record 5,545 transactions were processed in a single block in 2020.

EOSIO set out to become the largest blockchain for DApp development. The parent company, Block.one, developed the following tools and resources to help developers build apps on the platform.

The EOSIO consensus system is based on proof-of-stake, but validators can become so-called “block producers” or “superdelegates” and obtain high voting power over the consensus mechanism. The EOSIO blockchain has 21 block producers. 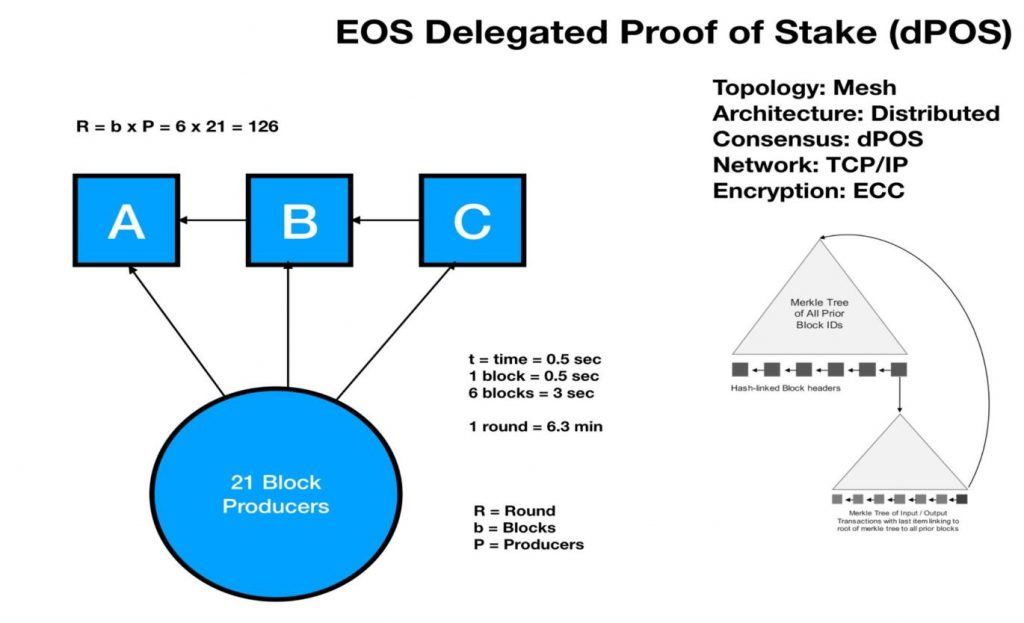 EOSIO block producers are elected from thousands of potential validators. Validators vote on new block producers and are paid for staking EOS on the blockchain. The staking reward system has an annual token inflation rate of 1%.

EOSIO’s blockchain structure is built to emulate an operating system, and is comprised of these components:

The resource consumption for storage, bandwidth, and computation on the EOSIO network is paid for using the native EOS token.

Validators and block producers are awarded based on the size of their share in the network. While transactions are free for users, DApp developers on the network have to pay for network consumption.

How Does the EOS Token Work?

Broadly speaking, the EOS token is similar to other cryptos: Users can send, receive, and hold funds in their wallets. More specifically, EOS was developed to solve scalability issues of second-generation blockchains, such as high gas fees, low transaction speeds, and scalability.

When users send transactions in Ether, they have to pay transaction fees known as “gas fees,” which skyrocket during peak congestion times. However, transactions on the EOSIO blockchain are free. Free transactions on the EOSIO network also make it worthwhile to send small amounts. For reference, a transaction on the Bitcoin network can cost as much as $50 USD, making it unsuitable for small transactions.

EOSIO’s delegated-proof-of-stake model differs from the Bitcoin and Ethereum proof-of-work model. Rather than rewarding miners for validating transactions, EOSIO rewards stakers who “rent” their computer power by staking EOS tokens in the network. Currently, over 55% of EOS tokens are staked.

EOS vs. Cardano. vs. Ethereum: Which Is The Best?

Cardano (ADA) and EOS both came after Ethereum and aimed to solve issues existent in the Ethereum blockchain such as scalability and high fees. Cardano was developed by Charles Hoskinson, the former CEO of Ethereum who left Ethereum after a dispute with Vitalik Buterin.

The area in which Cardano exceeds Ethereum and EOS is in TPS. Cardano was stress-tested at 257 transactions per second, but with its new “Hydra” layer, Cardano can split into 1000+ stake pools that can each process 100 TPS each. This means that Cardano can effectively scale up to 1M transactions per second and more. The scalability of the Cardano blockchain is infinite and only rivaled by Kadena (KDA).

Price wise, Cardano has outperformed both Ethereum and EOS in the last year with 2,000% YoY returns.

However, EOS takes some different approaches to its technology such as having an asynchronous communication method and parallel execution. Compared to both Ethereum and Cardano, EOS captured a great deal of more attention during its 2017 ICO.

What’s the Story Behind the EOS ICO?

EOSIO gathered a record-breaking $4 billion USD in 2017 during their initial coin offering (ICO), the largest in crypto history. For reference, Ethereum raised $18 million USD and Cardano (ADA) raised $63 million USD during their ICOs. This is especially impressive considering that EOS’s product wasn’t even live until January 31, 2018.

The EOSIO blockchain went live in June 2018, and the EOS token started operating on it. The project’s development was backed by billionaire investors like Peter Thiel and Alan Howard.

Research from 2021 showed that 21 large whale accounts strategically purchased EOS during the ICO to increase its value. This raised suspicion of wash trading and manipulating the value of EOS by buying inflated tokens and inciting others to buy them. Funds worth more than $815 million USD at the time could be traced back to only 21 wallets.

EOSIO’s parent company, Block.one, was sued by the U.S. Securities and Exchange Commission for conducting an ICO and offering unregistered securities. The company paid a $24 million USD penalty and was alleviated of any further prosecution.

Who Is Behind EOSIO?

EOSIO was co-founded by Daniel Larimer and Brendan Blumer, the founders of Block.one. Block.one is an American software development firm with offices in the US, the Cayman Islands, and China.

Blumer is a serial entrepreneur currently residing in Hong Kong. He started by selling virtual assets for gaming and co-founded Hong Kong’s Okay.com property agency. Daniel Larimer is a programmer who founded multiple crypto projects including Bitshares, a trading platform.

During the launch phase, EOS attracted attention after being mentioned by TV show host and comedian John Oliver, who ran a series on crypto on his show “Last Week Tonight”. The show poked fun at author and entrepreneur Brock Pierce’s endorsement of EOS, leading the platform to cut ties with Pierce shortly after.

Compared to blockchains like Ethereum, EOS’s DPoS model is more centralized, because only 21 block producers have the voting power to censor transactions or freeze funds. These 21 block producers are voted on and chosen by stakers on the network.

Wikipedia co-founder Larry Sanger, whose “Everipedia” project launched the “IQ” coin on EOS, has criticized EOS’s election process and the amount of power block producers wield. Sanger made a series of tweets claiming that Chinese delegators have the most control in governance on the EOS network. According to him, “there can’t be a continuation of app development on EOS as long as Chinese players control the network.” Nevertheless, the IQ coin is still running on the EOS network.

What Is the Future Roadmap for EOS?

In 2021, the EOS team started coding a new system called “EdenOS” to further decentralize the delegate selection process. EdenOS is a new democratic on-chain election system. The system aims to elect the best representatives using an online voting process were candidates are democratically elected over Zoom calls. Two trial elections were held in May and July 2021, and the first real election was held in October 2021.

The EdenOS platform will be blockchain-agnostic, and will be developed for both the Ethereum and Polkadot (DOT) ecosystems. 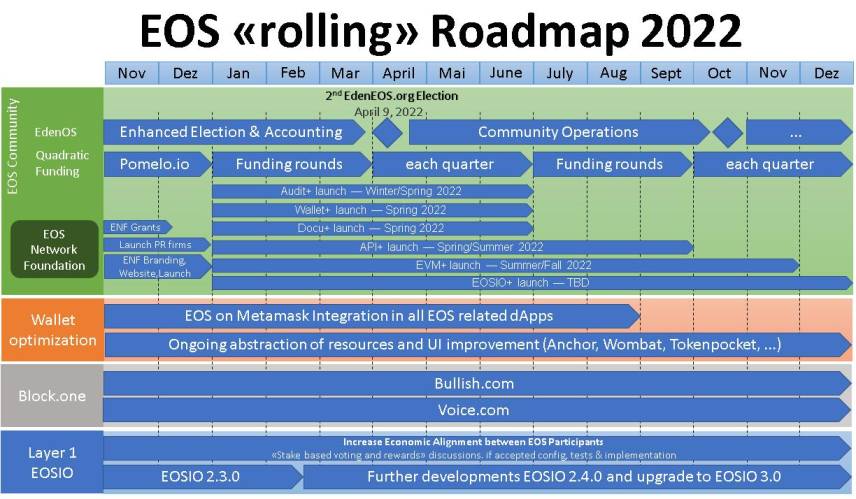 EOSIO is also launching its token on MetaMask, giving users the ability to swap tokens using the most popular DeFi extension.

The bearish case for EOS is the centralization. Some of EOSIO’s competitors, such as Solana (SOL) and Cardano (ADA), offer similar transaction speeds and scalability, without the downsides of block producer centralization. However, if EOSIO successfully implements new updates such as EdenOS that aim to democratize the delegate selection process, EOS’s price could appreciate.

EOSIO is a third-generation blockchain with smart contracts and proof-of-stake consensus, and offers zero-fee transactions and high scalability. However, EOSIO’s largest stakeholders retain overwhelming power over the blockchain. EOSIO has historically underperformed compared to competitors, such as Solana, Cardano, and Polkadot.

EOSIO had one of the most successful token launches in crypto history, but its initial success did not result in further adoption and price appreciation. The token dropped from the 7th spot in 2019 to the 44th spot in 2021 by market cap.

Future price appreciation for EOS will depend on the team’s decentralization efforts, such as the implementation of EdenOS, a decentralized voting platform for delegates. EOS plans to integrate EdenOS on its mainnet by Q4 2021 and carry out larger elections in 2022. Integration with MetaMask could also prove beneficial because EOS is compatible with both Ethereum and Polkadot blockchains.