What is Olympus DAO (OHM): A Rising Star in DeFi or a Ponzi Scheme?

Launched in March 2021, Olympus DAO is a decentralized finance (DeFi) infrastructure that aims to provide a transparent and stable crypto ecosystem for its users. OHM trades at $28 per token with a circulating supply of 1.66 million for a total market cap of $46 million. 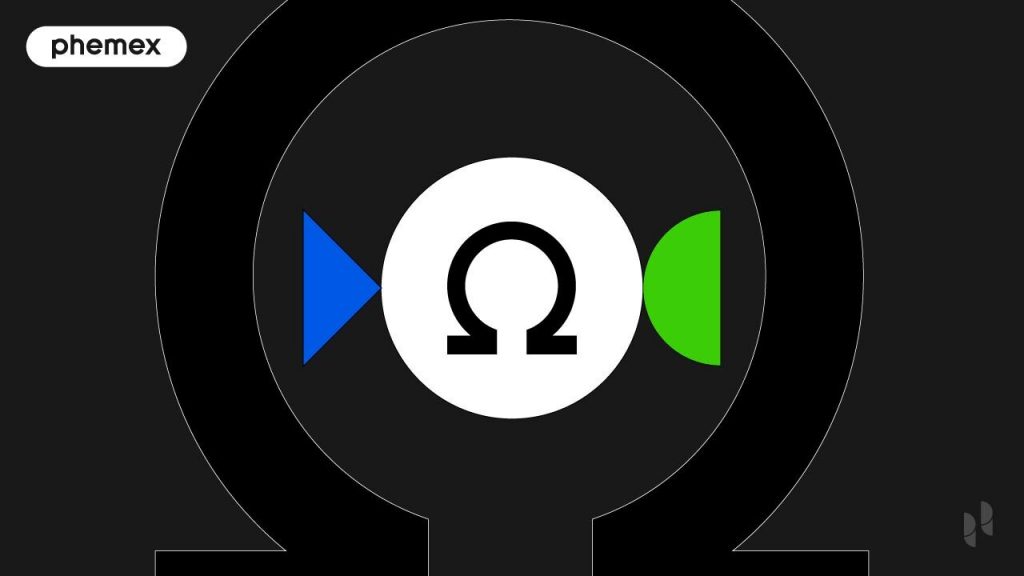 What Is Olympus DAO?

Olympus was launched in March 2021 on the Ethereum (ETH) network by a pseudonymous team led by “Zeus.” It’s a protocol that handles decentralized reserve currency (also known as non-algorithmic stablecoins).

Olympus is governed by a decentralized autonomous organization (DAO), Olympus DAO. A DAO is one of the most exciting features in the DeFi world as it’s basically an entity with no central leadership and is instead managed by its users.

Olympus DAO provides an alternative liquidity mining strategy for users and looks to promote OHM as a currency with constant purchasing power. Olympus utilizes a unique approach via the aforementioned digital-asset-backed currency to create a free-floating market in its ecosystem. In other words, Olympus attempts to make OHM immune to inflation by supporting OHM with stable assets in the crypto market. At the same time, OHM is sold or minted according to the needs of the crypto market.

Essentially, the operations or mechanisms mentioned above show that Olympus plans to become the central bank in the crypto world with high-quality encrypted native assets in the treasury that are independent of USD or other fiat currencies. With long-term goals in mind, Olympus encourages their users, or Ohmies, to invest in OHM coin with patience in order to enjoy more attractive rewards in the future.

What is OHM Coin?

OHM is the native token of Olympus, an ERC-20 token that’s compatible with other Ethereum-based projects. Olympus stakers are nicknamed Ohmies.

Olympus backs its OHM tokens in the treasury using digital assets such as DAI. Hence, the price of OHM rarely falls below a certain threshold of 1 DAI. One of the main features of Olympus is that it offers an abnormally high Annual Percentage Yield (APY) of up to 8000%. It achieves this through the Olympus protocol, which is part of the DeFi 2.0 movement. The protocol maintains its Liquidity Pools (LPs) sustainability through bonding and staking mechanisms. This protocol-owned liquidity model is a huge success and has risen to multiple Olympus forks.

What Does OlympusDAO Do?

OlympusDAO acts as the distributor and manages the fully mortgaged and free-floating asset OHM. The workflow of OlympusDAO begins with its treasury’s revenue. OlympusDAO first controls the OHM supply by growing its treasury through bond sales and LP fees. The treasury will grow when users buy the bonds or LP tokens available on the platform.

OlympusDAO also handles treasury growth. As OHM’s floor price is pegged to DAI, OlympusDAO will mint or sell OHM based on its value relative to DAI. When OHM is worth less than 1 DAI, OlympusDAO will rebuy the bonds from users and burn OHM. As a result, the amount of OHM will be reduced, consequently leading to an increase in the value of OHM.

When OHM’s value is higher than the floor price of 1 DAI, the protocol takes it as a signal that there’s demand for more OHM. Thus, the Olympus treasury will continuously mint OHM as staking rewards and sell them through the bonding process. In this situation, users are also encouraged to stake their OHMs to enjoy the high APY and token rewards. This loop system is the core idea of OlympusDAO. 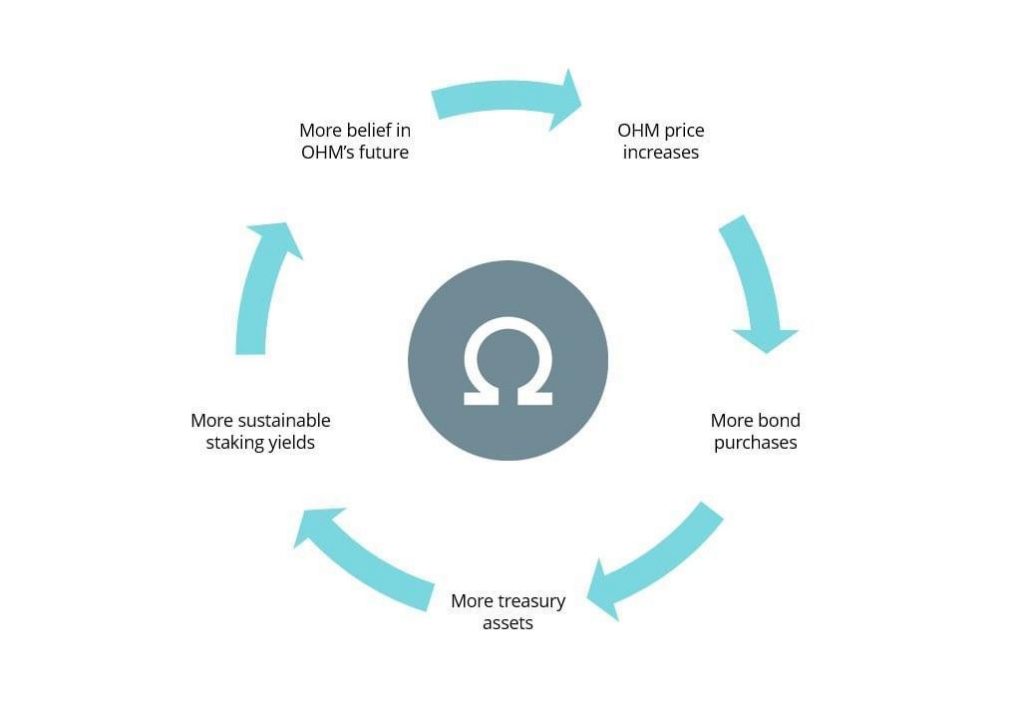 The mechanisms of OlympusDAO are formed by two significant steps: bonding and staking.

Bonding is the process of buying bonds offered by OlympusDAO. Users who buy these bonds will enjoy discounts when buying OHM. It’s also an alternative way for users who cannot afford OHM to become OHM holders. Initially, DAI was the only stablecoin supported by Olympus. Thus, users who could not afford OHM with fiat may stake their DAI in the Olympus treasury and receive OHM according to the specific exchange rate. However, more stablecoins and other cryptocurrencies are now supported by Olympus, including FRAX and LUSD. In addition, OlympusDAO also accepts LP tokens such as OHM-DAI and OHM-FRAX. These assets help OlympusDAO to control its treasury through Permanent Capital Vehicle (PCV). The function of the bonding mechanism is to reduce the liquidity of OHM in other exchanges by limiting the bonding users with a lock-up period of five days. The lock-up periods will mitigate the new bonding users’ direct sell-off and help improve the liquidity of other projects on its platform.

Staking is the process of staking OHM into the Olympus treasury by OHM holders when OHM’s value is higher than 1 DAI. OlympusDAO guarantees that this process offers new OHM rewards to stakers through rebasing and offering a high APY. Currently, the APY is at a very high percentage of approximately 7,055%.

Who Made Olympus DAO?

Olympus was founded pseudonymously by “Zeus.” The operation team behind Olympus remains unknown. The intention is to give prominence to decentralization by emphasizing the team as part of the DAO. There are no CEOs, employees, and central authorities in the entire ecosystem. The entire operation is dependent on DAO governance. Participants in the DAO would not be restricted by any laws and regulations and instead are under the control of smart contracts or the protocol’s terms and conditions. In OlympusDAO, the participants work together toward a similar goal, and all decisions are the outcomes of the participants’ votes.

Until April 2021, OHM was trading at around $384 to $830. The price then peaked at a bullish trend peak of $1,415 in April 2021. Positive cryptocurrency news broke out around this time. Institutional investors like Elon Musk’s Tesla and Michael Saylor’s MicroStrategy were reported to have invested billions in Bitcoin (BTC). Bitcoin’s price increase also positively affected the entire cryptocurrency market, prompting an increase in OHM’s price. However, the token’s price dropped significantly to $165 at the end of May, following negative cryptocurrency news regarding the cryptocurrency ban in China and Tesla’s suspension of accepting Bitcoin as payment. The price recovered slightly but fell again at the end of July 2021. OHM reached a second highest peak in mid-October with $1,334 as the crypto market recovered. However, OHM’s price crashed, dropping over 95% from over $1000 to a price of under $28, mainly due to the overall bearish trend in the crypto market. There is no sign of token price recovery as of March 2021.

OHM currently ranks #2893 by market cap, falling over 2000 ranks since its price crash. OHM has a circulating supply of 1.66 million tokens. With a price of around $28 at the time of writing, the market cap is about $46 million.

While the crypto market’s overall bearish trend was the primary reason for the price crash, there were other factors that played a role in tanking OHM’s price. The falling prices in the broader crypto market resulted in a series of liquidations of leveraged long positions. OHM was also a victim wherein the liquidations put significant selling pressure on OHM holders. As a result, investors and traders in the Olympus community were taking profits from their OHM positions by exiting and selling OHMs for other cryptocurrencies. One sale in January 2021, in particular, involved the trading of under 82.5 thousand OHM for almost 11.4 million DAI on the decentralized exchange (DEX) SushiSwap (SUSHI).

What Is the Future for Olympus DAO?

The (3,3) meme introduced by Olympus is also a topic that gained considerable attention on Twitter in late October 2021. This meme comes from Olympus’ game theory. The available strategies in the Olympus system are shown in the figure below for users’ reference. The strategies in the system include staking (represented by “+3”), bonding (represented by “+1”), and selling (represented by “-1”). Combinations with a higher total value (e.g., (3,3) which means pure staking) will result in a more return while a combination with a lower total value (e.g., (-1,-1) which means pure selling) will have lower or even zero returns. Various prominent investors and crypto users used this (3,3) meme in their tweets or added “(3,3)” at the end of their Twitter handles. The (3,3) meme encourages people to “buy and stake OHM.” Through this strategy, users can keep earning high returns. As Olympus has a very strong community (partly due to its DAO), this strategy has attracted various new users who are curious about the significance of “(3,3)”.

However, numerous accusations and doubts about the project’s underlying mechanics have risen again amid OHM’s bearish market situation. There are users that claim the decentralized reserve currency that OlympusDAO handles and the (3,3) meme from Olympus’ game theory are nonsense. Furthermore, the abnormally high and guaranteed investment returns from staking in Olympus made people wonder whether this project is a Ponzi scheme.  Note that this form of fraud only works when new investors add money, which is then used to pay older investors. Now, with the extended price crash, it seems the suspicions of Olympus being a Ponzi scheme were not entirely unfounded. Nonetheless, the project is not dead yet. The developers are still working on the project. For example, the team recently added new bonds and provided a sneak peek into their new dashboard. Nonetheless, it’s difficult to say if Olympus will regain its previous highs as most cryptos do not recover after a prolonged crash.

In conclusion, Olympus brings to the table an innovative protocol with bonding and staking mechanisms that have contributed to the OHM token’s value. The platform also offers an unusually high APY of over 7,000% for users staking their OHM tokens on the platform, arousing suspicions on whether the project is a Ponzi scheme. It’s undeniable that the protocol’s design has contributed to the DeFi 2.0 movement, wherein various projects have even forked Olympus’ mechanisms to optimize their benefits. However, the recent bearish trend in the crypto market and the series of liquidations and OHM token sales have caused an extended price crash and stunted the project’s growth. Hence, users are suggested to do their own research and assess their tolerance for risks before participating in OlympusDAO.