Bitcoin: Why It Isn’t A Ponzi Scheme

Debit cards, credit cards, FinTech, cell phones, Internet, and now blockchain and cryptocurrencies have all opened up various pathways for cyber criminals, scammers, and nefarious actors to siphon money from innocent people. All the above innovations provided creative criminals with new ways to trick people into being able to get 1000% gains on various investments, whether they called you from a random phone number, sent suspicious text messages, convincing emails, and now links and airdrops.

However, many of these opportunities are baseless and fradulent. With cryptocurrencies and blockchain in particular, it allowed people to supposedly creating booming new startups and shitcoins that they could shill and subsequently sell, famously referred to as pump and dumps.

In addition, when people encounter something new or something they don’t understand, like cryptocurrencies and blockchain, there’s often mistrust and a need to tie this new thing to something familiar. Bitcoin is undoubtedly no exception. One familiar concept that Bitcoin and many cryptocurrencies often wrongly get associated with are Ponzi schemes. What Is A Ponzi Scheme?

A common variation of a Ponzi scheme involves a person posing as a portfolio manager taking funds from investors and passing these funds off as profit or income to pay back earlier investors. This portfolio manager also ensures that they allocate themselves a significant portion of the investment coming in. This type of fraudulent investment management service involves the portfolio manager manipulating the entire set-up for their own gain. Ponzi schemes only work as long as new investors are adding money, which is used to pay back previous investors creating the illusion that they’re making a profit.

The Wolf of Wall Street is one of the more famous imitations and representations of financial Ponzi schemes.

For new investors to be willing to continue contributing money, a Ponzi scheme must fulfill certain criteria. First, there must be a level of secrecy. Investors expect the portfolio manager to allocate investments into various profit-yielding activities. Given that this is not actually happening, there must be an element of obscurity to hide where funds are going or where “profits” are coming from.

What Is A Pyramid Scheme?

A Pyramid scheme is a specific type of Ponzi scheme. A Pyramid scheme is generally referred to as a type of recruitment strategy that involves payouts to recruiting new members to join a business. One problem with Pyramid schemes is that the company’s cash flow is not supported by tangible or real goods or services, but rather by money earned from the next recruit. For example, a person finds five friends to join a company, each friend has to pay $1o to join the company. Then those five friends go out and recruit 10 of their friends, thus taking the fees from the new recruits.

A Pyramid scheme generally ends when the members at the top of the pyramid take a massive payout, causing a cascade of people in the business trying to liquidate their money, thus leaving the newest recruits dead in the water. 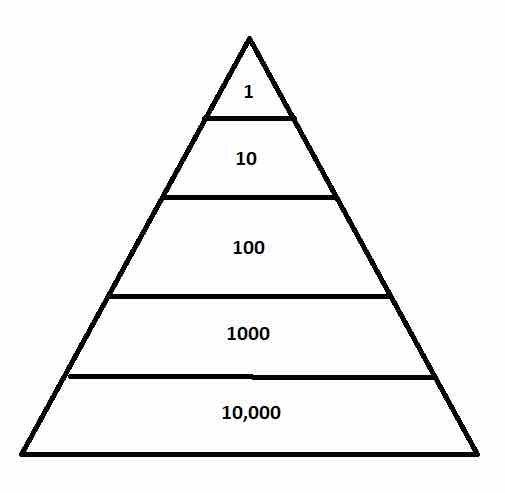 How Is Bitcoin Not A Ponzi Scheme?

First, this is simply incompatible with Bitcoin’s founding, as an open-source peer-to-peer currency, which was cretaed as a result of the 2008/2009 Financial Crisis that began in the US. The first Bitcoin block had the phrase “The Times 03/2009 Chancellor on brink of second bailout for bank” engrained which was a criticism of the instability caused by fractional-reserve banking and a loss of trust in centralized intermediaries such as Lehman Brothers.

Bitcoin is a decentralized peer-to-peer currency that can be used to transact with all over the globe. However, over time it has morphed into a store of value. Bitcoin’s decentralized nature alone differentiates it from a company-ran Ponzi scheme. This is the first reason why Bitcoin is not a Ponzi scheme, and that’s because it’s not run by a company, and thus its value is determined purely by its fundamentals and the market that determines its supply, demand, and its value.

Bitcoin has these properties because of the blockchain, a technology revolutionized by Bitcoin’s creation, made possible by advances in cryptography and computer science.

The blockchain is entirely transparent; anyone, at any time, can inspect the public ledger to see how much Bitcoin is moving and where. Therefore, there’s no hidden agenda behind the scenes occuring with CEOs and upper management discussing ways to strategize and maximize the profit they make with Bitcoin.

On the other hand, Ponzi schemes must have a level of complexity to obfuscate transactions not only from investors but also from regulators. In other words, such projects hide behind complicated financial procedures and accounts. Bitcoin, on the other hand, requires minimal computer skills and is generally accessible by everyone. Bitcoin can be easily purchased with fiat or traded for another cryptocurrency. Once an order goes through, the buyer is now invested in Bitcoin. Users buy and sell at prices set by the crypto market rather than arbitrary numbers created by a criminal mastermind.

For Ponzi schemes, the market does not determine the value of the Ponzi scheme, but rather by fake cash flow. Bitcoin, on the other hand, has a market that’s active 24 hours a day, people trading for and against its value, people sending Bitcoin to others as payments, and people HODLing it for the long-run. There’s also been creative financial products and innovations created on top of Bitcoin such as Lightning to make it fit modern use cases.

Lastly, Ponzi schemes often return suspiciously consistent returns to initial investors. Those who fall victim to these schemes do so because they’re seemingly receiving a steady profit on what they have put in, and why would anyone question money coming in. However, this is not the case with Bitcoin. The volatility of the market means that if as a day trader, it’s just as possible to lose or win any amount at any time. Based on Bitcoin’s history, consistent returns are only likely after 4-year periods or longer, a much more reasonable sign of a solid investment and less so of a get rich quick scheme.

In summary, Bitcoin’s decentralization, purpose, blockchain transparency, and market demand are the primary reasons why Bitcoin is not a Ponzi scheme.

That being said, just because Bitcoin itself isn’t a Ponzi scheme, it doesn’t mean that there aren’t malicious people out there wanting to take advantage of those trying to get into Bitcoin. To avoid falling for scams, it’s always best to only trade on trusted platforms such as Phemex. There, you have more control of your funds and can see where and how your Bitcoin is moving.

The most recent example of a Bitcoin Pyramid scheme scam and ponzi is a situation currently unfolding in Kazakhstan where a mining hotel business platform called Bincloud was luring investors through popular messaging apps and keeping their funds for themselves. So as you can see, Bitcoin itself (the asset) is not a ponzi, but rather people have created companies and businesses that illicitly use it for ponzi-esque purposes. This is the main takeaway that traders, researchers, and crypto-curious individuals should pay attention to.

What About Cryptocurrency Ponzi Schemes?

What happens in common cryptocurrency Ponzi schemes is generally a project or company creates a token that they then push on a certain blockchain, raise funds, and then rug pull the new investors. This happened last year with a project called Squid Token. It can also happen with NFTs where an unknown NFT creator can falsify an NFT minting and then completely not deliver on the NFTs and subsequently run away with the money. This also happened last year with a project called Pixelmon.

On a slightly different note, cryptocurrency Ponzi schemes are generally discovered in bear markets such as when centralized platforms halt withdrawals, go insolvent, or disappear like what happened with Three Arrows Capital. Therefore, there’s not a one-size-fits-all definition of cryptocurrency Ponzi schemes, however, one can identify them through the actions they take in bear markets, when their financial situations are made public. That’s why truly decentralized projects, as well as regulated and trusted exchanges find themselves in good positions during the bear markets.

The most recent example of a cryptocurrency Ponzi Scheme was from a company called Forsage, a decentralized networking platform, which recruited users to deposit money onto their platform. Forsage received deposits of up to $300 million from millions of users worldwide. What makes this case a Ponzi scheme was that the deposits made to the platforms were taken as profit by the management and higher-ups in the company, and not given back to the users as promised.

The cryptocurrency and blockchain spaces do indeed have bad actors, just like any market and industry, that’s why it’s important for newcomers and investors to exercise proper due dilligence and listen to reviews, audits, and neutral sources when evaluating certain cryptocurrencies. Phemex, of course, has a plethora of resources to help you out with this on our Academy, Blog, Learn & Earn, and User Guides.