What Is A ‘Head Fake’ In Crypto Trading? How To Spot Faux Breakouts 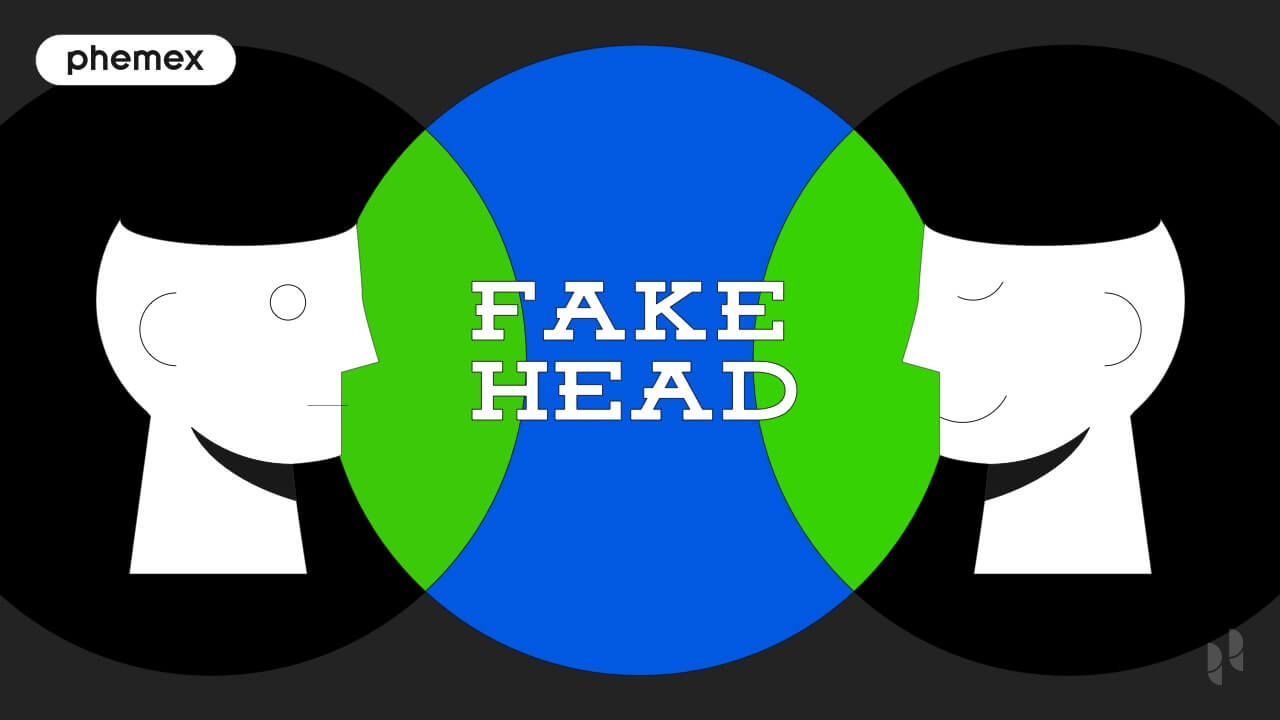 Have you ever bought a coin because it looked to be on a bullish trend–only to watch in dismay as it reversed to the downside soon after?

Or, have you ever panic sold your crypto during a flash crash, believing it’s going to fall all the way down…only to watch it regain value and go even higher?

If the answer is yes to either questions, you fell for a head fake.

Head fake is a jargon that crept into the crypto community from the sports community. In basketball, a head fake is when the team goes in one direction and then reverses to confuse their opponents.

In boxing, a head fake is when a boxer throws a right jab to get a player’s defenses up, only to throw a left jab and then knock them out. As it gets more advanced, they make double or triple fakes.

As a crypto trader, you have to be aware of head fakes that occur in crypto daily. Most people who fail at trading do so because they don’t have the right trading indicators or technical analysis (TA) tools that would allow them to identify head fakes, while successful traders take their time and analyze the situation using pattern recognition.

This article will train you to identify bullish and bearish head fakes that could lead you into placing rash trades without doing proper research (DYOR) or analysis.

What Is A Head Fake In Trading?

Head fakes bait traders into making the wrong trade. If a trader is feeling bullish when crypto makes a 10% move to the upside, they can place a long trade, only to find themselves liquidated or at a loss once the price crashes by 10%.

The 100-day SMA and the 200-day SMA are indicators that can tell us historic support and resistance levels–the head fakes will frequently occur near those levels.

Head fakes in trading mostly occur in sideways markets when there is no clear trend direction. If the average yearly Bitcoin price is at $30,000 and Bitcoin is stuck in that area for months, it becomes harder to predict the future direction of Bitcoin at that point.

During trending markets, head fakes are less common. If we’re in a strong bull market, and Bitcoin/alts are making a new all-time high weekly, it’s easier to predict that the trend will continue to the upside and a reversal is not likely.

Similarly, in a long bear market (also a trending market), the trend will likely continue down without any major head fakes.

Psychologically, a head fake can give traders an emotional rush, provoking him to place a wrong trade. Two extreme emotions work against a trader, especially when he is trading a volatile asset like crypto: greed i.e. FOMO (fear-of-missing-out) and fear, manifested most often through panic selling. FOMO can cause a trader to buy high or open a long position in a downtrend, while fear can cause a trader to sell prematurely, causing him to miss out when prices climb higher.

There are two types of head fakes we can identify in crypto: bullish head fakes and bearish head fakes. The two are important for traders because they can lead to a loss of funds. We will illustrate both using Bitcoin as an example below:

An example of a bullish head fake can be seen in the diagram below, showing the most recent Bitcoin head fake on the daily chart:

Bitcoin’s price was trading sideways in the $35,000 to 40,000 range, until a breakout to $48,000 occurred in April (circled red) and the price quickly collapsed in the following months.

During the push past the resistance level, traders who believed that the trend would continue to the upside were baited into trading a faux breakout, just before the momentum turned bearish and prices spiraled downward. 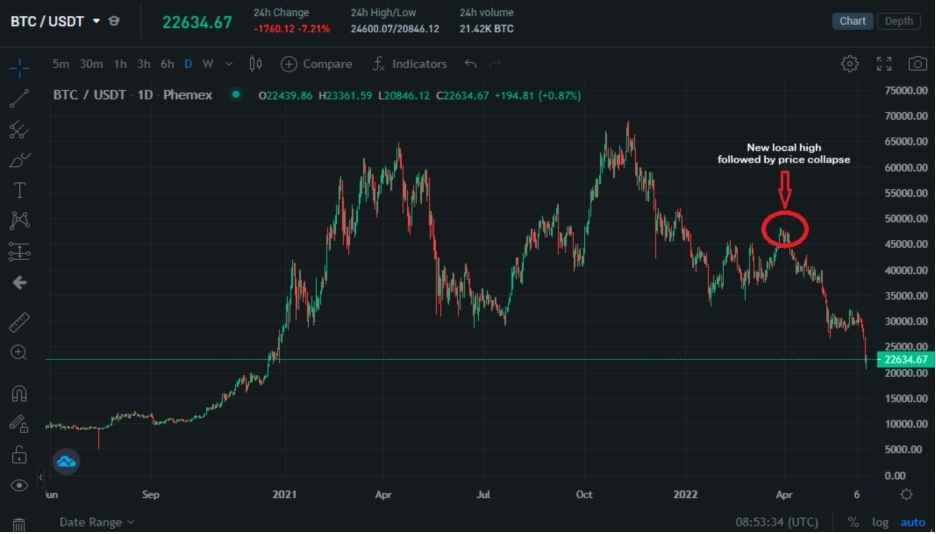 Bitcoin’s largest “breakout” of 2022 ended in a reversal.

A bearish head fake is best illustrated during a flash crash–a sudden collapse. Bitcoin, and altcoins in general, have had multiple flash crashes when prices tank by more than 40% in a day.

The most recent example of a bearish head fake for Bitcoin was in March 2020 during the onset of COVID19, when it crashed from $9,200 down to $5,100 within the span of a day. This represented a loss of nearly 50% for people who sold the bottom: 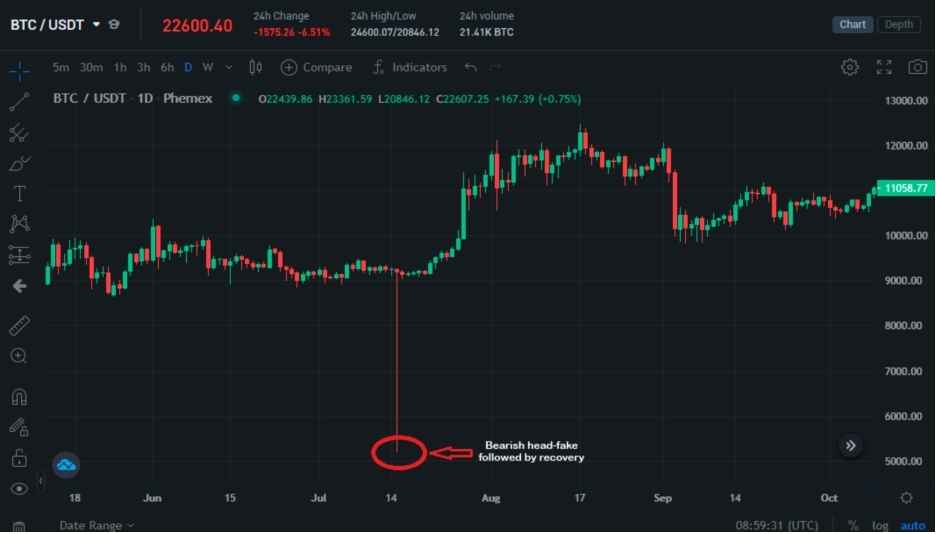 Bitcoin’s flash crash of nearly 50% ends in a full recovery.

While the crash baited traders into believing Bitcoin could possibly go to zero that day, it quickly recovered and this recovery was followed by gains in the coming days.

We can see by the illustration above that the candle was wicked (i.e. not a solid candle), which indicates that Bitcoin recovered during the same day and the selloff was a head fake.

How to Spot Head Fakes?

Spotting head fakes is the hardest thing a trader can do because it requires effort, dedication, and experience. The experience factor should be emphasized, because as a trader gains experience in the market, they are better skilled at recognizing head fakes based on historic head fake trading patterns.

An effective head fake trading strategy is to understand what drives crypto price action at the core level. Crypto is now a trillion-dollar industry, intrinsically connected to the world’s stock markets. If the world economy is in bad shape, this will likely be reflected in the crypto markets.

The largest crypto by market cap, Bitcoin, is traded on Wall Street by large banks and trust funds that control trillions of dollars worth of assets. If the US stock market enters a recession, asset management companies will likely want to cover their losses, and start liquidating their crypto.

This was proven true during the 2020 to 2022 bull market in crypto that paralleled the largest bull market on the stock markets in history. Once the stock market started correcting, crypto followed. It is more important for budding traders to be aware of the state of the world economy and how it affects crypto, than to know to use the one thousand and one technical indicators out there.

Likewise, most altcoins correlates positively with Bitcoin in terms of price action, unless there is project-specific news related to those cryptos such as institutional investment or a security breach/hack that could cause prices to spike or dip respectively.

Long-term indicators can help a trader identify major support and resistance levels. Despite being aware of events in the world economy, a trader should use indicators that place an emphasis on long-term data to identify key levels in which head fakes could occur.

Stick to the 1D (daily) or 1W (weekly) chart to analyze current price levels compared to historic price levels and determine the future direction. The best long-term indicators for crypto trading are:

These indicators can help traders determine if the current price action is justified i.e. if the price of Bitcoin has gone down significantly and we can expect a reversal and vice versa.

To identify trending markets, traders can use the indicators listed above including indicators such as the Klinger Oscillator (KO) and True Strength Index (TSI) that directly measure the strength of the trend.

Head fakes are meant to confuse traders but they are never caused by accident. A careful trader knows how to gauge the sentiment in the markets and place trades accordingly.

Experienced traders who’ve been in the crypto business for years can instinctively spot head fakes, but even they can be caught by unpredictable events due to the volatility of the industry.

The best defense against head fakes is to understand the macro outlook, use long-term indicators to verify trading bias, and identify trending markets when the direction of the price action is transparent.