Bitcoin (BTC) is worth six million times as much as since it first started trading: If a person bought $1 worth of Bitcoin when it started trading in 2010, they would have made over $6,000,000 at current prices. How many people got the full six million x run up of Bitcoin? Almost none. This is partly because most early traders sold at some point.

Traders sell for two reasons: to take profit or to cut their losses. If a trader takes profit, it means their exit price was higher than their entry price. If traders sell at a loss, they are likely panic selling. 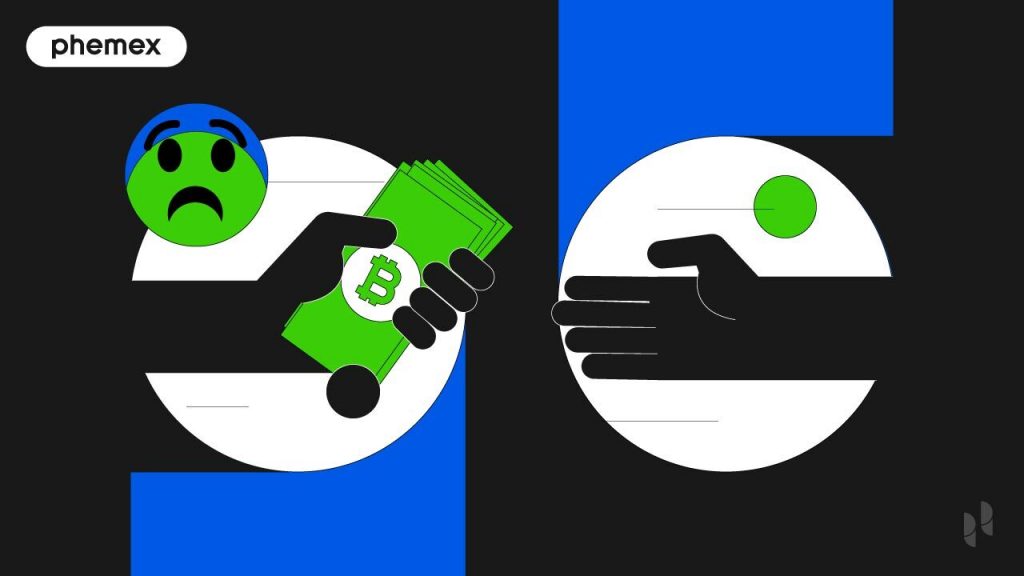 What Is Panic Selling?

Panic selling is the act of selling due to fear of losing money. If a trader panic sells, they won’t be able to re-gain their losses if the price recovers or they have to buy back in again.

Crypto prices go up when traders buy en masse (the buy pressure exceeds the sell pressure). The opposite is true when traders sell en masse (the sell pressure exceeds the buy pressure).  When markets drop suddenly, it can be scary for investors. However, making decisions that are mainly driven by that fear can be risky, given that a temporary bear market may not be indicative of overall trends. It is important to keep a more long-term perspective in mind.

Panic selling is a leading cause of bear markets: The same way a crypto goes up fast when more people buy, it can go down just as fast as people sell. This price action in crypto is best illustrated by the “Fear and Greed” index. Investors buy for greed, to get higher returns; and they sell for fear of the price going lower and ending up at a loss.

How To Avoid Panic Selling?

There are several ways to avoid panic selling and deal with bitcoin and other crypto selling panic:

People panic sell because they have an emotional attachment to their money. If they invest $1,000 that they can’t afford to lose, they will likely panic sell at the first pullback. Maybe they need to pay rent, buy food, pay off student loans, or purchase the latest iPhone. If a trader really needs their money, they are prone to panic selling the minute it drops.

Traders who have already made millions, on the other hand, can comfortably invest hundreds of thousands and not even check the price, because they don’t need that money immediately.

Treat crypto investments similar to paper trading. You want to invest money that you can afford to lose and that you won’t instantly need. Unless you’re absolutely certain that the crypto will deliver long term, there is no reason to be investing with money you can’t afford to lose.

This principle applies no matter the crypto you’re investing in. Even though Bitcoin is the largest and safest crypto asset to hold long term, it can still drop significantly in the short term and cause you to lose money.

When there is no emotional attachment to the money you’ve investing, you’re likely to make more rational decisions and hold for months or years instead of holding for mere days or hours. The longer you hold your crypto, the more likely you are to exit at a higher price than your entry price. If you don’t want to be burdened by the emotional turmoil of red candles, invest with money you don’t need.

Bitcoin launched at a fraction of a cent and reached an all-time-high of $69,000 in 10 years. The few traders who held from the start are mostly billionaires and millionaires. Satoshi‘s wallet is now worth close to $60B. He still hasn’t sold a single Bitcoin.

Prices like $10,000 and $60,000 would have seemed stratospheric to people who invested in the early days when Bitcoin was mined on laptop GPUs and people could buy whole Bitcoins for less than $1.

Bitcoin and altcoins like Ethereum (ETH) have dropped significantly, even in recent times. During the Covid dip in March 2020, Bitcoin dropped to $3,700 and Ethereum to $87. Bitcoin has since done a 15x, and Ethereum did a 55x, from their low to their new all-time-highs in less than 100 weeks.

While the news media and critics might create noise over temporary Bitcoin fluctuations, a wise trader keeps a long-term perspective on the price since the very beginning.

Here is a list of average yearly Bitcoin prices since it’s early inception:

On a 3-year scale, Bitcoin has been on a steady rise since it was created until the present moment. However, only people who timed the markets perfectly or held for 5+ years have made a significant profit.

This is best illustrated using a yearly log chart. To gain perspective on Bitcoin’s rise (and the whole crypto market tied to it), open up the monthly BTC/USD chart since the early days of Bitcoin:

What you will notice is that only the 2018 and 2021 bull runs stand out, and Bitcoin seems flatlined before that. However, if you press “Alt + L” on TradingView, it pulls up the log chart which gives us a better perspective on the meteoric rise of Bitcoin and how those early years were actually more volatile: 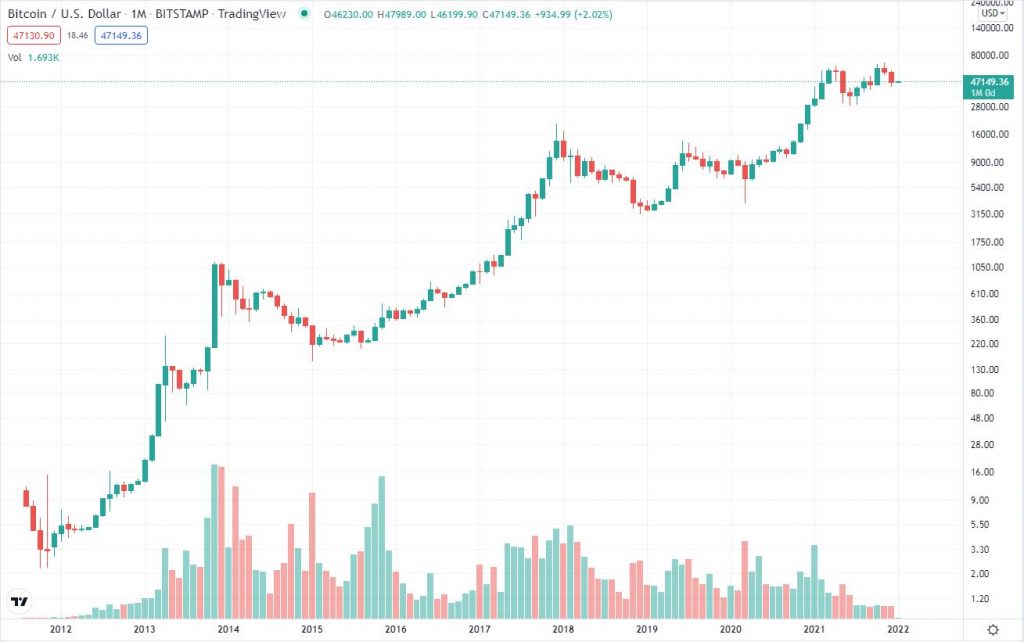 Notice how the bull run in 2013 and 2014 actually exceeds the percentage gains of the latest bull run, despite the price of Bitcoin being significantly higher now than the early days. This is because as more money enters the ecosystem and the asset is legitimized, it is difficult to move at a higher market cap.

Dollar cost averaging is a buying strategy to help you even out your entry price when you invest in a crypto long term.

The DCA strategy involves buying and selling at a fixed date every month so that your entry price is evened out among market fluctuations. This strategy relies on the belief that the price of Bitcoin or other crypto will go up over the long term.

The more you DCA, the more you’ll be emotionally detached from the market and stop panic selling. DCAing is the most effective way to stack crypto and hold for multiple years, maximizing your chances of ending up at a profit — especially if you invest in proven cryptos like Bitcoin.

Traders beat themselves up when they miss out on a bottom and think of the returns they could have made, and the same happens when they don’t buy the local top and the price rises even higher. The only way to battle against that is to have a fixed purchase timeline where you automatically purchase X amount of crypto and keep adding to your portfolio balance.

The fundamental value proposition of your crypto should prevent you from panic selling. While many people were aware of Bitcoin’s potential during the early days when it started gaining traction, almost none of them invested and held for the long term.

Few people who accidentally purchased Bitcoin and lost their wallets managed to achieve those large percentage rises over multiple years by re-gaining access to their wallets. One person searched through a landfill for eight years to find a USB stick with hundreds of millions in Bitcoin value.

If you remember the fundamental value proposition of your crypto and what it can do for users, you will be re-assured that the use case will be the reason people will buy it back up for years to come.

Instead of getting sucked into the downward spiral and noticing the bearish signals, remove yourself from the price action and focus on what is actually important — what your crypto value proposition is.

Cryptos like Bitcoin have first-mover advantage and there is currently an arms race among billionaires and governments to accumulate Bitcoin in large quantities. Cryptos like Ethereum brought smart contracts, ERC-20 tokens, NFTs, and other revolutionary technology that changed the game forever.

If you pick a crypto with strong fundamentals, you have little to worry about long term. However, if you chased green candles and picked a token that you feel deep down won’t make it after the bull run is over — you’re better off cutting your losses.

Price volatility and 50% drops are common in the crypto market. If a person wants to own the highest-performing asset in history, Bitcoin, they must expect pullbacks and drops.

Other cryptos are often affected by the price of Bitcoin due to its large market cap and BTC trading pairs.

While the price may go down temporarily, it is likely to recover. Bitcoin has dipped 85% more than a dozen times in its history. It has recovered every time.

A trader is technically not at a loss until they sell. When the trader sells their crypto for a stablecoin like Tether (USDT), they are out of the game. This means they will not be participating at a rebound and only then are their losses official and have to be reported for capital gains tax.

Warren Buffet’s investing rule #1 is: “Never lose money”. His rule #2 is “Never forget rule #1”. Capital preservation is one of the keys to striking it rich in crypto.

In some cases, panic selling is justified because the crypto might actually go to zero. More than 90% of cryptos that were made have collapsed beyond recovery.

The only way to be sure a crypto will recover after a drop is to pick quality projects with a high market cap. Cryptos that are listed on exchanges like Phemex are a good bet. Think Bitcoin, Ethereum, Cardano, and other cryptos that are in the top 100 by market cap.

There are big differences in cryptos that have multi-billion-dollar market caps with dedicated founders, marketing, and developer teams and cryptos that were made as a joke. The former have a long term vision, while the latter is likely to collapse after an initial run up.

Panic selling is an action that can cost you millions of dollars in future gains. Many traders who held billions of dollars’ worth of Bitcoin at current prices sold their coins for only a few hundred dollars.

As long as the fundamentals of your crypto are strong, it can be useful to practice a degree of emotional detachment. Instead of constantly watching the charts, consider practicing yoga, meditating, hitting the gym, spending time with friends, and traveling.

Getting out of crypto for a while might re-shape your beliefs and give you a fresh perspective of your investments. This could lead to new investment decisions or keep you on track until you are ready to sell for a profit.