What is Asset Correlation: A Powerful Weapon for Portfolio Diversification

As cryptocurrencies gain wider acceptance as an investment product, the topic of portfolio diversification using crypto assets gains importance. Asset correlation is one of the key techniques used by portfolio managers to devise diversification strategies. Knowing when and how to use asset correlation is one of the most valuable skills in the crypto investor’s toolbox. 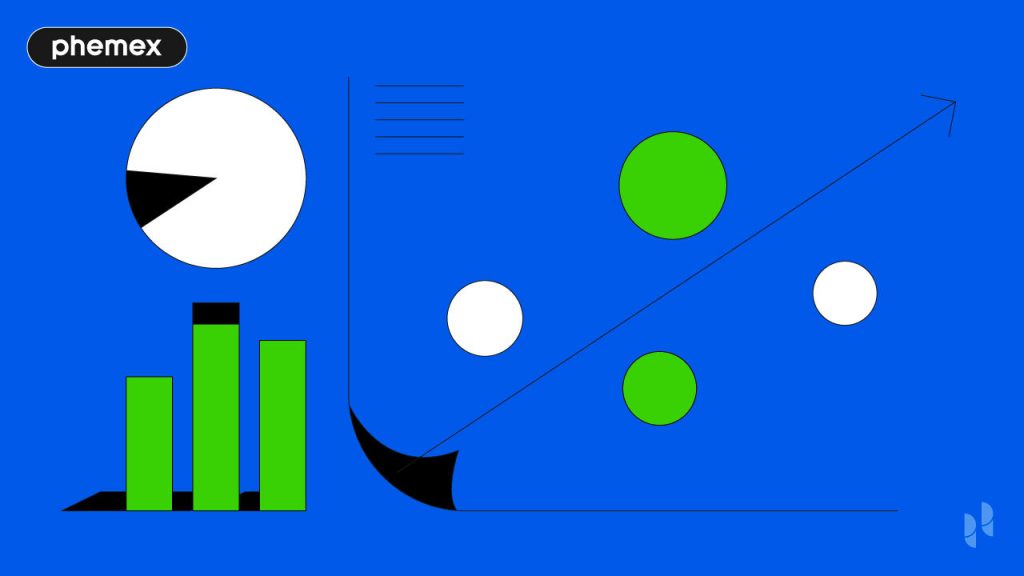 What Is Asset Correlation?

Correlation is a statistical measure used to indicate the direction and strength of a relationship between two sets of numbers. In the context of finance, these two sets of numbers are usually the prices of two assets, such as stocks, commodities, currencies, market indices, or cryptocurrencies.

Correlation Coefficient closer to -1.0 or 1.0

A correlation coefficient of zero, and values close to zero, indicate the absence of any relationship, i.e., the two assets’ prices move in a completely unrelated way.

Correlation, even a very strong one, does not imply a causal relationship between the assets. It simply indicates that the assets vary in a way consistent with each other.

How to Interpret the Correlation Coefficient?

What is a strong/weak Correlation?

Classifying a particular correlation coefficient into various degrees of strength is a subjective exercise. For some analysts, a coefficient of 0.8 is indicative of a very strong correlation. Others may think of it as not nearly enough to classify as “strong.”

The analysis context usually determines what could be regarded as a strong or weak correlation. However, many statisticians use some rules-of-thumb to guide them on this issue. The table below shows the (absolute) values of the correlation coefficient and its corresponding commonly used interpretation.

How Can Asset Correlation Be Used in Portfolio Management?

Analyzing various assets for correlations is one of the most fundamental activities used by many analytically-minded investors and investment portfolio managers. The key goal is to identify the assets with low degrees of correlation, or strong negative correlation, to your current portfolio for potential diversification.

Assets that share little correlation with your current portfolio, or those with strong negative correlation to it, are good candidates if diversification is a goal. By diversifying in this way, you are managing your overall investment risk.

Are There Any Disadvantages to Using Correlation?

While correlation is a very valuable analysis tool, in some cases, it might be deceptive, as it may produce very different coefficients within the same longer-term period, depending on the exact way of measuring.

What is the Correlation between Bitcoin and Ethereum?

For example, let’s consider the correlation between the two most prominent crypto assets, Bitcoin (BTC) and Ethereum (ETH), for the first three quarters of 2021. The overall correlation between BTC and ETH from the 1st of January to the end of September was just 0.28, meaning that these two assets are only weakly correlated.

However, if you look at only the quarter three results (Jul-Sep), the BTC/ETH correlation is a whopping 0.96, a very strong correlation suggesting that these assets move in unison.

To make it even more confusing, the BTC/ETH correlation for quarter two (Apr-Jun) was only 0.24. This quarter was the main culprit for the year-to-EOQ3 correlation being only 0.28.

Below is the table showing the BTC/ETH correlation for the same period of 9 months, measured both over the entire period and for each quarter separately.

The numbers in the table indicate that the world’s two leading crypto assets are not necessarily marching to the same tune. While in 2020, their correlation was a very strong 0.94, 3/4th of 2021 saw a very weak overall correlation of 0.28.

Even the first quarter of the year gave us a correlation of “just” 0.85, noticeably lower than the 2020 result.

However, the same portfolio manager would be scratching their head at the end of Q2 staring at the 0.24 quarterly figure.

If this conversation happened now in mid-October, the portfolio manager who would look at only the overall result of the 9-month period (0.28) would be making completely different conclusions from the one who would analyze the three quarters separately.

As such, beware of the reliance on one point of measurement, and try to measure asset correlations in as detailed a way as possible.

What Is the Correlation Between Cryptocurrency and Other Assets?

The world’s primary crypto asset, Bitcoin (BTC), is often believed to be poorly correlated to traditional assets such as stock market indices or major commodities, while being highly correlated with other cryptocurrencies, particularly the top ones.

Our analysis shows that while the former assumption is correct, the latter is not, and in fact, that has not been the case for the last four years, if ever at all.

Let’s first have a look at the correlations between Bitcoin and some of the popular assets on the market for a period covering the first nine months of 2021.

Correlation between GBTC and Bitcoin

From the assets in the table, Bitcoin had a high correlation (0.89) only with Grayscale GBTC, a leading cryptocurrency index. This is hardly surprising given that Bitcoin itself makes up a large share of the index.

Correlation between gold and Bitcoin

No other popular asset correlated highly with Bitcoin in the first nine months of 2021. Gold had a weak-to-moderate negative correlation with BTC (-0.59) during that period. The other assets had weak to very weak to virtually no correlations with BTC.

Correlation between Stock and Bitcoin

In 2021, Bitcoin had close to zero correlations with the two leading stock market indices, S&P500 and Dow Jones Industrials. It also had extremely weak correlations (-0.12 and -0.15) with the two Nasdaq indices. This data suggests that Bitcoin indeed has virtually no correlation with the stock market and might be a good candidate for diversification away from heavy reliance on stocks.

Correlation Between Bitcoin and Other Assets for the last five years

Are we making the right assumptions by looking at the 2021 results only? Let’s dive a bit deeper and see how BTC correlated with the assets above within the last five years.

Looking at the rows for S&P500 and Dow Jones indicates that Bitcoin correlated highly with the stock market in 2016 and 2017. The two Nasdaq indices also show moderate-to-strong correlations. However, from 2018 onward, Bitcoin’s correlation with the stock market indices has been inconsistent – very low in 2018, relatively weak in 2019, moderately strong in 2020, and then, virtually non-existent in 2021.

This inconsistency suggests that Bitcoin is indeed an asset that is largely uncorrelated with the stock market. However, this is a valid assumption on the basis of the multi-year perspective only. Judging from the numbers, in some years, expect Bitcoin to correlate well with the stock market. The absence of a multi-year trend, combined with the presence of strong correlations in some years does complicate decision-making for portfolio managers.

What Is the Correlation Between Bitcoin and the Other Leading Cryptocurrencies?

Another conclusion from our analysis is that Bitcoin is not correlated to any particularly high degree with the other leading cryptos, including Ethereum, as evident from the table below.

Between 2017 and 2020 inclusive, BTC and ETH shared strong to very strong correlations, with the exception of the year 2019, when it was at 0.75, a coefficient most statisticians would describe only as a reasonably strong, or even a moderate correlation, but nothing more than that.

In 2021, BTC and ETH had only a 0.28 correlation, largely due to being poorly correlated in Q2 of the year. The two leading cryptos’ roller-coaster of correlations continues to date – while the Q3 correlation was back at a very high level of 0.96, the correlation in the first two weeks of October was only 0.73.

These figures suggest that a belief that BTC and ETH are always strongly correlated is clearly misguided.

Another commonly held belief is that BTC and other leading cryptos are also highly correlated. Our analysis shows that this is also not the case, just like in the case with the BTC/ETH correlation. The figures in the table above show that while BTC may be correlated with some leading cryptos in some years, in other years, the correlations are far from strong.

Evaluating asset correlations is a valuable tool for portfolio diversification analysis. However, for the best results, always try to analyze correlations between two assets in as much detail as possible.

Do not rely on looking at only the yearly, or only the quarterly results. Combine these analyses, and more. Look at the correlation coefficients by weeks as well. The more granular the data you have, the better your decision-making will be.

If you are into carrying out your own in-depth correlation analysis, the good news is that it is pretty straightforward using a commonly used spreadsheet software. Both Excel and Google Sheets have the CORREL() function you can use for correlation analysis.