How to use The Trend Reversal Trading Strategy: All you Need to know

In trading, a reversal refers to the change in the direction of an asset’s price. The trend reversal trading strategy is used by both day traders and long-term investors to determine when to enter or exit a market. Traders trade reversals by analyzing price actions using trendlines and trading channels. They use technical indicators, such as moving average (MA) and moving average convergence divergence (MACD) to help them isolate and spot reversals. 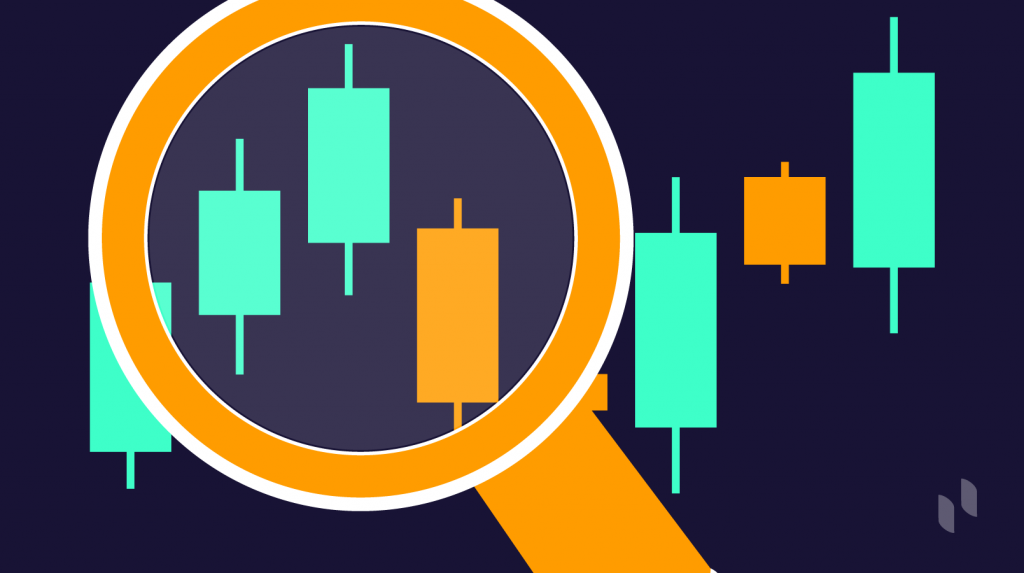 What Is a Trend Reversal?

In a financial market, a trend is the general direction of the market or an asset’s price. Trends occur in all markets and can be universally traded in stocks, futures, cryptocurrencies, and beyond. Traders identify trends through price action and technical indicators. They use trendlines to determine the direction of the trend and utilize indicators to judge the strength of the trend. There are three types of trends:

When does a trend reversal happen?

How to Identify a Trend Reversal Based on Price Action?

Some investors identify trends and reversals based on price action alone. Specifically, such traders use technical analysis tools, like trendlines and trading channels calculated from an asset’s price.

Trendlines are lines drawn over consecutive highs or lows to show the overall direction of an asset’s price. They represent a trend’s support and resistance in any time span. To create a trendline, traders link together at least two points on an asset’s price chart. In an uptrend, a trendline acts as a support and connects the higher lows. In a downtrend, a trendline act as the resistance line and connects the lower highs. The time frame on the price chart is configurable. For day trading, some traders use one-minute or five-minute charts. Long-term investors may opt to use longer time frames in the hourly, daily, or weekly charts.

In the example below, the trendline connects the series of higher lows, indicating a bullish uptrend. The green bullish trendline continues upward until a point (designated by a blue arrow) where the trend starts to break and dips below the trendline. The trend then reverses, and the price falls in a downtrend. 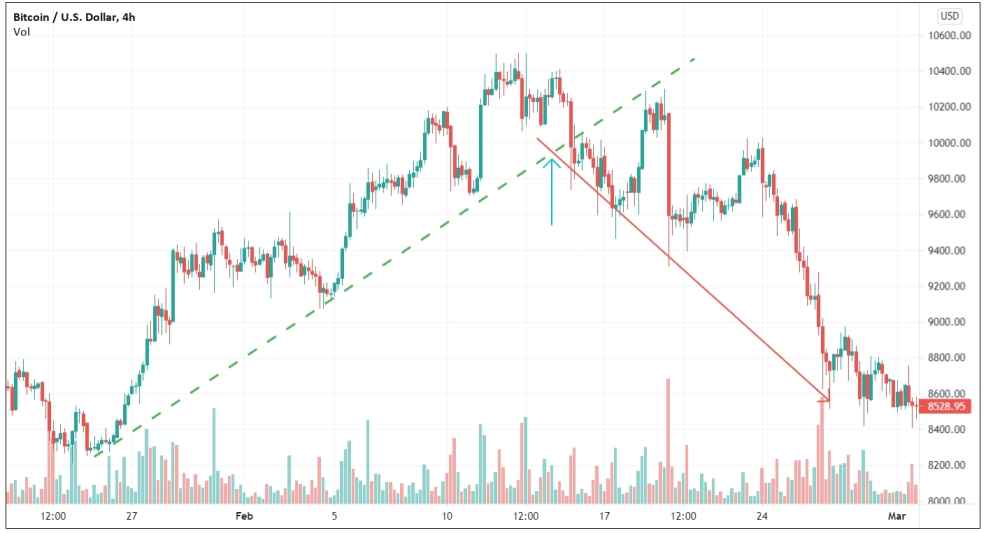 The longer a trendline, the more valid it is. A long trendline means there is a higher possibility that the lows will turn upward when their troughs reach the line. However, a longer trendline may also mean that it is too late to enter the market, since there is a high chance that the trend will change its course. Also, a break in the trendline does not necessarily mean a reversal is coming — it may be a false break. For that reason, it is important to analyze the trendline break’s magnitude and the market context before entering or exiting a market.

There are three types of trading channels:

The example below shows a descending channel within the two blue lines. To identify a trend reversal here, a trader would analyze the price chart to determine where the price breaches below the channel line. In the figure, the price action bounces between the lines in an almost oscillating way before the asset’s price overshoots the bottom line at the red arrow. An overshoot signifies a trend reversal where the initial bearish downward trend turns into a bullish upward trend. 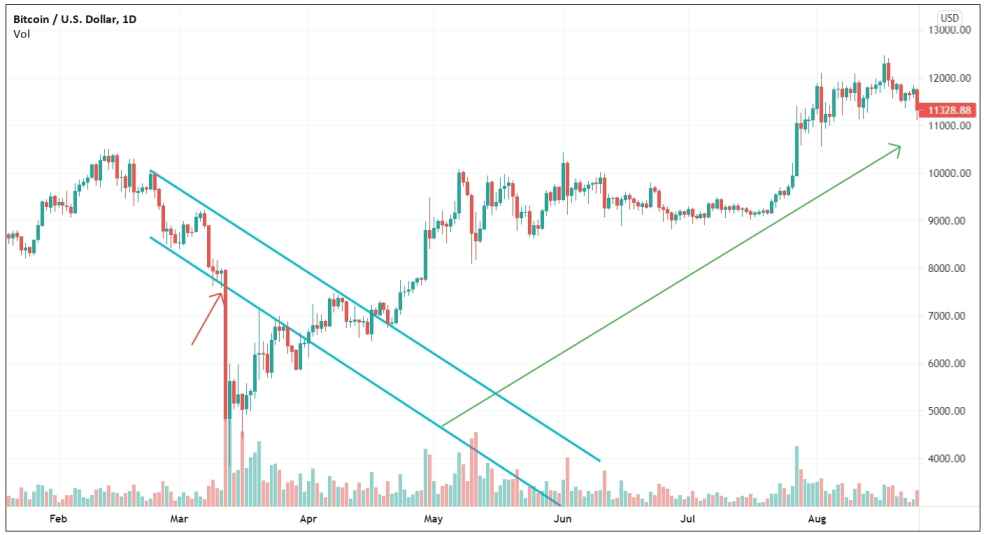 A moving average (MA) calculates an asset’s average price across a set period of time. It is a simple tool that traders use to smooth out short-term price fluctuations and determine the general direction of a trend. For example, a 5-day moving average simply means the five-day sum of the asset’s prices divided by five. The longer the time frame, the greater the lag between the actual price action and the indicator. Short moving averages are sensitive to change, while longer moving averages require a larger price movement to change their movements. Traders can freely configure the time frames for moving averages and customize them according to their trading strategy. 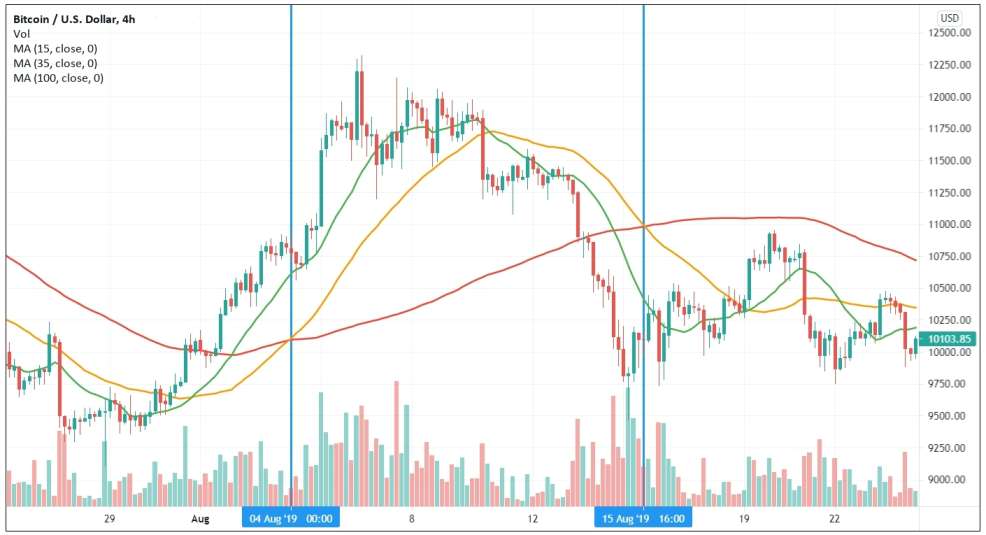 Divergence happens when the price chart shows higher highs or lower lows, and the indicator signal makes lower highs and higher lows, respectively. The example below shows a divergence where the price makes lower lows while the MACD indicator produces higher lows. After the divergence, the initial bearish downtrend reverses as the asset’s price moves in an upward bullish trend. 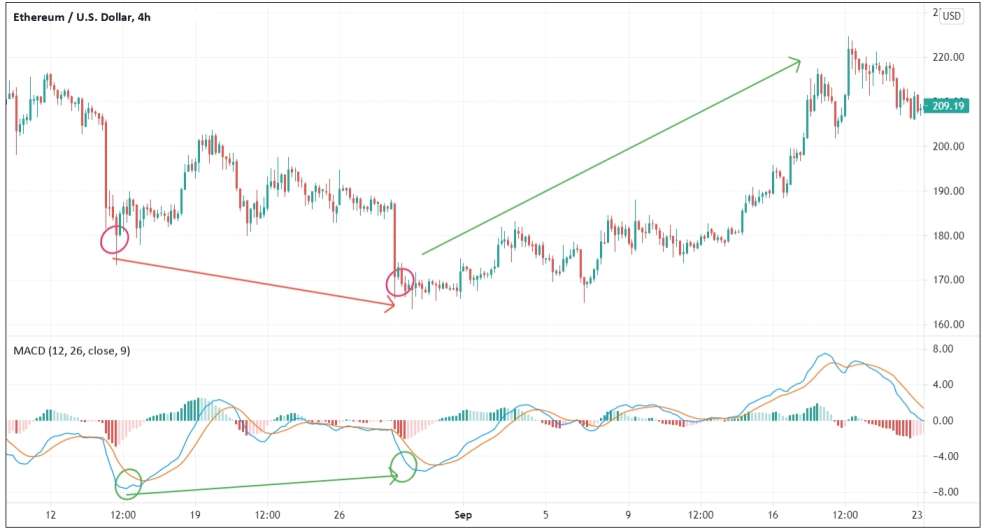 Learning to identify trend reversals can help you make better investment decisions, but no single analysis tool can determine a trend reversal with 100% accuracy. Successful traders combine the methods discussed above, along with other specialized tools, to offset the weaknesses of each one and create a more sophisticated approach.

Like all trading strategies, using price action and technical indicators to identify trend reversals involves a certain degree of risk. Remember that not every signal will result in a reversal, and some trends will resume rather than break. Before jumping into real-world trading with strategies like this, it is important for novice traders to practice in a simulator.