How to Use the MACD Indicator?

Crypto markets with Bitcoin specifically, have been known as incredible markets for trend following strategies. In this article, we are going to be talking about an extremely popular trend following tool, the Moving Average Convergence Divergence, otherwise referred to as the MACD Indicator.

What is the MACD?

In its default form, the MACD indicator is a trend and momentum indicator that plots the relationship between the 12 period EMA and the 26 period EMA, and then applies a 9 period EMA to this value. Convergence and Divergence refers to when the 12 and 26 EMAs are moving closer together or further apart. The Signal line, or 9 period moving average of this value, gives us buy or sell signals depending on whether it is crossing above or below the MACD.

Use MACD to spot Buy or Sell Signals

In the image below, we have a Bitcoin chart with a 12 period EMA plotted in red, and a 26 period EMA plotted in black. At the bottom of the chart you can see the MACD indicator. The blue line is the MACD line, which is the 26 EMA minus the 12 EMA. This value is then plotted to give us a representation of how far the moving averages are spaced apart. The idea being that a trend that is picking up in momentum will result in the moving averages diverging from each other, and the opposite for a trend that is losing steam. The Golden line is the signal line, which gives us an idea of what the trend has been for the MACD values. 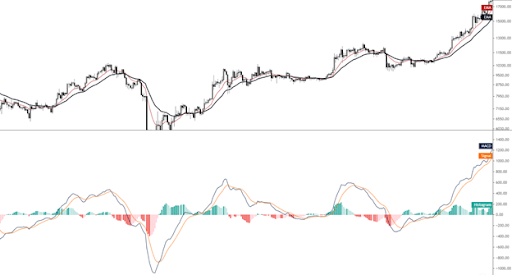 How to use the MACD Indicator in Crypto Trading?

There are a few different ways to look at the MACD Indicator. For one thing, the MACD will spend much of its time favoring the values above the 0-line during bullish market environments and below during bearish market environments. This is like the concept of the 50 line for the RSI. So, at first glance, the MACD can be used to get a higher up view as to what the general market direction is.

The other way we can use the MACD is as a simple trend-following tool to identify good entries and exits for higher timeframe trends. The reason I say higher timeframe is because we normally see more false signals on the lower timeframe as the result of choppier behavior. This is also why the MACD is not as effective in ranging environments. If we are looking at the daily crypto chart and see that after putting in some type of bottoming structure, that price is now moving upward and the signal line has crossed from under the MACD line to above, and both are trading above the 0-line, then this may be a good signal to long that asset.

On the other hand, if price has been in a sustained uptrend, has formed some type of topping pattern, and now the Signal line is consistently maintaining position below the MACD line; it may be time to sell the position or consider shorting the market. The simple crossover with substantiating evidence of a topping pattern, are more often than not, good to act on alone (without crossing the 0-line), because market reversals to the downside happen rather quickly and do not often allow for smoother entry.

MACD v.s. RSI: Which is Better?

In the example below, we can see that although price made a higher high, the MACD indicator made a lower high. This is a sign (though not enough to act on alone) that buyers in this case may be losing momentum. Many crypto traders use this with other strong evidence to make a case for either taking profit, opening a positioning in the opposite direction, or if anything just to keep a closer eye on the trend. 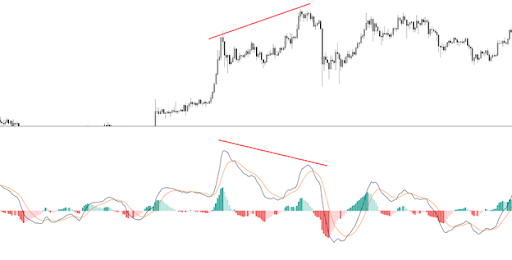 Is MACD a Good Indicator?

The truth is, the MACD is just like any other technical indicator based on price. It is a lagging indicator that gives us a smoothed-out representation of the current trend and momentum. If acted on alone, its frequent false signals may lead to many incorrect actions. However, when combined with other crypto analysis and indicators, it can be a very valuable tool to use. The most common method of using this tool actually involves partnering it with the RSI, or the Relative Strength Index. Experiment and see what type of feedback you get, and remember, all tools can work with the proper application. 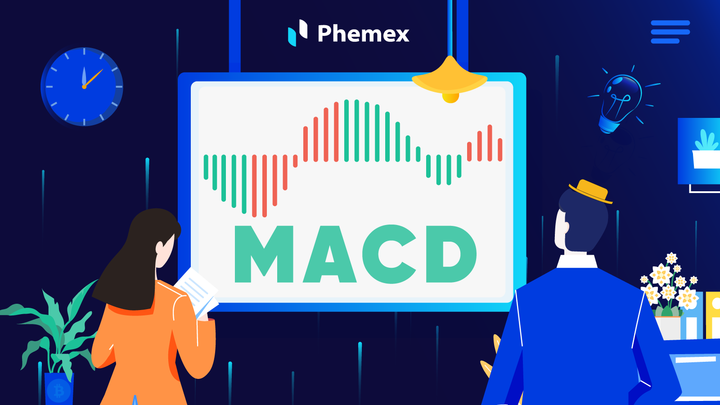