What Is Trend Trading: Following the Market When It Pays

Trend trading is a trading style that attempts to capture gains through the analysis of an asset’s momentum in a particular direction. What Is a Trend in Financial Markets?

In financial markets, a trend is a direction of an asset’s price that has an either upward or downward movement pattern over a period of time. Trends can be short-term, lasting a few days, medium-term, or long-term, lasting many months or years.

There is no specifically defined minimum number of data points (e.g. daily closing prices) that is required to classify a pattern as a trend. In theory, just two data points are enough to draw a line between them and claim a trend.

However, two data points may not give enough minimum information to identify a real emerging trend. That is because the movement of the second data point, in our example upwards, may simply be a random out-of-pattern move that will be reversed on the third data point.

Thus, we could define a period of three days, represented by closing, opening, daily high, daily low, or some other uniformly applied daily price, as the minimum required to establish a trend. In reality, many analysts tend to wait for at least a few days to confidently claim a trend pattern.

Trends can last for many months, or even years. However, most trend traders are less interested in very long-term multi-year trends, and prefer to trade on trends lasting up to a few months at most.

What Is Trend Trading?

Trend trading, or trend following, is a style of trading on financial markets based on identifying and taking advantage of upward or downward trends.

When a trader identifies an upward trend, also called an uptrend, they long the asset in anticipation of it gaining value in the future. Conversely, when a downward trend (or a downtrend) is identified, a trader shorts the asset, expecting it to keep losing value.

Trend trading is one of the three most common trading approaches, along with swing trading and day trading.

What Are the Differences Between Trend Trading, Swing Trading, and Day Trading?

Out of the three trading styles, trend trading, on average, takes the longest-term view of the market. This does not mean that a trend trader cannot capitalize on short-term market developments. If there is a trend, even one lasting a few days, there is an opportunity for a savvy trend trader to profit.

What Are the Common Methods Used in Trend Trading?

The key goals in trend trading are to identify early emerging trends and to predict whether an existing trend is likely to continue. Trend traders may use a large variety of analytic methods to guide their strategy. Among this variety, there are some very common, tested-by-time methods that any serious trend trader should have in their arsenal.

Some of the most common and important trend trading methods include:

The Simple Moving Average (SMA) is calculated by averaging prices of an asset over a certain number of data points, e.g., daily closing prices. The computed values for the SMA are added to the chart as a separate line in addition to the asset’s price line. The table below shows a simplified example of how the SMA for a 5-day period is derived.

Since we used a 5-day SMA and, thus, needed at least five data points, there are no SMA values for the first four trading days. Below is the plot showing both the prices and SMA values for days five to eight from our example. 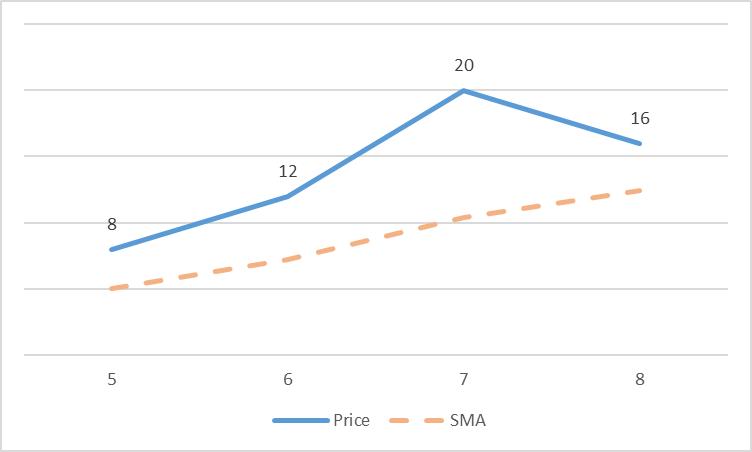 Typical time periods used for calculating the SMA for shorter-term trend trading are five days, as in our example above, 10 days, 20 days, and 30 days. For long-term trend analysis, SMAs based on 50 days, 100 days, and even 200 days are employed.

SMA values typically show a more “smoothed out” line compared to the price line. A key function of the SMA is to help separate random out-of-trend movements in the price line from indicators of the trend breaking or continuing.

Naturally, the reverse interpretation is applied when analyzing downtrends i.e., when a price line of a declining asset rises above the SMA line and stays there for a few data points, it could signal an end to the downtrend.

The exponential moving average (EMA) is one of the common modifications to the SMA. Unlike the SMA, which treats all the data points used for calculating the average equally, the EMA gives a higher weight in the calculation to more recent data points. The actual weighting given to the earlier and later data points may differ widely depending on the analyst’s choice.

The key idea behind the EMA is that it reacts to more recent price changes faster than the SMA, which could help spot and react to trend changes more proactively.

The moving average convergence-divergence (MACD) is another popular measure used by trend traders. There are two lines plotted using this technique. The first line, showing the MACD, is calculated by subtracting the asset’s 26-period EMA from its 12-period EMA. The second line, called the signal line, is calculated by deriving the 9-period EMA of the MACD.

MACD is a useful method to assess the strength of a trend. It can also be used as a momentum measure to spot emerging trends.

While MACD may be used as a momentum gauge, a preferred measure to identify emerging trends is the relative strength index (RSI).

RSI is an analysis method used to identify assets that may have been oversold or overbought over a recent period of time, e.g. the last two weeks or 30 days. RSI’s calculation produces a value between 0 and 100.

As a rule of thumb, a value of 70 or above indicates an asset that has been overbought, while an RSI of 30 or lower is an indicator of an oversold asset. An overbought asset is due for a downward price correction, and conversely, an oversold asset is expected to start appreciating.

While RSI is more commonly used by swing traders, it is a valuable method for trend traders as well. Despite being very good at general trend analysis, the SMA, EMA, and MACD are less applicable than the RSI to early spotting of emerging trends.

The trend trading methods described above are all from the domain of technical analysis. However, the best trend traders never neglect carrying out regular fundamental analysis of the market and the assets of interest.

Major economic and political news, corporate announcements, asset-specific news and publications, industry commentary, and other sources of non-technical information can help supplement and enhance technical analysis for a trend trader. Many new market trends or trend reversals emerge as a direct reaction to these news and announcements.

Trend trading is a common trading style based on identifying and taking advantage of uptrends and downtrends in financial markets. It may have a short-, medium-, or even long-term focus.

Fundamental analysis has higher relevance to and importance for trend trading compared to the other common trading styles, swing trading and day trading. Many new market trends start as a result of major news and announcements that are best identified through careful fundamental analysis.