Bitcoin Support & Resistance: Learn How to Trade with Them

Support and resistance are two of the most important concepts to grasp in crypto trading, as they’re indicators of where a trend may change direction. Therefore, crypto traders use trendlines to follow lines of support or resistance to predict an appropriate entry or exit point for their trade. Analysts often refer to support, resistance, and trends when discussing price movements, so even non-traders should understand the significance of these terms.

Here, we’ll take a deep dive into support and resistance and how to recognize these concepts when you’re trading. We’ll also look at trendlines and how you can apply them. What is Bitcoin Support and Resistance?

We’ll use Bitcoin as an example here, but the same principles apply to any cryptocurrency, and indeed, other assets.

As BTC prices move up and down, they form evident bullish or bearish trends on a short-term or long-term basis.

What is Bitcoin Support?

When prices move down, it’s because there are more sellers than buyers. The forces of supply and demand are skewed towards the supply side.

However, as the price becomes increasingly lower, BTC will eventually reach a level where buyers will become interested again, tipping the balance back towards the demand side. The point at which demand starts to kick in is known as the support level.

For example, March 2020’s“Black Thursday” saw a massive sell-off of cryptocurrencies due to fears surrounding the global coronavirus pandemic. BTC dropped 40% in a single day. However, as you can see, it reached a low, or found support, just above $4,000. 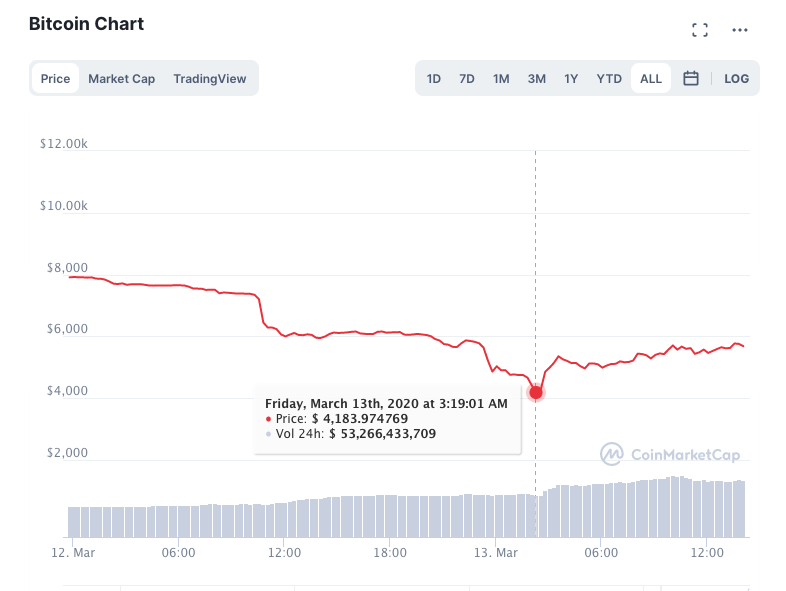 What is Bitcoin Resistance?

Resistance is the same principle in reverse. As bullish sentiments take over the market, demand outstrips supply, and prices get pushed up. However, as BTC hits higher highs, people become more reluctant to buy at higher prices. Once demand starts to drop, the price hits a resistance level.

We’ve seen this scenario play out several times over the first months of 2021 as BTC has continually tested new overhead resistance levels. The $57,000-58,000 level proved to be a tough barrier to breach.

In late February, BTC reached a new all-time high above $57,700, which proved to be a critical resistance level as bearish sentiments then took over for the next week. After a period of trading sideways, the bulls found new momentum and pushed prices back up, but by March 11, prices had once again hit the same resistance, around $57,700. In the end, the bullish pressure won, and BTC went on to achieve a new high above $62,000. The Significance of Round Numbers in Bitcoin Support & Resistance

This proved to be a critical resistance point, as prices crashed afterward, and BTC didn’t recover its all-time high until almost exactly three years later.

However, once BTC broke through $20,000 again, it found further momentum to keep achieving new highs up to $40,000 in mid-January. By mid-March, $60,000 proved to be the new critical resistance level when prices couldn’t sustain above the new ATH. What are Trendlines in Bitcoin?

A trend occurs when a price is moving more or less continuously in the same direction. If the trend is bearish, you may see some green candles on a chart, but overall, prices are trending downwards in such a way that you could draw a line joining increasingly lower levels of resistance.

Conversely, in a bullish market, a trendline will join increasingly higher support levels.

How to Trade Bitcoin Using Support, Resistance, and Trendlines

To apply these concepts in trading, you’ll need to become familiar with drawing trendlines using charting tools. Unfortunately, there are no hard and fast rules for drawing trendlines, but some guidelines can help.

Firstly, you need to decide which price points you will use to map your trendline on a chart. As BTC is a volatile asset, there can be some significant variances between the open price and the session high and the closing price and the session low. What’s most important is that you try to be as consistent as possible when drawing your trendline and attempt to join the same price points throughout the line.

Another critical guideline worth following is to draw bullish trendlines below the candle, so track the closing price or the session low. Similarly, for drawing a bearish trendline, follow the opening price or session high. If you’re using trendlines to decide when to enter or exit a trade, then the price crossing the trendline is your decision point.

For instance, let’s say you’ve opened a long position based on the trendline below. You’ll want to take profit at the point where the bearish candles start to cross over the line at the top end. 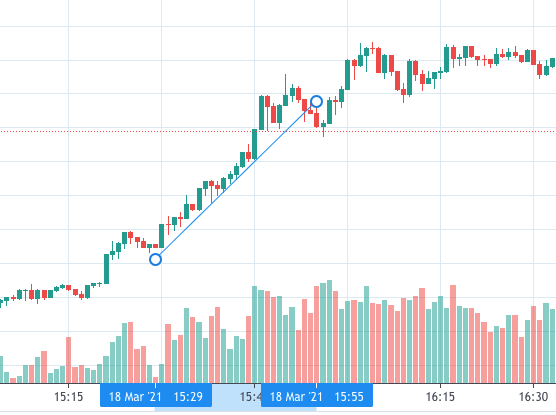 Finally, avoid trying to draw lines where they don’t exist. If your trendline is crossing through candles, or too many candles simply don’t touch the trendline, then the chances are that trendlines aren’t the right tool for this scenario. However, there are many other tools you can use in this case, such as moving averages, a Fibonacci retracement, the MACD Indicator, or the relative strength index.

Understanding support, resistance, and trendlines are some of the most fundamental pieces of knowledge – not just for traders but even for casual investors following an asset’s price. They’ll help you better understand articles about price analysis, as well as give you a fundamental understanding of how to calculate when to take a profit as a short-term crypto trader or a long-term HODLer.