Bollinger Bands Explained: How to Use The Most Popular Indicator?

One of the most popular indicators used across all markets are Bollinger band (BB) indicators, which were developed by John Bollinger, a well-known trader in traditional markets.

The Bollinger band consists of three lines, one of which most traders are already quite familiar with — the20-period simple moving average (SMA). The exterior lines that envelope this indicator are the standard deviation bands, which by default represent two standard deviations above and below the 20 period SMA. 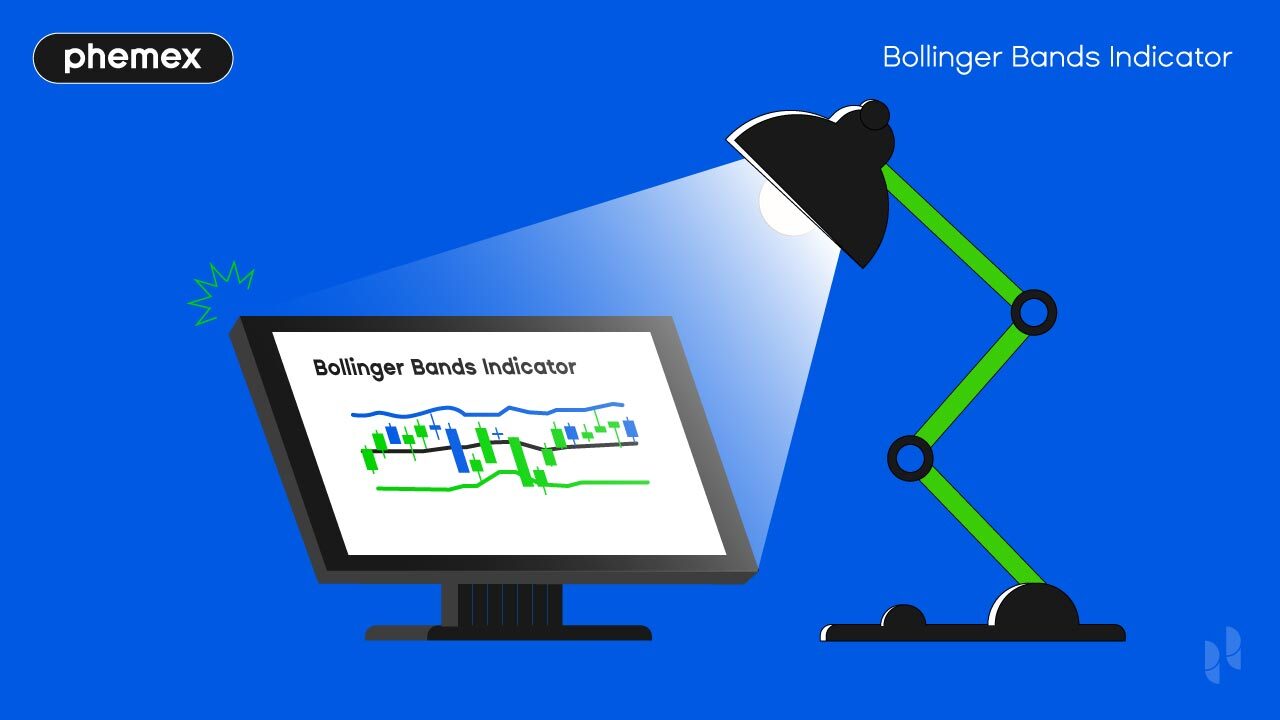 What Are Bollinger Bands?

Bollinger bands may seem quite complex, in essence, they are trading tools used for the technical analysis of investment assets. They are utilized by traders to make an informed prediction on what the price might do next — something which can help determine their trade. Bollinger bands focus on the standard deviation of an asset’s value, as well as its moving average value.

The Bollinger band formula is as follows:

Bollinger bands work best when the middle band, or SMA, reflects the intermediate term trend, as in this way the asset’s trend is combined with the asset’s relative price information.

What Is The Bollinger Bands Formula?

The very core and central component of a Bollinger band is the simple moving average (SMA).

This moving line is a calculation of the average trading price of an asset over a period of time — usually 20 periods. This means that the closing price of the asset is taken over the last 20 periods (this can be days, hours, minutes, or others, depending on the trading period being looked at) and then divided by the total number of periods — in this case 20. 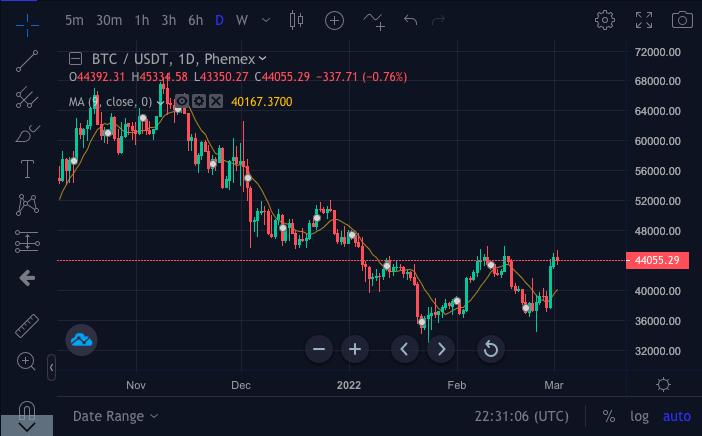 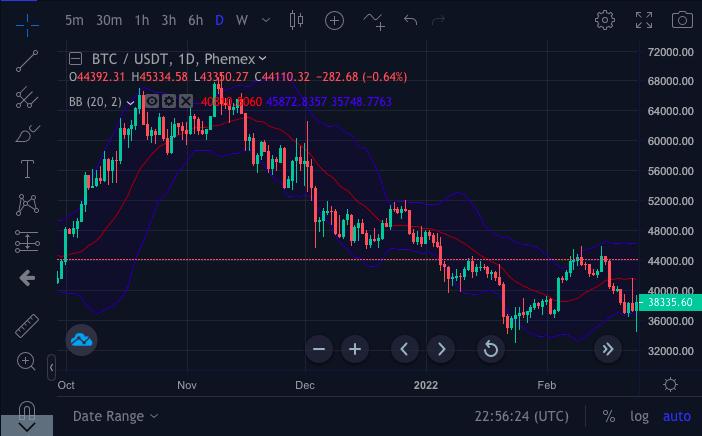 When focusing on the candle chart in this Phemex BTC/USD graph with Bollinger bands (BB), it can be seen that 95% of the price range (shown by candles) sits within the two Bollinger bands standard deviation.

In its default form, Bollinger bands standard deviation are set to 2 SD, but a trader can increase or decrease this by setting them to capture more or less of the target values. Traders can also change the moving average settings if they wish to, although the standard is to set it to 20 periods.

How Do Bollinger Bands Work?

This is why Bollinger bands are some of the most popular trading indicators — not only are they simple to read, but they are essentially two indicators in one.

Although Bollinger bands are used in many trading systems, traders most commonly use them to spot mean reversion opportunities and changes in volatility.

1 Use the Bollinger Bands to spot mean reversion trading

In ranging conditions, the price is accepted within a range of values, which can lead to great risk-to-reward opportunities as there is a bigger range between the highs and the lows. When the price approaches an extreme of what these normal values are, as long as the trader operates under the assumption that the range is to continue and the conditions are to persist in the same way as they have been, there is good opportunity for profit.

There are plenty of strategies that traders can experiment with using this method:

(A)-One might be to look for three drives into the highs or lows to look for trading opportunities back to the mean.

(B)-Another might be to play the successful crosses and retests of the mean with the intention of taking a move back to an extreme.

One other popular use for Bollinger bands is to spot changes in volatility. Specifically, the type of compression that occurs before breakouts or continuation. In markets, compression usually leads to expansion and then back to compression again — a pattern that if a trader knows how to exploit can lead to great returns. One thing that we can look for to potentially time or spot periods that precede breakouts, are areas where the Bollinger bands begin to compress or bottleneck.

3 What is Bollinger Squeeze

Often, when a market is trending, the Bollinger Bands will remain expanded, and the consolidations that occur during the trends will lead back to compressions. Spotting the bottlenecking can allow a trader to position themselves properly in the tightest area, offering a superior location to define risk and place a stop. This can be especially useful for breakout traders. Identifying this behavior can also allow a trader to prepare themselves for a volatility squeeze if they are already in a position. 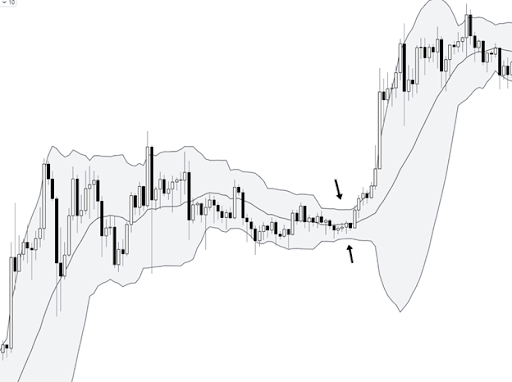 An example of a bullish breakout following a bottleneck in a Bollinger band.

In addition to standard BB indicators, there are also other types of Bollinger bands: 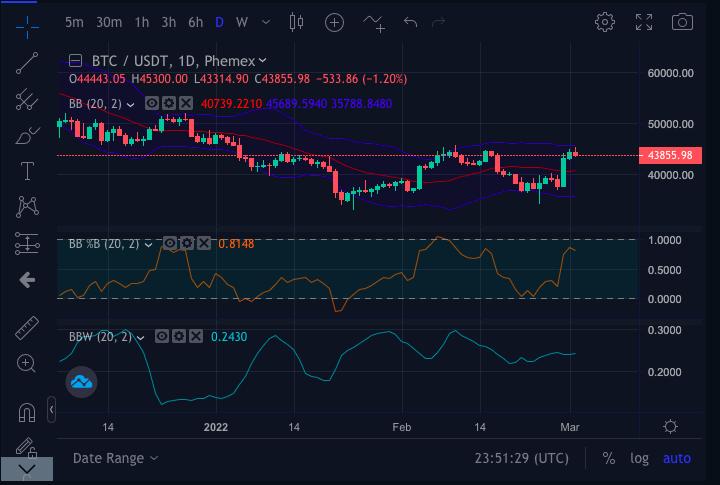 The best thing to do with any of these indicators, as with all indicators, is to experiment with them. Try them across both the lower and the higher timeframes, with both default and modified settings. This can be helpful to beginners, as generally speaking, the higher the timeframe you are in, the stronger the signals tend to be. Bollinger band charts are free on Phemex, meaning that novice traders can easily learn how to trade Bollinger bands. Read on to find out how.

How to use the Bollinger Bands (BB) Indicator on Phemex?

The Bollinger band indicator is a free indicator available to all Phemex users under all trade pairs. To use the BB indicator on Phemex, open your favorite trading pair. For this demonstration, we’ll use the most traded BTC/USDT pair. At the time of writing, BTC is trading at around $44,000 USD: 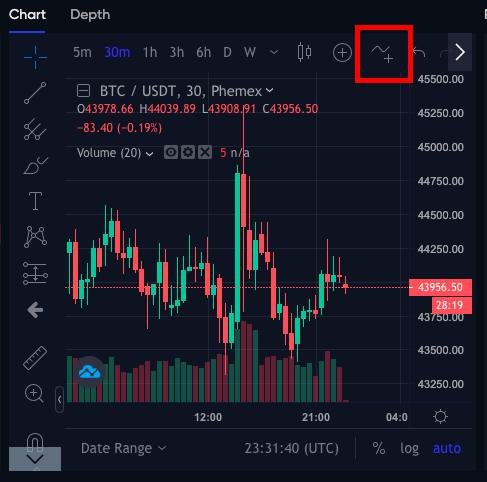 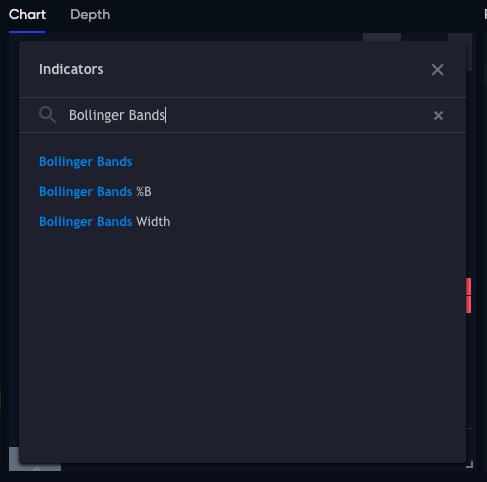 Bollinger bands are an excellent trading tool that should be understood and used by any trader — whether novice or pro. BB indicators can be used to understand which way the market is going, analyze volatility, and predict breakouts. However, as with all indicators, traders should not solely rely on one indicator, or even all three types of Bollinger band, to make their analysis. Traders should do their own research and use the multiple free tools at their disposal on platforms such as Phemex to ensure they are in a suitable position before making a trade. Additionally, traders can use stop orders to minimize risk and losses.