All great inventions and products start with visionaries, risk-takers, engineers, technicians, programmers, and great businessmen. However, once the products come to market, hit the mainstream, and catch the public’s attention, the celebrities and public figures get involved. This is for two reasons, their marketability, and their commentary.

Because of their fame, celebrities are the first people approached by companies to serve as the faces of popular products and brands. For example, we see celebrities’ faces on things like beauty accessories, fragrances, clothing and lingerie, cars, luxury watches, and footwear. This is a marketing strategy employed by many companies to enhance their brand awareness and to make more sales. Elon Musk in particular has become one of the most influential figures in the world of Bitcoin, cryptocurrencies, and Dogecoin. However, this is not only because of his celebrity status but rather because he is a billionaire genius inventor and engineer, as well as a first-mover in the payments and banking industry (through his involvement in Paypal). Therefore, his opinions that he frequently shares on Twitter carry significant weight and meaning and definitely impact the markets (for good or for worse).

Elon Musk’s cryptocurrency influence comes largely from his tweets about Bitcoin, Dogecoin, Tesla, and Proof-of-Work mining. However, because Elon’s position and attitude towards crypto fluctuates and is not always consistent, the price movements in response to his tweets are often extremely volatile. 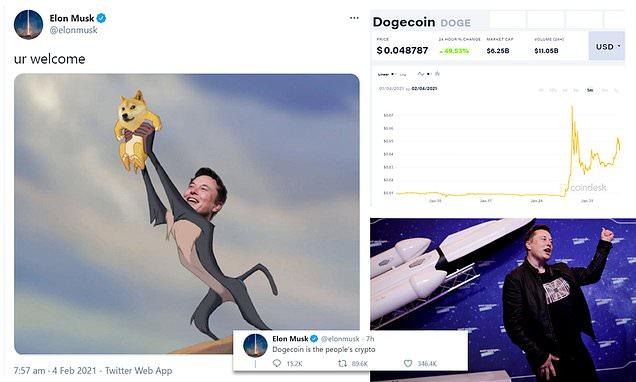 For example, as the picture above suggests, when he tweets something positive about Bitcoin, Dogecoin, or when he simply posts a picture of his new dog (shown below), the market reacts in the green. Interestingly, these announcements also mimic the characteristics of a traditional pump-and-dump scheme. This is what makes Elon so hard to read, predict, and ultimately what makes him potentially dangerous to beginning investors and actual crypto believers. What does Elon Musk think of Cryptocurrency?

Elon Musk is not only a cryptocurrency tweeter, he has gone on record saying he invests in cryptocurrencies, specifically, Bitcoin, Ethereum, and Dogecoin. But this doesn’t mean he is a day trader or panic sells when the market turns red. In fact, he has made multiple statements saying he is a long-term believer and HODLer, and that he has no plans to sell his holdings.

With regards to the percentage of his holdings, Bitcoin leads his portfolio, followed by Ethereum and Dogecoin (in no particular order). The reasons why he likes Bitcoin are already known and in the public, but what’s more interesting is his fascination with Dogecoin. Elon’s personality that he portrays on Twitter seems to be fun, humorous, unserious, joking, and often sarcastic, which in a way explains his interest in a meme coin like DOGE.

Beyond his personal opinions and holdings, in February 2021, Elon Musk first made the announcement that Tesla had purchased $1.5 billion dollars of Bitcoin. Shortly after, he said he was going to allow prospective Tesla vehicle buyers purchase their Teslas using Bitcoin, and that this Bitcoin would be held on Tesla’s balance sheet and would not be converted to dollars. However, a few months later Elon once again took to Twitter saying this offer was off due to his concerns about Bitcoin mining’s impact on the environment. 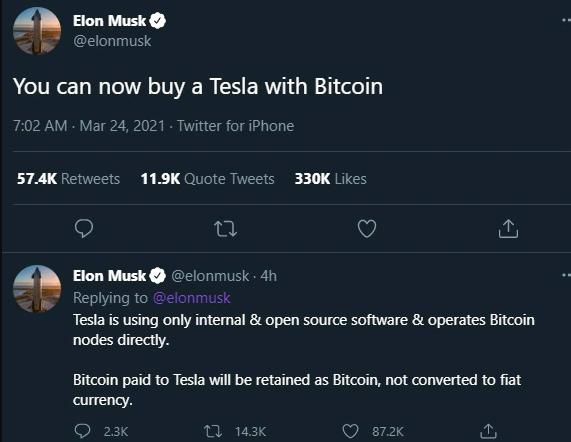 How did Elon Musk affect bitcoin?

It is evident that Elon Musk tweets a lot about Bitcoin and often joins the greater crypto conversation on Twitter. However, his announcements have also had a visible impact on the markets. Below is Bitcoin’s price chart in relation to Elon’s Bitcoin tweets. Earlier this summer when the market crashed from April and May highs, Elon was very active and involved in the macro factors contributing to that crash, with his tweets causing the market to correct multiple times. In general, Elon Musk holds a positive view towards cryptocurrencies and what they offer to the world of banking and finance. Moreover, he clearly believes that cryptocurrency, in particular Bitcoin, should be used as a medium of exchange to purchase real goods, hence, his decision to explore using Bitcoin to buy Tesla vehicles. Lastly, because he has put his own money into the industry and because his companies hold Bitcoin, it clearly shows he is a serious investor and that he has a long-term outlook on Bitcoin.

As the crypto industry becomes more and more popular and as its total global market cap grows further beyond the $2 trillion dollar mark, an increasing number of celebrities will keep piling into the industry. But Elon Musk is still the most prominent public figure and is definitely the most influential in terms of his ability to bring a general level of competence to the discussion (from the celebrity crowd). However, although some of his sarcastic or one-sentence tweets have caused the market to pump green by multiple percentage points, the vast majority of his statements have led to market dumps. Nonetheless, he has certainly brought up many valid discussion points and contentious areas in the crypto conversation. Hopefully, moving forward his thoughts can lead to more advancements in the industry, making it more stable and respected.

← What Is Saber: A Decentralized Stablecoin Exchange on Solana
Money Lego: DeFi’s Building Blocks →
About