What is Bitcoin Halving?

The halving is a programmed event in Bitcoin where the protocol automatically updates to cut the block reward for mining and hence the rate at which new bitcoins are created in half.

When Bitcoin was conceived in 2009, its creator going under the pseudonym Satoshi Nakamoto was faced with the challenge of designing a fair method for the creation and distribution of newly minted bitcoins. The mechanism he envisioned is commonly known as Bitcoin mining, and it’s designed to simulate the mining of precious metals such as silver or gold.

To fully grasp the concept of halving, we first need to briefly look at how the mining mechanism works and how bitcoins are created and distributed within the Bitcoin ecosystem. 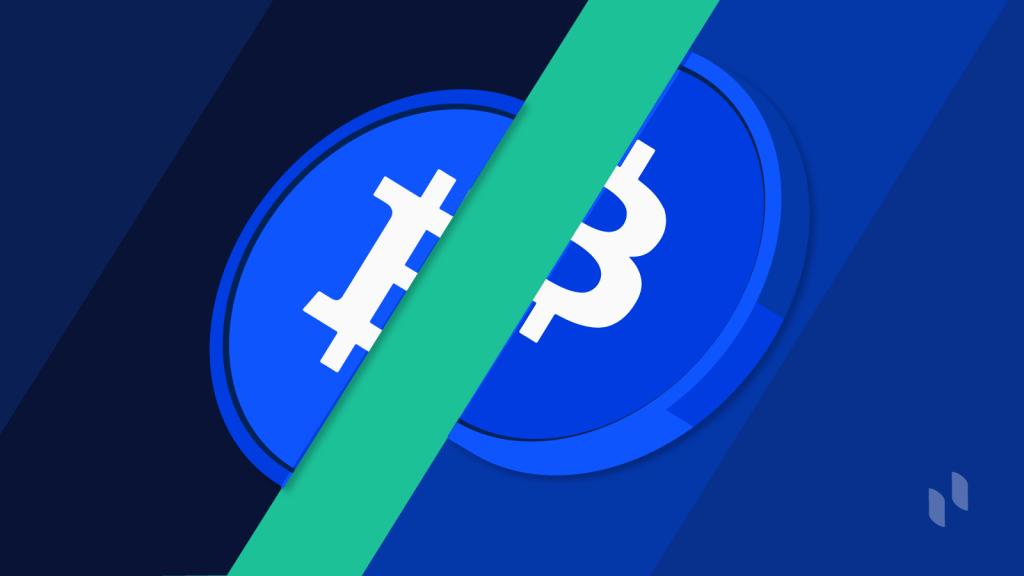 What is Bitcoin Mining?

As many already know, instead of relying on a single central authority to verify and settle transactions, Bitcoin does this in a decentralized manner by distributing this task amongst a special type of network participants called miners.

Bitcoin miners are network participants who run specialized computing hardware to compete in a mathematical challenge based on a one-way cryptographic hash function. Solving this challenge entails expending vast amounts of computing power and electrical energy in order to find a suitable nonce. Strictly speaking, a nonce is just an arbitrary number that meets the protocol’s difficulty target. However, for the intents and purposes of mining, the nonce serves as “proof of work” or a piece of data that is difficult (costly, time-consuming) to create but easy for others to verify and which meets specific requirements.

Is Proof of Work Different Than Proof of Stake? Learn now on PoW vs. PoS

Without getting too technical, the idea behind this mining mechanism is to create an incentive structure that enables the network to achieve network-wide consensus regarding the ledger’s true state in a decentralized and robust manner. Through mining, the Bitcoin network simultaneously accomplishes two things: one, it creates and introduces new bitcoins into the Bitcoin money supply; and two, it verifies and settles peer-to-peer transactions in a decentralized manner.

Leaving out the more complex game theory behind it, it suffices to say that mining’s core incentive structure is based on the old “carrot and stick” model. Miners who follow the protocol rules and validate transactions in an honest manner get rewarded with newly minted bitcoins, while dishonest miners who try to cheat the system end up with nothing but wasted time and massive electricity bills to pay.

What are Bitcoin Blocks?

Blocks are files that contain some if not all of the most recent Bitcoin transactions that have not yet entered any prior blocks. Bitcoin blocks have a maximum size of 2 megabytes and contain roughly 2000 transactions each.

When someone makes a bitcoin transaction, that transaction is immediately broadcasted on the Bitcoin network, where other nodes validate and propagate the transaction until it reaches everyone in the system.

From a single node’s point of view, when it receives and validates a new transaction, it places it in the Mempool, which can be thought of as storage space for unconfirmed transactions. From there on, the unconfirmed transactions sit idle in the Mempool until a mining node picks them up, packs roughly 2000 of them into a single file called a block, and starts computing to find the solution to the mathematical challenge we mentioned earlier.

As soon as a miner finds a nonce that meets the protocol’s difficulty target, they immediately broadcast that block along with the proof of work (the correct nonce) on the Bitcoin network. Then, when the other miners in the network receive the block containing the proof of work, they backtest the proof to verify its validity independently. If everything’s okay — they accept the new block as valid and include it in their copy of the ledger, thus confirming all transactions included in that block. As soon as one miner finds the proof of work for a given block, the other miners in the network immediately abandon their efforts to find a block at the same height and start computing the next block in the chain.

What are Bitcoin Block Rewards?

If you’re wondering why miners are going through all this effort to secure the Bitcoin network and help verify and settle peer-to-peer transactions — this is where everything becomes clear.

Understanding the mining process is critical because it is through mining that new bitcoins are created and distributed within the network. Namely, the first transaction in each new block added to the ledger contains a special type of transaction called a coinbase transaction.

The newly-minted bitcoins created in the coinbase transactions are called block rewards, and their exact quantity is hard-coded in and defined by the Bitcoin protocol. In the beginning, when Bitcoin was first launched, the block reward was set at 50 BTC per block. However, the creator of Bitcoin, Satoshi Nakamoto, designed the protocol so that every 210,000 blocks, the protocol would automatically update to cut the block reward in half.

To spare you the math, a new block in the Bitcoin ecosystem is mined roughly every 10 minutes, which equates to 144 blocks a day or roughly 210,000 blocks every four years.

So, every four years, the supply of Bitcoin gets cut in half — hence the term “Bitcoin halving”.

What will happen when the Bitcoin block rewards become very small?

Another vital feature of Bitcoin is that unlike fiat currencies whose supply rate is inflationary and theoretical total supply infinite, Bitcoin’s supply is finite, and the inflation rate is constant and predictable.

In practical terms, this means that after precisely 64 halvings, the block reward will be cut to zero, putting the total amount of bitcoins that can ever exist at 20,999,998. If everything goes according to schedule — and with Bitcoin, it always does — the very last Bitcoin will be mined sometime in the year 2140. At that point, miners will stop receiving block rewards in the form of newly-minted bitcoins and will be compensated entirely through transaction fees instead.

So, to answer the question directly: even after the block subsidy gets too small, the miners will still be incentivized to mine Bitcoin because they’ll keep generating profits by charging Bitcoin users transaction fees.

Why is Bitcoin Halving Important?

While Satoshi Nakamoto never explained why they chose this specific method for adding new bitcoin into circulation, in hindsight, the halvings proved paramount for Bitcoin’s incredible success as the Internet’s first native digital currency.

If there weren’t for the halvings and the block subsidy remained 50 BTC per block, then the entire available supply of bitcoins would have already been mined by 2016 — when Bitcoin was just beginning to hit the mainstream. If that were the case, the vast majority of bitcoins in circulation would’ve belonged to a small minority of early adopters, and Bitcoin would’ve never gained any traction amongst the wider population.

On the other hand, if the preprogrammed supply rate was set any lower than it was, then perhaps the distribution of new bitcoins would be way too slow for the asset to gain any traction with early adopters. Either way, the distribution model that was chosen proved to be just perfect because it quickly distributed a significant portion of bitcoin’s total supply and incentivized both miners and users to join while the network was still in its infancy, but it also concurrently accounted for the unwanted effects of inflation by limiting the total supply of bitcoins to 21 million and slowly decreasing the supply rate over time.

In summary, the havings allowed Bitcoin to both quickly gain popularity and also maintain interest in it for the long run.

How Do Halvings Affect Bitcoin Miners?

While some believe that halvings will eventually price out a significant portion of the miners out of the ecosystem and thus prove to be disastrous for Bitcoin’s security in the long run — so far, we haven’t seen any evidence that points in this direction.

Contrary to popular opinion, a 50% cut in block subsidy doesn’t directly translate to a 50% drop in mining profitability. The Bitcoin protocol has a dynamically readjusting mining difficulty, which, when coupled with the free-floating price on the market, introduces some elaborate game theory into the system.

Namely, when mining costs become greater than mining rewards — which typically happens right after halving events and lasts only for a brief period — the most inefficient miners are forced to close their operations and stop mining. Bitcoin becomes less secure when that happens because theoretically, it becomes proportionally easier to execute a 51% attack on the network. However, when the inefficient miners shut off, the protocol automatically readjusts the difficulty target, making it easier to mine bitcoins, which then translates into greater profits for the remaining, more efficient miners.

Following the same logic, the now higher profit margins further incentivize efficient miners to keep mining but also entice new miners to join the network and grab their slice of the pie. When that happens, the difficulty readjusts again, this time making it harder to mine bitcoins, and the profit margins are reduced once again. The tight profit margins now mean that the least efficient miners will again be priced out of the market, closing the loop and getting us right back where we started.

How Do Halvings Affect Bitcoin’s Price?

Before we move on, let’s quickly follow up on the previous point and consider the indirect impact halvings have on Bitcoin’s price through their more direct influence on miner behavior.

As we already explained, the 50% cut in block subsidy causes a great initial shock to miners and forces pruning within the industry. The most inefficient miners leave the network, and the more efficient ones are left with a bigger piece of the cake. When this happens, the efficient miners who were able to withstand the blow of the halving end up with higher profit margins than they had before, which allows them to keep a higher portion of the bitcoins they earn to sell later at higher prices. This pruning process effectively lowers the selling pressure caused by miners, which then indirectly benefits Bitcoin’s price.

With that in mind, halvings also have a more obvious and direct impact on Bitcoin’s price. Namely, with Bitcoin being a free-floating financial asset, its price is solely determined by the market forces of supply and demand. And as Economics 101 teaches us, if the supply of an asset decreases and the demand stays the same or increases, then the price of the asset will increase — which is exactly what happens in the months following every Bitcoin halving.

When Bitcoin halves, the supply of newly-minted bitcoins shrinks by 50%, which results in the price of Bitcoin going up, assuming the demand stays the same. In addition to this, the halving events cause a lot of hype in the mainstream media, which further fuels the fire by producing FOMO and ramping up the short-term demand for Bitcoin.