Near Protocol (NEAR) vs Solana (SOL) vs Fantom (FTM): Who Will Win the L1 Wars?

The Layer 1 (L1) Wars is a reference to competing Proof-of-Stake (PoS) blockchains such as Near Protocol (NEAR), Solana (SOL), and Fantom (FTM) vying for the top position to replace Ethereum (ETH). 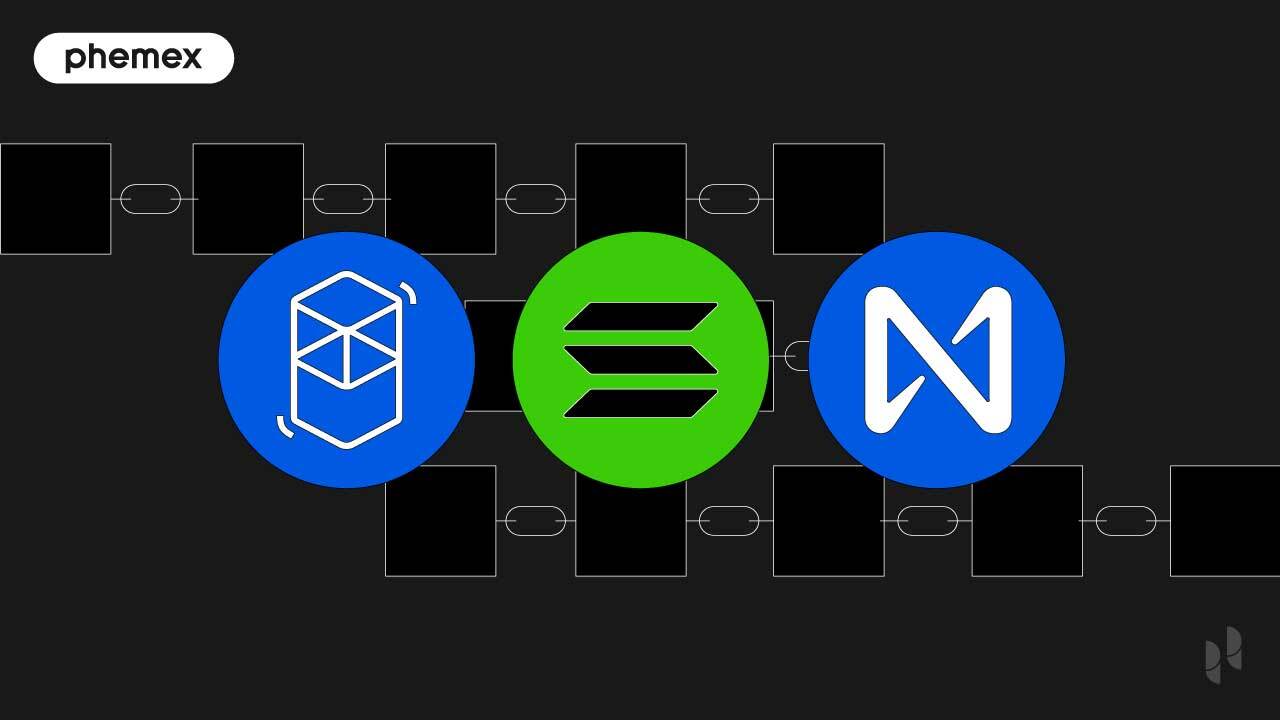 To understand why this matters, we have to rewind history. The Proof-of-Stake revolution was a response to the high power requirements of the original Proof-of-Work (PoW) consensus protocol, which the first two cryptocurrencies Bitcoin (BTC) and Ethereum run on.

Ethereum, the first-ever programmable blockchain that enabled smart contracts to be built on top of its network, soon became a victim of its own success. The network wasn’t built to scale, and as transactions piled up, users had to pay outrageous gas fees to trade on-chain.

With the benefit of hindsight, new protocols such as Near Protocol, Solana, and Fantom started building blockchains that were more scalable and energy efficient; transacting on any of these costs less than a cent.

There are slight variations in the speed and toolset required for users. However, the difference between NEAR, SOL, and FTM is miniscule compared with other earlier blockchains such as  Bitcoin and Ethereum.

What Is Near Protocol (NEAR)?

Near Protocol is an L1 blockchain that first emerged in 2018 and was initially designed with the intention of providing higher throughput, faster speeds, low-cost transactions, and cross-chain compatibility.

NEAR was one of the first chains that implemented the “sharding” technique, which is a revolutionary PoS method for blockchain scaling. Using sharding, all transactions on the blockchain are split into chunks known as “shards”. This ensures that blocks reach finality in less than 2 seconds. The consensus mechanism on NEAR is called “Nightshade”.

The development of NEAR is spearheaded by a DAO called “Near Collective” comprising a sizable community of developers and researchers. The sharding-based consensus mechanism allows NEAR to scale to infinite levels without becoming congested. One of the main advantages it has is that the network is constantly stable and rarely experiences downtime.

NEAR was initially not EVM (Ethereum Virtual Machine) compatible. An EVM-compatible network can interact with existing Ethereum tooling such as MetaMask and users only have to change the RPC settings to use it. This was changed with the introduction of “Aurora” which provides EVM compatibility and faster finality. Developers can now port over their ERC-20 tokens to the NEAR blockchain using Solidity programming language and the fees are over 1000x lower on average compared to Ethereum.

Near Protocol has a maximum supply of 1 billion tokens, of which close to 700 million are circulating – an advantage for investors due to little future dilution. Over 44%, or $3 billion worth, are currently staked on the protocol. It stood out for being one of the first L1s to implement sharding and will likely remain among the top 20 largest projects in the crypto industry.

Trade NEAR on Phemex now:

What is Solana (SOL)?

Solana is an L1 blockchain that was founded by Anatoly Yakovenko, a Dropbox engineer back in 2017. Solana has the fastest transaction time in crypto with 40-milliseconds, making it faster than both NEAR and Fantom (5x of NEAR and 60x of Fantom). Solana’s fees are also comparable to NEAR’s, while Fantom has the highest fees at 1.5 cents on average.

Solana was a long project in the making because it introduced a new toolset that is not compatible with the EVM or any existing Ethereum tooling. The reason Solana is so fast is that it was one of the first blockchains written entirely in Rust.

Rust is considered the fastest network programming language aside from C. The blockchain has a millisecond block production and the fees are a fraction of a cent. However, DeFi users on Solana cannot use existing EVM-based tooling such as MetaMask the way they can on NEAR and Fantom; they must install Solana-based wallets such as Phantom.

Solana wasn’t really prominent for the initial few years until it received the backing of Alameda Research, a large crypto investment firm. During the 2020 bull run, Solana became one of the top gainers in crypto and rose from less than $2 to an all-time high of over $250. Solana has a circulating supply of 300 million, out of a total supply of 500 million which is smaller than both NEAR and Fantom.

The staking algorithm on Solana is based on Proof-of-History (PoH) which is a slight variation of the existing PoS model. Transactions are time-stamped using a “Verifiable Delay Function” algorithm. This algorithm requires a step-by-step sequence to complete a transaction, which is time-stamped as an event on the blockchain. Each event has a unique hash and this allows nodes to check when the events happened. The timestamps have a built-in “clock” that tracks historic transactions, hence the name ‘Proof-of-History’.

Solana’s DeFi ecosystem is rivaling Ethereum’s with Solanart recording billions in daily NFT trade volume. Solana is the blockchain with the highest staked volume in dollars after Ethereum 2.0 with $20 billion in value staked, or over 75% of the supply.

The main downside of Solana compared to Fantom and NEAR is that the network has gone down multiple times over the last year. The efficiency, speed, and low cost of transacting on the Solana network make it subject to powerful DDoS attacks that can affect validators. Validators have suggested raising fees on the network to increase the security.

What Is Fantom (FTM)?

Fantom is a smart contract-powered L1. Fantom became popular for its high DeFi trading activity and DAPP innovation. The DeFi TVL of Fantom is currently two times higher than the market cap of the FTM coin. Fantom launched in late 2018 and really took off during the past year. Fantom’s supply is higher compared to NEAR and Solana with 2.5 billion coins out of 3 billion. During the past year, Fantom’s price soared from $0.01 to over $3.5.

The Fantom blockchain is based on a DAG (directed acyclic graph) which is a data structure where each block is displayed as a hash or a group of hashes, similar to Ethereum’s. The main advantage of Fantom is that it’s difficult to attack as validators can operate leaderless. The Fantom consensus algorithm, called Lachesis, is not only Byzantine Fault Tolerant but also asynchronous.

Let’s say the network is attacked and many false transactions are sent. The validators on the Fantom blockchain would validate transactions on their own, without working through all the incoming transactions. This takes a while longer compared to Solana and NEAR at an average time of 2 seconds per block, but it is still faster than Ethereum.

Fantom’s price fluctuated the last few years due to its association with Andre Cronje, a very well-known Ethereum developer. He first deployed Yearn Finance (YFI) support for Fantom and integrated it with SushiSwap (SUSHI) as well. He helped build up the Fantom blockchain until his resignation in March 2022 when he retired from the crypto space.

The FTM token price took a blow at the news but development continued. Fantom has a larger DeFi TVL than NEAR protocol despite having a much lower market cap as a currency.

NEAR vs. SOL vs. FTM: Which Is The Most Decentralized?

As these blockchains are based on a Proof-of-Stake consensus protocol, there is a higher degree of centralization in all of them compared to Bitcoin where miners from all over the world pool in to decentralize the network by contributing hash power.

The two reliable indicators we can use to measure the decentralization of a PoS chain is the % of the total supply staked and the number of validators. If more people are staking their coins, they are decentralizing the network. In this regard, Solana has an edge over both Near and Fantom with over 75% of the total supply staked. Fantom follows at 47% and NEAR is last with 44% staked.

In terms of validators, Solana wins again with over 2,000 validators compared to Near with 100 and Fantom with 60. Fantom has received criticism that it’s the most centralized chain as a few whale wallets own the vast majority of FTM coins – even more so than on Near and Solana.

Who Is Wining The L1 Wars?

The L1 wars involve more blockchains than Near Protocol, Solana, and Fantom. For example, coins such as Avalanche (AVAX), Cardano (ADA) and Tron (TRX) also participate in the L1 wars and offer similar features. One metric that can help us measure the success of a blockchain is the TVL (total value locked). This measurement represents the sum of all money deposited in a network and its applications.

According to DeFi Llama, Solana has the edge over the two with $4.2 billion TVL, followed by Fantom at $2.1 billion and Near Protocol in last place at $500 million. We should note that all of them are down in recent months as a result of Bitcoin’s downturn. The TVLs were three to five times higher when Bitcoin was at its peak.

Despite that, they all pale in comparison to Ethereum’s $70 billion TVL which makes us conclude that Ethereum is really winning the L1 wars. The TVL rank list can change overnight. Terra (LUNA) was the second largest chain after Ethereum by TVL and then it dropped out of the top 10 following the TerraUSD (UST) crash.

Conclusion: Near vs SOL vs FTM

Near Protocol, Fantom, and Solana are all promising projects that aim to become the dominant L1 in the DeFi sphere, and till date, have been delivering on speed, efficiency, and cost-effectiveness. Compared to Ethereum, these blockchains have a clear advantage in scaling and speed because of newer technology implemented in their protocols.

At the end of the day, comparing Solana, Fantom, and Near is like comparing Pepsi to Coca Cola. Some people prefer Coke, while others prefer Pepsi. These chains use the same tooling and work with similar staking algorithms; the only materially different blockchain here is Solana with its more unique toolset.

Performance-wise, all of these L1’s have provided excellent ROI for investors over the last two years. It will be a close match as these chains continue competing with one another to shape and power the overall DeFi ecosystem.