In May 2022, Terra Luna crashed and burned, wiping out tens of billions of dollars from the pockets of both retail and institutional investors.

At its peak, which was just a month earlier, Terra’s native governance token Luna was trading at $120, and the Terra blockchain overtook Solana to become the sixth largest cryptocurrency by market cap. With almost $19 billion in circulating supply, Terra’s stablecoin UST was the third largest stablecoin after USDT and USDC, which was why its downfall was so shocking.

And yet, in certain circles, it was not wholly surprising. Of particular note is the fact that the bulk of the demand for UST was coming from one protocol on the Terra blockchain, the Anchor protocol, which had locked up about 80% of all the UST in circulation. And this was because it was offering a fixed interest rate of 20% p.a. on UST, something no other crypto firm was able to beat. Early detractors pointed out the unsustainability of such a scheme, but any criticism was brushed off with no small amount of derision by co-founder and CEO Do Kwon.

The collapse of Terra Luna also shone the spotlight on the soundness of algorithmic stablecoins like UST. Being uncollateralized by definition, algorithmic stablecoins are more capital-efficient but at the same time, are more prone to speculative attacks and manipulation. The fact that the UST supply was linked to valuation of the governance token of the blockchain made it even more vulnerable to devaluation risk.

When the UST lost its 1:1 peg to the USD amid souring market sentiments, it triggered a loss of confidence in the entire Terra ecosystem, including its LUNA token. Even its Bitcoin reserves ($1.8 billion in early May), meant to provide reinforcement for the entire protocol, did nothing to fend off an unstoppable spiral. On May 12, the price of Luna fell 96% to under $0.10 within just 24 hours, with the UST faring no better. In the ensuing days, Bitcoin dropped by 20% and most altcoins by 50% or more.

As decentralized finance (DeFi) moves to become increasingly mainstream, the crypto community is looking for ways to stabilize crypto and make it viable for real-world adoption.

Terra Luna is a blockchain protocol that aims to do this by providing an ecosystem for algorithmically governed, decentralized stablecoins that are pegged to currencies across the globe. Despite the Terra protocol having multiple cryptocurrencies running in its ecosystem, it only has one native governance token, the LUNA Token. 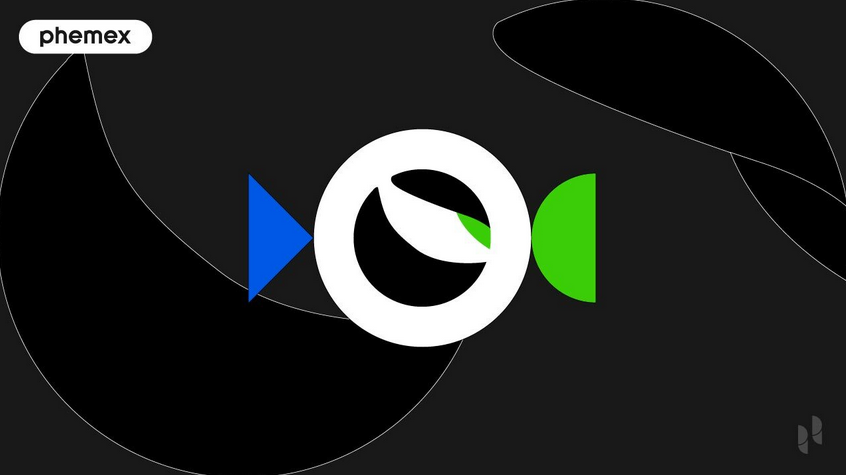 What Is Terra Luna?

Terra Luna is a blockchain built around a family of stablecoins to enable easy crypto transactions on a global scale. Recognizing that most stablecoins, such as Tether (USDT), are pegged to the value of the USD, the Terra Luna founders saw a window for the growth of global crypto adoption with real-world usage. This outward-looking approach for the growth and adoption of crypto, is what makes Terra different from other blockchain networks and stablecoin protocols. It does this in two ways:

Within a short period, Terra Luna saw swift adoption and growth of its native Terra Luna token (LUNA), as well as the creation of the most used stablecoin in its ecosystem, TerraUSD (UST). The LUNA token, currently the 8th largest crypto asset on the market, is one of the fastest-growing cryptocurrencies in the industry. The TerraUSD, or UST, on the other hand, rapidly became one of the most adopted stablecoins on the market.

What Is The Terra Alliance?

The Terra protocol was developed in January 2018 by Terraform Labs, a Korean blockchain enterprise founded by Daniel Shin and Do Kwon. The company was incubated by a conglomerate known as the Terra Alliance, a collective of 15 Korean and Southeast Asian e-commerce companies that processes $25 billion in transactions annually.

Before founding Terra, Shin and Kwon both established successful companies outside of the blockchain industry. Shin founded TMON, an e-commerce enterprise otherwise known as South Korea’s Alibaba, and CHAI, a softbank-backed Korean payment app with more than 2.7 million users.

Do Kwon, on the other hand, studied computer science at Stanford and made the Forbes 30 under 30 list in 2019. Prior to co-founding Terra, Kwon worked at Microsoft and founded Any-Fi, a startup specializing in peer-to-peer telecommunications solutions such as meshed Wi-Fi networks.

The intention behind Terra is to create a backend protocol for various applications developed by Terraform Labs and the Terra Alliance that would have immediate real-world applications.

Terra is a Turing-complete blockchain protocol that wants to bring DeFi to the real world. To do this, the network encourages developers to build on its blockchain with a view to offer a stable, scalable DeFi ecosystem. Some of its most prominent DApps include: 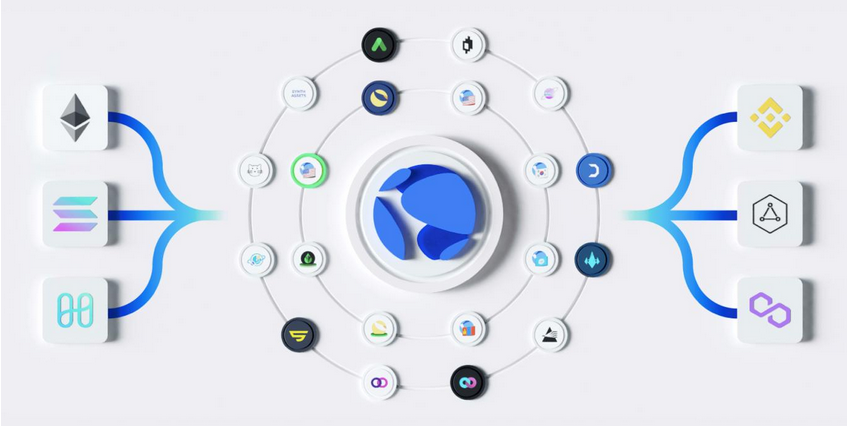 Terra Luna Crypto: What are Luna Tokens and Terra Coins

Terra Luna cryptocurrency can be somewhat confusing, as not only does it have its own platform token, the LUNA token, but it also has a whole family of Terra stablecoins, known in its group form as TerraSDR. There is also confusion over how Terra stablecoins are more stable than other stablecoins in the market. To gain clarity on this, continue reading.

What Is The Luna Currency?

The Terra Luna blockchain has its own Luna currency, in the form of LUNA, as well as the Luna currencies within its ecosystem, the Terra stablecoins.

The Terra stablecoin achieves price stability by adjusting its supply according to real-time fluctuations in demand.

Through this method, Terra leverages market forces to achieve price stability for its stablecoins. When UST’s price deviates above $1, arbitrageurs can step in to collect risk-free profits by purchasing the UST currently worth more than $1 for $1 worth of LUNA and then immediately sell that UST for a profit. Therefore, Terra stablecoins rarely deviate much from their peg.

The Terra stablecoin aims to differentiate itself from other algorithmic stablecoins on the market through this mechanism in order to achieve greater capital efficiency and scalability. 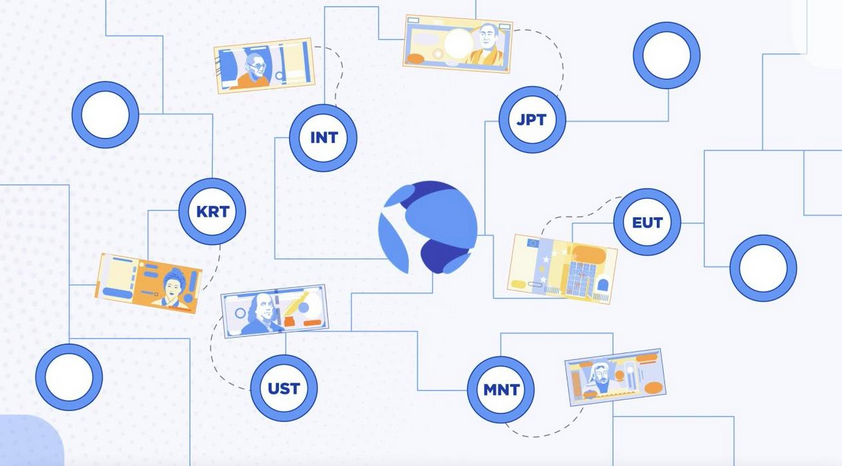 What Is Luna Foundation Guard (LFG)?

Despite Terra’s protocol maintaining price stability by leveraging the market forces, it still depends on a certain threshold of demand within the Terra ecosystem, either through LUNA’s price or Terra’s transaction volume, to work.

This is because value enters the Terra ecosystem through exchanges between fiat and Luna, meaning the system’s stability depends on the demand for various Terra products and stablecoins. As Terra’s adoption rate rises, Luna’s value is maintained, which guarantees stable mining rewards for stakers and further stabilizes the entire system. However, if the demand decreases too much, the system is disrupted, validating nodes cannot be rewarded, the security is compromised, and it breaks down. To avoid this, Terra was already boosting mass adoption through CHAI and other successful products built by the Terra Alliance members. However, with the 2021 bear market and another on the horizon in 2022, the founders decided to act.

The Luna Foundation Guard (LFG) was set up by Terra co-founder, Do Kwon, who saw a need to add another stabilizing layer to Terra stablecoins. The LFG acts to secure the Terra protocol by buying up BTC to add to the reserves for its most popular stablecoin, UST.

The intended effect of this BTC buying spree is to minimize damage to the Terra Luna protocol, and by extension the LUNA token, in addition to boosting the wealth of the protocol. At the time of writing, the LFG is in the process of raising $3 billion, with at least $2.2 billion already raised, to buy BTC.

The plan for LFG is to help maintain a UST peg to the dollar during downward peg deviations. This will go hand in hand with the coin maintaining its dollar peg by issuing and destroying LUNA tokens.

How Does Terra Work?

The protocol relies on a set of 100 validators who verify, settle transactions, and secure the system by running full nodes to commit blocks to the blockchain. Their primary role is to help the decentralized network reach and maintain consensus on the blockchain by broadcasting votes containing cryptographic signatures signed by each validator’s private key.

In order to participate in broadcasting, validators must either bond (lock for a minimum of 21 days) their own LUNA tokens or have LUNA tokens delegated/staked to them by other token holders. Luna holders that decide to participate in staking are called delegators and share the same benefits and responsibilities as the validators.

This means that while the delegators get to participate in securing the network and earn a portion of the revenue generated by the validators, if that validator misbehaves (double-signs transactions or remains inactive for a prolonged period) and gets slashed, the delegators will also get slashed.

In general, the Terra protocol has two primary ways of rewarding the validators and their delegators:

In the spirit of decentralization, Terra validators can also participate in the protocol’s governance by voting on various protocol improvement proposals made by the community. The voting power of the community is proportional to their total staked amount, including delegations, however, it’s important to note that Terra’s blockchain design sacrifices overall decentralization for speed and scalability. That is to say, Terra is considerably less decentralized than some proof-of-work-based blockchains, but it makes it up by delivering orders of magnitude higher transaction throughput.

Despite being developed in 2018 and launched in 2020, the Terra Luna price did very little until 2021. This was a time when the rise of altcoins and DeFi began to attract a much wider audience to crypto, meaning that having a global network of easily transferable, exchangeable, and compatible stablecoins was very convenient.

Entering the new year, the Luna Terra price experienced a dramatic  drop, with its Luna token price falling to $46 on January 30, 2022. During this period, the founders realized that the stability of their Terra stablecoin offering was their priority, as not only was it a major selling point, but it also backed up the rest of the ecosystem. On January 26, 2022, LFG began buying up BTC — 8,588 BTC on that day alone. By the end of February, the Luna token price was back up to $91.14, and with the formal announcement of the LFG’s plans in March, the Terra Luna price surpassed its previous record and hit an all-time-high of $109 on March 29, 2022. 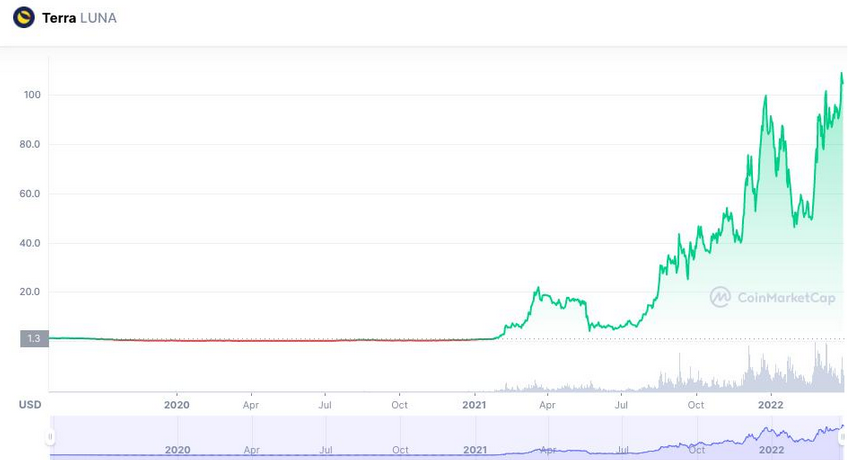 While most crypto projects are either trying to cater to existing crypto users or onboard new ones, Terra harbors a grand vision of bringing crypto to real-world products and services that people are already using, without the need to know how crypto protocols work.

Judging by what Terra has already achieved in the two short years since its launch, it seems they have found a product-market fit for their stablecoin and DeFi solutions. At the same time, Terra Luna knows that volatility and scalability are constant challenges standing in the way of global-scale crypto adoption. With its innovation in stablecoins and development of an entire DeFi ecosystem, however, one thing is clear–Terra Luna is on a seemingly unstoppable momentum to fuel crypto adoption in the real world.