Solana vs Ethereum: Is Solana Really an Ethereum Killer?

As the progenitor of smart contract technology and the first blockchain to challenge the dominance of Bitcoin, Ethereum has been able to establish itself as the second largest crypto in the world. But despite its strong position in the market, the network’s growing pains and slowed development has led to the rise of numerous challenger projects, colloquially known as “Ethereum Killers.”

One of the major projects that have begun to challenge Ethereum is Solana, which aims to provide similar functionality at greatly enhanced efficiency and lower fees. As the market has continued to mature and Ethereum Killers such as Solana assert themselves, more and more traders are starting to wonder if the market is big enough for Ethereum and its competitors.

Created by Vitalik Buterin, Ethereum (ETH) has revolutionized applications and services in the same way Bitcoin (BTC) revolutionized how we look at currencies. Ethereum provides users with greater control over the services they use by eliminating intermediaries and replacing them with programmable and automated smart contracts.

The advent of smart contracts gave birth to much of the functionality used in the crypto space today. Neither decentralized apps (DApps), non-fungible tokens (NFTs), nor decentralized finance (DeFi) would be possible without the technologies introduced by Ethereum. The majority of crypto projects are based on core Ethereum technologies to some extent, and many of them got their start as tokens based on the ERC-20 standard before migrating to their own mainnets.

As the foundation of many of the crypto applications we use today, it’s no surprise that Ethereum has by far the largest number of hosted applications and users. The amount of DApps on Ethereum has risen gradually since the network’s release, totaling nearly 3,000 at the time of writing. Ethereum is so pervasive that the majority of decentralized exchanges (DEXs) require the payment of ETH or ERC-20 tokens such as Tether (USDT) or USD Coin (USDC) to execute trades. 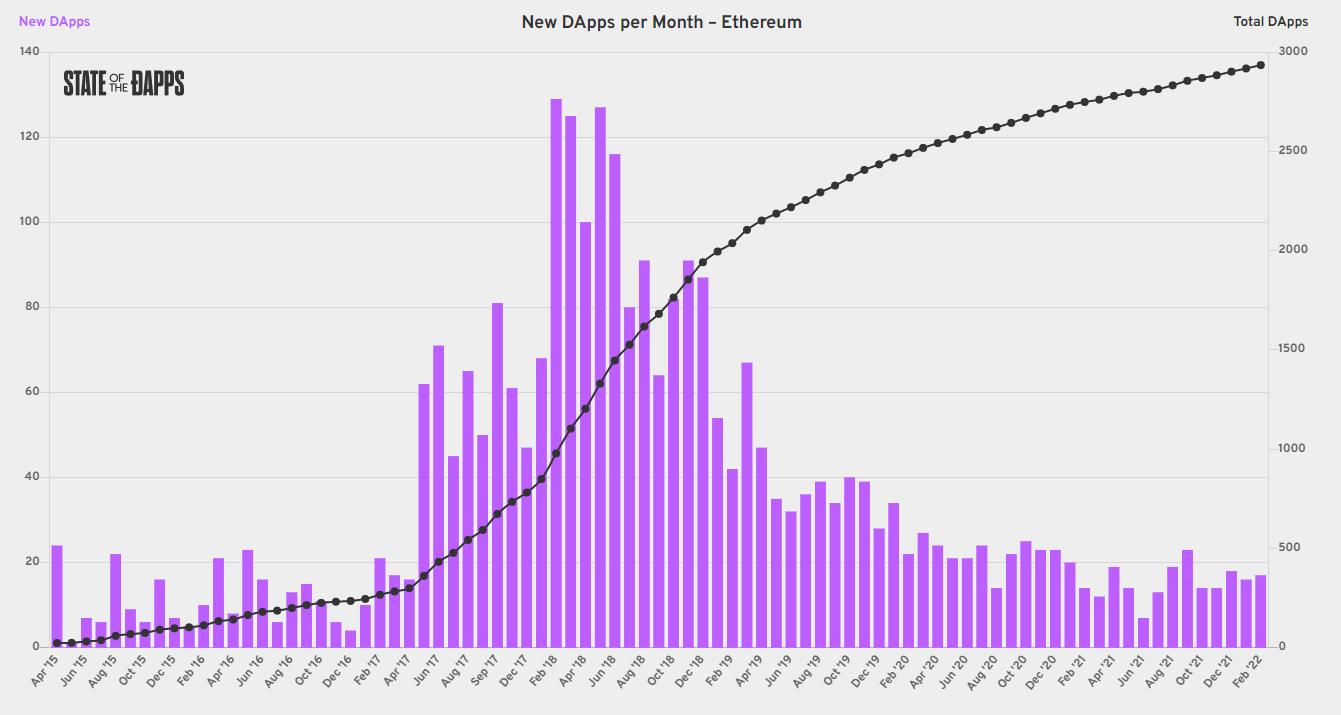 DApps on the Ethereum network from April 2015 to February 2022 (Source: State of the DApps)

The downside to Ethereum’s high level of adoption is that the network has largely been unable to keep up with its own growth. This can be most clearly seen in the gas problem that has plagued the network ever since the popularization of DeFi. As more and more people use Ethereum DApps, the cost of gas increases as operations on the network bid up the price. In the long term, the price of gas has risen nearly threefold from 13.06 gwei in March 26, 2019 to 34.69 gwei in March 26, 2022. As can be seen from the chart below, sudden surges of network activity (such as during the infamous Black Thursday) can drive the price of gas into the hundreds of gwei.

Another unique feature of Ethereum is the relative maturity of the project. With a large amount of mature DApps and a loyal userbase, Ethereum has been able to establish itself as one of the strongest players in the crypto space. One area in which Ethereum’s scale has proven beneficial is its large amount of liquidity, the lifeblood for keeping any project above water. When compared to most other networks, it’s far easier for traders to find counterparties on Ethereum so that they may move their assets freely.

Created by a team of Qualcomm veterans, Solana (SOL) has positioned itself as a solution to many of Ethereum’s most critical issues, namely slow transaction times, high gas fees, and poor scalability. The Solana network claims to be able to process up to 65,000 transactions per second (TPS) on a single global state, a significant upgrade to Ethereum, which is limited to around 15 TPS.

While Solana lacks the adoption of the Ethereum network, the assumption is that the project’s underlying technologies will allow it to scale in a far more efficient manner. Solana is of particular interest to developers and users who have grown fed up with the high gas fees and slow development pace of the Ethereum network.

Solana realizes high speeds through its unique proof-of-history (PoH) mechanism, which serves as a decentralized timestamp that keeps track of the order of events. Through PoH, Solana is capable of executing smart contracts in a secure and concurrent manner, granting it an advantage of proof-of-work (PoW) blockchains such as Ethereum, which are often bottlenecked by consensus mechanisms.

As with other “Ethereum Killers” such as Cardano (ADA), Solana represents an attempt to iterate on the innovations of the original Ethereum network from a clean state of development. Though the Solana ecosystem is far less mature than Ethereum’s, the relative efficiency of Solana transactions may give it a key edge should the release of Ethereum 2.0 fail to materialize in the near future.

How Do Solana and Ethereum Differ?

While Solana currently boasts a massive lead in terms of TPS (65,000 vs 15), the Ethereum 2.0 update is expected to be able to reach up to 100,000 TPS. It remains to be seen when the Ethereum network will be completely migrated to proof-of-stake (PoS), as Ethereum 2.0 has already been delayed for years.

The DApp ecosystem on Ethereum is extremely mature, and includes well-known projects such as Uniswap (UNI), Curve Finance (CRV), and OpenSea, the world’s largest NFT marketplace. Currently, the total value locked (TVL) in Ethereum DApps stands at $121.3 billion, the highest in the world by a significant margin.

By comparison, the DApp ecosystem on Solana is still in its very early stages, with only two projects exceeding $1 billion in total volume. The largest DApp on Solana is Raydium, an automated market maker (AMM) designed to provide greater liquidity to traders. Another application is Serum, a non-custodial DEX that provides cross-chain asset swaps, decentralized access to stablecoins, and a variety of wrapped tokens. Right now the TVL in Solana DApps stands at $7.22 billion.

While both ETH and SOL have proven to be excellent investments over the long-term, Solana has shown significantly greater growth over the past year, rising by a staggering 514% compared to Ethereum’s very solid 83%. It’s worth noting that this is not necessarily indicative of project performance as a whole, as Ethereum grows by smaller percentages due to the fact that it’s worth significantly more than Solana. Despite its parabolic growth over the past year, Solana still has a significant way to go before it reaches the scale of Ethereum. Solana is ranked #8 in the world by market cap, while Ethereum is ranked #2.

Solana vs. Ethereum: Which is a Better Investment?

Of the multitude of projects that have risen to challenge Ethereum over the past years, Solana has undoubtedly proven to be one of the most successful. Though the ecosystem is still in its early stages, Solana has managed to prove its value to the market and currently stands as the eighth largest project in the world by market cap.

Solana still has a large amount of room to grow, though the project may face bottlenecks more in terms of attracting users and developers rather than technical scalability. By contrast, Ethereum boasts a large and stable base of users and applications, hampered by slow technical progress made over recent years. While Solana has grown much faster than Ethereum in the past year, it should be noted that Ethereum as a whole has still come much further. The volatile nature of the crypto market and economic instabilities means that there’s no guarantee that either project will experience the same growth as in 2021.

Ethereum still reigns supreme, but it must be able to catch up to the technical innovations of “Ethereum Killers” such as Solana and Cardano to keep its position as top dog. Should the Ethereum 2.0 upgrade be further delayed, the high and volatile projects of the network may cause Ethereum to start losing developers and users to projects who have already implemented more efficient alternatives.