What is Ontology: Will Self-Sovereign Identity Finally Become a Reality?

Typically, using the Internet or any app involves giving up personal information across many websites and platforms such as those belonging to Amazon, Apple, Microsoft, Visa and Facebook. The centralized nature of the servers used by these corporations to store our data mean that we get to enjoy the benefits of these apps and platforms for free, but at a far greater non-monetary cost than we realise.

Namely, there is very little data privacy–all the data users provide are owned by corporations and subject to monetization, commercialization, or just blatant misuse.

Secondly, data security is lacking–there have been countless reports of hacks, security breaches and leakages of personal data resulting in billions of dollars lost to online fraud thefts.

Ontology is an open-source blockchain focused on providing a platform for digital identity, trust, and data privacy. It is primarily powered by Ontology Coin (ONT), and its second token, Ontology Gas (ONG), is used for transaction fees. 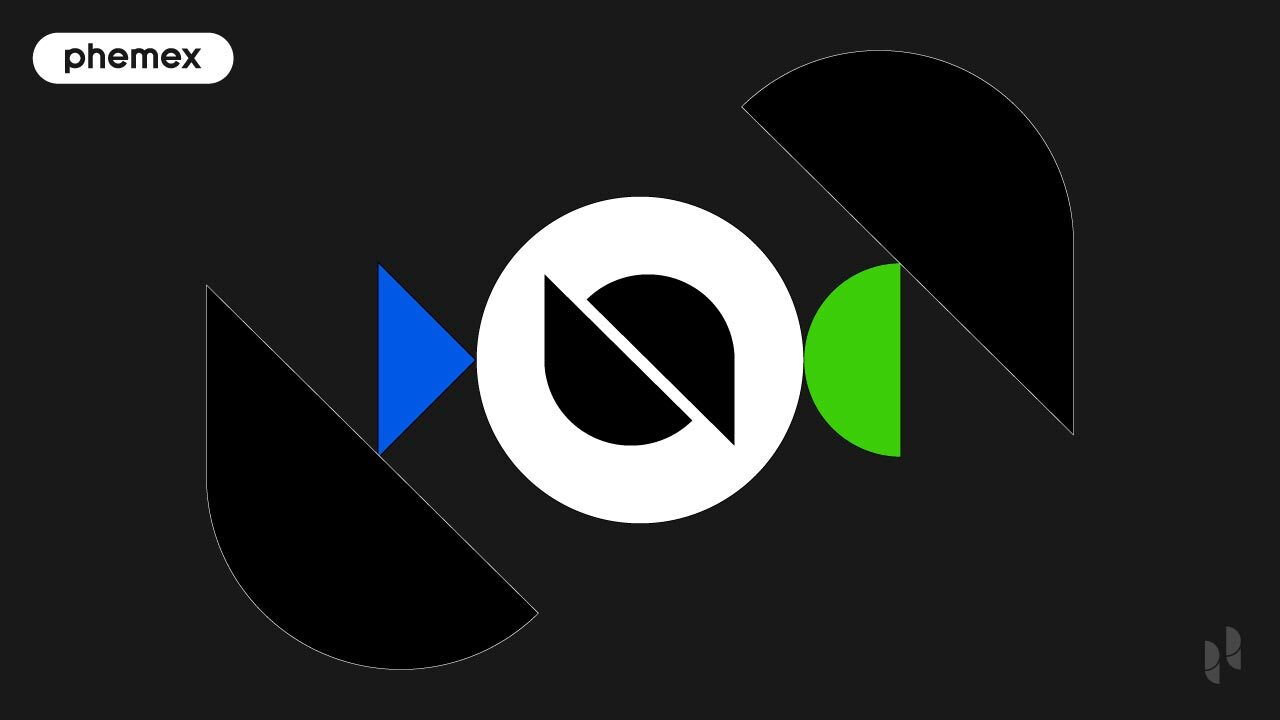 Ontology is an open-source blockchain that seeks to address this problem of data security and data privacy through a blockchain-powered platform. Some of the use cases proposed in the 2017 Ontology whitepaper include verifying people and objects, collaborative data exchange, financial services, and reputation evaluation.

What is Ontology crypto?

Ontology is primarily powered by the Ontology coin (ONT), currently trading at $0.22, with a circulating supply of around 875 million tokens for a market cap of $192,699,271.

Ontology was originally built on the NEO blockchain, before launching its mainnet in June 2018. The Ontology blockchain uses a dual-token system, meaning that two tokens are used to run its ecosystem–Ontology coin (ONT) and Ontology gas coin (ONG), which is used for gas fees.

ONG is released, or “unbound,” as rewards to holders of ONT when they stake ONT tokens. This therefore incentivizes ONT staking, which provides capital to support the operations of the blockchain network.

Unlike many other cryptocurrencies, Ontology was not launched through an initial coin offering (ICO). Instead, it distributed coins to its community through airdrops (freely distributed coins for newsletter subscribers and others) and bounties (coins given to developers for helping with Ontology’s technical development). It also held a private token sale for major private investors.

What Does Ontology Do?

In Ontology’s proposed system, a user has one single verifiable identity on the Internet and full autonomy over how their data, from names to ID numbers, addresses, mobile number, birth dates and other sensitive information–is used, stored and accessed. In other words, they have complete power and control over their personal data, which can then be securely used to verify their identity online or to sign up for apps and more.

The fact that all this data is stored on a decentralized ledger means that there is no single point of failure, which minimizes security breaches and misuse of data by third party centralized entities.

This concept is termed self-sovereign identity (SSI), in reference to the user having full control and governance over their online identity. Trust anchors serve to verify these identities within Ontology’s distributed identity network. Ontology claims that this innovation, part of what they call “decentralized identity” (DeID), can protect users’ data from being hacked, as well as help maintain their data privacy.

It is via the ONT decentralized hot wallet that users can manage their digital identities, personal data, and assets across multiple blockchains. The app also includes the user’s ONT Score, which is based on Ontology’s decentralized credit rating system OScore. This reputation score can help a user obtain DeFi loans or other financial services from Ontology’s credit-based lending protocol, WING, as well as from other compatible blockchains (most notably Ethereum). The wallet also allows users to store, send, and receive both ONT coins and ONG coins as well as ETH coins, allowing for greater interoperability with other blockchains and DeFi functionality.

How Does Ontology Work?

This combination blends the strengths of each mechanism to achieve faster transaction speeds than the more energy-intensive proof-of-work (PoW) consensus mechanism used by Bitcoin (BTC).

Who Is Behind Ontology?

Ontology was co-founded by Jun Li, a blockchain systems architect and Andy Ji, a manager with experience at various blockchain and finance-related organizations. Now, Li leads the team for the blockchain’s continued development at Ontology offices in Shanghai. Ji, meanwhile, serves as Ontology’s chief strategy officer.

Early in its development, Ontology received funding from private investors. In addition, it has notable ties to the China-based, B2B-focused blockchain company OnChain and its related smart contracts platform, NEO (both were started by the same co-founders).

The ONT coin and blockchain were first launched as part of the NEO platform, and some of the initial Ontology crypto airdrops gifted ONT to holders of NEO tokens. Close ties between the two blockchains have thus persisted even after Ontology launched its independent mainnet in 2018. In 2019, Ontology and NEO announced a partnership in creating the cross-blockchain platform known as the PolyNetwork.

However, Ontology has since distanced itself from the NEO ecosystem and OnChain, expressing a willingness to work with other platforms and partners. Its recent efforts have focused on improving the compatibility and interoperability of Ontology with Ethereum smart contracts and other blockchains.

What Does Ontology Do?

One major component of Ontology is its decentralized identity framework: ONT ID. Typically, using the internet involves adopting a diverse set of personas and credentials across many websites and platforms. But in Ontology’s proposed system, a user has a single verifiable identity on the internet and greater autonomy over how their data is used. This concept is termed self-sovereign identity (SSI). Trust anchors serve to verify these identities within Ontology’s distributed identity network. Ontology claims that this innovation, part of what they term DeID (decentralized identity), can protect users’ data from being hacked and maintain their privacy.

As part of this framework, Ontology launched the ONTO Data Wallet, a smartphone app for managing a user’s digital identities, personal data, and assets across multiple blockchains. The app also includes the user’s ONT Score, which is based on Ontology’s decentralized credit rating system OScore. This reputation score can help a user obtain DeFi loans or other financial services on the Ontology blockchain and other compatible blockchains (most notably Ethereum).

What are Ontology use cases?

One sector that Ontology has recently focused on is the automotive industry. Ontology has proposed a solution using the blockchain to authenticate car parts, facilitate payments and agreements along the supply chain, handle insurance claims, and more. According to Ontology, this solution is currently used by a major German automotive company.

Ontology also envisions use cases for individuals through the ONTO app. These include buying concert tickets in the form of ONT NFTs, settling insurance claims instantly after a car accident, and even renting out your car to other users to earn ONT. However, in contrast to the business use case, these examples for individuals are still at the theoretical stage.

By October 2020, 82 dApps in total were running on Ontology, with more than six million dApp transactions recorded on the Ontology blockchain. This may seem insignificant compared to Ethereum’s 3000-some dApps, but Ontology nonetheless seems to have a healthy ecosystem with room for further growth.

Launched in the midst of the 2018 crypto crash, ONT nonetheless managed to rise from $1.48 USD to its all-time high of $8.96 in May 2018. However, its price dropped back down in the months that followed—in line with persistent bearish sentiment in the crypto space. Some price movement was seen in 2019 but it was mostly traded for well below a dollar throughout 2019 and 2020.

Unfortunately, its bull run didn’t last and the ONT price sank throughout the summer and took the ONT market cap with it. This may well have been due to its plans to offer use cases for individuals through the ONTO app, including buying concert tickets in the form of ONT non-fungible tokens (NFTs), settling insurance claims instantly after a car accident, and even renting out one’s car to earn ONT. These applications were curtailed by the COVID19 pandemic and lockdowns on concerts, commuting and car sharing. 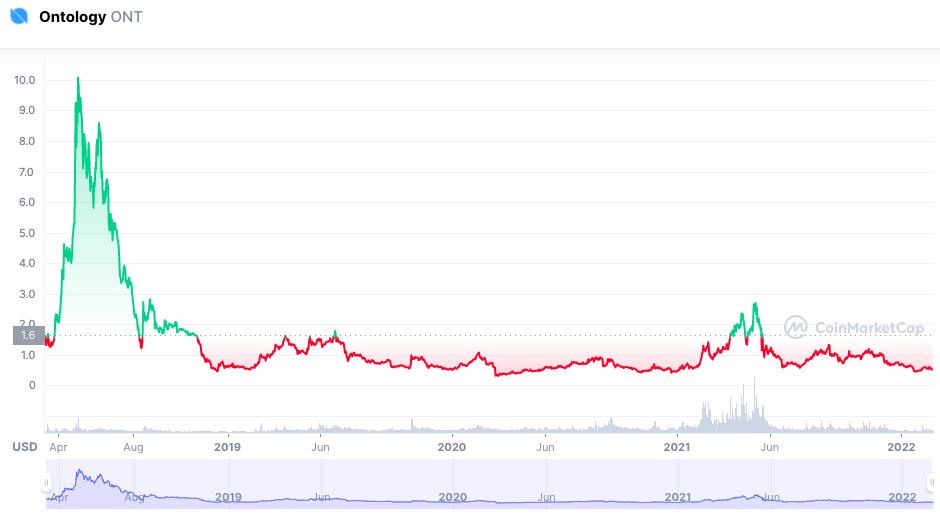 Additionally, Ontology’s operations in China, which is known to be less than open to decentralized cryptocurrencies, may be further hindering its growth. If the country’s planned introduction of a digital yuan is accompanied by even more stricter regulations on cryptocurrencies, China-based blockchain projects such as Ontology could be negatively impacted.

However, Ontology’s data- and privacy-centric focus on the decentralized transfer of data and online self-identity ownership come at a time when data security breaches are on the rise, and users are becoming increasingly aware of data harvesting. Moreover, its innovations in identity verification, data exchange, and credit scoring allow for many possible use cases for both businesses and individuals. Solid market adoption and proof of effectiveness will be the key to driving its price up again–if it can survive the crypto selloff of 2022.

Where to Buy Ontology (ONT) Coin?

Phemex offers both spot and contract trading for investors to choose from. However, for beginning crypto buyers, spot trading is recommended. To buy ONT on Phemex, follow the instructions below.