Illuvium (ILV) is a 3D multi-player and battler NFT game. Illuvium is the first high-budget game on Ethereum (ETH) that has been in development since 2020 and is scheduled for release in 2022. The Illuvium token “ILV” is currently trading at $600 with a market cap of $400 million and 650,000 tokens in circulation. The maximum supply is 10 million tokens. Illuvium is a desktop PC/Mac game that unfolds on a ruined planet inhabited by mythical monsters called Illuvials. Illuvium’s graphics are similar to a commercial-grade video game, but it implements blockchain DeFi elements such as NFTs, yield farming, and asset exchanges. The battles unfold around a Battle Arena and each Illuvial’s task is to fight other Illuvials to the death. If they’re not fighting, a player explores the Illuvial game play landscape to participate in daily quests.

The POV perspective of a player is a survivor who is on a spaceship in a futuristic intergalactic fleet. The story starts when the player is out in space and discovers one ruined planet with extreme weather and oceans on fire. Once they land on the planet, they discover Illuvials who live there, and start collecting them.

The story of Illuvium is set in a fantasy world where users tame and own “Illuvials” – game monsters that can be acquired as NFTs. Illuvials can battle each other, mutate, and grow with unique powers. There are over 100 Illuvials in the game. Some Illuvials are harder to find than others and are considered rarer. The monsters ultimately battle in the “Battle Arena” and winners receive crypto rewards.

In the gaming industry, “AAA” games are high-budget games with large development teams. Illuvium is the first Metaverse blockchain game in history that received an AAA rating. There are over 200+ veteran designers and game developers working on the game.

Illuvial features commercial-grade 3D graphics that surpass that of popular blockchain games such as Axie Infinity (AXIE) and The Sandbox (SAND) which are considered 2D games. The beta version of the game is available for testing and the full-fledged release is expected in 2022.

How to Play Illuvium Beta?

Illuvium hasn’t been released yet but users can gain access to a beta release. The Illuvium release date was scheduled for Q1 2022 but was later pushed back further into 2022. At the moment, a limited number of players are allowed to play the beta version.

If a player wants to gain access to the game, they must fill out a registration form for the private beta:

The private beta registration requires information such as discord username, machine specs, graphics card, and an email address. This allows the Illuvium team to process beta testers with PC configurations that can support the game.

What Is Illuvium NFT?

Illuvials are game monsters that a player uses to battle in the arena for crypto rewards. Each Illuvial is a unique Illuvium NFT that can be sold on NFT marketplaces such as OpenSea. Some Illuvials are very difficult to obtain and this will likely reflect in the price of NFTs. As Illuvium runs on a layer-2 NFT marketplace called IlluviDEX, users will be able to trade them gas-free.

In the Illuvium gameplay, a player has the perspective of a hunter who collects these monsters on the destroyed planet. The player has to tame and subdue Illuvials to capture them.

The Illuvials in the game are dotted all over the destroyed planet’s landscape. The planet has radiation that affects them in different ways. Illuvials can have affinities for fire, water, earth, and air. 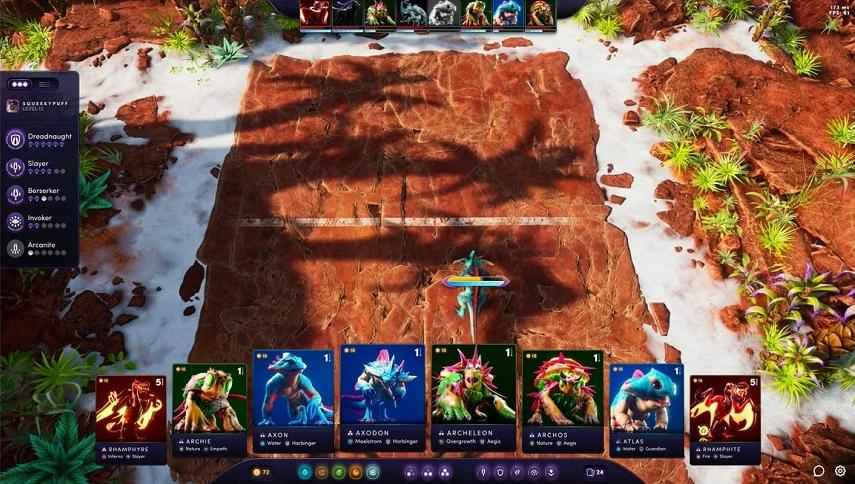 The gameplay in the Battle Arena with Illuvial monsters.

There are also five classes of Illuvials:

Aside from classes, each Illuvial’s skill varies based on metrics such as attack damage, speed, and savagery. The original rating of an Illuvial will not be the same if they win a game, but they get upgraded ratings. One way to win a game is to create a team of Illuvials based on their affinities or classes. This could increase their attack strength and attack effectiveness.

What Is Illuvium Built On?

Immutable X has over 9,000 transactions per second and uses ZK Rollup scaling technology. This means that all transactions are processed off-chain, but they are still logged on the Ethereum mainnet and can be read on block explorers. Users can trade in-game assets and make an Illuvium land sale without any fees and get instant settlement.

ZK rollups are secure and used to bypass the congestion of the Ethereum mainnet. This way, users transact off the main chain in large batches, and the transaction fees cost a fraction of a dollar. The Illuvium team likely made this choice to build on a layer-2 network for an expected large user base without leaving Ethereum altogether.

Who Is Behind Illuvium?

Illuvium’s development was primarily lead by Kieran Warwick and Aaron Warwick, two Australian entrepreneurs and game developers. They worked together to build a sizable team of international game developers that were seniors in their field and collaborated to invent a AAA game in record speed.

Once the ILV token was released and the beta version went out, the co-founders grow their team from a few dozen developers to over 200 developers within a year.

What Is The Illuvium Crypto?

Illuvium’s token, ILV, is the combined utility and governance token of the “Illuvinati Council” – the Illuvial DAO. ILV is the main token of the ecosystem and is the in-game reward token. Players battling in the Battle Arena can win ILV rewards from other players and sell it on the open market.

ILV has a maximum supply of 10 million tokens which is approximately half of Bitcoin’s total supply. Roughly 650,000 (7%) of the total supply is in circulation now. ILV is currently trading at $600 with a market cap of $400 million. The fully diluted Illuvium market cap (once all tokens are released) is $6.2 billion.

The ILV token distribution is as following:

All of the tokens were distributed already besides the yield farming and gaming rewards tokens. The tokens have vast locking periods over multiple years and yield farming has received the majority-allocation of the supply. Yield farming is reserved for game players who stake their tokens and the team released an updated V2 version of their staking platform. Gaming rewards are inactive yet as the game is not released for the public.

Players who win ILV tokens from battles have their tokens locked up for 1 year before they can withdraw them and sell them on the market. This is considered escrowed Illuvium and will unlock exactly 356 days since it’s obtained.

The only way to bypass the 1-year wait is to exchange the tokens for sILV in the IlluviumDEX (a built-in exchange). The sLIV Illuvium token is an in-game token that allows players to purchase game assets and Illuvials, but can’t be sold outside the game.

Is Illuvium a Good Investment?

The ILV price has been extremely bullish as the market responded favorably to a high-budget blockchain game. The Illuvium price is relatively high due the limited supply of only 10 million tokens. If Illuvium ends up the most successful blockchain game, some predict prices in the five digits for each ILV token. 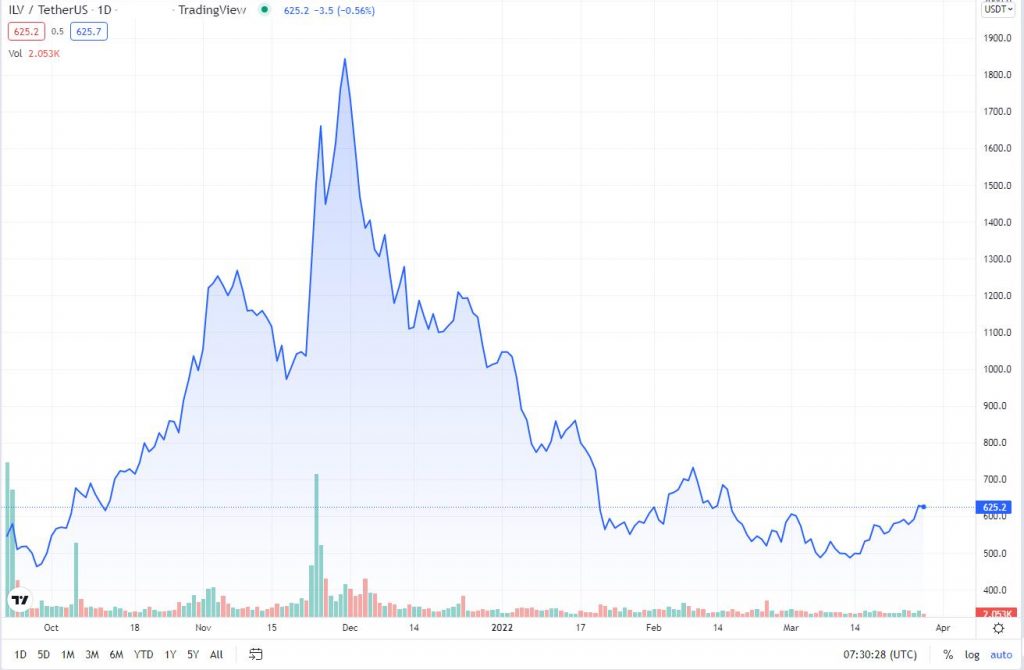 Illuvium pre-seed investors who initially financed the game purchased the tokens at $1 per token and the price went up to $50 per token during the seed phase. Once the token went live in April 2021, it was trading slightly higher than $60 and reached an all-time high of $1,900 in December 2021.

It has since decreased to $600 as the state of the altcoin market was affected by Bitcoin. The Illuvium release date was also pushed back from Q1 2022 and this had an effect on the price. If the game is released in Q2 or Q3 of 2022, the token could potentially see a comeback.

The bullish case for ILV is that competing tokens such as AXIE built on 2D games have a market cap of $4 billion with a diluted market cap of $18 billion, which means the ILV token is still undervalued at only $400 million and $6 billion diluted respectively – considering this is a 3D AAA game.

Illuvium gives us a peak into the future of blockchain gaming and evidence that blockchain-built games can reach commercial AAA levels. Illuvium features characters that can be battled and upgraded to immerse players in the game. State-of-the-art designers and developers are working to make it appeal to gamers outside the crypto sphere.

The Illuvium ecosystem is large and the token is thriving even before the official release. The beta version of Illuvium is currently available to a limited number of players. The team chose a layer-2 scaling solution to make trade fees affordable for a mainstream user base. This could lure more gamers in the crypto industry and encourage the development of high-quality games.