What is The Sandbox: A Virtual World Where You Own Everything

Launched in 2020, The Sandbox is a virtual gaming system that allows players to create Non-Fungible Token (NFT) digital assets on the Ethereum (ETH) blockchain. The Sandbox’s native token, SAND, is used within the platform to perform a wide variety of activities. SAND trades at $0.2249 per token with a circulating supply of 701 million, for a market cap of $158 million. 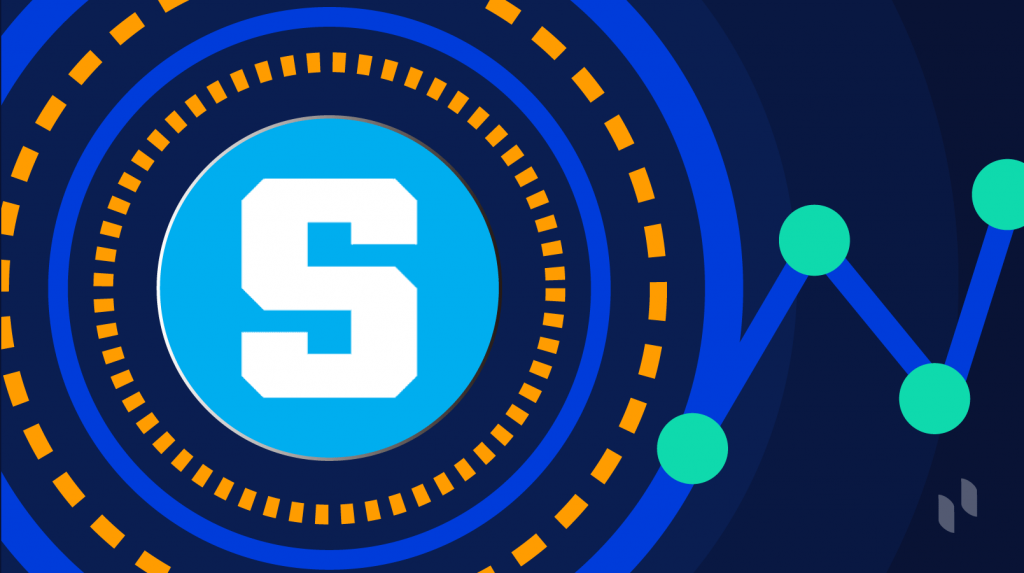 What Is The Sandbox?

The Sandbox is an Ethereum-based virtual gaming platform where you can build and own NFT assets and make your own world. The Sandbox uses three types of tokens: ASSETS, SAND, and LAND. An asset is a token that uses the ERC-1155 standard and is created and traded by players on the Sandbox NFT marketplace.

According to The Sandbox’s CEO and co-founder Arthur Madrid, Sandbox will enable people to create assets that can be owned and governed by them and no one else. He told a writer at Gamesbeat that “the idea of blockchain in the metaverse is to build a new kind of digital asset, to create based on ownership and governance.” 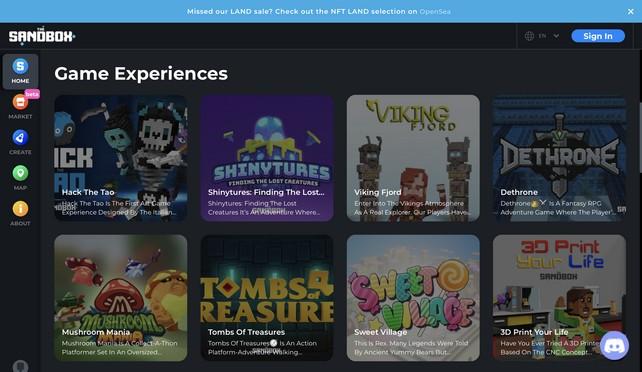 The Sandbox has the following main features:

VoxEdit is a software that players can use to create voxel-based NFTs, such as animals, vehicles, humans, and tools. Voxels are 3D pixels, similar to building blocks in Minecraft, that can be manipulated and transformed into any object.

In the past, voxel games were highly centralized and didn’t allow players to own their creations. The Sandbox has changed this by introducing NFT interoperability, which lets users take complete ownership of their voxel creations and use them seamlessly across different games.

These voxel NFT assets can be bought and sold on the Sandbox NFT marketplace. Users from other platforms can also access the marketplace and purchase assets from different games, not just the Sandbox game. This gives players the freedom to easily transfer their creations between platforms, resulting in “guaranteed security, authenticity, and true ownership.”

In Arthur Madrid’s own words, The Sandbox “offers everyone access to a new economic model where players and creators fully participate in the value creation chain and can benefit from the new paradigm where content is the platform.”

The whole idea behind the Sandbox is to create a platform where people can build whatever they want without a centralized authority. NFT assets that are created are stored in the blockchain, which means that they are not owned by game developers as in most other games, but the players themselves.

The Sandbox’s third major feature, Game Maker, will let players create and share their own 3D games for free. No coding experience is required, as the software provides visual development tools that let players see what they’re creating in real-time.

How to Use The Sandbox

First, you have to create an account on the Sandbox website and connect your MetaMask wallet with it. After setting up your profile, you will need to buy SAND coins to participate in most activities on the platform. Once you have bought SAND coins and transferred them to your MetaMask wallet, they will appear in your Sandbox profile.

If you want to add extra value to your NFT assets, you can buy ERC-20 tokens. In The Sandbox, these exist in the form of “Gems” and “Catalysts.” Gems add different attributes to assets, while Catalysts show an asset’s scarcity level.

In The Sandbox’s NFT marketplace, the beta version of which launched this past March, you can buy assets and use them to decorate your land. Keep in mind that these assets can only be purchased with SAND coins. Prices are determined according to the number of attributes an asset has. Once you have bought an asset, it will show up in your Inventory.

LANDs are physical spaces in the Sandbox platform that players can purchase and own as NFTs. Players can accessorize these LANDs, play games or host events on them, and rent them to other players. The Sandbox team owns around 10% of the total LANDs and uses them to hold special events.

LANDs can also be combined to form an “estate,” which counts as a “district” if it is owned by at least two players. A district has special governance rules, created by estate owners themselves, that affect all of the players that live in the district.

When you go to the LAND webpage, it will take you to a map that will display all of the LANDs that exist in the Sandbox metaverse. The Sandbox holds LAND sales in waves, several times throughout the year. 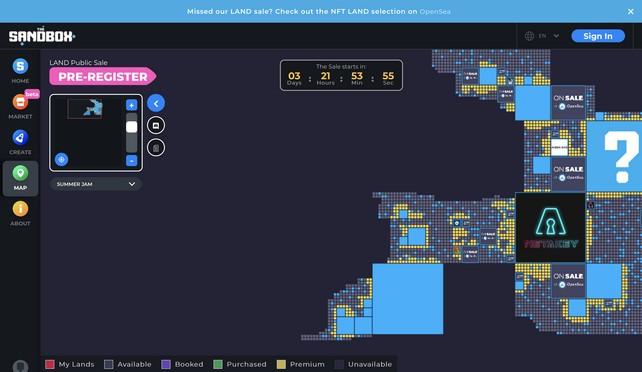 Who Is Behind The Sandbox?

The Sandbox was first released as a mobile sandbox game in 2012 by game studio Pixowl. When it was released, it generated over 40 million downloads and still boasts over a million active players. Pixowl was founded by Arthur Madrid and Sebastien Borget, who are respectively the studio’s CEO and COO.

Pixowl was already working on the blockchain-based version of The Sandbox when it was acquired in 2018 by the Hong Kong-based game company Animoca Brands. Animoca supported Pixowl’s vision, launching the blockchain version in 2020.

Throughout the years, Pixowl was also advised by various industry veterans, such as Ed Fries, who co-founded Xbox and was once vice president of game publishing at Microsoft.

As for funding, Animoca Brands raised $2.5 million for the development of The Sandbox in 2019. In the same year, the game received $2.5 million in funding from Square Enix, B Cryptos, and True Global Ventures.

In addition, the Sandbox has partnered with popular brands like The Smurfs, Atari, Care Bears, CryptoKitties, and many others. These brands now have voxelized versions of their worlds and collectible assets in the game.

The Sandbox’s native token SAND hit an all-time high of $0.857 in March 2021, but it is currently trading at $0.2249. Its CoinMarketCap ranking is #169 and its current circulating supply of 701 million represents around 23% of the 3 billion max supply.

25.82% of the total token supply was saved by Pixowl in a company reserve, and 17.18% of it was used for the seed sale of the token. 31% was distributed among the founders and the team members. 10% of it was given to advisors as rewards and 12% was set aside for a Binance Launchpad Sale. The remaining 4% was spent on strategic sales.

SAND’s price has been on a downward trajectory, mostly due to the FUDs created by Elon Musk’s tweets and China banning bitcoin mining. Between April and May, the price went from $0.33 to $0.72 and then crashed to $0.14 in mid-June. 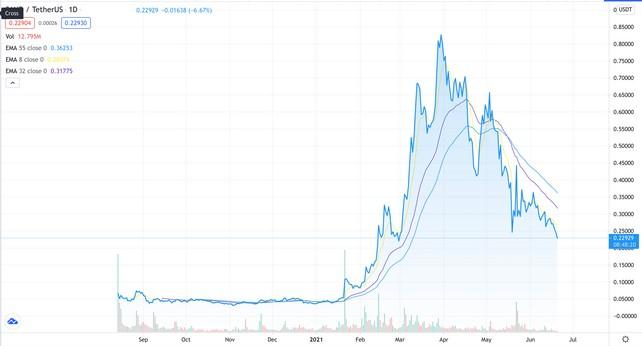 What Is the Future for The Sandbox?

A blockchain-based sandbox game involving player-owned NFTs is a unique concept that should gain traction quickly in both crypto and gaming spaces. The Sandbox currently has around 84,000 users and is expected to continue growing.

According to co-founder Borget, the company is targeting a “specific audience that views this as very exciting and unique,” and the idea of selling virtual land is new to most people and companies. In addition, Borget says the game has entry-level appeal, and people “will be able to play [it] without even knowing that it has blockchain features.”

In financial terms, The Sandbox is also making progress. April 2021 was record-breaking for the platform, as their LAND sales and market sales brought in over $8.5 million.

The Sandbox team also continues to add new features to the platform and upgrade its performance. For one, the beta version of its marketplace, launched in March, allows artists to monetize their NFTs.

Recent campaigns against NFTs’ effect on the Earth’s climate could cause some problems for The Sandbox, but the team is already pursuing corresponding solutions. For example, the team is working to reduce the carbon footprint of NFTs by integrating Polygon, a Layer-2 solution that uses 100 times less energy than Ethereum. Once the integration is complete, transferring NFTs from one user to another will be like sending an email.

You can stay updated on The Sandbox’s sales and other news by following them on their Medium page.

The Sandbox game is an exciting project that was created to disrupt the highly centralized gaming world. It gives complete power to the players by letting them own everything they create within the game.

The game also allows for the seamless transfer and exchange of NFT assets between different platforms. Many more games in the future will surely introduce innovative blockchain-based features, but The Sandbox has a head start as one of the first games to do so.