What Is Plant vs Undead (PVU): Earn By Growing An NFT Garden Play-To-Earn NFT games have become popular recently, with games such as Axie Infinity (AXIE) leading the way to multi-billion dollar market caps. NFT games attract players by allowing them to take ownership of in-game assets, stake for yield, and tokens.

The issue with most NFT games is that the game play patterns are predictable and the characters are similar. One game that stands out for its approach to NFT gaming is Plant vs Undead which incentivizes players to grow digital plants and fend off attacking monsters. If its name sounds familiar, that’s because it is inspired by the highly popular Plant vs Zombies tower defense game.

The Plant vs Undead token, PVU, is the in-game and governance token of the game. PVU has a market cap of $1 million with a circulating supply of 50 million tokens and a maximum supply of 300 million tokens.

What Is Plant vs Undead (PVU)?

Plant vs Undead is a free play-to-earn NFT multiplayer game built on the BSC network. The game play is set on a planet called “Plants”. In this planet, hundreds of different plants grow that have to be nurtured. The gamers’ task is to acquire seeds to grow plants in order to fight the “Undead.”

Players start out with a “Mother Tree” (which gives him protection against the Undead) and 6 non-NFT plants that can be grown and cultivated. Besides these free assets, players can also buy PVU tokens in order to purchase seeds and accessories for cultivation. They can also purchase fully-grown plants from the secondary market to grow their garden.

Plants vs Undead was primarily developed for mobile devices as on iOS and Android. There is also a Windows version and a browser version. In the browser version, players can connect their Web 3.0 wallet and trade on their own marketplace to purchase all the assets they need.

How to Play Plant Vs Undead?

The storyline of the game starts by introducing the planet Plant and allowing users to cultivate the “Mother Tree” and the 6 plants that come for free (which are not NFTs).

The player can select if they want to play in “Survival” mode or “Farming” mode. The game usually starts in the Survival mode, in which players engage in battle games between the Undead that immediately attack the Mother Tree.

To access “Farm” mode”, players are required to own 6 PVU tokens which is the equivalent of $1. They are given the option to purchase seeds that can grow into powerful plants and can be sold as an NFT. Mother Tree (left) and plants in the garden (right).

If the player successfully defends the Mother Tree from the Undead, they can get more plants since it helps cultivate the garden. The more plants a player has, the more synergy and attack power his garden has against the Undead. The plants give power to the mother Tree and they vary in strength and power.

There are also “Fire Trees” that give fire attack abilities to the player and can burn the Undead. If the Undead are successfully fended off in the first round, the player can upgrade or relocate their plants using the energy obtained.

There are different tiers to PVU NFTs such as “Common”, “Uncommon”, “Rare”, and “Mythic”. The rarer NFTs, which are more expensive to obtain, give the player higher powers in battles against the Undead.

The elements that comprise the plants also vary and include things such as parasite, metal, and ice. Every plant in the game has a unique skill-set or ability in a fight, which incentivizes players to combine different abilities and successfully fend off infections.

How to Get PVU in Plant Vs Undead

The more battles a player survives, the more PVU tokens they earn. PVU tokens are airdropped to players who successfully fight off the Undead. In other modes such as “Farming”, they can also earn Light Energy crystals which can be re-sold on the NFT market.

Another way to win PVU tokens is to water the “World Tree.” Players from all over the world join together to water it voluntarily using the in-game “water” asset to stand a chance to win PVU tokens or rare NFTs. The World Tree has to be watered every day; the more players participate, the larger the reward pool.

All players in the PVU game water the World Tree.

Like many other blockchain games, farming mode in PVU requires a Web 3.0 wallet (MetaMask) that must be connected to the BSC network. In “Farm” mode, users can cultivate their garden and prepare for battles. Farm mode is the most profitable aspect of the game, as a user can purchase seeds, grow and own an unlimited amount of plants and re-sell them on the NFT market. 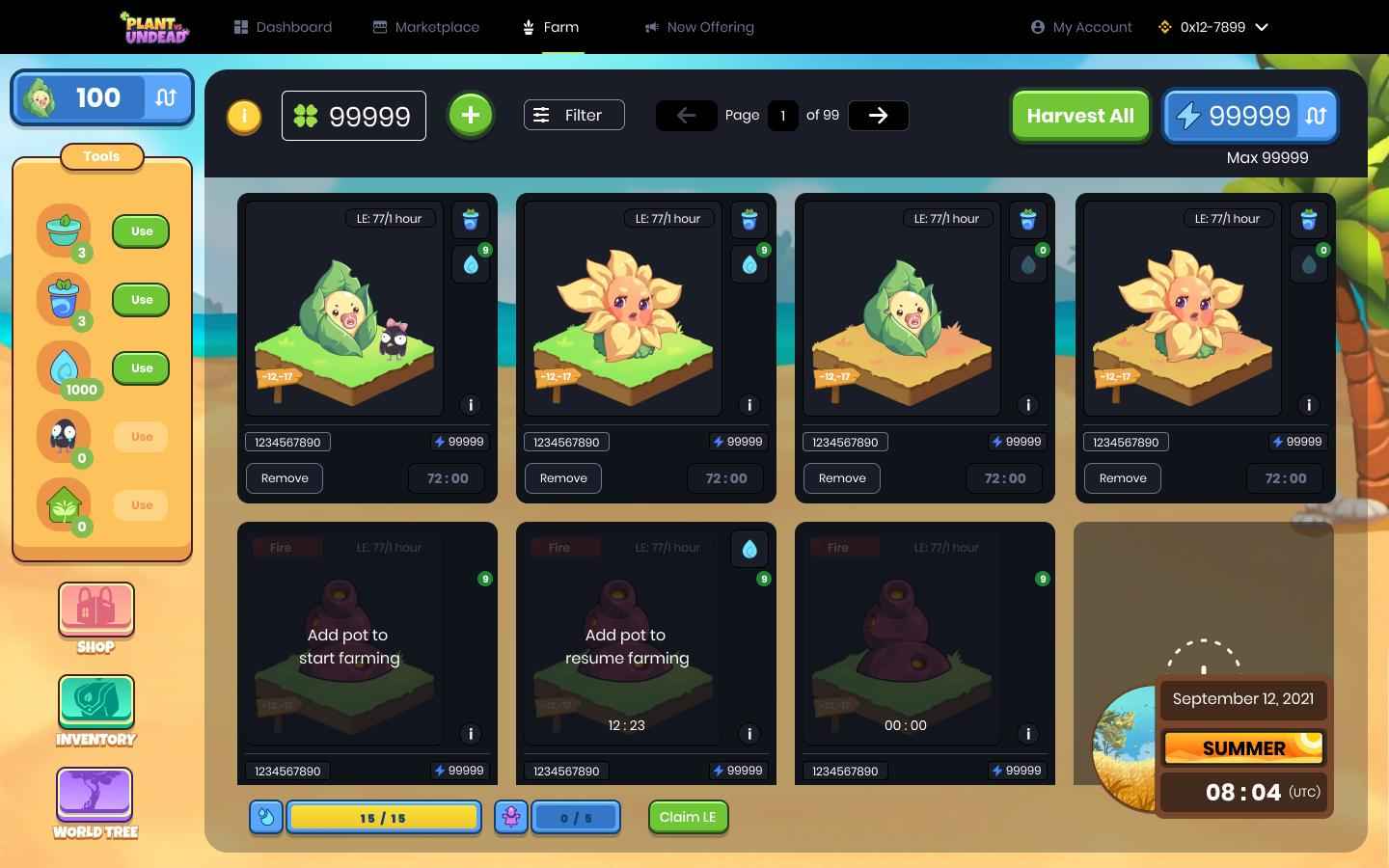 Farm mode requires care. If the player is not actively playing the game and caring for their plants by watering them, they won’t be able to bear “Light Energy” (LE) which is the in-game asset that can be exchanged for PVU tokens.

Plants can be planted, cultivated, and harvested. Effectively, a player could be profitable in the game even without playing in “Survival” mode because they could own a large farm and exchange their LE tokens for PVU tokens which can be sold on the market.

The Light Energy token can also be exchanged for other NFTs in the game or for seeds. The more a player invests in the game, the more light energy his plants will bear. This allows them to generate more LE tokens which they can use to improve their fighting ability in survival mode.

The NFT marketplace is focused on plants, mother trees, and land. In this marketplace, users can buy, sell, borrow, or lend their assets. All transactions on the marketplace carry a 5% fee.

For example, if we head to the “Plants” marketplace, we can pick among plants that have fire, ice, metal, parasitic, and other properties: The built-in marketplace allows players to sort the NFTs by the lowest price for purchase. If their Mother Tree is damaged in Survival Mode, they can also purchase other Mother Trees from players on the marketplace. Plants can be immediately purchased and used for cultivation or battle games.

The Plants vs Undead token, PVU, is the in-game and governance token of the PVU ecosystem. PVU is a BSC-20 token that is integral to the game and can be used to purchase plants, land, and Mother Trees.

PVU tokens are required for all purchases in-game and on the NFT marketplace. The distribution of the PVU token is the following:

The highest percentage of tokens in circulation is allocated for players in their rewards system. Players who win “Survival” games and cultivate the World Tree can win PVU tokens from the rewards allocation. 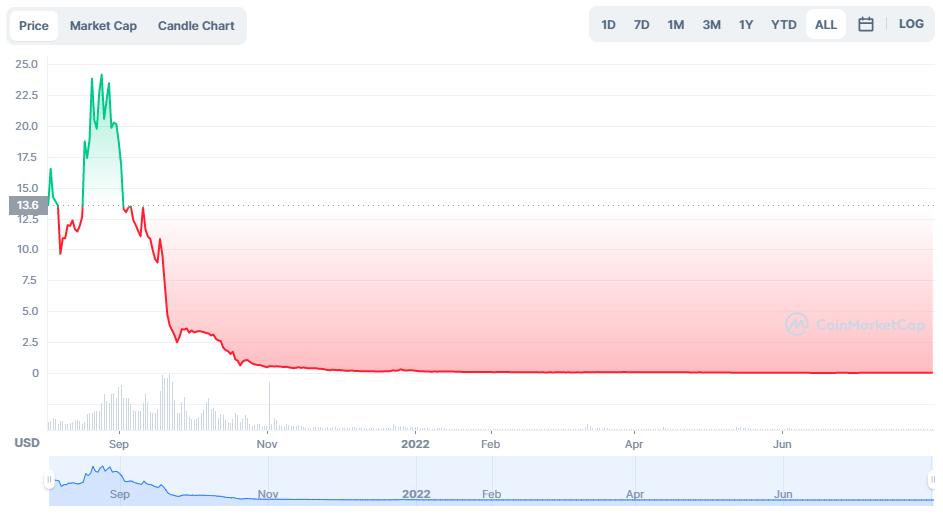 The PVU token price performance was bullish initially when the token traded at an all-time high of $25 in September 2021. The token has since depreciated over the last year as the crypto market entered a period of correction led by Bitcoin; most other play-to-earn game coins are in the same boat.

Plant vs Undead is an NFT game that takes a unique approach to the battle-game industry by allowing users to cultivate plants and grow a garden–making it stand out from other games that feature game characters. The PVU token has depreciated significantly since early 2022, but may see an uptrend if the team introduces new gaming modes with additional characters that could re-generate hype for the project, even in a bear market.