What is Axie Infinity (Axie NFT): A Pokemon-inspired, NFT game

Blockchain-based games can disrupt the gaming industry by targeting issues of ambiguity and centralization. The technology allows game developers to connect in-game items to the blockchain, thereby providing gamers with unique ownership and preventing account theft. As online communities grow increasingly more interested in blockchain gaming, developers are taking the opportunity to offer more than just a fun experience. They also want to give players income earning potential.

The most successful of these blockchain-based, play-to-earn games to date is undoubtedly Axie Infinity. A decentralized game that allows users to hold in-game items, such as NFTs, and earn a crypto income through playing. In 2021, the project achieved $1 billion in all time platform trading volume. Its Axie Infinity coin, AXS, meanwhile, is valued at just above $50 a coin, with a circulating supply of nearly 61 million, for a market cap of over $3 billion. 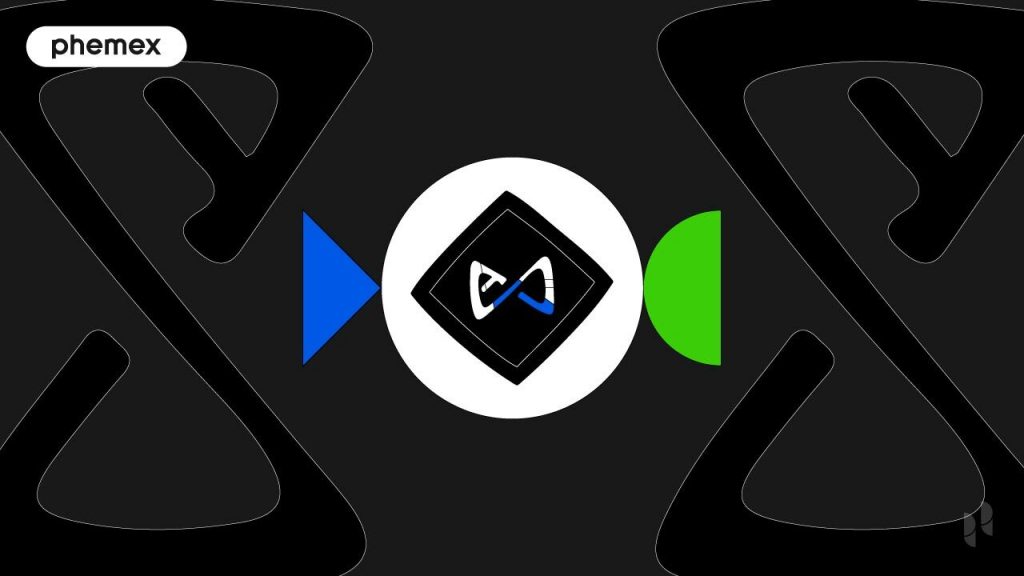 What is Axie Infinity?

Axie Infinity is a Pokémon-inspired, NFT-based gaming platform where users can earn tokens through gameplay and contributions to the ecosystem. Game mechanics primarily revolve around battling, collecting, and raising digital pets called Axies. These Axies are designed as non-fungible tokens (NFTs), so each one has its own unique value in the game and cannot be directly replaced by any other Axie. In order to join the game, new players must buy or borrow at least three Axies. Individual Axie prices usually range from $70 to over $100,000 in price, although the most expensive sold to date was valued at $820,000 and some of the rarest ones are listed for 5,000 ETH, or over $13 million at the time of writing.

How Long Has Axie Infinity Been Around?

Developed by Sky Mavis in 2018, Axie Infinity has been around for 4 years and is currently ranked in the top #10 blockchain-based games, based on number of active users. The game has monthly trading volumes of $77 million, with over a million Axies NFTs sold each month. Moreover, due to its ability to reward users in cryptocurrency, Axie Infinity has even taken on characteristics of a social network and jobs platform. The Axie Infinity marketplace offers a range of Axies to suit all players and budgets. (Source: marketplace.axieinfinity.com)

1 How To Get Started With Axie Infinity

Anyone who plays Axie Infinity is linked with cryptocurrency. That is because as a blockchain-based play-to-earn game, players will need crypto to buy Axies and crypto wallets to receive their gaming rewards. Axie Infinity can be very lucrative and a lot of fun, but to get started, players first need to make an investment — to play Axie Infinity, players must first buy or borrow three Axie character NFTs. These are imperative, as without Axies, players cannot battle, breed, or go on adventures — the main activities within the game. This initial cost is sometimes enough to put potential players off, but it must be remembered that players can recoup their money through Axie Infinity cryptocurrency rewards.

To buy the starting Axies, get set up to receive rewards, and start playing, follow the below instructions: 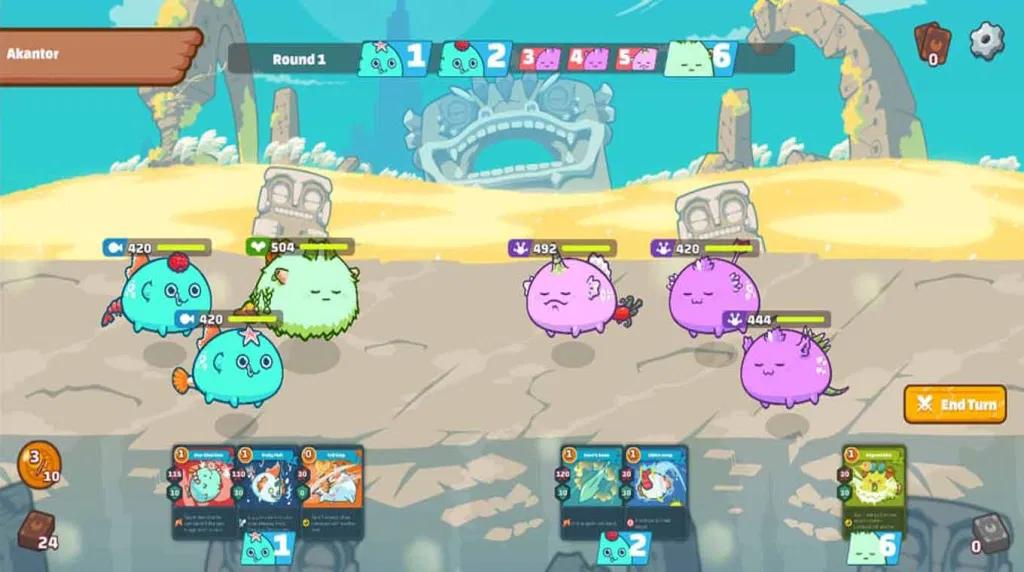 An Axie is a pet-like creature that gamers can collect, raise, and battle inside the Axie universe. Each Axie harbors different characteristics which define its role in the game.

These attributes come from Axie Infinity breeding, whereby a gamer can take two Axies with different qualities and then breed them to create a new one with a random selection of both parents’ attributes. Each of these Axies’ attributes are important during battles because they determine the damage levels that each Axie can endure or dish out.

Axies are also categorized by class. There are six normal classes as well as three secret ones.

Just like in Pokemon, certain classes are more effective in battle against others. An Axie’s class also holds some impact on its four attributes.

Furthermore, each Axie is made up of six body parts – back, ears, mouth, horns, eyes, and tail. Besides influencing the visuals, many of these parts have battle abilities associated with them, so they also factor into gameplay. Each Axie has a class and six body parts that influence its attributes (Source: medium.com)

How To Play Axie Infinity

Axie offers an immersive gaming experience while enabling players to earn through different in-gaming activities. Currently, a player can interact with the game in the following ways:

The battling system was the first protocol released by the Axie team. The system mechanics were inspired by games like “Idle Heroes” and “Final Fantasy Tactics.” It’s a turn-based card game system in which players must strategically evaluate which Axies and moves to use in order to come out on top. Experienced players should be mindful of their Axies’ class and attributes when calculating which actions to take during their turn. Players will often choose to purchase more powerful, and thus usually more expensive, Axies to win more games. This is because winning battles against other players means gaining rewards in the form of NFTs or SLP tokens (Smooth Love Potions), which are the ERC-20 tokens used to breed new Axies.

There are two types of battle in Axie Infinity:

Axie Infinity allows gamers to breed their in-game pets to create new offspring. This way, the Axie population will continue to evolve much like animals in nature. Players can either breed two of their own Axies together or pay for a date with another player’s Axie. Axie Infinity breeding requires the player to spend two types of cryptocurrency native to Axie Infinity: Axie Infinity Shards (AXS) and Smooth Love Potion (SLP). Each time an Axie is used to breed, the cost to breed that same Axie doubles. Additionally, each Axie can only be bred a maximum of seven times. The game takes place in a fantasy location called Lunacia. The in-game world is divided into tokenized plots of lands that can be upgraded using the different resources available in the game. As of now, Lunacia consists of 90,601 plots of Axie Infinity land, each representing an NFT that can be traded between players. With pricing from over $6,000 to over $26 million per plot of land, this leads to a whole new element on the Axie Infinity marketplace and economy: Axie Infinity land and real estate. The platform is also developing a Lunacia SDK, which is a map editor that will allow users to create new in-game experiences.

How To Make Money on Axie Infinity?

There are a few different ways to make money on Axie Infinity, with profitability varying with the Axie Infinity price. Although users can win both SLP and AXS crypto on the Axie infinity game, SLP is of a much lower value and can be used to breed Axies which can then win the much higher value token, AXS. Thus, in terms of making money from the game, players will usually focus on earning AXS.

What is Axie Infinity Shards (AXS)? The Governance Token That Earns Rewards

Short for Axie Infinity Shards, AXS is an ERC-20 token which, as the governance token on Axie Infinity, was solely built to align the incentives between the Axie Infinity developers and players. Users can win AXS by playing various games and battling other players within the Axie Infinity ecosystem, as well as by submitting user-generated content to sponsored initiatives. AXS can be used to participate in key governance votes or cashed out in the same way as one might cash out Bitcoin (BTC) or Ethereum (ETH).

In addition to earning AXS through gaming, token holders can stake AXS through the sidechain wallet to Axie Infinity, Ronin wallet, to receive both a AXS staking and treasury yield. This means that the token holders will have their tokens locked up (as many as they wish to stake) in exchange for interest. Initially, Axie Infinity staking offered 400% interest, although as more AXS has been staked, the interest rate has decreased, sitting at 130% in October 2021, and at 75% today.

The Axie Infinity price began steadily increasing almost immediately after launch, thanks to its similarities with the hit blockchain-based game CryptoKitties. Its ability to introduce purpose into the game, as well as create a near endless collection of Axies absorbed previous CryptoKitty gamers into its atmosphere and by February 2021, it was already clear that Axie Infinity and AXS was going to be a hit. Once gamers began playing the addictive game and realized its earning potential, the game and its AXS token shot up in value, riding out the crypto crash of 2021 and reaching a peak in November 2021 at above $160 a token. 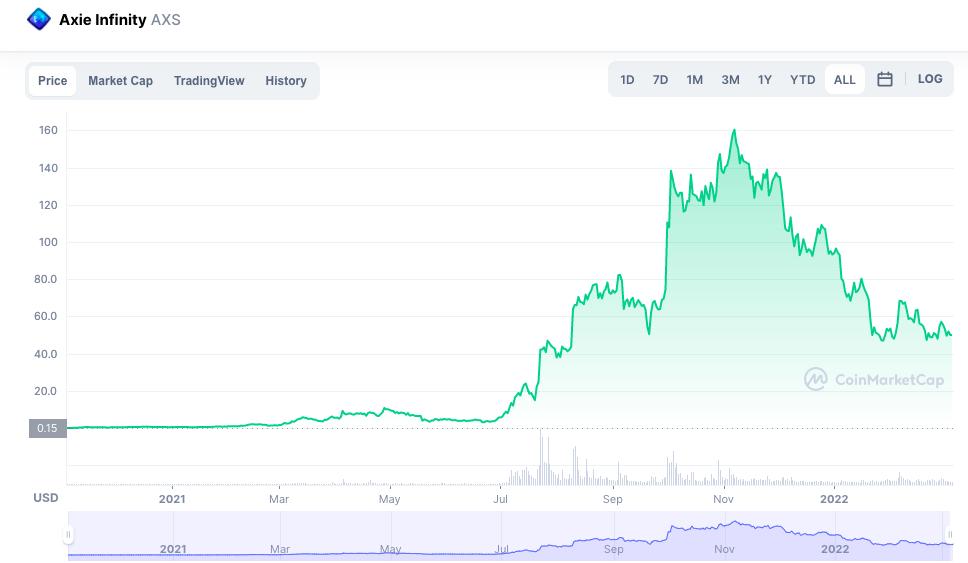 Unfortunately, following the introduction into the market of many other blockchain based, play-to-earn games, a decrease in its interest rates, and increased volatility in the market thanks to threats of government regulation and crypto bans, AXS has since taken quite the tumble. At the time of writing, AXS sits at a value of just above $50, which although a far cry from $160, it’s still way above its starting price of around $0.15.

What is the Future of Axie Infinity?

It’s hard to make an Axie Infinity price prediction in such volatile times, but with NFTs, play-to-earn gaming, and the Metaverse — all of which are ingrained in the Axie Infinity game — still very much at the forefront of developers and technology companies’ minds, the game still seems to have a fighting chance. Axie infinity has a loyal active user base, what seems like a never-ending Axie NFT collection, and lots of room to innovate in the increasingly popular space of virtual real estate. Despite having to ride out the volatile wave of 2022, it would seem that AXS has lots of potential for growth yet.

Axie Infinity has led the way for blockchain adoption in the gaming industry and in doing so has increased transparency, decentralization, and player ownership. Since the platform has introduced real-time earnings to gaming, some players have even made the game their full-time job. In the Philippines, for example, where the game is extremely popular, some players claim to have used the proceeds earned from playing Axie Infinity to buy real-world land and houses. However, with the price volatility that has come this year, those gamers will have suffered.

This highlights the youth, and thus general instability of the sector and reminds investors and gamers alike to be cautious. Having said that, the game offers great promise and with its loyal user-base will most probably rise again. Moreover, with innovations undoubtedly still to come, Axie Infinity is paving the way for true decentralization and ownership — two of the core values of cryptocurrency and blockchain technology.