Why is Ethereum’s London Hard Fork a Big Deal?

Activated on August 5th, 2021, the Ethereum London network upgrade is a hard fork that aims to make gas fees more predictable. It also lays further groundwork for the long-awaited Ethereum 2.0 upgrade. The name “London” comes from Ethereum’s new convention of using Devcon city names for its upgrades. The previous upgrade was “Berlin”, and the next will be “Shanghai.” What Is the London Hard Fork?

Despite the many positives of the Ethereum (ETH) Network, its high and at times unpredictable gas fees have long been a cause of headache even for the most enthusiastic supporters. The huge developer potential unleashed by the ERC-20 standard has made Ethereum a victim of its own success. The explosion of decentralized finance (DeFi) and more recently non-fungible token (NFT) decentralized applications (DApps) has on many occasions sent gas prices soaring as high as $80.

The London hard fork takes the first step towards addressing Ethereum’s gas and quality of life problems by making transaction fees less volatile and more predictable. Critically, London also introduces a mechanism in which a portion of all gas fees will now be burned instead of being paid to miners.

While unlikely to reduce fees in the short term, the London hard fork aims to speed up transaction times and counterattack Ethereum’s increasing supply. The upgrade also reduces the uncertainty for users who would previously be unsure if they sent enough gas to push their transactions through.

What Is an Ethereum Improvement Proposal?

The network’s problems of scalability cannot truly be solved until sharding and Layer 1 solutions come online with the Ethereum 2.0 mainnet. Upgrades such as the London hard fork aim to move Ethereum closer towards 2.0, while also implementing key Ethereum Improvement Proposals (EIPs) to improve the network’s functionality.

EIPs are standards that specify new features or processes for the Ethereum network proposed and implemented with the consensus of the community. Network upgrades such as London consist of a series of EIPs that when activated, must be implemented by each Ethereum client on the network. In addition to serving as a technical specification for network changes, EIPs are the core way in which the Ethereum project realizes decentralized governance of the network.

Before the London hard fork, Ethereum’s gas fees were structured in a manner where every user seeking to make a transaction would have to place a bid with a miner in what’s called a “first-price auction.” The result of this system is that users would have to propose gas fees, with no guarantee that the fee would be high enough for a miner to push the transaction through. Users could also prioritize their transactions by paying a premium on the gas fees, which would create feedback loops of users trying to outbid each other when the network was congested.

EIP-1559 aims to prevent major fluctuations in gas prices by setting a “base fee,” which is then algorithmically adjusted in accordance with demand for block space on the network. EIP-1559 also introduces a new transaction model in which users can specify the maximum fee they are willing to pay, along with a maximum “inclusion fee” they are willing to pay the miner for priority. When a miner picks up a transaction, the user is then refunded the difference between the maximum and the sum of the base fee and the miner tip. The block size has also been doubled with the idea of targeting 50% block utilization, which should help smooth out spikes in demand and keep gas prices stable.

Another key component of EIP-1559 is the addition of a burning mechanism, which is intended to improve the tokenomics of the network as a whole and control the rate of inflation. Some have argued that the burning mechanism could create deflationary pressure of Ethereum, though this will only be the case that the burned fees exceed the block rewards. This may be possible during future bull markets or periods of high network activity (such as the initial periods of DeFi and NFT mania).

On the other hand, some analysts have criticized the attempt to counterbalance supply, arguing that the increased difficulty of forecasting the total amount of Ethereum over time could lead to market instability.

What Other EIPs Does the London Hard Fork Implement?

How will the Ethereum’s Hard fork impact miners?

The burning mechanism has been met with controversy from the mining community, as it effectively slashes the income made from gas fees by 30%. Combined with the looming threat of obsolescence from the Ethereum 2.0 migration, miners are now facing increased short-term pressure of revenue streams, which is sure to put a squeeze on low-margin operations.

Flexpool launched a campaign against EIP-1559 in early 2021, which was soon joined by several other mining pools. Sparkpool, Ethermine (the two largest Ethereum mining pools with around 24% and 20% of the hash rate respectively), and several other smaller pools also came out against the proposal. Despite the fact that over 50% of the network’s hash rate had come out against the proposal, EIP-1559 so far has largely been activated without a hitch.

What Happens Next for Ethereum?

While the London hard fork does not provide any immediate solutions to the scalability problems that have long plagued the Ethereum network, it lays important groundwork for Ethereum 2.0 and the move towards controlling inflation. Though the burning mechanism is sure to hurt miner income from gas fees, some analysts argue that increased scarcity may have a positive effect on Ethereum’s price, thereby offsetting the losses.

Currently, over 16,800 ETH (roughly $51.3 million) has been permanently removed from the network through burning at a rate of over 4 ETH (roughly $12,000) per minute. The primary source of these burns has been from high transaction volume platforms such as the OpenSea NFT marketplace, Uniswap (UNI), Axie Infinity, and Tether (USDT).

The market has reacted positively to the activation of the London hard fork. Though cryptocurrencies as a whole experienced a bounce back during this week, Ethereum outperformed other major tokens such Bitcoin (BTC) with an impressive rally. Crypto investors rushed to buy Ethereum, and the price of ETH rose from $2,587 on August 3 to $3,088 by August 9, representing an increase of 18.76%. 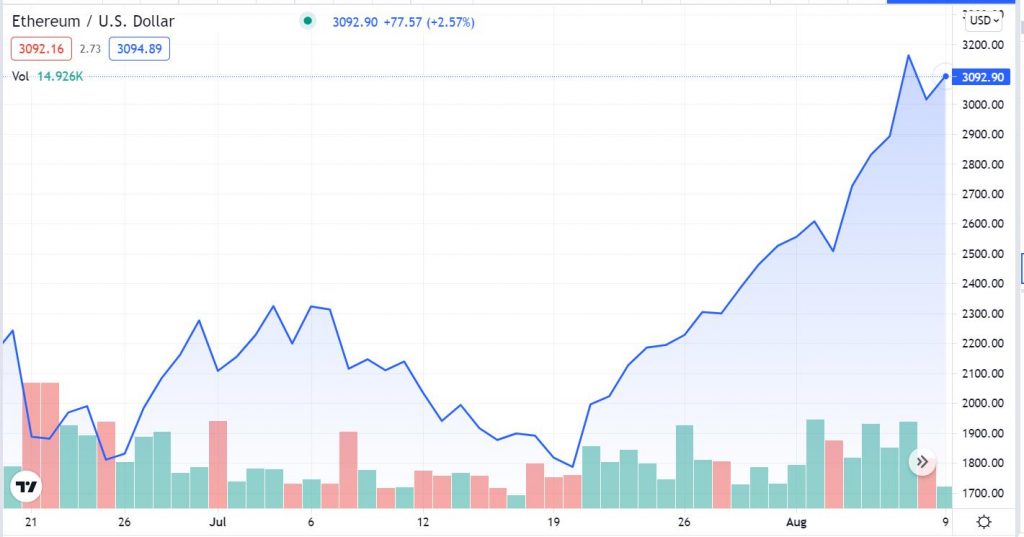 In an interview with Bloomberg, Ethereum co-founder Vitalik Buterin declared the activation of the London hard fork a success and stated that he was now “more confident of the [Ethereum 2.0] merge.” Looking beyond the Ethereum 2.0 migration, the London hard fork’s most critical contribution, the manner in which it has transformed how fees are calculated on the network, is sure to have long-term influence.

The upgrade is also an important step towards realizing Buterin’s vision of developing Ethereum into a highly scalable, energy-efficient network capable of handling up to 100,000 transactions per second. In the long term, more solutions to the gas problem will be needed to maintain Ethereum’s value proposition when compared to highly scalable networks such as Solana (SOL) and Polkadot (DOT).