Ethereum vs Solana vs Cardano vs Polkadot: The Rivals of ETH

Ethereum (ETH), the second-largest cryptocurrency in terms of market capitalization, is the inventor and pioneer of smart contracts. It’s the cryptocurrency to beat when we talk about smart contracts, and some of its major rivalries include Solana (SOL), Cardano (ADA), and Polkadot (DOT).

Ethereum is currently the most widely used ecosystem for non-fungible tokens (NFTs), decentralized finance (DeFi), and other use cases. According to data collated by CryptoRank, the total locked value in DeFi reached $245.5 billion in October 2021, and Ethereum alone accounted for over half at $150 billion. 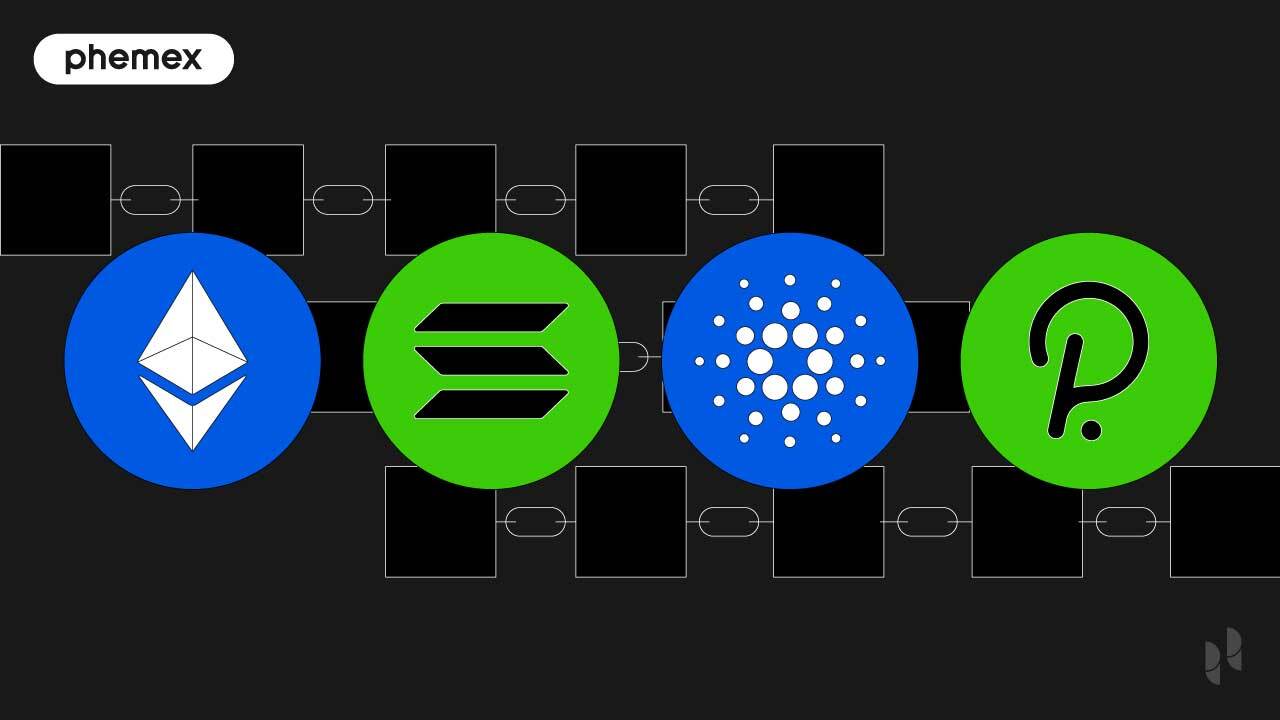 Generally speaking, the crypto community considers those cryptocurrencies with a native third-generation blockchain as “Ethereum Killers” (Bitcoin is deemed the first generation while Ethereum is the second generation). That means cryptocurrencies that are decentralized, secure, compatible with other blockchains, at the same time, enable smart contracts, offer a DApps platform, and scale well for low-cost, fast transactions.

Solana, Cardano, and Polkadot are the top three counterparts in the battle. They’re among the top ten cryptocurrencies in terms of market capitalization. With Ethereum being even more prominent, three of them are seen as challengers or killers as a matter of course.

Growth of Ethereum and Ethereum killers in 2021. (Data source: CoinMarketCap as of December 1, 2021)

Polkadot was founded by Gavin Wood, the former co-founder and CTO of Ethereum, in 2016. Meanwhile, Cardano was founded in 2015 and launched in 2017 by Charles Hoskinson, another co-founder of Ethereum. Both are well-known figures in the crypto world.

Polkadot is an ecosystem of multiple blockchains interacting with one another in a flurry of economic activity. Unlike a standard single-chain blockchain, Polkadot comprises dozens of sub-blockchains featuring programmable building blocks. The project aims to streamline cross-chain interoperability with the overall goal of supporting next-generation DApp development. Polkadot can transfer the data across private, permissioned blockchains, let alone the public, open, permissionless blockchains,

On the other hand, Cardano is an open-source project that can boast a platform developed based on science and peer-reviewed research. This project merges pioneering technologies to provide unique security and sustainability to decentralized applications, systems, and societies. Cardano uses its own Ouroboros Proof of Stake (PoS) protocol, which is designed to sustain the network’s security while maintaining a high degree of scalability. The Ouroboros system chooses participants (in this case, stake pools) to validate blocks and receive ADA, its native token, as a reward based on the amount of stake they control in the pool.

Can DOT and ADA replace ETH?

Regarding their comparison, the die-hard fans from both sides believe that each will eventually replace Ethereum. However, coming from a neutral and objective perspective, we can hardly justify which one will be the next Ethereum as both projects are still in the starting phase of their lifecycle.

The Polkadot ecosystem charges a much lower transaction fee. As DeFi advances, the market’s interest in DOT has been rising. Meanwhile, Cardano works on the interoperability between chains and also the confidentiality issue, which, if successfully tackled, will allow banks and institutions to use the blockchain technology. Cardano is set to host an unlimited number of projects. Conversely, Polkadot has an initial limit of 100 parachains, which is theoretically a measure to maintain the platform’s stability. At some points, Cardano requires votes prior to accepting additional projects.

In addition, Cardano’s market capitalization is greater than Polkadot’s, which is close to two times the latter. Cardano also has a lower risk with less strict penalties for investors than Polkadot.

Polkadot vs Solana vs Cardano

In the meantime, we cannot deny Solana, another potential Ethereum killer. Created by a team of Qualcomm veterans, Solana strives to be a solution to many of Ethereum’s most critical issues, such as slow transaction times, high gas fees, and poor scalability. It claims to be able to process up to 65,000 transactions per second (TPS) on a single global state, which is a significant upgrade to Ethereum’s 15 TPS.

Solana achieves high speeds through its unique Proof-of-History (PoH) consensus, a decentralized timestamp that keeps track of the order of events. Through PoH, Solana can execute smart contracts securely and concurrently, which is relatively advantageous to Ethereum’s Proof-of-Work (PoW) mechanism.

Find out more about Solana vs Cardano.

Which projects can replace Ethereum?

Now that we have a brief understanding of three Ethereum killers, let’s deep dive into them and see how they fare against each other and whether they have the opportunity to supersede Ethereum. For this comparison, the criteria that we will look upon are:

Solana is the largest of the three cryptocurrencies by market capitalization. It’s designed to support up to 50,000 transactions per second (TPS) with its unique PoH consensus. This is remarkably higher than Ethereum 1.0’s 30 TPS. However, cryptocurrencies have their own trilemma as well. That is, they cannot achieve decentralization, efficiency, and security all at once. Developers can only choose two.

First, there are significant hardware requirements to be a Solana validator. It should be noted that the easier it is to be a validator, the more decentralized the ecosystem is. Also, the more validators a cryptocurrency has, the more secure it is. Yet, Solana validators need to meet stricter requirements in terms of hardware, like 12 CPU cores (or more) with a clock speed of 2.8GHz, 128GB of RAM, and 1TB SSD to store the Ledger. Compare this to Ethereum 2.0, which will only require a 4th generation i7 processor, 8GB of RAM, and a 0.1TB SSD. This also means that setting up a Solana validator is both expensive and challenging.

Third, Solana’s team has put so much effort into growing its community. SOL’s price went from just under $3 per coin at the onset of 2021 to a high of more than $250 per coin in September 2021, which justifies the team’s community-building effort.

Currently, Cardano can support up to 7 TPS, and this ceiling can be lifted to up to 50 TPS. This is similar to Ethereum’s 45 TPS. The project team hopes to boost the TPS with an in-development upgrade dubbed Hydra that will help it hit at least 2500 TPS. With regard to the trilemma, Cardano chose decentralization over others.

Compared to Solana and Polkadot, Cardano allows for the most decentralization. The Ouroboros consensus is not only easy and cheap to run but also very open. Cardano has low hardware requirements for validators as well, which is similar to Ethereum 2.0. To become Cardano validators, you only need to have a 2-core chip, 8GB of RAM, and 30GB of SSD.

Next, Cardano has managed to create a strong community. It has one of the largest and most dedicated crypto communities that helped propel Cardano to a top three crypto by market capitalization before. The community is largely maintained by non-stop promises and anticipatory updates from a charismatic co-founder, Charles Hoskinson.

Meanwhile, on performance, Cardano is similar to Ethereum 1.0 in that it does not scale well. The moment usage loads up, the system will face issues similar to what Ethereum has been experiencing, such as long wait times and expensive transaction fees. This is the cost of being more decentralized.

Lastly, to reassure the community of scaling problems, the project team relies on the tried-and-true tactic of promising better. Hoskinson is used to creating hundreds of “Update” and “AMA” videos to keep the promise swinging.

Polkadot is designed to handle large transaction volumes. The Relay Chain is already able to handle 1,000 TPS. With parachains that can be up to 100, the ecosystem’s max TPS can reach 1,000,000. In the meantime, Ethereum 2.0 is only targeting a maximum TPS of 100,000.

Polkadot’s high TPS does not exist for free. The project opted for a centralized approach. For instance, Polkadot also has hefty hardware requirements for validators, though not as hefty as Solana’s. Validators are required to have 160GB of SSD and 64GB of RAM.

Plus, Polkadot has a smaller community than Solana or Cardano in terms of popularity and marketing. This might be because Polkadot’s sharded infrastructure is hard to understand and possibly indicates different priorities for each project.

Ethereum vs Solana vs Cardano vs Polkadot

Last but not least, there’s a need to compare Ethereum with Solana, Cardano, and Polkadot, as the latter is termed Ethereum killers. Though Ethereum is by far the second-largest cryptocurrency in the market, it has several drawbacks that users and developers have been complaining about. For example, while Ether tokens are divisible up to 18 decimal places, allowing for quintillion fractional units, the high gas fees have taken away the advantage of precise micro-transactions in practice. In some cases, the gas fees can cost users hundreds of dollars.

While Ethereum is being upgraded to solve the low speed of transactions, the energy-intensive nature of mining, the reduction in gas fees, and other technical changes are yet to be seen despite more than a million Ether having been burned since the London Hard Fork.

Still, there are more projects on Ethereum than all three Ethereum killers combined.

The number of projects on Ethereum and its counterparts. (Source: Respective blockchain repositories, as of November 17, 2021)

Analysts generally believe that Ethereum will succeed, yet its rivalries will slowly occupy its market shares. Also, Solana, Cardano, and Polkadot are only three of the hundreds of blockchain projects out there that pledge to outperform Ethereum.

Moreover, it’s undeniable that these cryptos have the advantage of learning from Ethereum’s mistakes. In fact, the Solana chief once said, “Ethereum cannot be killed; it’s impossible.” Plus, the Ethereum 2.0 is dedicated to boosting the speed of transactions by over 7,000-fold to 100,000 TPS, leading to a less energy-intensive mining process.

This upgrade will likely happen in 2022. However, it remains to be seen whether Ethereum will be able to hold onto its crown or gradually run out of steam and time.