Solana (SOL) vs Cardano (ADA): Which is the Better Crypto?

When Ethereum (ETH) popularized smart contract technology in the blockchain world, there was no shortage of enthusiasm and praise. However, Ethereum’s slow speed of transaction processing and high fees still plague the network.

At that time, many blockchain projects started pursuing the goal of enabling smart contracts on a much more efficient network. The two largest and most prominent of these projects are Solana (SOL) and Cardano (ADA).

Both platforms have become formidable competitors to Ethereum in the area of smart contract-based decentralized app (DApp) development. 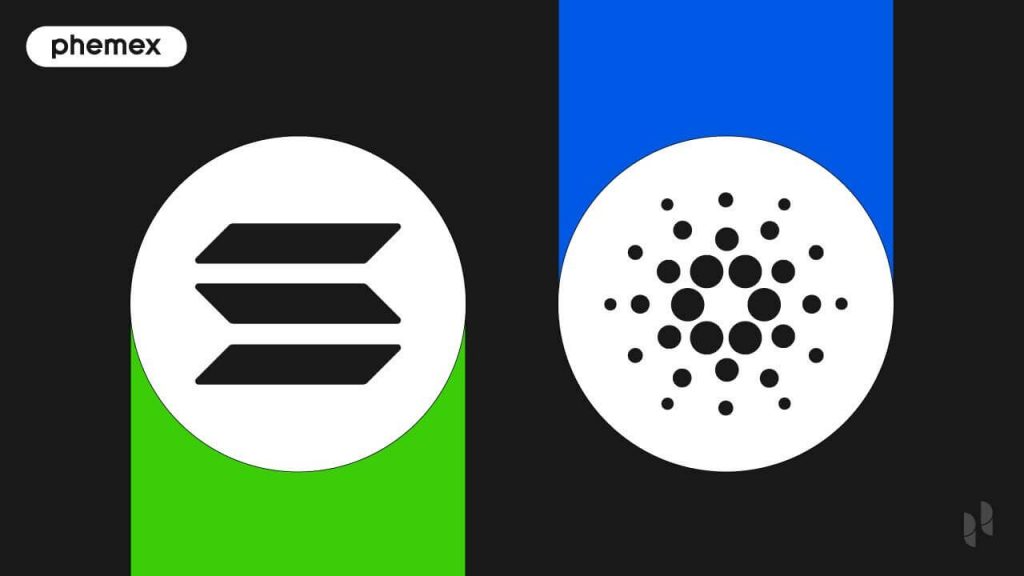 What Is Solana (SOL)?

Solana is a smart contract-focused blockchain that enjoys some of the lowest fees and highest speeds in the industry. Solana’s technical setup includes the functionality to run multiple smart contracts at the same time. This helps the platform achieve its technically superior features.

Solana was launched with a key goal of offering a faster and cheaper smart contract platform compared to Ethereum. Now it is home to a thriving variety of more than 350 DApps. Solana’s most popular apps are the decentralized finance (DeFi) platforms Raydium, Orca, and Saber, along with marketplaces Magic Eden and Solanart.

Solana is the 5th largest crypto platform, with a market cap of nearly $59 billion.

What Is Cardano (ADA)?

Cardano is a PoS-based blockchain which, similar to Solana, focuses on providing a smart contract platform that is low-fee, fast, and scalable. Cardano was launched in 2017, and was one of the earliest platforms aiming to offer an efficient alternative to Ethereum’s slow and expensive network.

A distinct feature of Cardano is its two-layer model. Unlike other blockchains, Cardano splits its functionality into two distinct layers. The first layer is the underlying smart contract layer, where all the computations to execute smart contracts are carried out. Cardano calls it the computational layer. The second layer is the settlement layer, where all the crypto asset transfers happen.

Despite being launched three years earlier than Solana, Cardano has been much slower at developing its smart contract functionality. It was only in September 2021 that the platform announced full support for smart contracts.

As such, its DApp and DeFi projects are only now starting to make their name in the blockchain community. Some of the more prominent earlier projects on Cardano include the DeFi platforms Ergo and Meld.

Although Cardano introduced its smart contract functionality in September, ADA has been among the most popular cryptocurrencies among investors since early 2021. Cardano, by now, is the 6th largest crypto platform, right behind Solana, with a market cap of $52 billion.

What Are the Similarities Between Solana and Cardano?

What Are the Differences Between Solana and Cardano?

Although Solana and Cardano both have the goal of enabling smart contracts on an efficient platform, they have more differences than commonalities.

The block validation method is among the most fundamental technical properties of any blockchain. Solana and Cardano have somewhat different ways of carrying out this validation.

While Solana uses the PoH method, where the essence of the validation procedure hinges on the unique timestamping of blocks, Cardano uses the PoS consensus method. The central idea of PoS is to allocate block verification rights to validator nodes based on the amount of cryptocurrency held by the node on the platform. The more crypto assets you hold, the higher your chance of getting the rights to validate the next block is.

Decentralization Level of Solana and Cardano

The concept of decentralization holds nearly sacred value to many blockchain enthusiasts. A good proportion of these users would be reluctant to use platforms perceived as centralized, or even those with relatively low decentralization levels.

The number of validator nodes on Cardano and Solana is around 3,000 and 1,000, respectively. By this measure, Cardano may be considered a somewhat more decentralized platform than Solana.

Although both blockchains have vastly lower fees than Ethereum, there are some significant differences between them on this metric. Solana features some of the lowest fees among the large-cap platforms. An average transaction on the blockchain is around $0.00025 (2.5 cents for 100 average transactions).

Cardano’s fees have increased considerably over recent months as the platform enabled its smart contract functionality. Currently, the average transaction on Cardano is $0.35, though this figure may change in the future as DApp projects are introduced in greater numbers.

Based on the current average fees, Solana is 1.400 times cheaper to transact on than Cardano.

Solana’s current maximum technical capacity is 65,000 transactions per second (TPS). As the blockchain is still far behind Ethereum by network load, it typically processes around 1,000 to 2,000 TPS, far lower than its max capacity.

Cardano’s speed, in comparison, is much more modest, at around 250 TPS, which is still considerably faster than Ethereum’s lethargic speed of 15 TPS. Cardano currently processes around 3 TPS on average, about 80 times less than its max capacity.

As such, Solana is around 260 times faster than Cardano, as measured by the maximum TPS capacity. On a typical day, Solana processes approximately 500 times more TPS than Cardano.

Solana and Cardano: Which is the better Blockchain?

2021 Price Performance and Return on Investment

Both Solana and Cardano have been solid performers in the cryptocurrency market this year, but Solana’s performance and return on investment (ROI) have been well above Cardano’s.

Summary of prices and ROIs of SOL and ADA

ADA still gained more this year than the overall cryptocurrency market, which is currently around 220% up from the beginning of 2021. The table below summarizes the prices and ROIs of both blockchains and the overall crypto market.

What Is the Future for Solana and Cardano?

Both blockchains are among the top 10 crypto platforms. Solana has significantly outperformed Cardano this year in the crypto market, but Cardano’s launch of smart contract functionality in September may change the growth dynamics between them.

As an early DApp wave is building up on Cardano, the platform may catch up on Solana and become next year’s star performer.

However, both of these networks and investors should take into account one important planned market development next year – Ethereum’s upgrade to a much more efficient and faster PoS network, Ethereum 2.0.

When the upgrade is finalized around Q2 2022 per the Ethereum Foundation’s estimates, the new PoS platform will be capable of processing up to 100,000 TPS.

This is faster than Solana’s max speed capacity of 65,000 TPS and around 400 times faster than Cardano’s max of 250 TPS. Transaction fees are also widely expected to fall significantly after the upgrade.

If the technical projections made by Ethereum are realized, many blockchain platforms whose key value proposition rests on “being faster and cheaper than Ethereum” may start struggling.

Solana and Cardano are very unlikely to fold even if Ethereum 2.0 becomes a massive success. However, their current impressive growth might be hindered.

Solana and Cardano are among the top 10 leading blockchain platforms in the world. Both of these networks share an important commonality – they are focused on smart contract and DApp technologies, and offer much faster and cheaper platforms for this purpose compared to Ethereum.

Despite a number of similarities, Solana and Cardano have significant differences. They are based on different block validation models and have a somewhat different degree of decentralization.

Moreover, Solana is a much faster and cheaper network compared to Cardano. It has also achieved a markedly better market performance this year than the latter.

Both blockchains are widely expected to continue growing. However, Ethereum’s upgrade to a more efficient version by Q2 next year may pose additional growth challenges to both platforms. A lot will depend on how both of them respond to this anticipated tectonic market development.