Polkadot vs. Chainlink vs. Cosmos: Which Is The Best To Invest In?

Polkadot (DOT), Chainlink (LINK), and Cosmos (ATOM) are multi-billion dollar cryptos that brought new technology to the industry forefront. The main difference between Polkadot, Chainlink, and Cosmos is the type of blockchain. There are two types of crypto blockchains: layer-1s and layer-2s. Layer-1s are native blockchains that are powered by Proof of Work (PoW) or Proof of Stake (PoS) consensus mechanisms. This includes coins such as Bitcoin (BTC) and Ethereum (ETH). 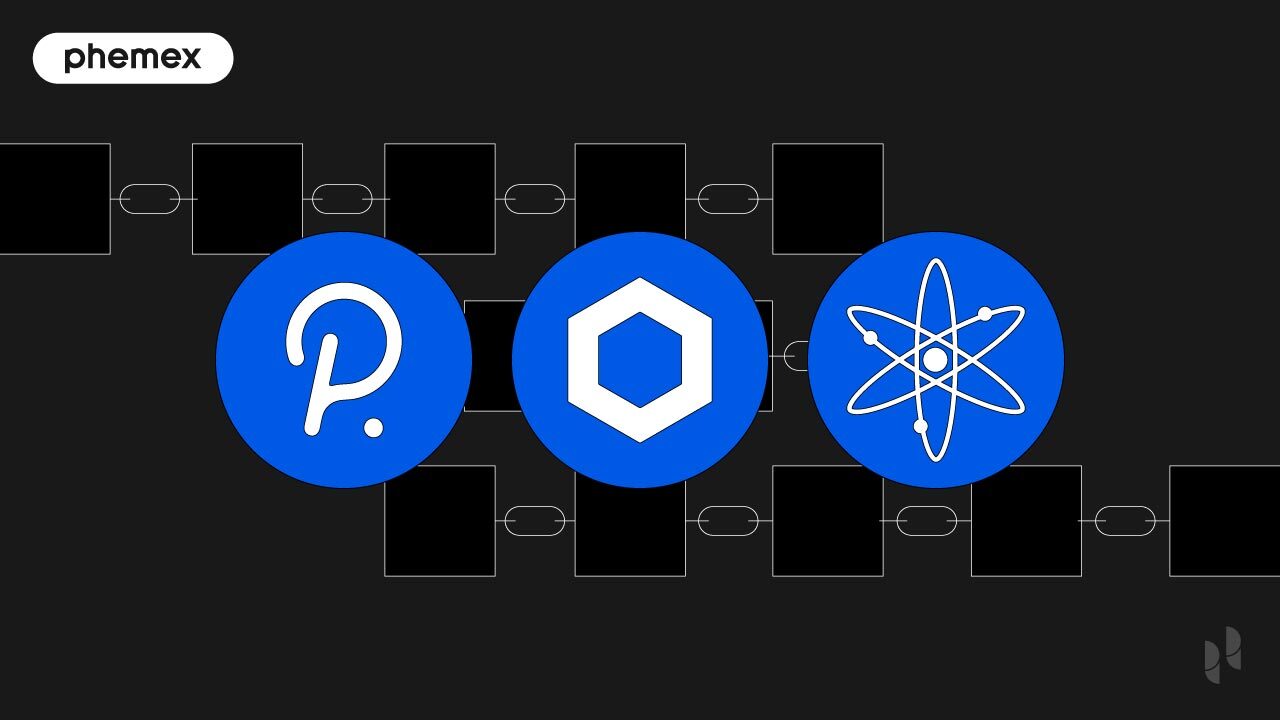 All three coins have proven bullish during the last crypto bull run. The YoY performance for Polkadot vs. Chainlink vs. Cosmos is the following:

Polkadot saw the highest price appreciation on a yearly basis. However, Cosmos received more technological adoption and leads the way in projects being developed on GitHub.

Chainlink has also seen an increase in TVL (total value locked) over its network to over $75B and continues to grow, despite the LINK token underperforming compared to DOT and ATOM.

What is Polkadot (DOT)?

Polkadot is a layer-1 blockchain that runs on the principle of “parachains.” These are blockchains that run on top of the main Polkadot chain called the “Relay Chain.” For comparison, Ethereum allows unlimited amounts of ERC-20 tokens to deploy on its main chain. On Polkadot, a parachain slot is reserved for an exclusive set of projects. 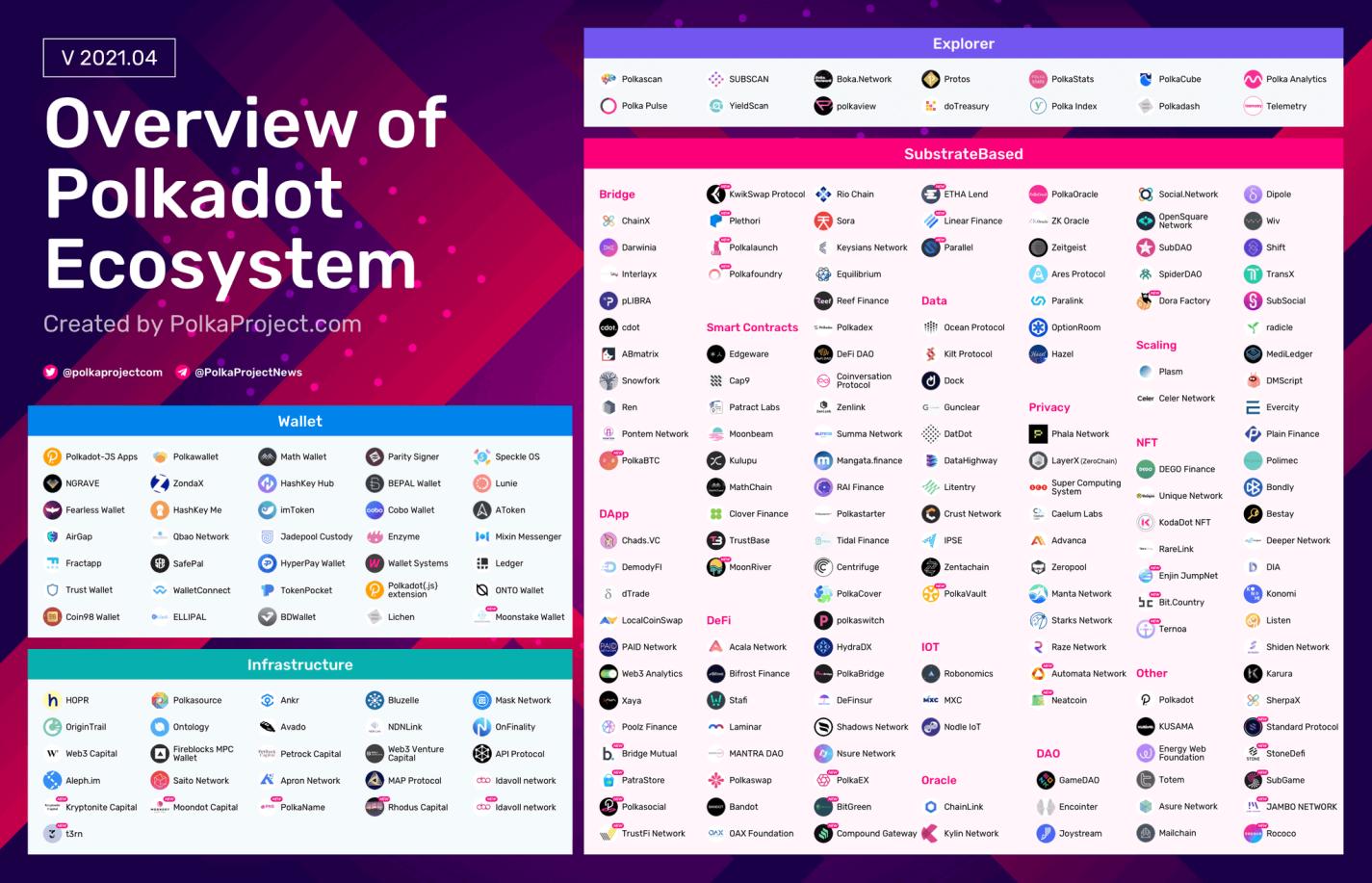 The main distinction between parachains on Polkadot and ERC-20 tokens is that each parachain on the Polkadot network has to set their own rules, block producers, and state machines. Parachains can also set their own consensus algorithm and individual transaction structure, taxes, and more.

The bullish case for Polkadot is that parachain slots are limited and only high-value projects can obtain them (ex. Reef Finance). There are so-called “parachain auctions” where developers can bid to reserve a parachain on the network.

During auctions, the price of the native Polkadot coin DOT has historically appreciated. This is because to get a parachain, developers have to purchase large numbers of DOT and lock them up for a certain amount of time. At the moment, there are only 100 parachain slots and this number is expected to shrink in the future.

What is Chainlink (LINK)?

Chainlink is a node marketplace developed in 2014 that was three years in the making and launched in 2017 when it held an ICO (Initial Coin Offering). Chainlink was founded by Sergey Nazarov. The Chainlink mainnet went live in 2019.

Chainlink aims to connect blockchain data to real-world data using a network of oracles that transmit data between smart contracts and the real world. Blockchains such as Ethereum cannot communicate with the outside world and receive data such as price feeds, weather data, payment modes, and so on. 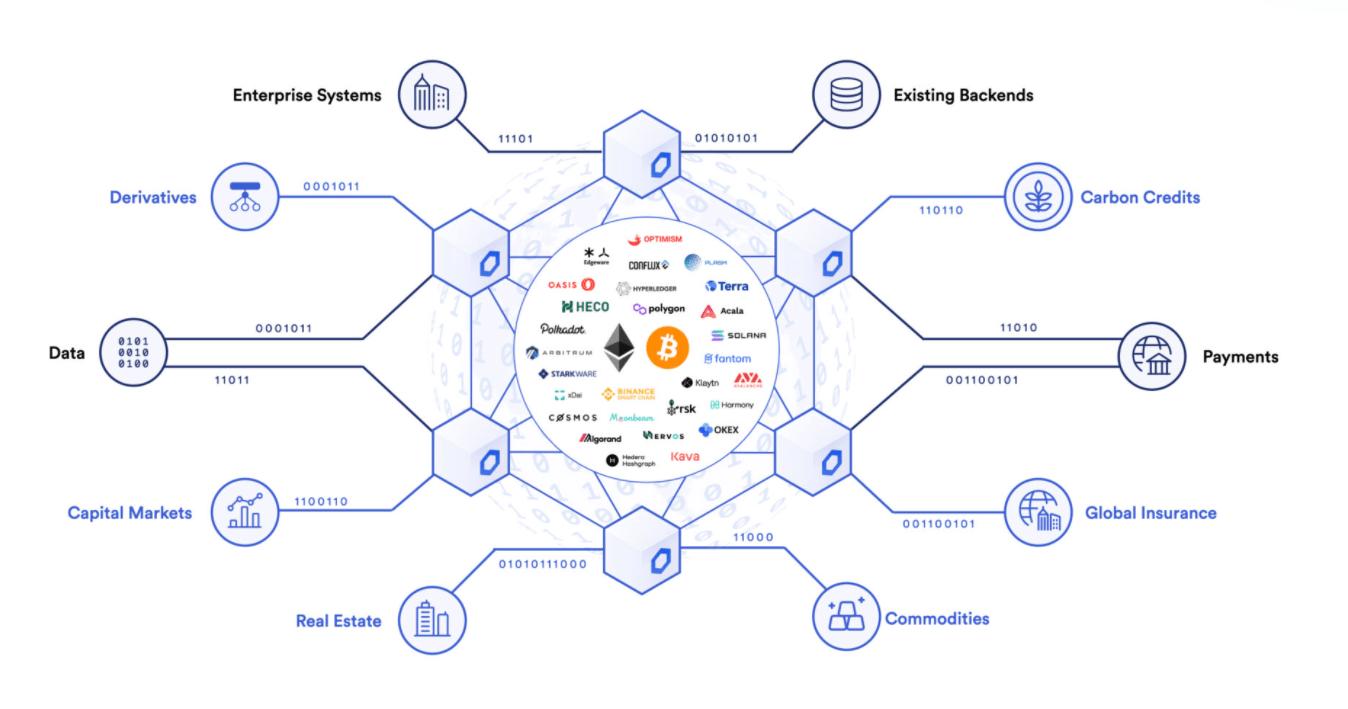 It is important to note that Chainlink is a centralized marketplace (https://market.link/) for nodes and node operators that developers can use, and this marketplace is not built on top of the token — the LINK token is only used for payments and governance.

If developers need to use Chainlink oracles, they use the token to pay the node operators, but the oracle marketplace itself is hosted on centralized servers like AWS (Amazon Web Services) or other reliable servers. The marketplace is comprised of thousands of oracles.

For comparison, Polkadot parachains run on the Polkadot blockchain. Anyone can run a node on the Chainlink marketplace and developers have to carefully choose which oracles they are using for security purposes. An oracle could act in a malicious manner if it is not reputable.

The main criticism Chainlink received from the start was that it could use ETH to accept payments instead of the native LINK token, but the team decided to launch their own token and use it exclusively for oracle payments within the Chainlink marketplace.

What is Cosmos (ATOM)?

Cosmos is an open-source layer-1 blockchain that stands out by offering a development SDK for blockchain developers who want to develop their own layer-1 blockchains from the ground up. Dubbed “The Internet of Blockchains,” Cosmos provided the framework code that many top 20 blockchain networks were built on.

In the past, layer-1 protocols were difficult to develop and only top cryptographers and mathematicians could develop a layer-1 crypto on their own. The Cosmos SDK made it easier for developers using Golang language to create their layer-1 blockchain similar to Bitcoin or Ethereum. 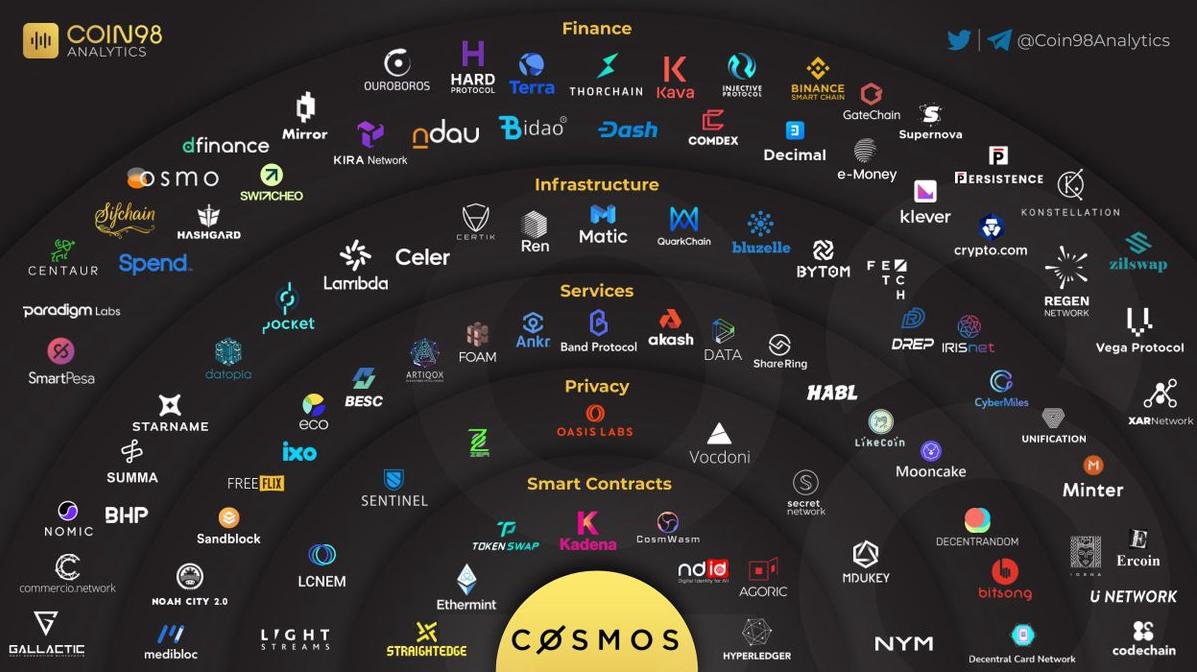 The Cosmos SDK was used by billion-dollar projects such as BSC, Matic, Dash, Terra Luna, CRO, Injective Protocol, Oasis Protocol, Zcash, Kadena smart contracts, Sentinel, Ankr, and more. The SDK was also used for widely-popular crypto wallets such as Exodus and Trust Wallet. The Cosmos GitHub has some of the highest developer activity in the crypto industry.

The ATOM token is the Cosmos ecosystem’s native token, but the main difference is that unlike Polkadot parachains, Cosmos-built blockchains run on their own infrastructure and they are independent from ATOM (the native token of Cosmos). Developers have to secure their own blockchain, add validators, and develop their own block explorers.

Polkadot vs. Chainlink vs. Cosmos: Cross-Chain

The main thing all three platforms have in common is that they are cross-chain compatible and/or blockchain agnostic. Polkadot tokens can be bridged with other tokens such as Ethereum ERC-20 tokens and their smart contracts can interact with each other.

Likewise, Cosmos tokens can communicate with other Cosmos-built blockchains and they are compatible with the EVM (Ethereum Virtual Machine), which means layer-2 tokens can be built on these blockchains using Solidity code. Chainlink is blockchain-agnostic and the nodes can operate and send data to all popular blockchains.

Polkadot vs. Cosmos vs. Chainlink: Is There A Better Investment?

All of these coins are more volatile than Bitcoin and Ether. Polkadot gave the highest returns this year and this is partially due to Gavin Wood’s reputation in the crypto sphere as the man behind Solidity, the smart contract programming language that hundreds of thousands of tokens are built on.

Cosmos and Chainlink are likely to appreciate in price as more blockchains are built on the Cosmos network and more TVL is locked in the Chainlink node network.

Polkadot, Chainlink, and Cosmos are some of the best-performing coins of the last three years. The differences between these cryptos are difficult to grasp, as there are nuances in the technological foundations. For one, Polkadot and Cosmos coins run on native blockchains, whereas Chainlink is a token built on Ethereum.

Cosmos holds a technological edge over Polkadot and Chainlink because it provides an SDK (software development kit) to build layer-1 blockchains. It is more complex to build a layer-1 blockchain compared to an ERC-20 token, but Cosmos developers found a way to simplify the layer-1 development process. The Cosmos SDK has been implemented by some of the world’s largest blockchains that exceed the market cap of the ATOM coin.

Polkadot was the best performer of the year with a 637% return, outperforming both Cosmos and Chainlink. However, many of the world’s largest blockchains are built using Cosmos development tools and Chainlink secures over $75B in DeFi assets across decentralized exchanges and tokens. It is up to individual investors to decide which investment will be the most profitable over the long term.