The decentralized finance (DeFi) space is blowing up and new blockchain technology emerges every day. There are over 350,000 tokens built on Ethereum alone, and one thing all developers agree on is that it should be simplified for greater adoption. DApps are complex interfaces and only technically-savvy users can use them. 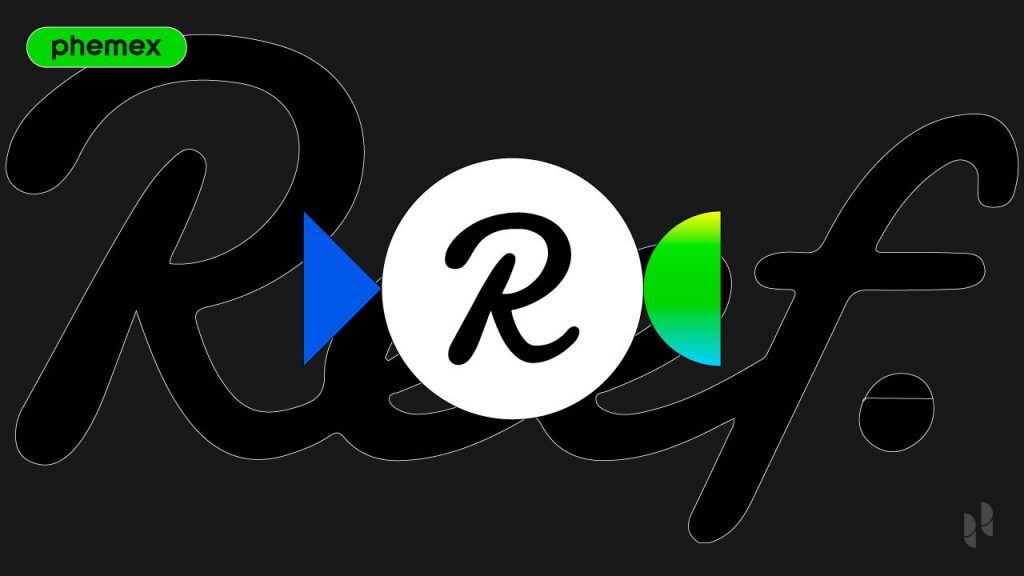 Reef Finance (REEF) is a project built on Polkadot that attempts to simplify this. Reef is the first cross-chain crypto operating system in DeFi that facilitates the transfer of liquidity and tokens between different blockchains, including centralized exchanges (CEXs) and decentralized exchanges (DEXs). The Reef ecosystem uses the Reef token as its native currency. 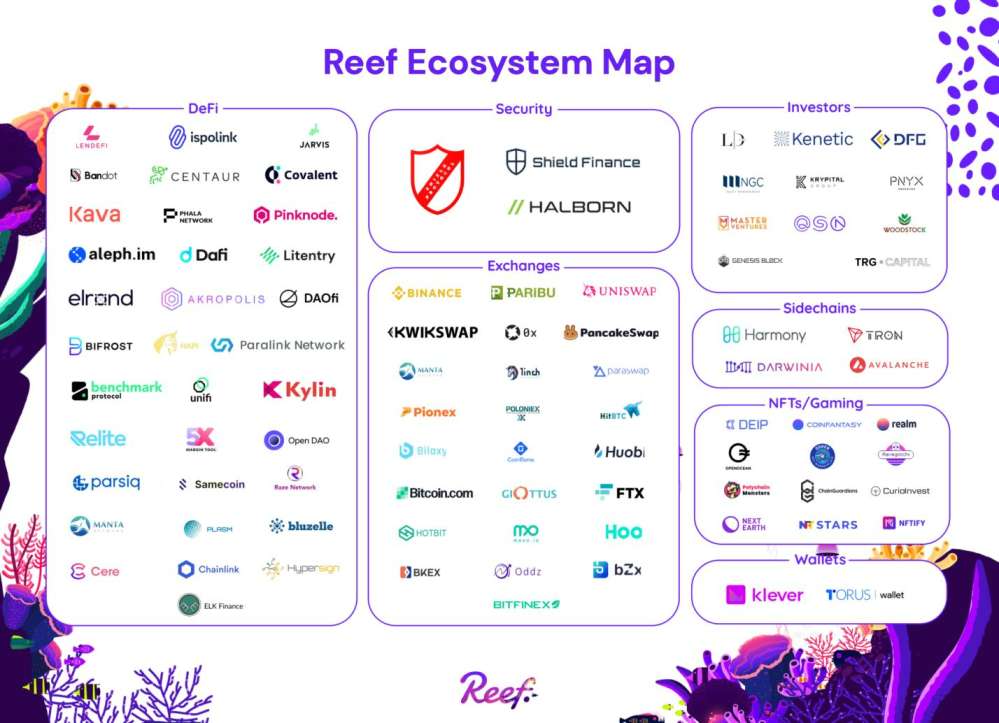 How Does Reef Finance Solve The Blockchain Problem?

What is The Main Blockchain Problem?

The issue is that liquidity and tokens built on native blockchains are stuck in those respective blockchains. For example, if you want to transfer USDT from one decentralized blockchain such as Ethereum to another such as Avalanche, you must go through a CEX. Reef aims to change that by creating an intermediary platform that aggregates tokens and liquidity among different blockchains.

What Does Reef Do?

The idea behind Reef is to simplify DeFi and make it available to everyone by connecting blockchains in one platform. The founder, Denko Mancheski, claims that Reef will make DeFi more accessible by allowing people to earn money from trading tokens built on different blockchains without worrying about convertibility.

What advantages does Reef Finance Have?

The Reef platform is compatible with major DeFi wallets such as MetaMask, WalletConnect, Torus, and WalletLink. Once users connect their wallet, they have a list of all assets that belong to them and their current valuation. They can also convert them to the Reef token and/or transfer them to a different blockchain. 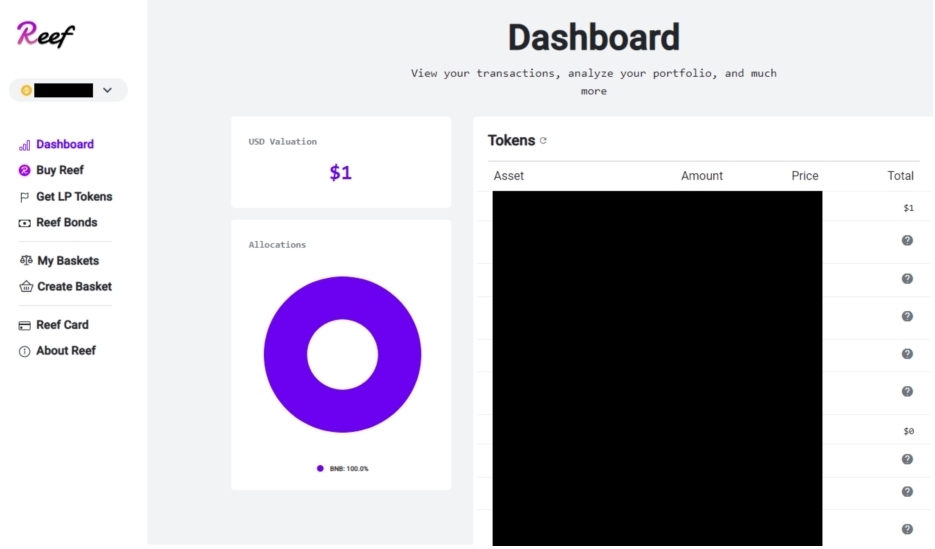 Reef stands out by offering compatibility between DEXs and CEXs. The platform also converts liquidity between decentralized blockchains. Reef’s platform streamlines the process by converting these assets to the Reef token, with minimal fees in the process.

Reef announced a Series-A funding round of $3.9M in September 2020 and launched on December 29th, 2020. It was the largest series funding for any Polkadot-based project and backed by companies such as NGC Ventures, AU21 Capital, QCP Capita, Kenetic Capital, Amplifi, and the Krypital Group.

Polkadot is one of Ethereum’s main competitors and it aims to address the ERC network’s biggest pitfalls such as slow speeds and high transaction costs. Polkadot was built by Gavin Wood, an Ethereum co-founder based in Berlin, Germany. It is currently the 9th largest cryptocurrency with a $30B market cap, trading at $30.

Polkadot functions on the principle of “parachains” that comprise the Polkadot blockchain. Few projects can have a parachain slot on Polkadot, and they are obtained in a process called a “parachain auction.” Reef is built on Polkadot and has a parachain that enjoys benefits such as Polkadot’s proof-of-stake consensus, EVM compatibility, scalability, libp2p networking, and world-class security.

Reef’s users and developers experience low-fee transactions and compatibility with EVM, making it easy to port their projects from ERC-20 to the REEF-20 ecosystem. The transaction speeds are also faster because parachains operate independently in the Polkadot ecosystem, minimizing network congestion even at peak times.

The Reef platform is fully decentralized and made of different components that work with each other. Moreover, it’s non-custodial which means the funds transferred to the Reef ecosystem only belong to the user and the developers have no access to their private keys or funds.

What are Reef Smart Contracts?

Reef Finance is fully smart-contract compatible and developers can write custom REEF-20 tokens on the platform using Solidity. Solidity is also used on Ethereum and the code is identical, meaning ERC-20 projects can immediately be ported over to REEF-20. Reef is compatible with Solidity 0.6 projects and up.

Developers have the option to port over their projects from Polkadot, BSC, Avalanche, and Cosmos. A REEF-20 token can be deployed in a few clicks. The DeFi tooling on Reef’s chain is different to other blockchains because Reef is built on Polkadot. Developers who plan to deploy on REEF-20 need to replace a few key tools.

What is the Reef Token?

The Reef token is the native currency of the REEF-chain and it’s used for liquidity exchange, transaction fees and governance. The Reef token has a circulating supply of 16B tokens and a maximum supply of 20B tokens. Most Reef tokens are traded on decentralized exchanges such as Ethereum and BSC.

The main purpose of the Reef token is to provide liquidity transfers between different blockchains, and this can be done on their platform. Moreover, holders can participate in the governance structure of the network and vote on issues such as features and partnerships.

Large Reef token holders can participate in maintaining the network. They are called “Network Collaborators” and they create new blocks on the Polkadot Ledger. Their APR varies by the size of the tokens being locked and the timeframe. 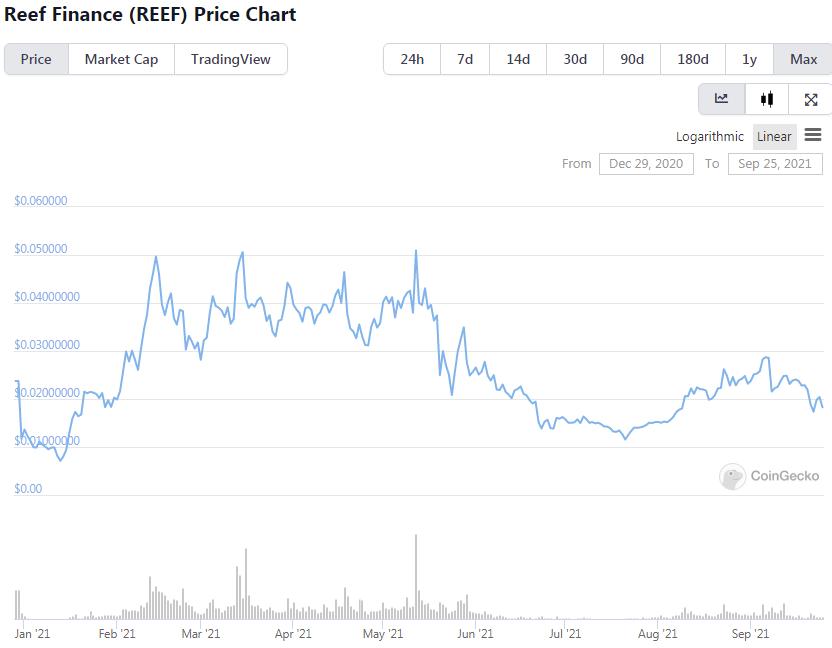 Early investors benefited the most because the token had a private sale in September 2020 when 4.2 billion Reef (20% of the supply) were sold privately at an average cost of $0.00095. When the token launched, it reached $0.0279 on opening day, which gave private investors a 27× return on launch day.

Reef was one of the most hyped launches of the year and had the attention of the entire crypto industry. Despite the successful launch, the price quickly dipped to $0.02 from the original high and fluctuated between $0.01-0.02 on average.

When the crypto bull market really took swing in March 2021, Reef’s price shot up to an all-time-high of $0.0574. The coin is currently down nearly 70% from its all-time-high.

What is the Future for Reef Finance?

Reef is only 9 months into its launch and it’s too early to determine whether or not the project will be successful long-term. Its future success will mostly depend on developer adoption and whether or not developers choose to build on the REEF-20 chain.

One argument against Reef is that most people are loyal to their chain of choice and rarely have the need to go cross-chain. For example, Ethereum users prefer the ERC-20 ecosystem and are less likely to switch to Solana or BSC. DeFi is still in its infant stages and it will need larger-scale adoption before cross-chain services like Reef are used commonly.

Reef has projects coming down the pipeline such as NFT baskets and a mobile app, scheduled to release in Q3 2021. For the final quarter of 2021, they plan to open new Reef farms and carry out additional security audits.

Reef Finance has introduced new features to the DeFi landscape and faces little competition in the cross-chain space. However, its future outlook will depend on how the crypto market responds to the product. If Reef ends up with a large user base, early investors will benefit greatly from holding this coin.

Investors who bet on DeFi becoming big over the next 10 years might find investing in Reef lucrative as it’s positioned to become one of the key intermediary services between different blockchain networks. They can also participate in the governance system of Reef and decide on new features.

← What is Crypto Trading Journal and Why You Need One
What is and How to Trade on a Hammer Candlestick? →
About