What is Chainlink (LINK)? If future projections from market analysts are anything to go by, Chainlink is expected to be a worthwhile investment for many in the crypto or blockchain industry and beyond. Not only does the project have financial upside potential for its investors, but the platform is also enabling the adoption of blockchain technology at a large scale thanks to its capacity to link off-chain data to on-chain smart contracts.

Chainlink works to expand the capacity of these smart contracts within and without the blockchain through a protocol that enables them to access real-world data to execute a variety of programs and applications. But first, before exploring what “Chainlink” is, let us revisit how smart contracts operate.

A good example of how a smart contract works is an escrow service that essentially works to solve the lack of trust between a seller and a buyer. In such a case, a smart contract replaces the escrow intermediary by ensuring that funds from the buyer are released to the seller as long as the delivery of the product is achieved.  The smart contract automatically takes in input data from both the seller and buyer to determine whether the pre-conditions for execution are met.

However, despite their incredible capacity to facilitate transactions autonomously between two parties without the need for a mediator, smart contracts are limited in that they can only execute operations within the bounds of a blockchain.

If a smart contract is to execute agreements beyond the blockchain, i.e. off-chain, the off-chain data in question must be transformed into an on-chain format. This is where Chainlink comes into play.

The Chainlink network consists of nodes that provide data and information from off-chain sources. These nodes are rewarded for their work with LINK token payments. Essentially, the Chainlink network acts as an oracle that provides smart contracts with access to real-world data without sacrificing the security and reliability inherently associated with blockchain technology. With this process, Chainlink hopes to make it easier for market data and software APIs, banks, retail payment systems, and off-chain technologies to connect to smart contracts on decentralized blockchain networks.

What are Chainlink Oracles?

A Chainlink oracle is a software that acts as an intermediary translating on-chain data to an off-chain format and vice versa. By providing inputs and outputs of data for smart contracts, Chainlink oracles act as ‘middleware’ that enable smart contracts to be useful outside the bounds of blockchain networks.

As a decentralized network, Chainlink doesn’t just gather its data from one source. The entire network is made of interconnected computers (also called nodes) that use the Chainlink oracle to gather data from different sources. To achieve this, Chainlink has partnered with a company called Oracle (a famous database management software provider) to provide developers and node operators  an easy way of monetizing the data they gather from different sources.

Together, these three sub-contracts provide an extra layer of security and reliability for every source of information.

The Chainlink Reputation Contract checks for the reputation, authenticity, and performance history of the Oracle provider (the node providing data on the network).

The Chainlink Order-Matching Contract delivers the request for information to Chainlink nodes and selects the nodes that will bid to fulfill the task of providing Oracles.

Once all the nodes deliver the requested data, the Chainlink Aggregating Contract validates and reconciles it all for accuracy.

When nodes receive a request for information from the smart contract, they can translate that request into its off-chain equivalent using Chainlink Core, a software designed to translate on-chain requests to an off-chain programming language.

Every smart contract requesting off-chain information pays Chainlink node operators with the LINK token. Since the entire operation is autonomous and decentralized, node operators get to set the price for the information requested based on current supply and demand conditions of the market.

In addition to its use as payment for node operators, the LINK token is also used for staking on the Chainlink network. To demonstrate their commitment to the network, node operators are required to stake LINK. Staking also incentivizes a higher standard of service as node operators are taxed if they deliver poor services.

Also, node operators with more LINK tokens staked have a higher reputation on the network therefore increasing the likelihood of being selected to provide data and earn more LINK tokens.

Is Chainlink a Good Investment?

Given the many positive projections for Chainlink’s adoption rate along with its current partnerships, most market analysts agree that investing in this project is likely to become highly profitable.  Unlike most blockchain projects, whose value is based on speculation, Chainlink identifies and solves a problem with real-world applications. That is why the platform has attracted partnerships with prominent entities such as Google – Chainlink Partnership in June 2019.

This partnership intends to make it easier for developers to build technologies with access to cloud data while hosting such data on the blockchain using Chainlink’s smart contracts. Such a prominent partnership is a significant step forward towards cementing a strong reputation for Chalink and its token.

According to a statement from Google, “adoption of blockchain protocols and technologies can be accelerated by integrating with modern internet sources and public cloud services”.

Apart from Google, other major players in the technology space that have partnered with Chainlink include  Hdac Technology, a blockchain start-up that intends to deliver off-chain data on the blockchain. Hdac Technology founder, Dan Sun Chung, is also the CEO of software firm Hyundai BS&C. Other partners include Web3, a non-profit organization involved in the development of Polkadot, Hydrogen (a FinTech company developing DeFi solutions), and  Kaiko (a data provider for exchanges).

Chainlink is also one of the few platforms that boasts a Gartner Cool Vendor award. As the world’s leading global research advisory firm, Gartner validates vendor claims to verify the value of a product.

How to buy Chainlink? 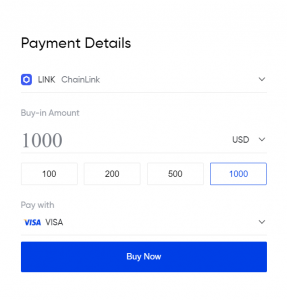 On Phemex you can directly buy LINK with a credit card and begin trading right away. We work with fiat partners, such as Banxa to facilitate all fiat to cryptocurrency purchases.

While some analysts predict that the price of LINK may hit $19 per coin, others see its price spiking past $20 or $25 before the year comes to a close. As of the time of writing, the price of LINK has been moving sideways at the $14 mark.

Even though the asset’s price movements stagnated as a result of the global pandemic, the coin has rallied back up in the past few weeks maintaining its position among the top ten coins in terms of market capitalization.

Given the purpose of the Chainlink project, which is to create useful tools with financial upside through the use of smart contracts, it is easy to see how the LINK token will gain value with time as adoption increases.

Whether you compare Chainlink to Cardano, XRP, or even Bitcoin, reviewing the architecture of the Chainlink platform reveals plans to go beyond the bounds of blockchain and into real-world value-based applications. This is what gives Chainlink a leg-up above other crypto projects whose value depends on speculation.

Chainlink is set to connect off-chain, on-chain, and cross-chain infrastructures, eventually becoming the benchmark for blockchain adoption and usage. In a world where data is increasingly becoming a sought after resource, the application of the tools that Chainlink is developing will cut across multiple industries.