What Is Ultimate Oscillator: Trade With Multiple Timeframes 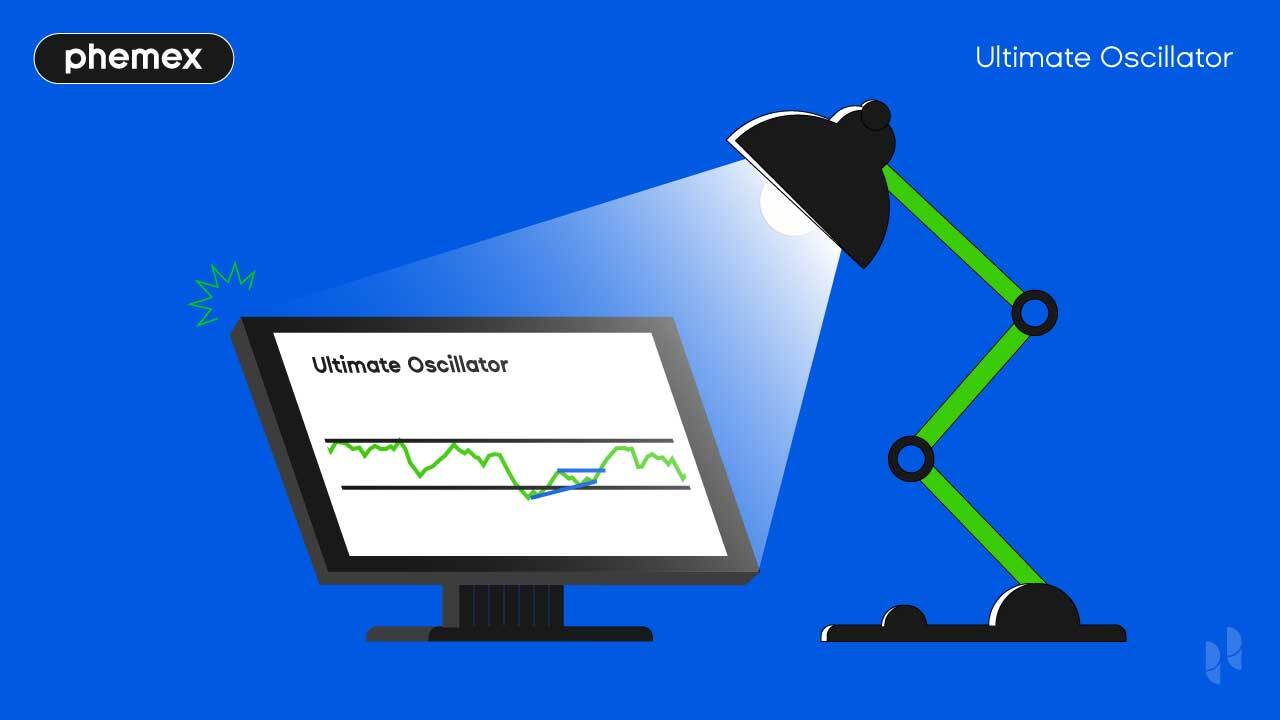 What Is The Ultimate Oscillator?

The Ultimate Oscillator (UO) is a technical indicator that measures price momentum. It is mostly used for reversal trading and trade signals based on overbought/oversold levels. It is range-bound with a lower limit at 0 and an upper limit at +100. Movement near the 0 rating indicates bearish trends and movement near +100 rating indicates bullish trends. Oversold level is considered below 30 and overbought level above 70.

The term “ultimate” was chosen by its inventor Larry Williams who claimed that the ultimate oscillator would use three separate timeframes to account for long-term and short-term price periods.

The UO was designed to avoid the shortcomings of other oscillators–the main issue with oscillators in reversal trading is that they send false signals. The trend line goes up as the price surge starts, and then it sends a false signal for a reversal as the trend advances. This is due to the limitation of using one timeframe.

The Ultimate Oscillator uses a 7-period, 14-period, and 28-period timeframe that can tell if the rally on Bitcoin (BTC) or an altcoin is going to advance in its current direction.

The indicator is a simple oscillator that is similar to the RSI indicator because it only deploys one line, making it easy to read the signals.

The most common use for it in crypto trading is for reversal trading. If the price goes up but the indicator is not trailing, we can expect a reversal to the downside and short it preemptively. The opposite is true for bullish reversals when we can open long trades.

Who Invented The Ultimate Oscillator?

The Ultimate Oscillator was invented by Larry Williams, a legendary trader and stock market analyst. He is the father of famous American actress Michelle Williams and ran for governor of Montana in the 1980s. Dissatisfied with modern indicators that send false signals because they use limited timeframes and designed the UO oscillator in 1976.

The oscillator was in private use until Williams released it in the “Stocks & Commodities Magazine” in 1985. In the introductory article, he described the need for three separate timeframes: Short-term, immediate-term, and long-term. The averages were 7, 14, and 28. Most modern implementations of the indicator (i.e. in crypto markets) use these time averages by default. However, users can extend or shorten any of these for their own trading style.

What Is The Ultimate Oscillator Formula?

Once the indicator has these variables for the daily prices, it divides the true range by the buying pressure:

To scale the individual results on an oscillator that goes from 0 to 100, it divides the averages for the different periods and multiplies them by 100:

This produces a result that can only be contained between 0-100. If the price of Bitcoin has gone up over 7 days, this will influence the oscillator line since the buying pressure increases and it will go into positive territory. However, this has to be sustained on the intermediate or long-term averages or it will signal a divergence at some point.

How to Use the Ultimate Oscillator?

We will use the Phemex platform for this demonstration. Head to “Markets” and choose one of hundreds of trading pairs such as BTC/USDT.

Click on “Indicators” at the top of the chart, and key in “Ultimate Oscillator” in the dropdown. Click on it to activate it below the Bitcoin chart: 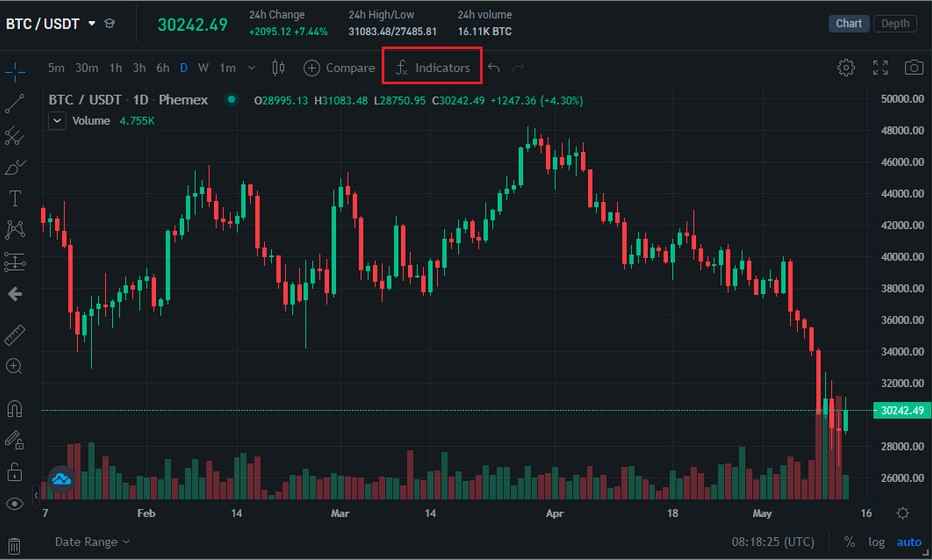 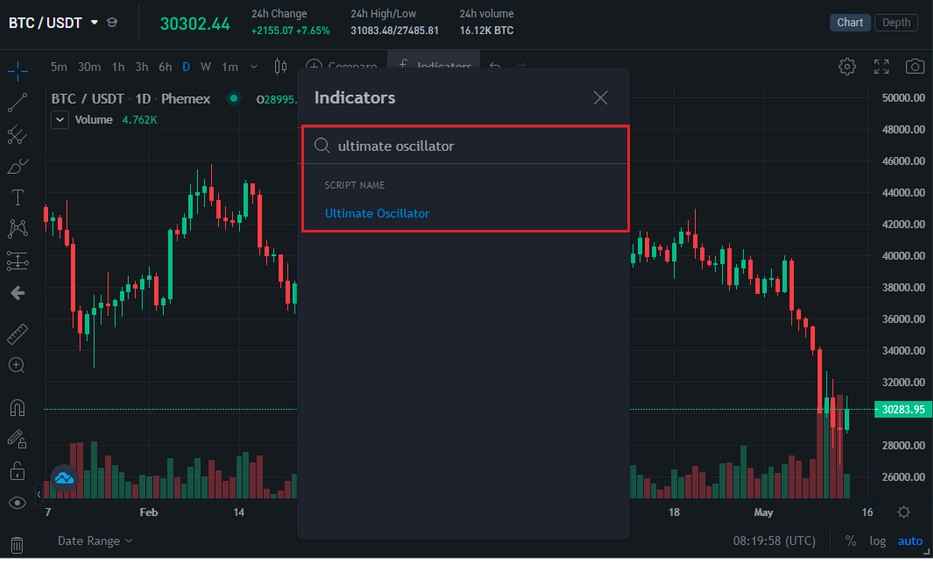 Notice how there is only one line even though it uses three period averages, which means it can’t be used for crossover trading. In that respect it is similar to the RSI indicator: 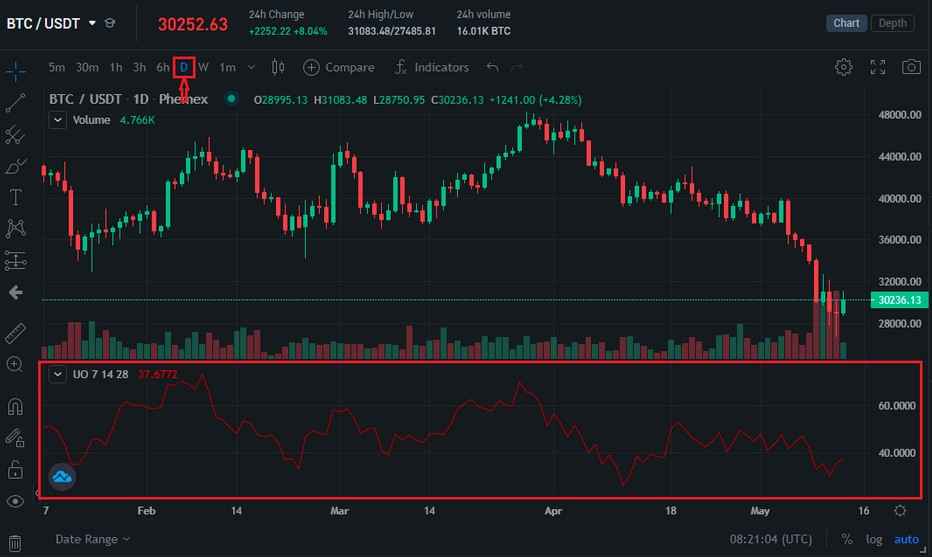 The Ultimate Oscillator is active underneath the Bitcoin chart.

We want to make sure that we are using the 1D (daily) charts as pointed out above for accuracy, or the buy/sell signals described by Williams lose relevancy. On short-term charts (4H, 1H, etc) the only relevant signals it generates are that Bitcoin is overbought or oversold.

How to Trade With the Ultimate Oscillator?

Ultimate Oscillator trading strategies are based around reversals. The indicator was primarily designed to avoid false reversals, which is why we will follow the inventor’s own textbook example to show a reversal on Bitcoin.

Here is a recent example using the daily chart on Bitcoin:

Three accurate signals and one false signal on the daily chart.

The highlighted examples are only when Bitcoin fell below 30 or rose above 70. If we compare them to the price action, we can see that it generated three accurate signals while the fourth did not produce a bullish reversal. The trend line in that example did not reach 70 after the buy signal was generated.

The “false” buy signal that the indicator generated might turn out to be accurate if Bitcoin reverses and rises above that price level. The most recent price action is a buy signal which could indicate Bitcoin is about to reverse to the upside. However, we can see that Bitcoin is mostly trading between 30-70 which means a trader has to wait patiently until it drops below 30 or rises above 70.

To increase the accuracy of the indicator, we can use the Stochastic RSI indicator and the EMA cross which help us with crossover strategies. In that respect, the UO indicator would serve as a replacement for the RSI indicator and tell us how overbought or oversold we are based on long-term values. Use the above example to activate all indicators simultaneously: 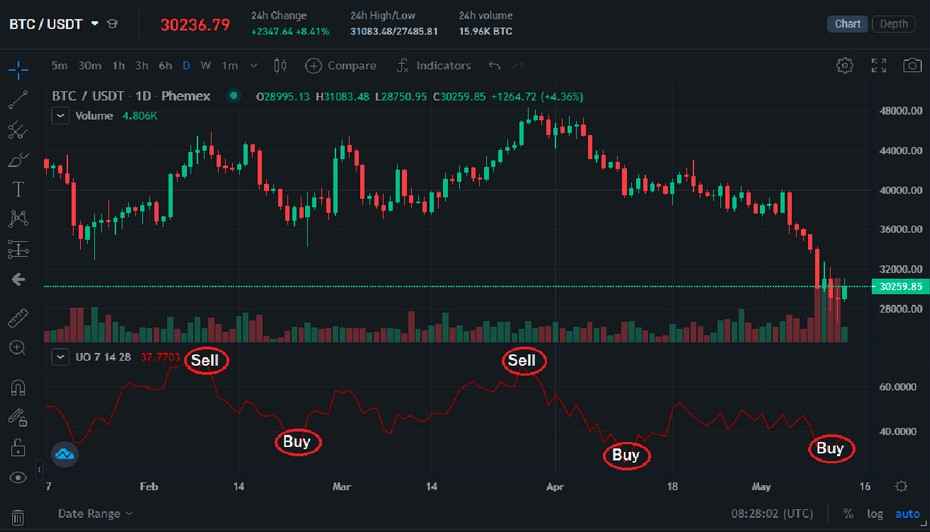 The top “EMA cross” indicates when the last Exponential Moving Average (EMA) lines crossed. This is a trend reversal signal. Currently, the green line is above the red line which indicates bearish momentum.

The UO and StochRSI indicators disagree and signal a bullish divergence is on the rise, since the trend line is moving in the upper direction from the bottom. As mentioned, values under 30 on the UO indicator are considered buy signals. This means the StochRSI indicator confirmed our trading bias if we were to open a long trade on Bitcoin.

The Ultimate Oscillator promises a lot by bearing the name “Ultimate” but is really not that different compared to indicators such as RSI. The primary drawback of using this indicator in the crypto markets is that it was primarily designed for the stock markets which experience less volatility.

Once a trader understands how to read oversold levels (30<) and overbought levels (>70) they can develop their own trading strategy with the indicator. It is not recommended to use it in isolation, but rather combine it with other indicators to confirm your trading bias. Momentum indicators such as RSI, StochRSI, MACD, and others can help verify these extreme reversal signals.

This Ultimate Oscillator can occasionally send a false signal in the crypto markets, mostly due to the volatility. If the line drops or rises above the 30-70 levels, use other technical indicators to verify the direction of the reversal.

To learn more about indicators you could combine with the Ultimate Oscillator, visit the Phemex academy technical analysis section.