Awesome Oscillator: An Indicator for New and Experienced Traders 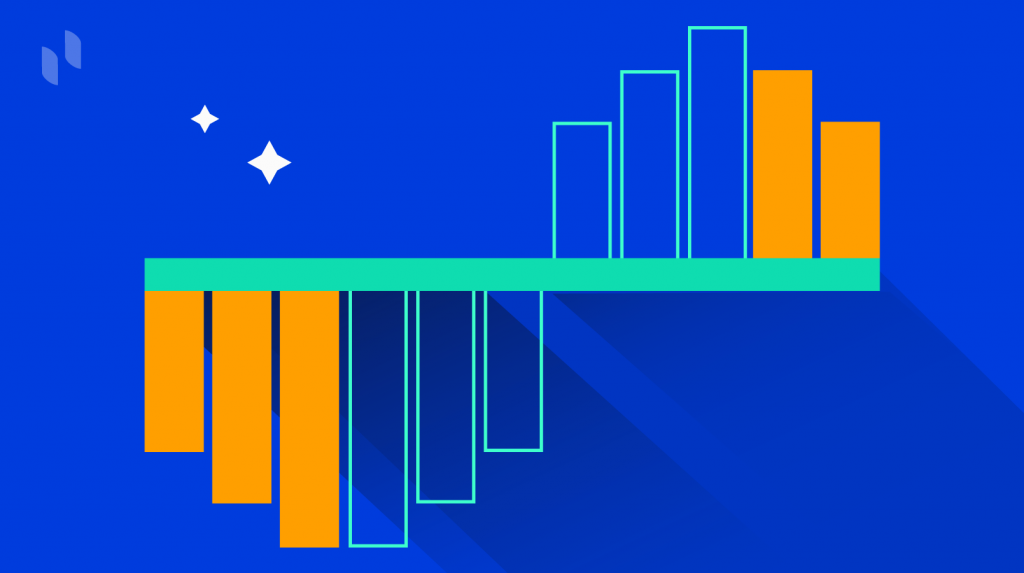 Markets are constantly moving, and its ability to sustain price movement in one direction is called market momentum. The term is used to define a function of change in price over a specified period against trade volume, meaning higher volumes have more impact on the momentum of price actions. However, market momentum is also a measure of the market’s sentiment towards certain events, and it’s only through understanding the market that traders can think ahead of it.

Market momentum is broadly calculated using the difference in the latest price of an asset and its cost a specific number of days prior and is measured by regularly taking price differences over fixed time intervals. The positive or negative difference is then plotted over a zero line, but there are numerous factors beyond just price that can affect market momentum.

In traditional markets, new of growth in corporate profits could increase equities momentum, while a rise in interest rates can catalyze negative price momentum. A company can also induce positive momentum by announcing its debt obligations or an increased projected cash flow.

In cryptocurrency markets, events like a successful protocol upgrade or governance voting systems’ results can positively or negatively affect momentum. The market’s momentum reflects the velocity of price changes, but history has shown that momentum is a much more reliable indicator in rising markets than falling ones.

This is because markets tend to rise more often than they fall, meaning bull markets can last longer than bear markets, giving growing markets more time to build momentum. Just like when a train accelerates from standstill to its top speed, the train will continue to move even after it stops accelerating before decelerating back to a halt. However, with analysts and day traders constantly tracking the market’s movements, once the fundamentals of a strong momentum are locked in, the price can shoot up rapidly, especially in markets as volatile as cryptocurrencies.

For momentum investors, the ride up is the most profitable part of the movement, with prices moving at high velocity and trade volumes soaring through the roof. Traditional markets usually experience corrections soon after a positive momentum movement, as the markets adjust their expectations, causing the price to retrace lower.

Cryptocurrencies usually experience something similar, but since liquidity in these markets is much lower, many corrective moves correlate to early investors and whales selling off to reel in profits. Put plainly, momentum cannot predict price movement but instead reflects the overall market’s sentiment. While it cannot protect investors against external market events, it’s always important to know when a momentum indicator signals a fundamental shift in sentiment over a temporary price movement.

What is the Awesome Oscillator?

One of the most reputed and widely-used indicators for tracking market momentum is the Awesome Oscillator. Created by the famous technical analyst and American trader Bill Williams, the Awesome Oscillator is plotted as a histogram, primarily using red and green to signify price difference since the previous period.

When the price is higher than before, the histogram produces a green bar, and if the price is lower, the histogram creates a red one. The Awesome Oscillator is a great momentum indicator, being easy to use for newer traders while offering a deeper complexity for more experienced traders to dive into. Though no indicator is perfect, having a solid grasp of using the Awesome Oscillator can be an incredible advantage against a market that isn’t always sure where it’s headed.

How to use Awesome Oscillator?

How is the Awesome Oscillator calculated?

Due to how oscillators function, the Awesome Oscillator reports values above and below a zero line. As mentioned above, it is plotted as a histogram with green and red denoting positive and negative differences. When the oscillator’s values appear above the zero line, it indicates the short-term moving average is trending higher than the longer-term one, and analysts can use this information to determine a number of signals.

Generally, positive plots on the histogram represent that bullish forces are driving the market,

Bill Williams, the creator of this oscillator, was so famous that some people refer to it as the Bill Williams Awesome Oscillator. He was also responsible for developing the Bill Williams Alligator, the Market Facilitation Index, the Fractals indicator, and the Gator Oscillator. Many of his indicators and other technical analysis tools are usable in a wide range of market scenarios. In fact, they apply to all kinds of markets, including stocks, commodities, forex, indices, and even cryptocurrencies.

Williams’ other indicators were also created to confirm or invalidate trends and define reversal points ahead of time, but none of them are as widely applicable as the Awesome Oscillator. Williams was also an author of books on psychology, technical analysis, chaos theory, and trading in different markets.

By comparing recent market momentum with the general momentum over a wider time frame, the Awesome Oscillator provides traders and analysts with a convenient picture of the market’s mindset. Using an array of signals like the zero-line crossover, the twin peaks, and the saucer, to name a few, investors can rapidly identify potential trade opportunities to profit from high-momentum market scenarios.

Awesome Oscillator and the zero-line crossovers

The most basic alerts provided by the Awesome Oscillator are the zero-line crossovers, where a cross above the line represents a buying opportunity, and a cross under is generally viewed as a signal to sell. The saucer trading signal allows analysts to identify rapid market momentum changes by looking for changes in three consecutive bars on one side of the zero-line.

Saucers can be either bullish or bearish, depending on their position with respect to the zero-line.

A bullish saucer can be identified by the Awesome Oscillator positioned above the zero line followed by two consecutive red bars. The second red bar tends to be lower than the first and is followed by a green bar. Traders often try and enter long positions during the third bar or in the red bar immediately preceding it.

On the other hand, a bearish saucer is easily identified by the two consecutive green bars below the zero-line, which are immediately followed by a red bar, where the second green bar is lower than the first. Traders will try and enter short positions during the third bar or in the green bar immediately preceding it.

The twin peaks strategy is also quite versatile and applicable to both bullish and bearish markets.

When there are two momentum peaks below the zero-line, it is called a bullish twin peak, and some traders believe a green bar following the second peak signifies a potential break above the zero-line. This green bar serves as a strong buy signal, but for the pattern to be valid, not only does the second peak need to be higher than the first peak, but the trough between the two peaks must also not break above the zero line.

A bearish twin peak takes place when two green peaks are observed above the zero-line, and similar to its bullish counterpart, is followed by a red bar under the zero-line – the sell signal.

The Awesome Oscillator is primarily used by technical analysts for its integration of more standard momentum oscillators while adjusting their calculations to iron out weaknesses. While the indicator often gives reliable signals, it’s always best to confirm using other indicators to minimize risk of loss.

Though the Awesome Oscillator is most useful in trending markets, it mostly provides weak signals in ranging and consolidating markets. As a leading indicator, the Awesome Oscillator can predict future price momentum, which traders can use to determine potential price movements. Still, its signals aren’t always accurate and are actually most useful in confirming trends already caught by other indicators.

Limitation of The Awesome Oscillator

Just like any other technical indicator, the Awesome Oscillator isn’t perfect. There are times when it reports low market momentum while the price continues to make new highs and high momentum signals during consolidatory movements. Using the Awesome Oscillator is far from a foolproof strategy against the market, but sometimes analyzing these discrepancies can offer more profound insight.

The Awesome Oscillator’s signals don’t always reflect the market’s immediate actions, which allows the indicator to detect market divergences – a powerful tool in the hands of any skilled trader or analyst. A divergence occurs when the Awesome Oscillator reports momentum that doesn’t conform with recent price action and can often indicate a reversal or corrective move soon.

There are also ‘hidden’ divergences that can result in both bullish and bearish markets. However, they are rarer and require a more trained eye to spot. These hidden divergences occur when the momentum and price action broadly correlate, but not at every stage. For example, a hidden bullish divergence occurs when the price makes a higher low, but the indicator’s low continues falling.

Like any trading signal, divergences don’t guarantee any future price action and are taken more as scenarios that have a likelihood of causing the market to behave a certain way. This essentially means that its signals will be wrong a lot of the time, but a divergence can give traders the clarity they need to place their investments in ideal positions, given the right circumstances.

Combine the Awesome Oscillator with other indicators

Though the Awesome Oscillator alone is quite comprehensive, it can be much more effective when combined with other oscillators that report overbought and oversold markets, such as the Stochastic or RSI Oscillators. A buy signal is much stronger when supported by an oversold market, while overbought markets add credence to the oscillator reporting a sell signal.

While the Stochastic Oscillator pairs well with the Awesome Oscillator, it also collaborates exceptionally well with the Moving Average Convergence Divergence (MACD) indicator, the Relative Strength Index (RSI) oscillator, and other technical indicators that track momentum.

The Awesome Oscillator is undoubtedly a powerful and versatile tool that should be part of any investor’s toolkit, but it only takes one bad trade to wipe out all of your profits. For contrarian traders, an extremely high Awesome Oscillator reading may come across as a signal for a potential reversal, but this can be a bad way of using the indicator.

Usually, a major explosion of the Awesome Oscillator in any direction is an extremely strong signal of a trend. In these cases, whether it’s a charging bull or a raging bear — stay out of the market’s way. It’s also vital to use stops when trading; there’s no reason to let the market take advantage of your funds without you having a say in it.

The Awesome Oscillator is also known to be difficult to use with assets with a small circulating supply or ‘low float’ stocks. This is largely down to the liquidity of the investment in question, but the Awesome Oscillator trips horribly in markets where even small trades push the market in a particular direction.

This isn’t necessarily the Awesome Oscillator’s fault, as low float securities move erratically over short periods. In fact, most indicators have a hard time with small-cap investments, but this makes it near impossible to use the Awesome Oscillator in crypto markets without pairing it with more reliable tools.

However, the Awesome Oscillator is still one of the most widely used and vetted technical analysis tools available today. While there are bound to be traders who swear against it, with how diverse its range of functions is, it’s safe to say the trading world as a whole would be far worse off without it.