Pullback vs. Retracement vs. Reversal: What Are The Differences?

Pullback, retracement, and reversal are among the most common and basic terms in cryptocurrency trading. They are popular trading patterns that traders use to time the market. However, there is still some confusion about these terms in the crypto community, particularly among novice traders. 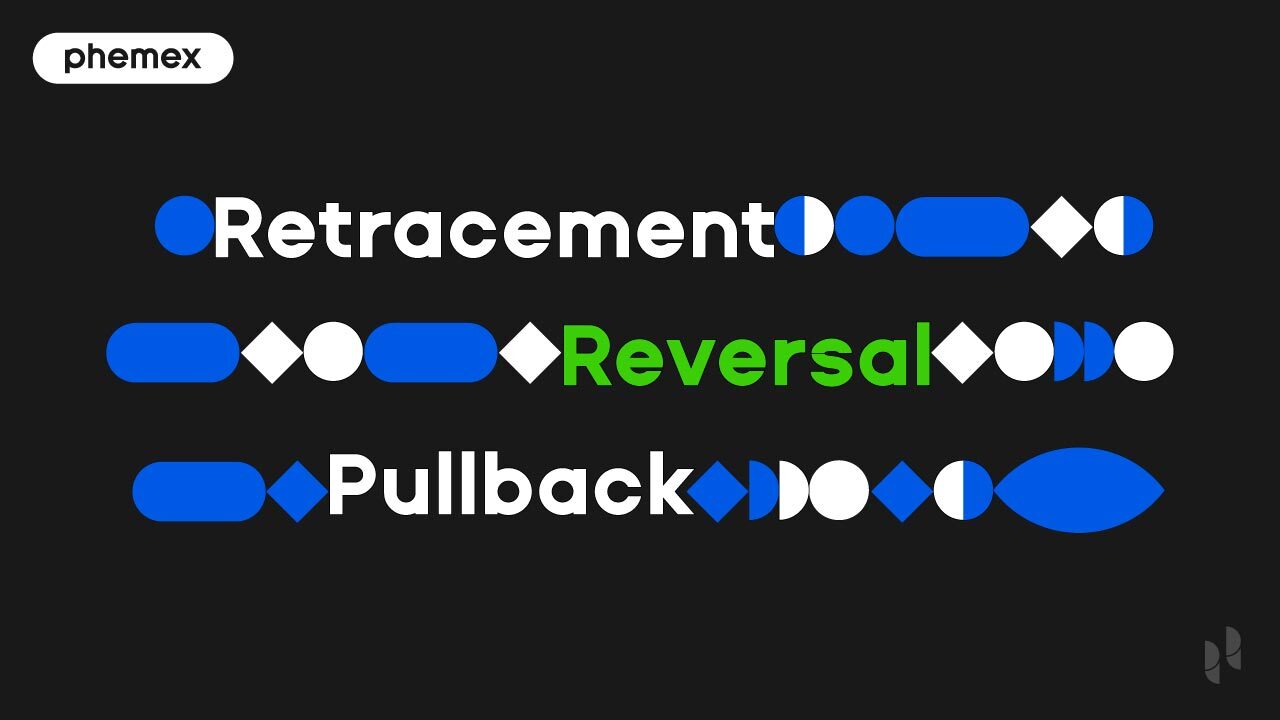 A pullback refers to a temporary halt or drop in a crypto’s overall uptrend. It happens due to several reasons. Traders with existing positions may be taking profits, or are losing confidence after certain changes in economic conditions.

However, pullbacks are usually regarded as a chance for traders to purchase a particular crypto that has experienced a vast upward price movement. This could be because the project’s fundamentals are still solid, and signs suggest that the uptrend will resume. 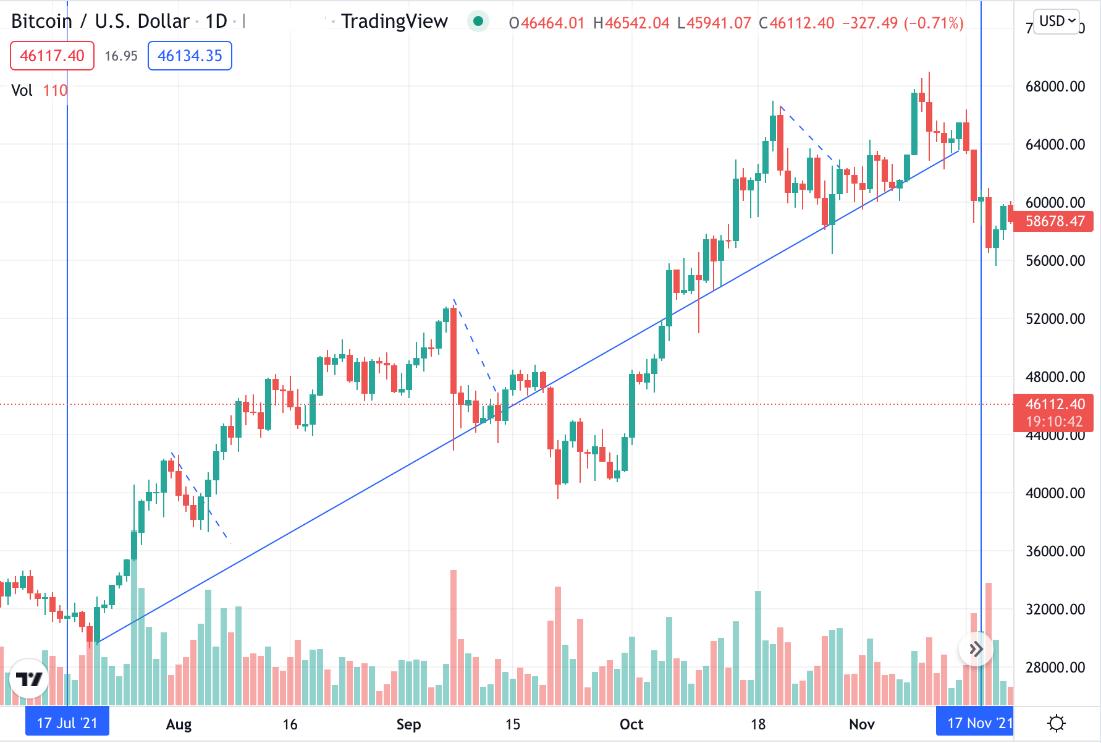 Pullbacks generally do not shift the underlying uptrend of a particular crypto and are usually expected within the context of a stable uptrend. As illustrated above, Bitcoin (BTC) underwent several pullbacks in its uptrend between July to November 2021.

Nonetheless, traders need to be mindful that pullbacks can sometimes signal an actual reversal which may result in huge losses. In this case, technical indicators, such as moving averages and pivot points, can help traders examine whether a pullback is a reversal or not. The rationale behind these indicators is that they highlight levels of support on a particular crypto. If a pullback breaches this level of support, a reversal is likely to happen.

“Retracement” is very similar to “pullback.” It refers to a minor pullback or, more broadly speaking, a temporary change in the trend of a crypto. Therefore, it is also a retracement if a crypto’s price rises temporarily in an overall downtrend. Often both terms are used interchangeably. 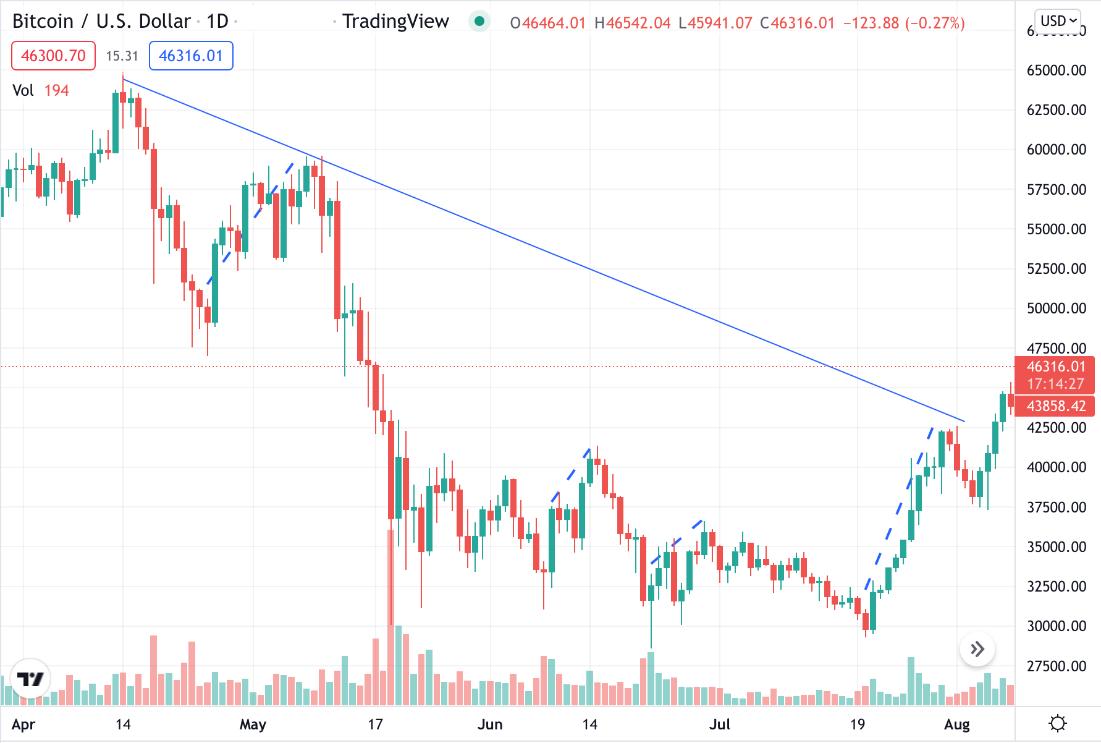 The chart above illustrates another retracement in contrast to a pullback. BTC’s price briefly rose at several points in an overall downtrend.

A retracement by itself does not say much about the real market. Instead, traders need to use technical indicators, including moving averages and Relative Strength Index (RSI), to identify whether the current trend is likely to carry on or a significant reversal is about to come.

A reversal is a turnaround in the price direction of a crypto. It can apply to an uptrend or downtrend. Sometimes, a reversal is referred to as a trend reversal.

Reversals mostly happen in intraday trading and occur relatively quickly, but they can also be observed over days, weeks, or even years. Technical tools or indicators such as moving averages and trend lines help traders identify reversals.

The chart above shows that BTC’s price initially goes up in an uptrend, making higher highs and higher lows. Then, the price breaks below the trendline and reaches lower highs and lower lows as it declines. Although some retracements can be observed, the down trend continues, confirming a reversal.

How to Differentiate Pullbacks and Retracements from Reversals?

Some newer traders might be confused about whether a price movement is a pullback, retracement, or reversal. Traders need to know how to identify one from another as traders who fail to do this will suffer huge losses and missed opportunities. The table below shows several key differences:

How to Trade Retracements?

Before learning how to trade retracements, traders must first know the common technical indicators that can help them identify retracements.

How to Trade Reversals?

Before knowing how to trade reversals, some of the most common indicators can help traders identify reversals.

A reversal identified from a BTC/USD chart from January to July 2021, 1-day time frame. (Source: TradingView)

Pullback and reversal trading can be very profitable if traders identify and separate them using the aforementioned indicators. Pullbacks and retracements are short-lived in nature and do not indicate a shift in the major trend. In contrast, reversals are long-term turnarounds of asset price that often involve project fundamentals.

However, like all trading strategies, both pullback and reversal trading come with a certain degree of risk. One of the biggest drawbacks of pullback trading is that a pullback could be the beginning of an actual reversal. Similarly, it is hard to verify whether a reversal is a reversal at the initial stage. False signals and inappropriate use of indicators are also issues that trouble traders. Hence, traders are encouraged to understand pullback and reversal trading limitations. In addition, traders should use a combination of other available trading tools and practice with such tools before using them in real-life trades.