What is IOTA: IOTA and the Internet of Things 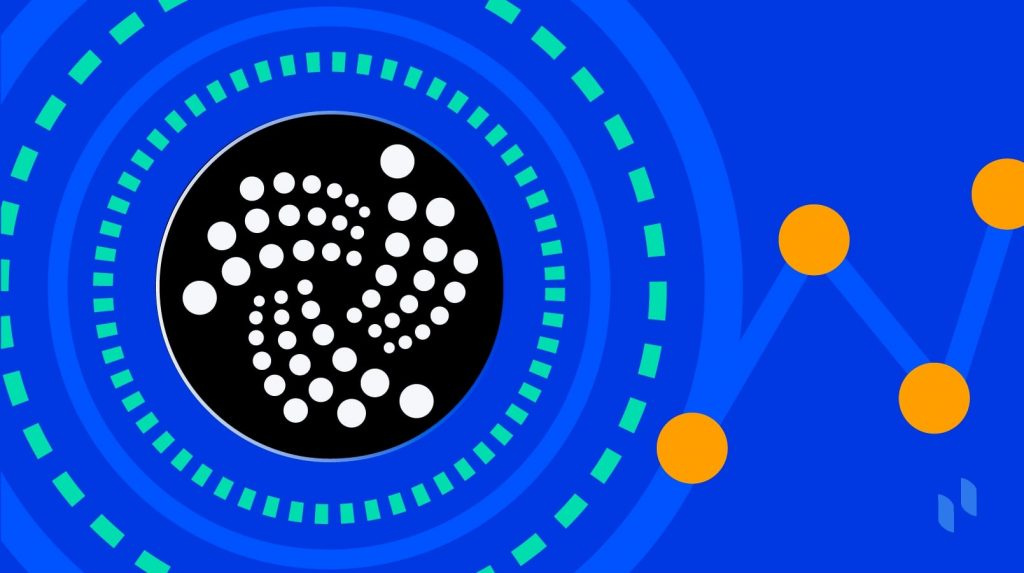 Launched in 2016, IOTA (MIOTA) is an open-source distributed ledger designed to record and execute transactions between machines in the Internet of Things (IoT) ecosystem. MIOTA trades at $1.89 per token with a capped supply of 2.78 billion, for a total market cap of $5.25 billion.

Bitcoin’s (BTC) success in the past decade has proven blockchain’s real-world value. Blockchain technology is currently used across healthcare, finance, business, and government, among other industries. However, blockchains come with drawbacks — most notably, unavoidable transaction fees. However, minimizing fees is not easy. This is because fees are the incentives for block creators.

To avoid this obstacle, IOTA does not incorporate the same blockchain technology used by most cryptocurrencies. Instead, it uses a new data structure known as the Tangle, which is based on directed acyclic graph (DAG) architecture. The Tangle is another type of distributed ledger technology, specifically designed for the IoT ecosystem. Unlike blockchains, the Tangle facilitates fee-less payments regardless of transaction size, and has done away with miners and blocks.

With Proof-of-Work, each transaction requires the transaction creator to sacrifice some processing power. This allows IOTA to protect the network against spam and Sybil attacks. Both attacks require the issuance of high transaction volumes. Proof-of-Work makes it harder for attackers to generate enough transactions to disrupt IOTA’s network.

What Does IOTA Do?

IOTA was designed specifically for use on connected machines and devices. Due to its scalability and zero transaction fees, IOTA’s network can theoretically facilitate data exchange with IoT-connected devices worldwide. As such, IOTA is involved in industries such as mobility, industrial IoT, and eHealth.

In another partnership, the IOTA Foundation and Jaguar Land Rover unveiled a project that integrates a “Smart Wallet” into vehicles. This project utilizes IOTA’s Tangle for data exchange, which allows the vehicle to earn money, make micropayments for services, and exchange information. For example, while driving the vehicle will automatically report information such as road hazards and traffic conditions to the relevant parties. The driver can also automatically earn a small amount of money depending on how much data they are willing to share.

This year, the IOTA Foundation and Dell Technologies jointly announced Project Alvarium, the world’s first demonstration that measures the trustworthiness of data. Project Alvarium offers a measurable way to evaluate data before it is used for critical business functions. The system logs the data along its journey from an IoT device sensor to the cloud. Every interaction is given a trust rating based on industry-specific standards. These scores are logged onto IOTA’s Tangle to ensure the integrity and avoid tampering.

What Are Some Potential IOTA Applications?

IOTA has two pilot projects that can provide a glimpse into its potential applications.

In 2017, the IOTA Foundation announced the Data Marketplace. The proof of concept allows participants to exchange and monetize their sensor data to interested parties rather than keeping the data locked and wasted in silos. The marketplace uses Masked Authenticated Messaging to ensure data integrity and allows encrypted data transfer. As of 2019, more than 70 organizations have signed up for the Data Marketplace. Most of the participants are weather stations, environmental machines, and power stations.

In 2019, IOTA launched the Industry Marketplace, the world’s first autonomous and decentralized virtual marketplace. This marketplace was built on specifications developed by Plattform Industrie 4.0, Germany’s platform for advancing the intelligent networking of industrial machines and processes. Industry Marketplace’s main purpose is to automate physical and digital goods or services trade for industries such as autos, energy, and media.

Who Is Behind IOTA?

IOTA sold 999,999,999 tokens and raised 1,337 BTC. They later increased the token supply to 2.78 billion, citing that a higher supply optimizes small-value transfers without negatively affecting efficiency. The total token supply was distributed in proportion to the initial investors. In 2016, IOTA launched its network.

The next year, early IOTA token investors donated 5% of the funds from the token offering to the IOTA Foundation. The IOTA Foundation was founded in Germany as a non-profit corporation to assist in the research and development, education, and standardization of IOTA technology. The foundation is a board member of the International Association for Trusted Blockchain Applications, and a founding member of the Trusted IoT Alliance and Mobility Open Blockchain Initiative (MOBI). 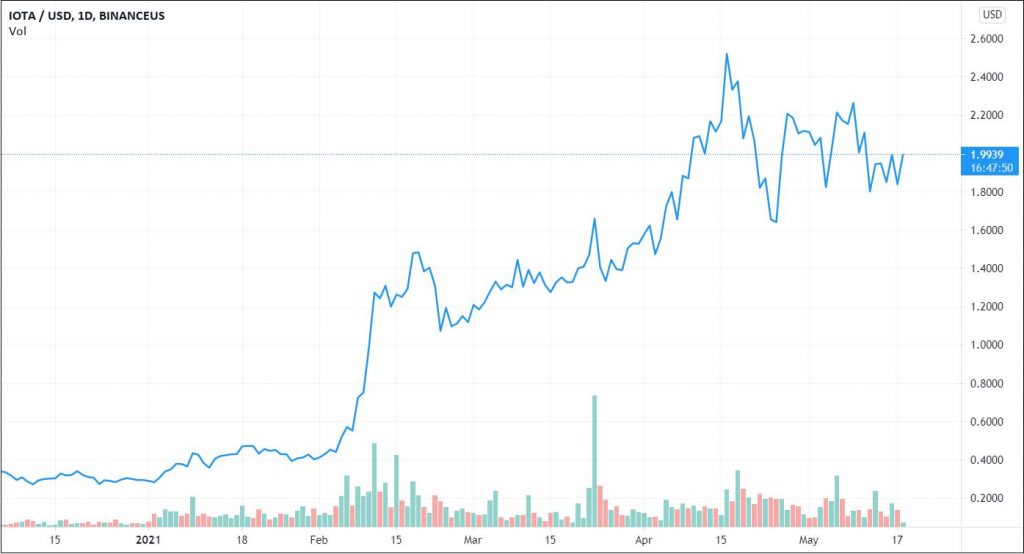 The value of Tangle and IOTA’s technology, partnerships, and integrations are the possible factors influencing IOTA’s price. The surge in early February 2021 is not attributable to the overall bullish uptrend in the market, but to the Project Alvarium announcement described earlier. The subsequent price dip indicated that some long-term holders may have capitalized on this upward trend by selling.

IOTA is currently ranked #33 by market cap. All of IOTA’s tokens were already pre-mined and created at its launch. The circulating supply and max supply of IOTA are fixed at 2,779,530,283,277,761 tokens. Digital currency exchanges trade IOTA in MIOTA units, where 1 MIOTA equals 1,000,000 IOTAs.

What Is the Future for IOTA?

In 2017, an article stated that IOTA in its current form is centralized because paths in Tangle are centrally directed through the Coordinator node run by the IOTA Foundation. In the same year, IOTA published an article explaining that the network is 100% decentralized. Every node verifies that the Coordinator is not breaking consensus rules by creating IOTAs out of nothing or approving double-spendings. In 2020 however, IOTA announced plans to permanently remove the Coordinator node and launch a fully decentralized network. The upgrade, called IOTA 2.0 and also known as Coordicide, is expected to be completed by this year.

IOTA and the IoT ecosystem allow companies and businesses to introduce business-to-business models. Data is used as a resource to provide services or goods that can be sold on the open market in real-time without any transaction fees. The Tangle provides secure data transfer through communication channels between devices. With zero transaction fees and near-infinite scalability, IOTA hopes to eventually grow into a standard cryptocurrency-based asset for IoT.

IOTA is cooperating with for-profit, non-profit, governmental, and academic organizations such as Dell, Bosch, and Fujitsu. It has also been referenced in over 100 patents. At present, it is the most prominent IoT-focused platform and could grow and form more strong partnerships as Industry 4.0 continues to develop.

Does IOTA Have Any Security Vulnerabilities?

In September 2017, researchers found serious vulnerabilities with IOTA’s former Curl-P-27 hash function. The function produced the same output when given two different inputs, signifying that the function was broken. In the analysis, the researchers stated that funds from Tangle could have been destroyed or stolen.

IOTA has also been the target of multiple attacks. In January 2018, more than $10 million USD worth of IOTA tokens were stolen from users that used a malicious online seed-creator. The next year, 50 IOTA seeds were compromised due to a vulnerability in a third-party payment service integrated into the wallet managed by the IOTA Foundation. This resulted in a theft of $2 million worth in IOTA tokens. The IOTA team has since patched the vulnerabilities.

IOTA has set incredibly high goals by positioning itself centrally in the next industrial revolution. While there were a few security-related setbacks in the early days, the team responded appropriately to ensure an enterprise-ready system.

With the IoT’s growing significance, competition is inevitable. Among IOTA’s most notable competitors are IoT Chain, Hedera Hasgraph, and IoTex. These platforms have few to no fees, are compatible with low-power devices, and are suitable for machine-to-machine communication. Despite this, IOTA is still the leader due to its numerous partnerships and impressive roadmap progress.