What is Stellar Lumens (XLM): Is XLM A Good Investment? 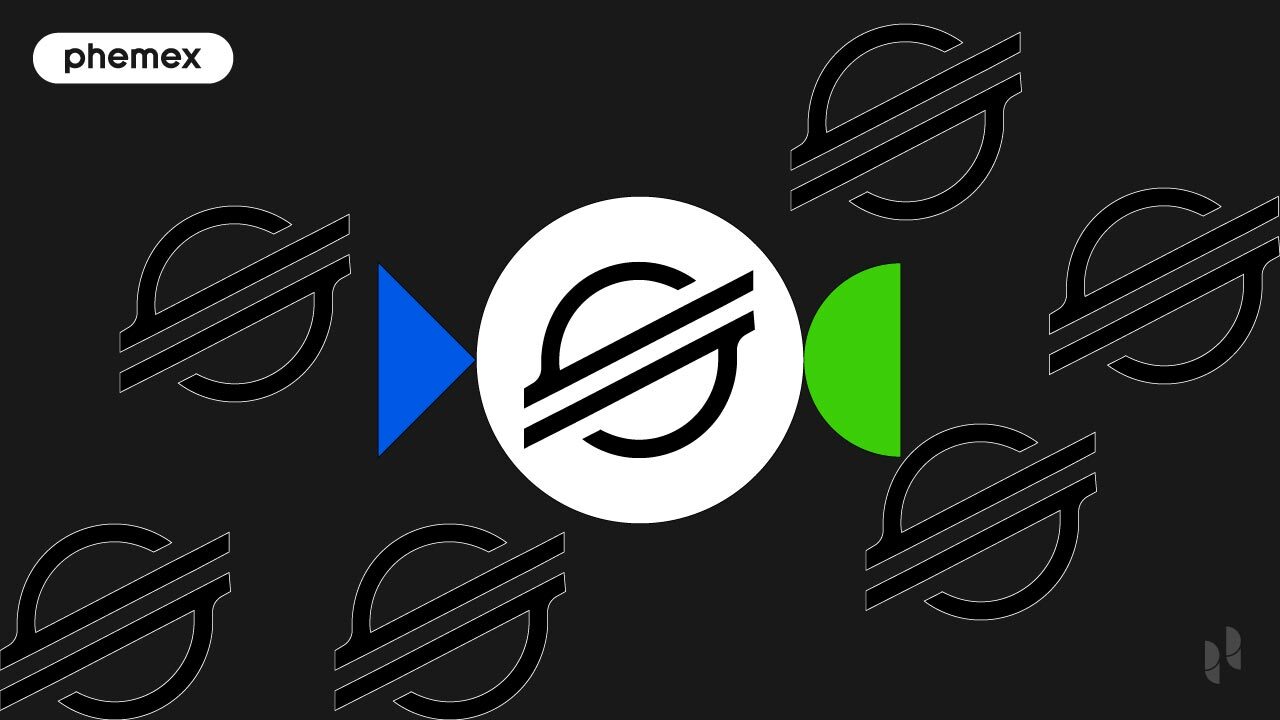 What is Stellar Lumens?

Stellar is a blockchain-based payment technology company created in 2014, and the Stellar Lumen (XLM) coin is its native digital currency. Stellar Lumen’s mission is to enhance, rather than replace the existing financial system, by enabling people to transfer fiat currencies as digital money or crypto.

Nowadays, sending money internationally is a pain–there are multiple bank charges users have to bear, and it can take days for a transfer to reach the intended recipient.

With Stellar, a user can create a “dollar token” or a digital version of a US dollar and send it anywhere in the world, whereby one Stellar dollar token is the equivalent of $1. Why would this be useful?

A digital dollar token means that anyone can own the value of a dollar without having a US bank account. This can make all the difference for someone who is working in, say, the US, and needs to send money back to his family in a politically or economically unstable country with an unreliable banking system. The expat can send dollars back home, and the recipient can hold them, safely and digitally, until he or she is ready to trade in the digital dollars for some local currency.

What is Stellar Lumens used for?

Beyond US dollars, the Stellar network can also be used to purchase digital versions of different currencies, which is extremely useful for people living in countries that do not have a strong national currency and want to maintain the value of their savings in another currency.

The borderless, global nature of the network also means that an American company can pay a vendor in Asia in dollars almost instantaneously instead of waiting days for payment to settle. The vendor can in turn pay his suppliers faster–accelerating overall trade and creating wealth faster for everyone.

Because the dollars represented by the digital token never actually move as the value changes hands, these transactions do away with much of the costs and friction of the current banking system.

What is XLM used for?

Where the XLM token comes in is that it acts as an intermediate currency for these transactions, and is also used to pay transaction fees. The Stellar protocol converts the fiat currency first into XLM, and then into the requested currency.

While high fees can plague both fiat-based payments solutions such as PayPal, it has also affected blockchains like Bitcoin and Ethereum due to congestion, as both these chains use a Proof-of-Work consensus protocol, which is not very scalable.

Stellar addresses this pain point with a 0.00001 XLM fee for each transaction–which translates into almost nothing, considering each XLM costs $0.10 at the time of writing. The Stellar blockchain is secured by what is called the Stellar Consensus Protocol (SCP), which ensures high speed and low cost for transactions made on the network.

What are Stellar Lumens Use Cases?

Since its launch in 2014, the Stellar network has processed over 2 billion transactions made by over 6.5 million individual accounts, which includes both large enterprise companies and startups.

In 2014, Brazil’s first Bitcoin exchange, Mercado Bitcoin, announced that it would be using Stellar’s network to facilitate transactions on its platform.

By 2015, Stellar had accumulated over 3 million registered user accounts and had a market capitalization of over $15 million.

In 2018, Stellar partnered with TransferTo to offer cross-border payments to more than 70 nations. It also became the first blockchain platform to obtain a Shariah-compliance certificate for payments and asset tokenization.

The sheer number of cryptocurrencies available today can make it daunting to figure out what’s worth investing in and what isn’t. The blockchain industry is notoriously risky, and with how volatile and unregulated crypto markets are, it’s key to amass as much information as possible before making any investments.

How does the Stellar Network find currency trading pairs?

Stellar’s core blockchain functionality allows it to facilitate, and even create, currency trading pairs in a rapid and streamlined manner. In order to do this, the Stellar network uses what it calls ‘anchors’ which can be either users or businesses that hold currency, deposit funds, and issue credit depending on the need.

Anchors are used by the Stellar network to provide users with enhanced functionality and compatibility between different currencies when traded online. Think of these anchors as bridges that connect the various currencies available on Stellar–all monetary transactions on Stellar (except XLM) use anchor credit, and the system’s dependence on them for deposits and credit issuance does ultimately require some level of trust.

To use Stellar’s own analogy, anchors are the on/off ramps used by the Stellar network’s driving train, moving between existing rails (fiat deposits) to new train tracks (cryptocurrency).

How does Stellar’s consensus protocol work?

Instead of being mined or staked, the Stellar blockchain is secured by a unique consensus mechanism called the Stellar Consensus Protocol (SCP), which according to its white paper, offers four main qualities as follows:

Contrary to what many think, this current Stellar network is not a fork of Ripple; it runs on the new SCP consensus model and its software, the Stellar-core, was written from scratch.

Who is behind Stellar crypto and the XLM Coin?

Stellar was co-founded by one of the most prolific investors in the cryptocurrency space, Jed McCaleb, who also developed Ripple. Dubbed one of the top 10 people leading the blockchain revolution by The New York Times, McCaleb also started Mt. Gox, one of the earliest Bitcoin exchanges processing over 70% of global BTC transactions at its peak.

After serving as the CTO of Ripple until 2013, McCaleb then co-created the non-profit Stellar Development Foundation (SDF) in collaboration with online payment processing firm Stripe CEO Patrick Collison to allow for more consumer focused, cross-border transactions. The project received $3 million in seed funding from Stripe.

McCaleb isn’t the only big name attached to the project. David Mazieres, a computer security systems professor at Stanford, is the SDF’s chief scientist. Mazieres was responsible for creating the federated model for internet-level consensus used by Stellar, the aforementioned Stellar Consensus Protocol (SCP).

Microsoft veteran and devoted contributor to the project, Nicholas Barry, is the SDF’s current CTO. Stellar’s CEO and executive director, Denelle Dixon, comes from a decade-long tenure at Mozilla in various crucial roles.

Stellar’s other founder, Joyce Kim, works as the executive director of Stellar.org. Earlier, Kim worked as a VC at Freestyle Capital, co-founded a mobile commerce startup, simplehoney, and is a managing partner at Sparkchain Capital.

The SDF mandate is to make Stellar the standard for global payments, and with no shareholders or annual reports, the future could be far more decentralized than we expect.

Stellar Lumens/XLM coin has a circulating supply of 24.6 billion coins and a current value of $0.11, giving it a market cap of roughly $2.85 billion.

The price of XLM has performed admirably over its comparatively long lifespan. Starting out at a price of $0.0027 in 2014/15, XLM hit a tremendous high of $0.89 in January 2018, corresponding with Bitcoin’s high of around $17,527 during that same period. 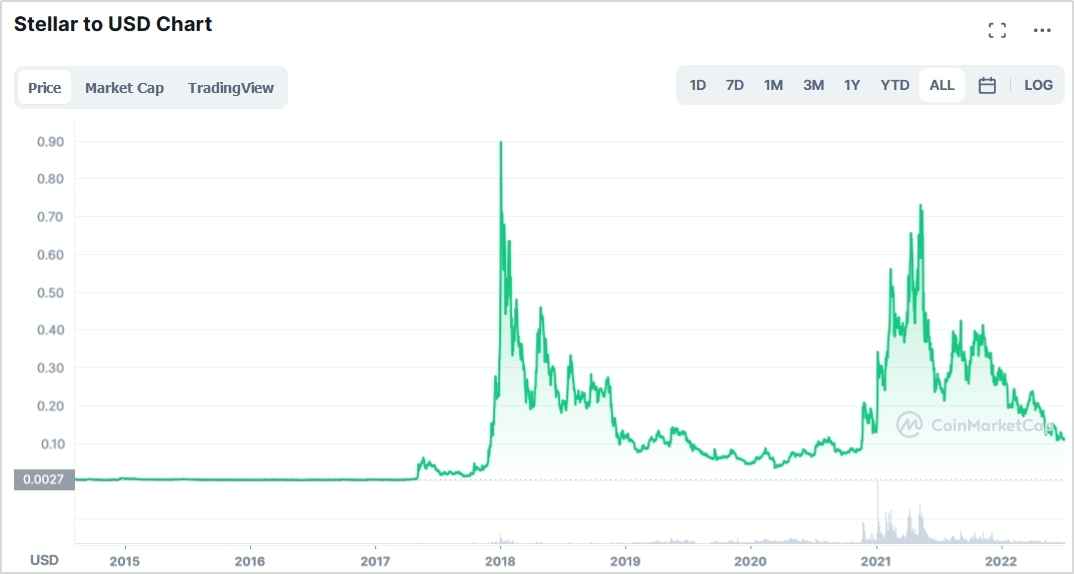 The coin hit lows of $0.03 in 2020, but it was not long before it would bounce back, and hard–in early 2021 the Ministry of Digital Transformation of Ukraine announced that it will partner with Stellar to use its blockchain as a platform to build its central bank digital currency (CBDC).

The news caused the currency to surge, reaching almost $0.70 and performing well for most of the year. However, the recent downturn in the crypto market has taken its toll on XLM as well.

In the age of decentralized finance, Stellar even has a built-in decentralized exchange, and its low transaction costs and quick confirmations make it quite a compelling platform for DeFi development. It was also recently announced that USDC, a prominent USD-pegged stablecoin, would be tokenized on the Stellar blockchain from Q1 2021, bringing over $2.7 billion in liquidity onto the network.

Through the Stellar Community Fund, the blockchain has also invested $5 million into Abra, a global crypto/fiat wallet exchange app in 2020. Abra has since implemented many new features onto its platform, including a simplified lending protocol to earn interest. Soon after Abra’s funding, Stellar was added to the Samsung Blockchain Keystore, showcasing the network to an entirely new market.

The Stellar Development Fund has also invested over half a million dollars into the Berlin-based instant payments platform, SatoshiPay. Having made investments worth over $6.3 million in 2020 alone, Stellar is en route to bringing blockchain to the average consumer.

Unlike Bitcoin, which can take multiple block confirmations to verify a transaction has gone through, Stellar confirms transactions in mere seconds. Of the blockchain’s 105 billion pre-mined XLM tokens, 55 billion tokens worth almost $5 billion were burned by the Stellar Development Foundation to streamline its development goals.

The burn was also conducted to better project the platform’s utility of the following ten years, but after climbing to a peak value of $0.70 in 2018, XLM is now only worth around half as much. The token had been trading under $0.10 for most of 2020. That isn’t to say Stellar and its associated XLM token aren’t valuable. In fact, it’s one of the top 10 cryptocurrencies by market capitalization.

While the ongoing Bitcoin bull-run has had a small effect on the price of XLM, pushing it above the $0.17 mark, the token’s price shot up by 40% in early January 2021 after Stellar announced its partnership with the Ukrainian ministry. While the project has seen its fair share of challenges over the last few years, Stellar is building a platform that could change how the world does business.

How to invest in Stellar Lumens (XLM)?

Phemex offers both spot and contract trading for investors to choose from. However, for beginning crypto buyers, spot trading is recommended. To buy XLM on Phemex, follow the instructions below.