What is Ren: A Decentralized Dark Pool

Launched in 2020, Ren (previously Republic Protocol) is a Singapore-based protocol designed to provide liquidity and interoperability between blockchain networks. At the time of writing, Ren trades at $0.3992 per token with a circulating supply of 997 million, for a total market cap of $398 million. While the popularization of decentralized finance (DeFi) has made traditional financial services such as borrowing and lending more accessible than ever, DeFi decentralized apps (DApps) still face issues in liquidity and interoperability.

Most DeFi applications are built on Ethereum (ETH) to make use of technologies such as the Ethereum Virtual Machine (EVM) and ERC-20 standard. While this means these applications tend to be interoperable with other Ethereum projects, they lack the ability to interact with other blockchains in an efficient and secure manner.

The result is that DeFi still remains inaccessible to much of the crypto space. For instance, holders of Bitcoin (BTC), which represents 43.53% of the total crypto market cap, have no easy way to yield farm or leverage their assets. Cross-chain interoperability solutions seek to enhance the market penetration of DeFi applications and improve liquidity across various blockchains.

Three major solutions have been proposed to implement cross-chain interoperability:

Ren (REN) utilizes a modified version of the tokenization implementation which relies on a network of private and randomly grouped nodes called “Darknodes” to deliver decentralized and private custody. The Ren network requires all Darknodes to run a unique secure multiparty computation (sMPC) algorithm, which enables the trustless execution of scripts, where inputs and outputs are hidden from all parties, even the Darknodes themselves.

Much like in Proof-of-Stake networks, Ren incentivizes good behavior by requiring Darknode operators to stake a collateral of 100,000 REN and issuing rewards for powering the network in the form of transaction fees. The network’s supply cap and collateral requirements creates an upper bound of 10,000 Darknodes.

What Does Ren Do?

Functionally, Ren allows DeFi users to swap tokens between any two supported blockchains in a single user transaction, after which all other stages are handled automatically. This functionality is realized through three different types of transactions. Since its initial launch, Ren has expanded its support to the tokenization of BTC, Bitcoin Cash (BCH), Dogecoin (DOGE), and Zcash (ZEC) on major networks such as ETH, Polygon (MATIC), and Solana (SOL). The project has seen significant adoption amongst decentralized exchange (DEX) applications such as Curve Finance (CRV), and other DeFi bridges such as BadgerBridge owing to its ability to provide cross-chain liquidity and trading functionality.

Ren was integrated with Curve to provide users with the ability to deposit and earn trading fees on native (unwrapped) BTC and serves as a low-slippage pool for swaps between BTC and Wrapped Bitcoin (WBTC). The integration provides DeFi applications such as Compound (COMP) with the ability to offer new financial products. DEX aggregators such as 1inch (1INCH) are also able to make use of the Ren pool by using it to swap BTC to other tokens through WBTC.

On BadgerBridge, the Ren network has been used to enable the deposit or swap of native BTC into a variety of tokenized BTC assets. By integrating Ren, the BadgerDAO team seeks to develop a more accessible bridge between BTC and ETH DeFi applications.

Who Is Behind Ren?

Ren was founded by CEO Taiyang Zhang in 2017. Since graduating with a degree in computer science from The Australian National University (ANU) in 2014, Zhang has been involved in a variety of projects across the crypto space. He also co-founded the crypto hedge fund Virgil Capital, and previously co-founded Neucode, a software and web development startup.

COO Michael Burgess was trained in finance and holds experience designing public policy and regulatory frameworks for an international accreditation body. Other members of the Ren team include CTO Loong Wang, who previously served as a researcher at ANU after his graduation, and developer Jaz Gulati, who co-founded Neucode with Zhang. The Ren project has attracted significant interest from institutional investors, and has to date raised $34 million from the likes of Polychain Capital and FBG Capital. 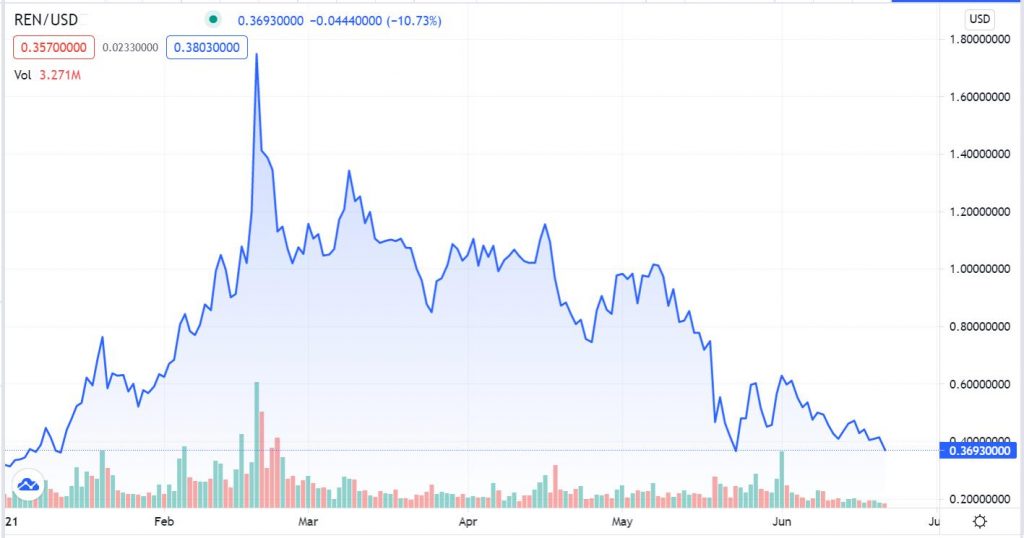 Ren is currently ranked #135 by market cap with roughly 997 million REN in circulation. The token has a fixed supply of 1 billion, of which 60.2% was sold off to investors and the public in 2018. Of the remaining supply, 19.9% was allocated to a reserve fund, 9.9% was issued to Ren advisors, founders, and team members, and 10% was allocated for development.

As all transaction fees on the network are paid out in the corresponding minted (or burned) token, the sole purpose of the REN token is for Darknode collateralization. As such, the price movements of REN more closely reflect general market trends rather than the fortunes of the network itself. Currently, 18.3% of the REN supply is locked up in Darknode collateralization.

The Ren network has been growing at a strong pace, and has experienced a steady stream of integrations across a variety of DeFi applications. As of May 28, 2021, the network reported that it had been used to provide over $5 billion of liquidity and generated over $8 million in fees over 10+ blockchains and integrations.

The project remains highly active and has added new bridges to MATIC, Fantom (FTM), and Avalanche (AVAX) alone over the past month. As the project continues to expand its support for more networks, increased adoption should follow from DEX applications seeking to access liquidity, thereby realizing the network’s value proposition as a decentralized dark pool.

More so than most projects, the fortunes of the Ren network are largely tied to the DeFi applications it empowers. A significant downturn in DeFi volume could severely hurt Darknode operators, meaning the network may soon be tested by the recent crypto bull run.

Many DeFi projects are still looking for satisfactory interoperability solutions, which represents both room for growth and competition. The network still faces a fierce challenge from a large number of other interoperability projects as a clear winner has yet to materialize.