What is Bancor Network: A Pioneer in The DeFi Field

Launched in 2017, Bancor (BNT) is a decentralized finance (DeFi) project seeking to solve the illiquidity issue faced by non-mainstream cryptocurrencies that lack supply and demand among exchanges. BNT trades at $3.3 per token with a capped supply of 230 million, for a total market cap of $760 million. 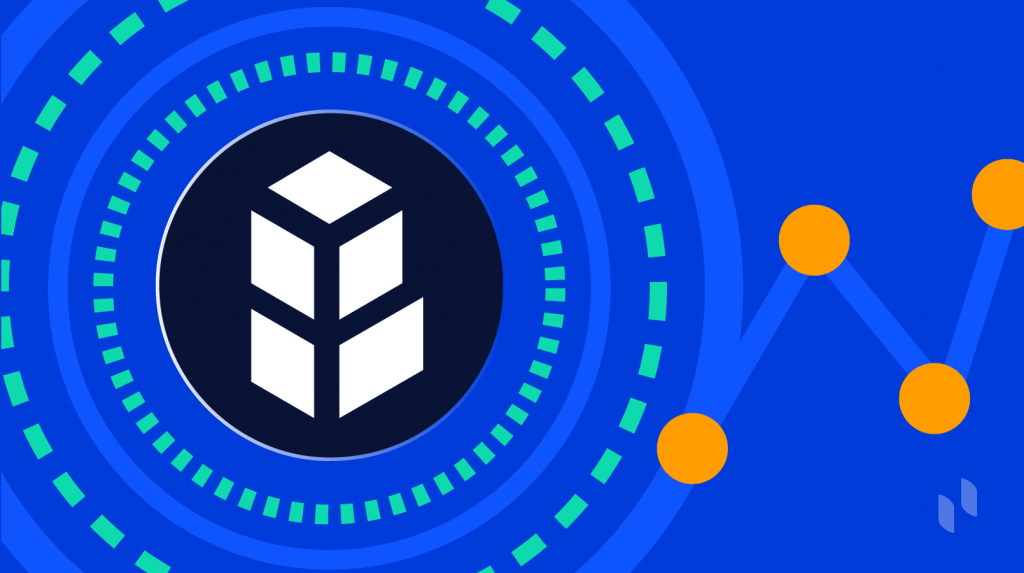 What Is the Bancor Network?

A token’s liquidity depends on how easily a user can acquire or sell the token at any given time. Less popular and unestablished tokens face liquidity issues, as these crypto assets have yet to attract enough attention in the market. As a result, they lack supply and demand, making it difficult for investors to exchange them.

The Bancor project aims to solve this by providing support to illiquid cryptocurrencies in the market through the Bancor Network. The network is one of the first decentralized exchanges (DEX) built on Ethereum (ETH) and EOS blockchains. As a result, Bancor supports both ERC-20 tokens and EOS tokens. In addition, Bancor implemented the first blockchain-based automated market maker (AMM) smart contracts on the network to manage the direct and on-chain conversion of cryptocurrency without needing exchanges.

Bancor’s AMM-based DEX pioneered the use of liquidity pools, where each pool is a market for a particular pair of crypto assets. Liquidity providers set the initial price and supply of each pool and provide the tokens. The AMM smart contract ensures that a pool’s total liquidity remains the same through automated trading based on a pricing algorithm. Bancor uses oracles like Chainlink (LINK) that relay prices from external sources to retrieve the correct prices for each trading pair.

What Does the Bancor Network Do?

The Bancor Network offers two DeFi services to users – cross-chain token swaps and liquidity mining. Similar to Uniswap (UNI) and other DEXs, users can exchange tokens in over 10,000 trading pairs and earn incentives by providing liquidity to the token pairs on Bancor. However, compared to other AMMs, the Bancor Network presents two unique features to liquidity pools:

Who Is Behind Bancor?

Eyal Herzog, Yudi Levi, and Guy and Galia Bernartzi founded Bancor in 2017. Prior to the project, Herzog and Levi co-founded the Bancor Foundation, the Swiss institution that oversees the development of the Bancor Network. The foundation offers grants and technical support to developers and organizations looking to build applications with the Bancor Protocol.

Eyal Hertzog is currently Bancor’s Product Architect. He has more than 10 years of experience in product development. Before Bancor, Hertzog co-founded Metacafe, a top Israeli video sharing site, and AppCoin, a company developing a blockchain-based cryptocurrency for mobile app stores.

Yudi Levi is Bancor’s Chief Technology Officer (CTO). He is an experienced software developer and engineer. Levi served as the Chief Architect in technology companies Mytopia and Particle Code. He is also the former CTO of AppCoin, which he co-founded with Hertzog and Guy Benartzi.

Guy Benartzi joined Bancor Foundation in 2017. He has plenty of experience managing companies, having co-founded Mytopia, Particle Code, and AppCoin. He is the former Chief Executive Officer (CEO) for Mytopia and AppCoin.

Galia Benartzi is Guy Benartzi’s sister and joined the Bancor Foundation in 2017. She is currently Bancor’s Business Developer. She co-founded Particle Code alongside her brother and served as the company’s CEO. She is also the former Vice President of Business Development for Mytopia.

Bancor has only disclosed one funding round since its inception. The project raised around 397,000 ETH (worth $153 million at the time) in an initial coin offering (ICO). The ICO was held on June 12, 2017, with notable participants such as Tim Draper from Draper Fisher Jurvetson and Blockchain Capital.

BNT’s price rose slowly from the beginning of 2021 until the end of February, where it received a generous boost that propelled its price by 400%, from $1.3 on January 1 to $6.5 on February 21. After a price correction, BNT’s price rebounded and spiked from $4.8 on March 1 to $9.1 on March 9. The price increase was possibly fueled by recent announcements regarding Bancor Network’s new vBNT burn mechanism and gasless voting proposal.

The price then corrected itself again and dropped. BNT’s price then hovered within a range of $7 to $8, until mid-May where the price dropped drastically following negative cryptocurrency headlines. BNT now trades at $3.3, which is around 40% of its May 9 peak. 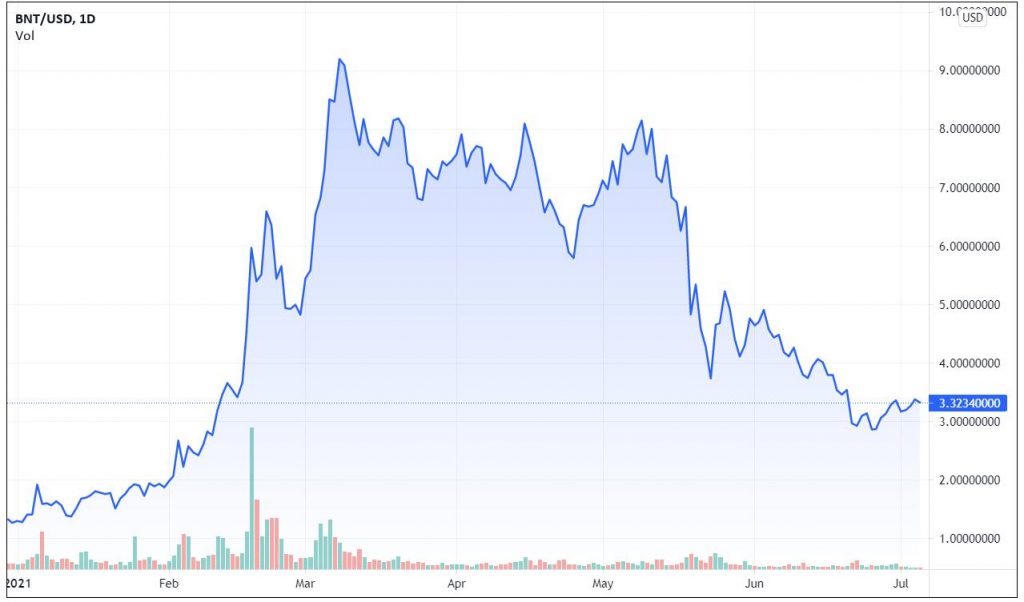 BNT is currently ranked #86 by market cap. The token has a total supply of 230 million tokens, of which all are in circulation. The BNT supply is unlimited and elastic. The supply increases or decreases depending on the network’s impermanent loss protection and single-sided liquidity. According to the figure below, the network is constantly minting and burning BNT tokens where the minting rate is higher than the burning rate. As a result, this may have an inflationary effect on the token.

The total BNT supply with the number of tokens minted and burned since November 2020 (Source: Dune Analytics)

What Is the Future for Bancor?

Bancor invented the world’s first blockchain-based AMM-style DEX as an alternative to the order books used by many cryptocurrency exchanges. This shows that the team behind Bancor is innovative. Recent upgrades to the network also gave Bancor the capability to offer unique features to the network and its liquidity pools, such as the previously mentioned single-sided liquidity and impermanent loss protection. However, one disadvantage of its impermanent loss protection feature is that it is funded with BNT inflation, thereby making the token less scarce and lowering its value over time.

Is The Bancor Network a Good Investment?

The Bancor Network has a very good distribution of tokens compared to other DeFi projects and boasts more than 10,000 trading pairs. However, every trading pair on the Bancor Network requires BNT as a reserve when creating or contributing to a liquidity pool. This requirement created a bottleneck that has hindered adoption and discouraged users from providing liquidity. Additionally, users cannot simply list any pair of tokens on the network, as Bancor has to whitelist the new token pairs first for security purposes.

Nonetheless, the future looks bright for Bancor. The new features introduced by the network have brought in a large number of unique users. Additionally, Bancor announced that it is testing its contracts on a Layer2 solution to solve network congestion issues.

Bancor is a pioneer in the DeFi space because it created one of the first DEXs on Ethereum and invented the first AMM as an alternative to order books. The Bancor network offers cross-chain token swaps and liquidity mining in liquidity pools. Users can exchange tokens in more than 10,000 trading pairs or provide liquidity to the token pairs to earn rewards. To keep up with the ever-changing landscape of DeFi, the Bancor team proposed and implemented various features such as single-sided liquidity and impermanent loss protection. Even though the platform lacks transaction volume, the new features and future Layer2 solution might give the Bancor network a boost in this aspect by attracting new users and lowering the gas fees.