What is Horizen: A Private and Secure Platform for Enterprises

Launched in May 2017, Horizen (ZEN), formally known as ZenCash, is a privacy-based and scalable platform with an ecosystem supported by the largest node network in the industry. The platform focuses on providing businesses and developers with a fast and affordable way to create their own public or private blockchains. ZEN trades at $56 per token with a circulating supply of around 11 million, for a total market cap of $640 million. 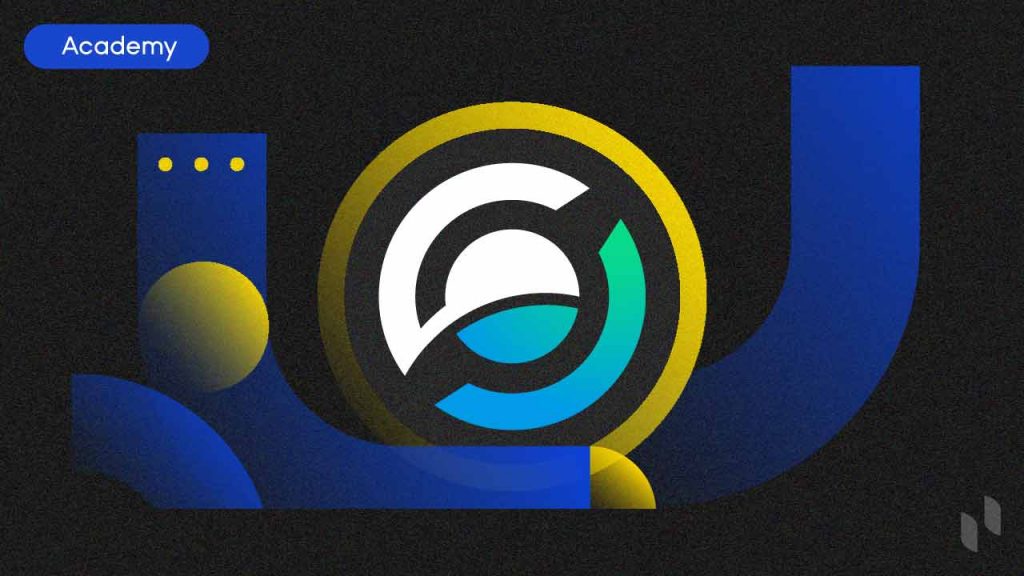 How Does Horizen Work?

The Horizen Network utilizes blockchain technology’s two most common consensus algorithms – Proof of Work (PoW) and Proof of Stake (PoS). For consensus, the network’s mainchain uses the PoW algorithm while the sidechains employ a modified version of the PoS protocol.

Horizen proposed and implemented this sidechain model with decoupled consensus between chains in 2018. The primary purpose of this model is to conduct secure and decentralized cross-chain transfers without requiring the mainchain nodes to track sidechains to verify them.

Horizen relies on a multi-tiered node system, in which the project touts as the largest node network in the industry. As of the time of writing, there are about 45 thousand active nodes in Horizen’s network. Additionally, this node network is geographically diverse and, thus, decentralized. The project also claimed that its node network is the first to integrate TLS end-to-end encryption between nodes.

According to Horizen, it utilizes this massive and geographically dispersed node system to improve its network’s scalability, reliability, security, and speed. There are three node types, which are regular full nodes, Secure Nodes, and Super Nodes. The details about each type are as follows:

As previously mentioned, Horizen is formerly known as ZenCash. ZenCash was forked from ZClassic, which was forked from ZCash, a Bitcoin (BTC) clone. Consequently, Horizen inherited zk-SNARK (Zero-Knowledge Succinct Non-Interactive Argument of Knowledge), ZCash’s privacy technology, which is a specific type of zero-knowledge proof technology wherein it mathematically proves and shows users that transactions took place without revealing any other information. With zk-SNARK, Horizen manages to offer scalable and privacy-based solutions without compromising on decentralization and security.

What Does Horizen Offer? 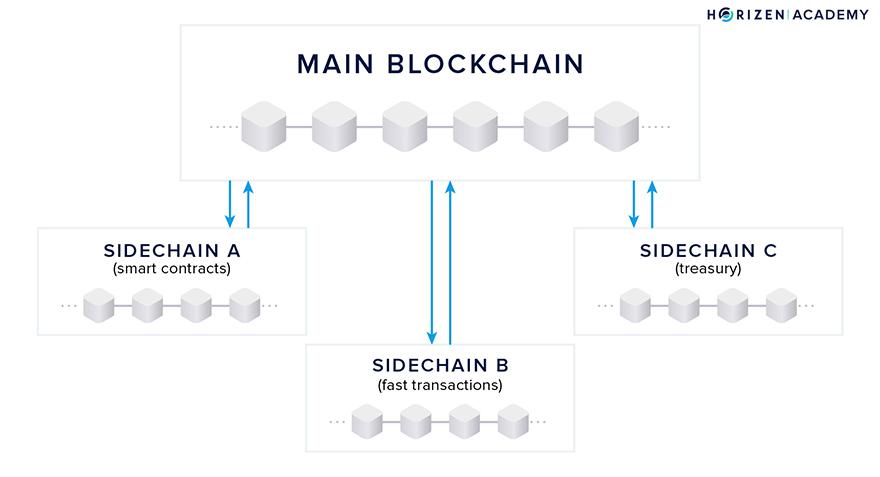 Horizen offers decentralized, scalable, secure, and privacy-based solutions with a focus on enterprise applications. The project has evolved since its ZenCash days and now provides Zendoo, a revolutionary sidechain infrastructure that solves scalability issues such as slow transactions and high fees. Currently, Zendoo is live on Horizen’s testnet and has yet to arrive on the mainnet.

The sidechains are separate and independent blockchains running in parallel to the mainchain. They provide extra functionalities to support the mainchain without compromising speed and stability. As a result, Horizen can provide businesses and developers with a quick and inexpensive way to create blockchains and DApps on Horizen’s network. Horizen has multiple partners such as Celsius Network (CEL) and IOTA (IOTA).

What is the ZEN Network?

Horizen also offers ZEN, its native cryptocurrency, to miners, node operators, and validators. The network rewards freshly mined tokens to both the miners providing power to solve PoW calculations on the mainchain and the validators on the PoS sidechains. Besides its role as a mining reward, ZEN has an optional privacy feature that users can use to control their digital footprint. ZEN offers this feature by providing two different types of addresses, which are:

Who Is Behind Horizen?

Robert Viglione and Rolf Versluis co-founded Horizen in May 2017. The Horizeon project is governed by the Zen Blockchain Foundation, a non-profit organization responsible for managing the core team in terms of blockchain development. In addition, the two co-founders co-wrote the original Whitepaper with Jane Lippencott, a cryptocurrency venture capitalist.

Rob Viglione is the current Chief Executive Officer (CEO) of Horizen Labs. He is also the co-founder and President of the Zen Blockchain Foundation. Prior to the Horizen project, he worked as a software project manager for the US Air Force and as an analyst for Tecolote Research and Lanmark Technology. Viglione holds a PhD in Finance from the University of South Carolina, an MBA in Finance and Marketing, and a Bachelor’s in Physics & Applied Mathematics. He is also a former advisor for Aave and HeroEngine.

Rolf Versluis is currently the Executive Advisor of Horizen. He worked for Cisco Systems in the semiconductor industry and served as a Navy Officer in the US Submarine Force. Versluis also founded North Georgia Crypto Mining, a cryptocurrency mining service provider, and now works as an operator and technical consultant for cryptocurrency mining facilities. He has an Electric Engineering degree from the US Naval Academy and took up Nuclear Engineering Training under the US Navy Nuclear Program.

Jane Lippencott is a former member of the founding team. In addition, she is a former associate in Winklevoss Capital, where she invested in multiple cryptocurrency companies such as Chainlink, Aave, and Synthetix. Lippencott is currently a 2021 VC Cohort at All Rise, an advisor for Teller Finance, and a mentor for CeloCamp, the Open Web Collective, and Gitcoin. She holds a Bachelor of Arts in Administration from the Darla Moor School of Business.

Horizen has never held an Initial Coin Offering (ICO). However, Grayscale Investments, a company that manages cryptocurrency investment funds,  created a new fund focused on Horizen. In 2018, Grayscale purchased a number of ZEN tokens worth $6.3 million at the time for their Horizen Trust.

ZEN’s price grew by more than 1500%, from $5 in November 2020 to $81 in mid-February 2021. The rally between February 9 to February 19, in particular, possibly occurred following news of partnerships and cryptocurrency exchange listings. Unfortunately, ZEN’s price soon corrected itself and fell by around 40% to $42 a few days later.

Like most cryptocurrencies, the token’s price gained ground during the cryptocurrency market’s bullish run. At this time, ZEN’s price rose 250% to its all-time high of $147 on May 19. However, the price plummeted the next day. Now, ZEN trades at $56, which is around 40% from its historic peak. 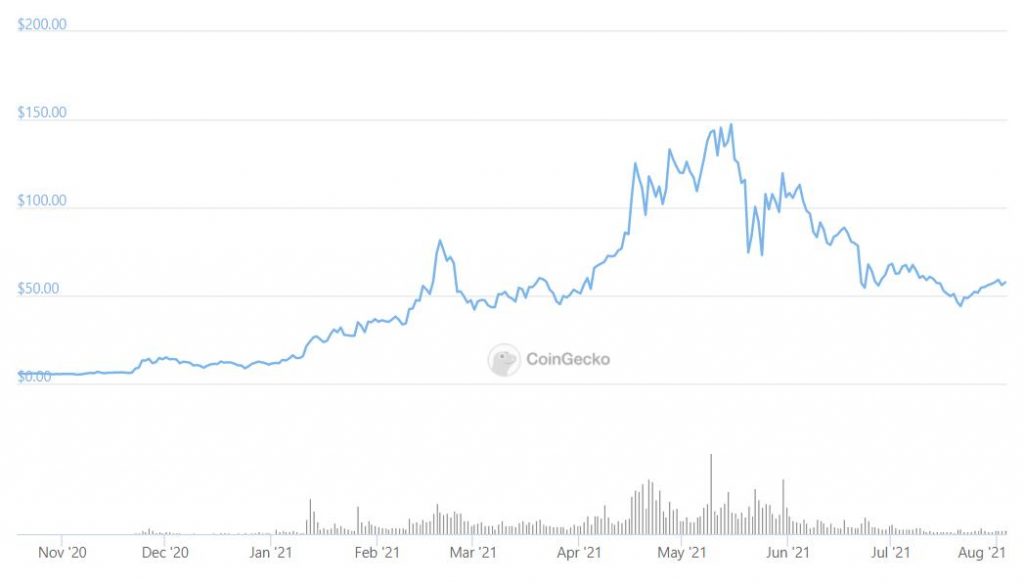 Is ZEN Coin a Good Investment?

ZEN is ranked #110 by market cap. Similar to Bitcoin (BTC), the ZEN token has a total supply of 21 million and runs a periodic halving of block rewards. The first halving event took place in December 2020, where the number of Horizen rewards generated per block reduced from 12.5 ZEN to 6.25 ZEN. As previously mentioned, miners and node operators receive the freshly mined tokens as a reward. Of the total block reward, 60% is for miners, 10% for Secure Node Operators, 10% for Super Node Operators, and 20% is for the Horizen Decentralized Autonomous Organization (DAO) Treasury.

What Is the Future for Horizen?

As previously mentioned, Zendoo is still on the testnet. According to Horizen’s roadmap, the team expects to transition the sidechain protocol to the mainnet in the third quarter of this year. Once Zendoo arrives on the mainnet, it would mean that the project delivered its promises, and the value of the ZEN token might rise following such news.

There is news that a major cryptocurrency exchange in the US is looking to support ZEN on its platform. Historically, cryptocurrencies on this exchange generated considerable buzz and enjoyed a boost in price when they are freshly listed. If ZEN passes the strict technical and compliance review, the token might experience a short bullish run once it is listed.

Horizen is currently one of the 13 institutional-grade investable projects on Grayscale. The managing director of Grayscale stated that Horizen utilizes superior technology and has a good team behind the project. He believes that companies that use blockchain technology will pay a premium for privacy-based applications in the future. The support Grayscale has shown towards the Horizen project generates confidence among traditional enterprises. Due to this confidence and the project’s massive node network, there is a high possibility that Horizen will be the first choice for enterprises looking for a decentralized, scalable, secure, and privacy-based blockchain solution.

Horizen, formerly known as ZenCash, is a decentralized and scalable platform that focuses on providing businesses and developers with a fast and affordable way to create their own blockchains and DApps. The project relies on Zendoo, its sidechain protocol that creates separate blockchains. These separate blockchains supplement the capabilities of the mainchain without compromising speed and stability, thereby allowing the quick creation of affordable blockchains and DApps. Additionally, the project utilizes the largest node network in the industry for transaction verification and leverages zk-SNARK, a type of zero-proof cryptography that boosts privacy and security. The project has potential as it is supported by Grayscale Investments, a leading digital currency investment institution. This support generates confidence among traditional enterprises which may opt for Horizen when choosing a blockchain solution.