What is Mobile Mining: Mine Crypto on A Phone

Mobile mining is one of the most exciting recent tech innovations for creating digital currency tokens. Mobile mining is the creation (i.e. mining) of cryptocurrencies using just a smartphone whereas traditionally it requires elaborate setups of Graphics Processing Units (GPUs) and Application-Specific Integrated Circuits (ASICs) that consume a lot of power. Mobile crypto mining is enabled through applications like MinerGate, Mobile Miner, and Bitcoin Miner. 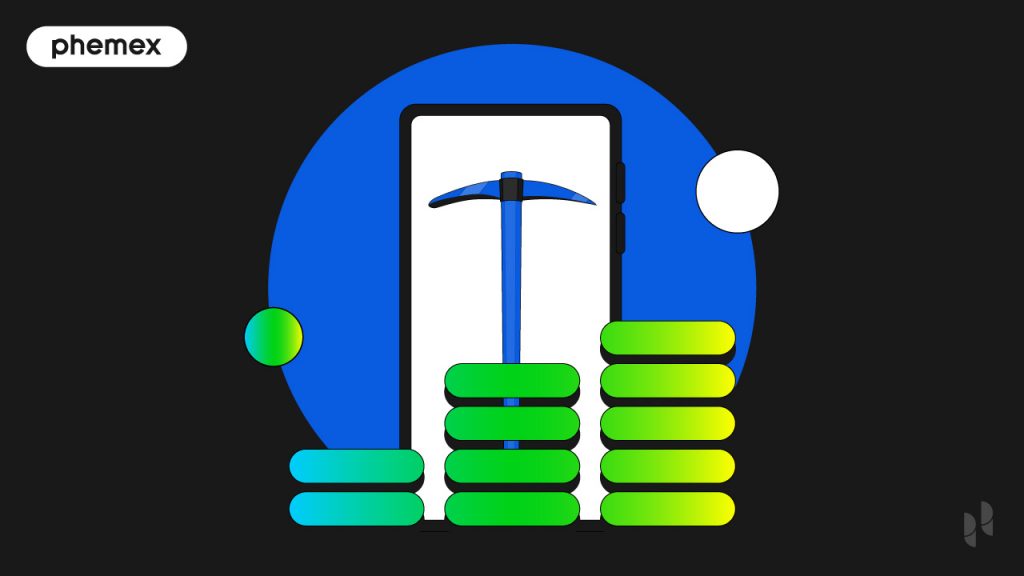 Can you Mine Crypto on Mobile?

It is technically and theoretically possible to mine the most prominent cryptocurrencies on a cellphone like Bitcoin (BTC) and Ethereum (ETH). However, how feasible it actually is for your time and money is another question.

Below is the list of the most prominent cryptocurrencies that can be mined through various mobile applications on your phone:

There are also cryptocurrencies like Pi (PI) and Electroneum (ETN) that are virtually free to mine through its “energy light” mobile applications available both on Google Play Store and iOS. This category is known as simulated mobile mining as it can be considered as more of an airdrop that requires some of your periodical attention. Although, there have been some allegations connecting these applications to personal data leaks that have impacted 10,000 Vietnamese Pi Network users.

How To Mine BTC On Your Phone

Bitcoin mining apps like MinerGate and Bitcoin Miner allow you to mine BTC on your phone, however, it is a highly time-consuming process. The main issue is computing power because even the most sophisticated mobile phones in the market have poor performance when compared to traditional cryptocurrency mining setups.

How long does it take to mine 1 Bitcoin on a phone?

There is no way to mine just one Bitcoin on a phone because you would need to mine one block just like traditional miners do. Currently, mining a block of BTC is rewarded by 6.25 tokens per block. However, this reward changes periodically every four years when it gets reduced by half, a phenomenon known as “Bitcoin Halving.” This reward changes every time 210,000 blocks of the token are mined.

The mining hash rates for smartphones range from anywhere between 4 H/s to 50 H/s. Comparing this to traditional cryptocurrency mining setups that have a hash rate of 950 TH/s, i.e., 950 trillion hashes per second, it is evident that mining BTC using only cellphones is a difficult task.

In order to attempt to achieve “economies of scale” you could also join mining pools that allow you to combine the computing power required to mine proof-of-work (PoW) cryptocurrencies like Bitcoin. These pools contain a group of miners that participate in block creation and facilitate transactions on the network. The most important aspects of pooled mining are the reputation, type, size of the pool that you choose as it goes on to impact the pool fees, and the compensation mechanism used to reward your contribution to the network.

How to Mine Crypto On a Mobile Phone?

Cryptocurrencies can be mined on mobile phones using mobile applications available for both Android and iOS systems. However, most of these applications can’t be found on the Google Play Store or the iOS App Store since both these companies have policies that don’t allow any applications on their store to consume excessive resources on the device, be it battery life or computing power. Therefore, you would need to download these applications from third-party applications whose credibility needs to be thoroughly checked before using them.

In an experiment to gauge how profitable cryptocurrency mining on Android phones can be, Youtuber TechWizTime attempted to mine Monero (XMR) using a combination of three OnePlus 5T phones, one Xiaomi Redmi 5 Plus, one Bluboo S8 Plus, one Lenovo Tab4 Plus Tablet, and one Umidigi S2 cell phone. A total of seven devices mining gave him a mining hash rate of 110 H/s, which means that he would make $0.78 a week with this setup. Accounting for the electricity costs and the cost of devices worn out due to excessive use over time, it is highly unlikely that this would be a profitable investment choice to pursue.

Joining mining pools like Poolin, AntPool, F2Pool, BTC.com, and ViaBTC will help you share the computing power burden with other stakeholders with the rewards being proportional to the computing ability you contribute to the pool.

What Are The Pros and Cons of Mobile Mining?

While at the outset mobile mining may seem like a convenient option to mine cryptocurrencies, the vast difference in computing power required to make it a profitable proposition is what makes mobile mining an unfeasible option for serious miners looking to profit. In fact, back in April 2020, when HTC announced that they would allow Monero (XMR) mining on their cellphone, Vitalik Butertin, the co-founder of Ethereum, had stated that mining cryptocurrencies on smartphones is a “Fool’s game.”

However, to assess the benefits and drawbacks in detail, here is the list of pros and cons of mobile crypto mining that you need to be aware of.

Cryptocurrency mobile mining is possible, but like mentioned above, it comes with a long list of reasons not to do it. Mining on your smartphone does not come close to traditional mining hardware or software. Under the current state of mining cryptocurrencies, doing it on mobile might not bring interested persons enough profits to be worth the time, effort, and resources.