What Are the UTXO and Accounts Models?

Both the UTXO (unspent transaction output) and accounts models are methods of cryptocurrency record-keeping used to represent the number of tokens someone has remaining after executing a transaction on the blockchain. These models are a key method in which blockchain architecture maintains an accurate ledger while ensuring privacy. What Is the UTXO Model?

The easiest analogy for UTXOs is physical fiat currency. Just like how coins or notes cannot be split into smaller denominations, a UTXO cannot be divided either. One can think of a UTXO as a discrete (indivisible and unique) chunk of its corresponding token controlled by the private key of its owner.

The UTXO model is used by projects such as Bitcoin (BTC), Bitcoin Cash (BCH), Litecoin (LTC), and Zcash (ZEC) among others. The collection of all existing UTXOs at any given point is called the UTXO set. Any transaction performed on the blockchain can be viewed as a modification of the UTXO set.

How Does a UTXO Transaction Work?

Unlike physical currency, a single UTXO could represent 5 BTC, 479.2 BTC, or anything in between. The tokens held in a user’s wallet represent the total amount of UTXOs under their ownership. Moving onto the blockchain, let’s instead consider what would happen if Bob wanted to send Alice 3.7 BTC:

The easiest analogy for the account model is a debit card or bank account. Unlike physical fiat currency that cannot be split into smaller denominations, an account model supports the credit (or debit) of any arbitrary amount of the token. While UTXO wallets represent the total sum of a user’s UTXOs, an account model wallet simply represents the user’s aggregate balance.

The account model is used by projects such as Ethereum (ETH), Ethereum Classic (ETC), and Ripple (XRP) among others. Unlike the UTXO model, transactions represent a single transfer of funds between accounts, and no additional inputs or outputs are necessary. All that’s required is a change on the ledger.

The balance of each account is stored on the blockchain. Account model blockchains execute transactions simply by reducing the balance of one account, then increasing the balance of the recipient by the corresponding amount. Let’s see how the previous example would differ if Bob instead wanted to send Alice 3.7 ETH. 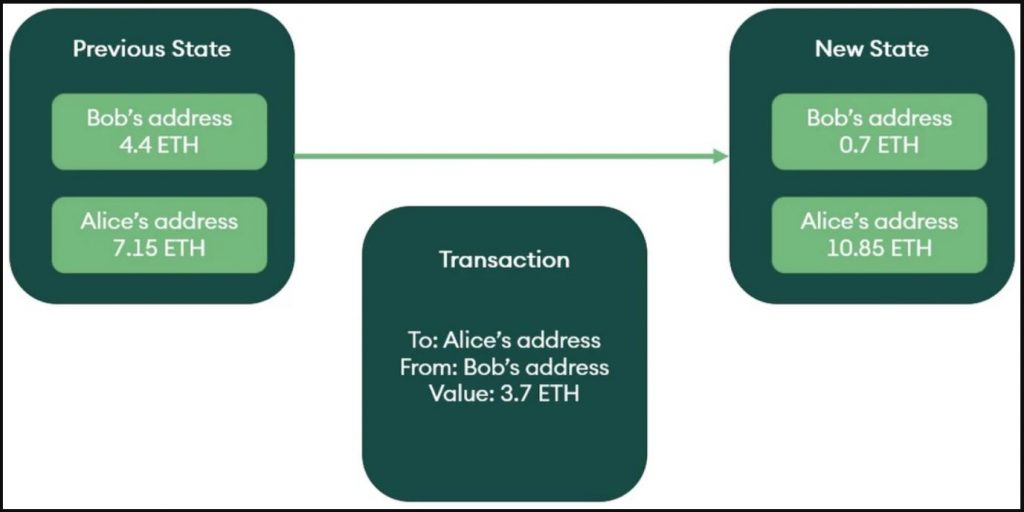 What Are the Differences Between the UTXO and Account Models?

While both the UTXO and account models serve the same goal of keeping record of wallet balances in a blockchain network, they each come with a distinct set of advantages and disadvantages:

As both models feature different advantages and drawbacks, their applications in any given blockchain depend largely on what the project is trying to do. Ethereum uses the account model as it focuses is on the deployment of powerful smart contracts, while Bitcoin uses UTXO as it is more concerned with the development of electronic cash.

Newer projects are seeking to further innovate on these models. Cardano (ADA), Tron (TRX), and Qtum (QTUM) among others have sought to combine the advantages of both into advanced hybrid models. These models make it easier for developers to utilize UTXO without giving up the power of smart contracts.

An example is Cardano’s extended UTXO (EUTXO) model, which provides the ability to develop smart contracts while also retaining parallel processing functionality. The model also adds data fields to the outputs of each transaction, which allows information to be linked much in the same way as a smart contract.