How to Trade with The Fibonacci Retracement Levels

The Fibonacci series is a sequence of numbers that follows a specific rule: each number in the series is the sum of the previous two numbers. Starting with just two numbers, zero and one, the Fibonacci sequence is infinitely long and, despite being so rigid and predictable, is found almost everywhere. 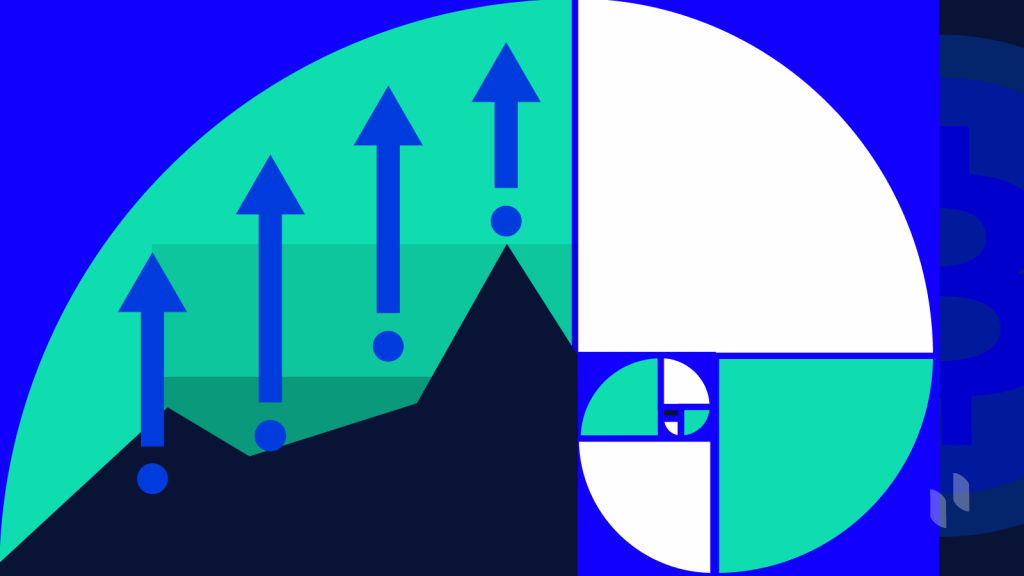 Use of Fibonacci Retracement

Besides being a fundamental and handy tool in the field of mathematics, the Fibonacci sequence has also been observed in biological structures. From tree branches and leaves on a stem to pine cone arrangements and honeybee family trees, the Fibonacci series is around us in abundance and impacts us in ways that aren’t always obvious.

Scientists and mathematicians have even observed how the ratio of consecutive pairs in the series converges toward the Golden Ratio, an irrational constant also known as the Divine Proportion. Dramatic labels aside, the Golden Ratio is also suspiciously ubiquitous in our surroundings.

There are various explanations for the Fibonacci sequence and golden ratio’s frequent occurrences, but the most popular one is just that it’s a convenient growth function. It explains why certain organisms grow and reproduce the way they do, how right-angled triangles scale with area, and even the rise and fall of market prices. Sometimes.

Fibonacci Retracement in The Crypto Markets

What are Fibonacci Retracement Levels?

Fibonacci Retracement Levels are horizontal lines that denote support and resistance levels for a particular asset’s price chart. The lines are drawn based on the Fibonacci sequence and are found at different levels depending on the starting and ending prices. Each level is denoted by a percentage, which is how far the price has retraced.

The indicator allows traders to draw between major price points to extract significant support and resistant levels quickly. Most implementations use the 23.6%, 38.2%, 61.8%, and 78.6% levels, but the 50% level is also used despite not being an official part of the Fibonacci series. Traders mark these levels because they have historically shown relevance in trading markets.

If nature includes everything it comprises, then markets, too, fall victim to the Fibonacci sequence’s laws. At least, that’s the context in which the indicator is used. Historically, the application Fibonacci retracement levels show some surprisingly accurate results. The levels Prices consistently stall or reverse at these levels, creating zones of tense observation for any vigilant day-trader.

However, these zones are not always accurate and leave room for error above and below each level. The levels can also be used to place entry orders, calculate stop-loss points, and even to set price targets. When an asset moves up or down in value, it tends to trace these levels, bouncing off and shuttling between them as the price fluctuates. This is especially notable in the more volatile cryptocurrency markets, where prices tend to retrace at these levels more often.

Unlike indicators like moving averages, Fibonacci retracement levels do not change. They are static in nature and allow traders to quickly and easily identify them for any given period. Investors also use them to anticipate and react quickly when the price tests these levels, creating inflection points where either a reversal or a break is expected.

The Fibonacci retracement indicator isn’t the only place traders use the Fibonacci series. In fact, the sequence is prevalent in various technical analysis methods, such as Gartley patterns and even the Elliott Wave theory.

Following significant price movements, technical analysis shows that Fibonacci levels consistently produce reversals when the price approaches them. This indicator isn’t 100% accurate but combined with other signals from indicators like the RSI and the Ichimoku Cloud, it can be incredibly helpful in finding profitable entry and exit trade points.

The Fibonacci retracement indicator is interesting not only because it predicts potential support and resistance levels but because it also provides a sort of self-fulfilling prophecy to those who trade it. The indicator is so widely recognized that individual traders base their buying and selling patterns on it, subconsciously playing to its tune instead of the other way around.

However, that doesn’t make them any less relevant. In fact, the larger the market, the greater the likelihood participants will adhere to the Fibonacci levels. For smaller markets, Fibonacci retracements aren’t as easy to observe.

How to Use The Fibonacci Retracement?

This is because broad generalizations are hard to match with small data sets. Every tree’s branching pattern may not conform to a Fibonacci sequence, but the pattern emerges much more readily across many examples. Of the various percentage levels used, the most commonly represented in cryptocurrency trading are 38.2%, 50%, 61.8%, and 100% levels. 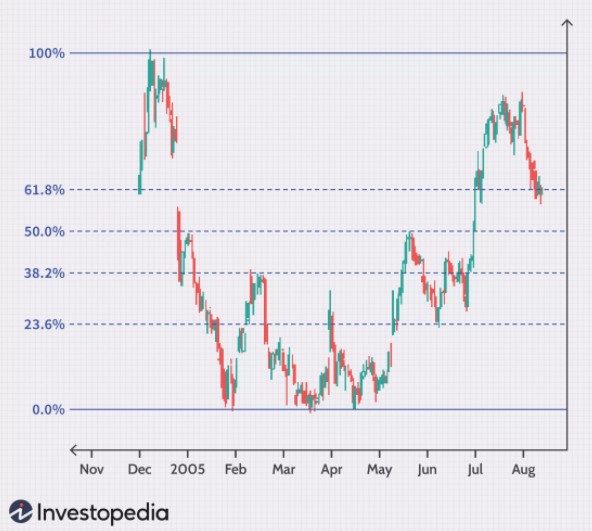 Another explanation for how Fibonacci retracement levels work is that traders have inherent psychological barriers that reveal themselves through patterns within financial markets. This has been observed through multiple instances through time, and these inflection points are where traders anticipate a bounce or a break.

However, the most crucial level of all is the one that embodies what some consider the most beautiful ratio in mathematics. The 61.8% level or the Golden Ratio represents the critical level at which sellers tend to give up hunting for bargains, and the frenzy of mass buying pressure starts to build steam.

The 61.8% level is a great point to buy after a confirmed breakout or sell after a trend reversal. The most careful traders wait for the price to move 5-10% above this to confirm the trend. This is generally a good idea due to the indicator’s slightly inconsistent accuracy, making it far from an absolute signal.

Can Fibonacci Retracement Levels Be Used With Other Trading Tools?

The Fibonacci levels are also known to bring in higher volume levels, leading to profitable trades amid the rush. While Fibonacci analysis best functions alongside other indicators, it can be used as a standalone trading strategy.

Using stop losses, traders can pre-emptively create stop-loss trades to automatically buy and sell at certain Fibonacci levels. Of course, the price has to move in the indicator’s favor to profit, but with stop losses, the ratio of potential capital loss is relatively low. While this is technically a viable strategy, the Fibonacci retracement indicator is far more useful when used along with other critical support and resistance levels.

Fibonacci levels observed at already established support and resistance levels have a strong affinity for the price. Markets often see asset prices wander close to these areas due to the high volume and liquidity at these levels. Identifying them in advance can help make more informed trading decisions.

Another useful tool is the Fibonacci Fan – an indicator based on the Fibonacci series but using a different chart representation. It works similar to the Fibonacci retracement indicator in that traders need only mark the start and end of a price movement.

However, instead of providing information on the horizontal support and resistance levels, the Fibonacci Fan provides support and resistance data for lines at various angles distanced according to the Fibonacci series. This provides a more intricate idea of the price points at which the market holds its breath, opening more opportunities for traders to make a profit.

Trading Bitcoin with the Fibonacci Levels

Countless traders worldwide use Fibonacci retracement levels to decide where to buy in during the next trading cycle. It’s an incredible tool that provides a lot of insight even to novice traders, but it’s important to remember that these levels are only points of interest. Prices gravitate to these levels naturally, but also because of their inflated perceived importance.

Concerning cryptocurrencies, it’s far more likely to see Fibonacci patterns in coins with larger market capitalizations like Bitcoin and Ethereum. This is because low volume tokens aren’t expected to have enough data to conform to a Fibonacci series.

In December 2017, when Bitcoin touched its then all-time high, BTC’s swift value decline in the days that followed closely tracked the Fibonacci retracement lines. There isn’t a concrete explanation for why the Fibonacci series made its way into trading, but it’s definitely there, so understanding it is a must.

However, external events can completely dismantle these levels. Changes in regulation and technological shifts have potentially drastic effects on an asset’s affinity for Fibonacci retracement levels. The indicator is best used as part of a more prominent analysis framework, and with how useful and popular it is, it’s sure to attract significant levels of interest.

Without using the right kind of technical analysis techniques, blindly following Fibonacci levels can be catastrophic, creating bad entry points and losses on current positions. Traders need to make sure they measure the significant short-term movements with the big picture in mind – a skill often reserved for the more experienced.

Coupled with indicators like MACD and Stochastic Oscillators, Fibonacci retracements not only create more trade opportunities but also improve the overall quality of trades. However, just as smaller datasets do not work well with Fibonacci indicators, shorter timeframes also render them ineffective.

In cryptocurrency markets, shorter time frames can present high volatility levels, a metric that often skews support and resistance levels for a particular asset. This makes it difficult for a trader to rely on the Fibonacci retracement indicator, and with how common long wicks and short-term spikes are, this can prove tedious for fast-paced traders.

As with anything worth doing, it takes skill, experience, and discipline to master Fibonacci retracement levels, and using them to conduct more profitable trades can take a long time and a lot of practice.

Frustration is part of the learning process. However, as long as you understand that the long-term rewards will probably offset the immediate costs, this frustration will eventually subside, leaving you with the ability to use the market’s psychological barriers against itself.