What Are Butterfly Patterns: Spot Reversals With Fibonacci Retracement 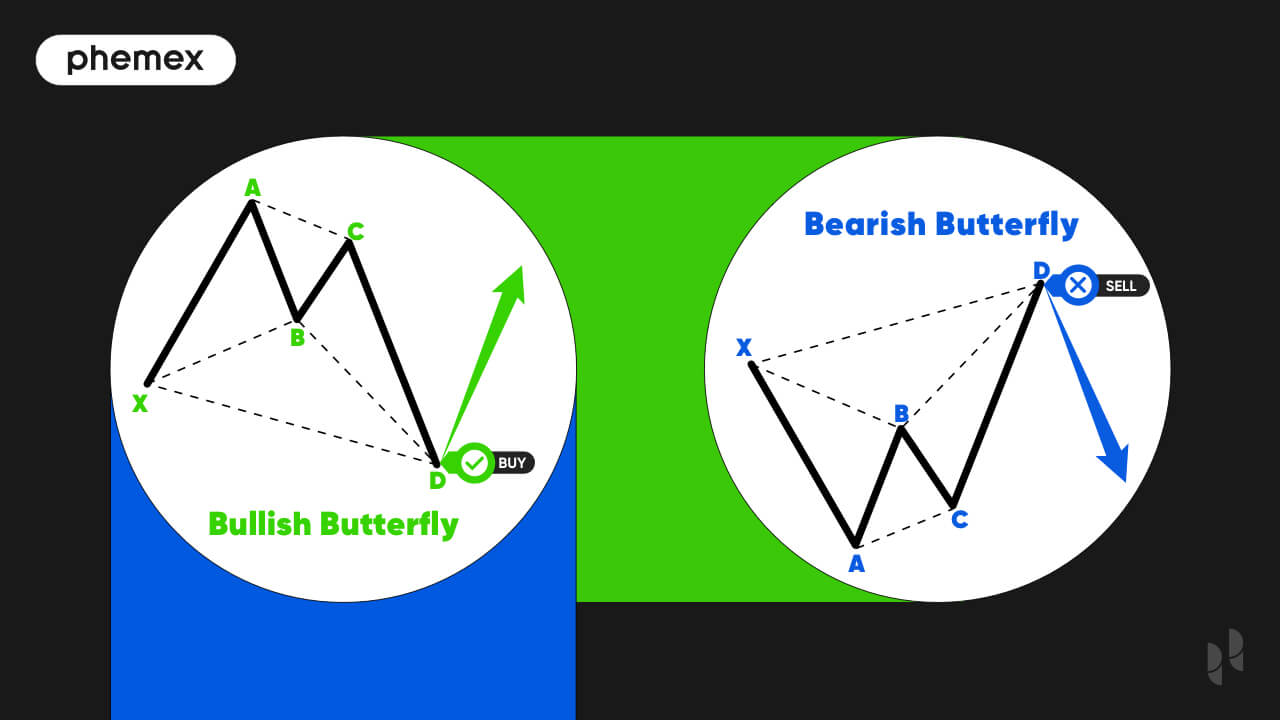 Discovering effective patterns is essential for successful trading. The Butterfly Pattern is one of the most well-known patterns. These patterns are complex, but imagine them as 4 lines with 5 end-points that dictate a bullish or bearish pattern.

Harmonic patterns are based on hard mathematics and have existed for nearly 100 years when H.M. Gartley first introduced them in 1935. As one of the most well-known names in trading, Gartley’s patterns were used in the stock markets before the introduction of computers.

This guide will break down Butterfly Patterns for crypto trading, what they mean, how to measure them, advantages/disadvantages, and how to place trades accordingly.

What Are Butterfly Patterns?

Butterfly Patterns are reversal patterns based on four lines with five end points. The fourth line, called “CD”, carries the fifth end point which dictates the reversal outcome. The name “Butterfly” is derived from the wings of a butterfly and how the lines appear on the chart.

The four lines in the Butterfly Pattern are the following:

While the specific measurements can confuse a trader due to the complexity of the measurements, all you need to do to simplify the process is compare the pattern of a crypto chart to the butterfly pattern and focus on the “CD” line or the “D” end point. 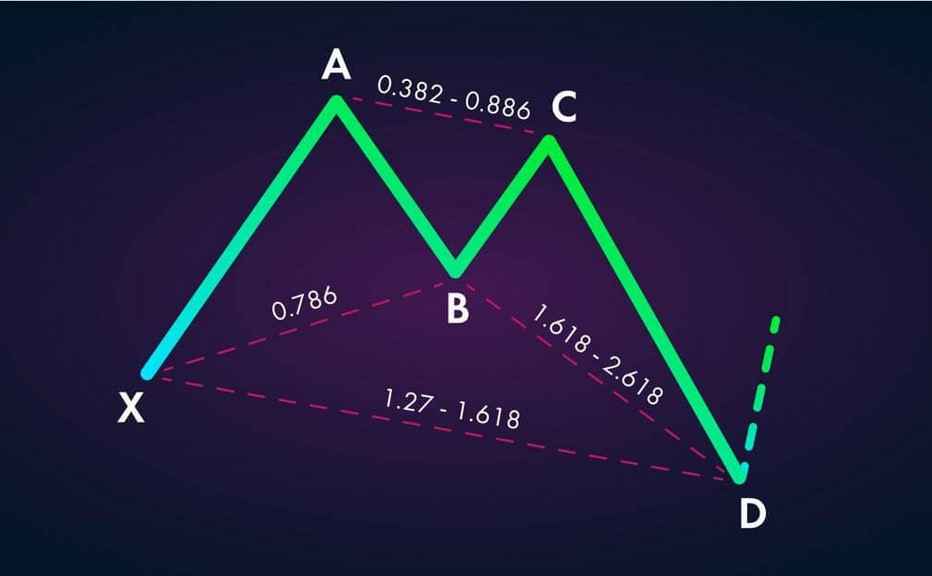 Depending on the bullish or bearish readout of a butterfly harmonic pattern, we can open long or short trades. An important thing to note is that butterfly pattern stock trading is different from crypto trading because the crypto markets are a lot more unpredictable and this trend is not as reliable for Bitcoin.

Knowing how to identify a bearish butterfly spread or a bullish butterfly harmonic pattern can help as a complementary trading tactic. If you’re using RSI, StochRSI, or other reversal-trading indicators, Butterfly Patterns can give reassurance for the trade.

How to Identify a Butterfly Pattern?

Butterfly pattern trading can be simplified to four axis lines, but the pattern structure can be interpreted in a lot of different ways. There are two butterfly patterns: Bullish and bearish. The trend line always starts at point X. 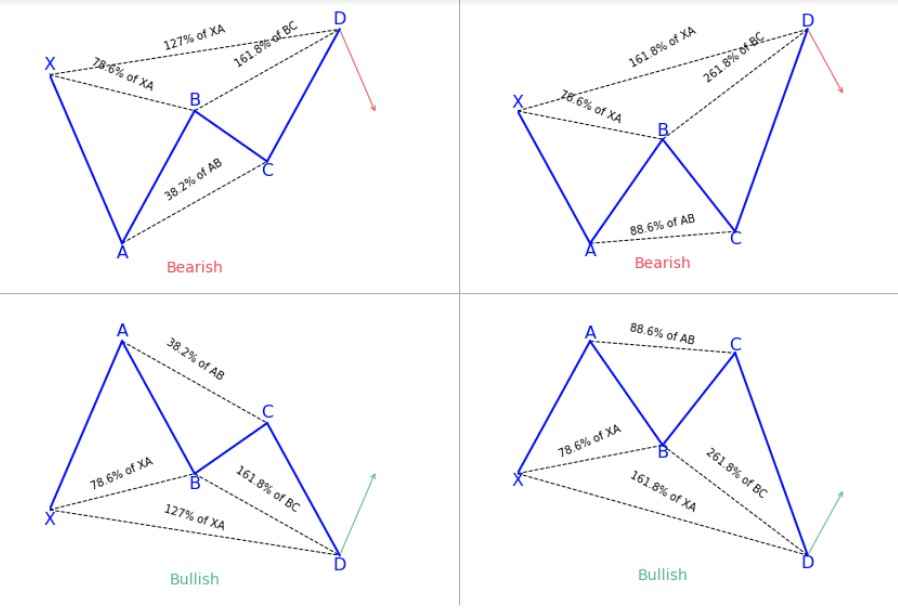 In the upper half of this illustration, we see two bearish downtrends and in the lower half, we see two bullish uptrends. A trader has to draw these trends on a crypto chart to discover the future D line movement.

Let’s say the trend from the X to A line is a downtrend as indicated in the two upper examples. We can see how the pattern shapes as a butterfly, and the final result will be a bearish reversal. The opposite applies if the trend from X to A is an uptrend. This butterfly will then cause a bullish reversal at the end.

The Bullish butterfly harmonic pattern resembles an upside-down butterfly and this often results in a bullish rally at the end.

The Bullish Butterfly will have had two rallies on the way up that were followed by corrections, and a price correction at the end. After the final correction, we hit the D line and this is often followed by the next bullish rally. A trader should open a long position at the D line of a bullish butterfly.

This Bullish Butterfly resembles the Bitcoin daily chart from the last rally to $69,000 down to the final collapse at $18,000. There were two major all-time highs that were both followed by a correction. Note that this pattern works on all timeframes.

If we identify a bullish butterfly, and the market is betting that Bitcoin is going to go down, we can place a trade that goes against the market expecting a reversal.

The Bearish butterfly pattern resembles an upright butterfly which may confuse traders as the crypto is in an uptrend at the D line. However, if we’re hitting overbought levels and the trend points upwards, it’s likely that we’re going to hit a reversal at some point and the price will correct.

Bearish butterfly patterns predict that the price will not maintain its upward trajectory, and this is followed by a correction. However, the D line has to be at an all-time high compared to the previous peaks at the X and B line. If the D line has not peaked and elevated above those points, the pattern can continue trending upwards.

A bearish butterfly is dangerous for crypto trading during a bull run because rallies can last for multiple months. However, this pattern perfectly aligns with the two peaks Bitcoin had in the rally of November 2021 when it reached an all-time high of $69,000 and collapsed over the next six months.

Stock & Crypto Markets: Where Can Butterfly Patterns Be Used?

A Butterfly pattern can be applied to any forex, stock, and crypto chart. The most common use for butterfly patterns is in the stock markets that experience lower volatility compared to crypto.

The upside of these patterns is that they can be used on any chart: 1W, 1D, 4H, 1H, 15M, etc. The same patterns apply and they are equally effective. To reduce the impact of volatility in the short term, apply the patterns on the 1D (daily) chart.

The Butterfly Patterns can be considered slightly more effective as it accounts for historic data and gives additional confirmation.

How to Draw Fibonacci Extensions?

This is where it gets difficult. The Fibonacci extension tool offered by charts on Phemex can help a trader draw the butterfly pattern.

If we open the BTC/USDT chart on Phemex, the following tool (highlighted) can be used to draw the end points from X to D: 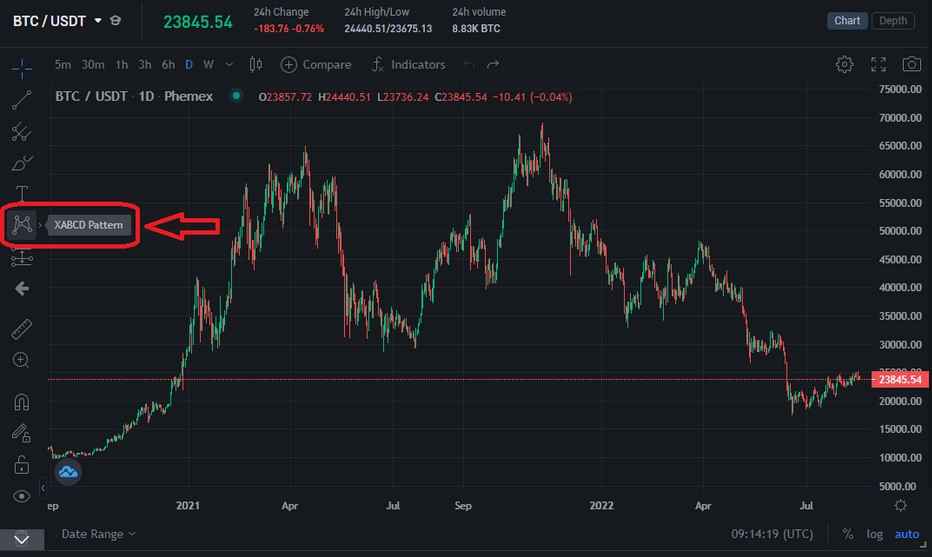 Left-click on the “XABCD Pattern” tool and pinpoint any location on the chart. The tool will automatically draw the Butterfly pattern after five clicks.

The daily chart on Bitcoin indicates a bullish pattern is forming based on the previous Fibonacci levels: 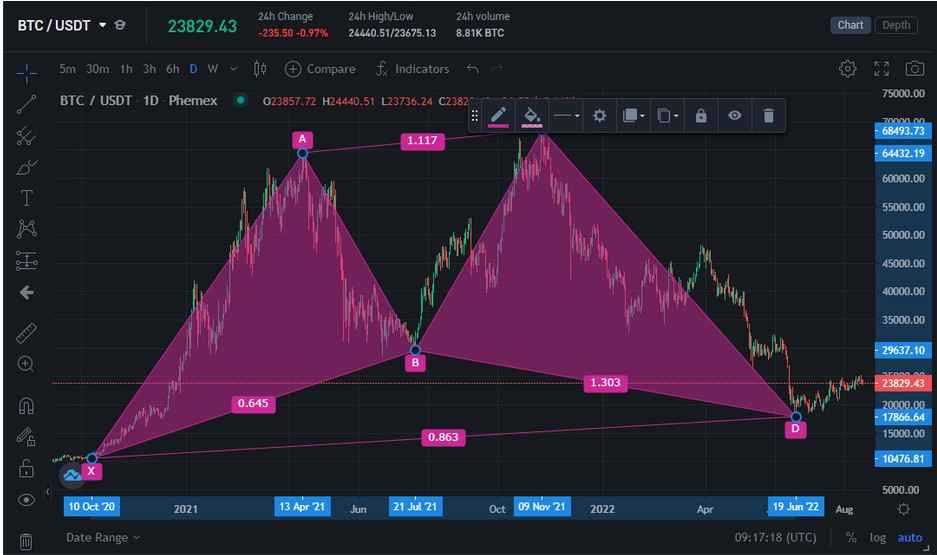 The Butterfly Pattern is identified on the daily Bitcoin chart.

However, it should not be used as a stand-alone tool because the patterns will vary. Use indicators such as RSI and StochRSI to verify overbought/oversold levels for reversal trading. The following guidelines were laid out by Bryce Gilmore at the introduction of the pattern:

The rigid structure can get complex, but a trader doesn’t have to draw the pattern perfectly because it shouldn’t be used as a stand-alone tool. No pattern is foolproof and multiple TA indicators should always be implemented to confirm trading bias.

We recommend starting with the Butterfly pattern to first evaluate a trade, and following that up with other indicators. Use stop-losses to minimize the risk and try paper trading on the Phemex testnet to put your trading strategy to the test.